Shopping for Truck Parts is all in a Day’s Work 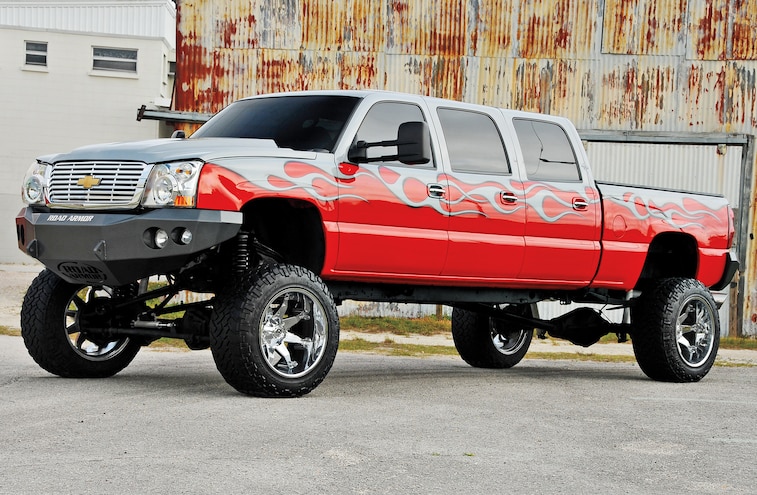 As the old adage goes, one man’s trash is another man’s treasure. In the case of 31 year-old Bubba Watts of Wildwood, Florida, it couldn’t be more accurate. His father owned one of the largest salvage yards in the area, and when Bubba was 15 he began helping his dad there at the yard. “I was constantly watching wrecked show trucks come into the yard,” Bubba tells us. “The vision of me owning one kept growing stronger.”
At the age of 22 he and his father went looking for a solid Duramax truck for Bubba to be able to drive back and forth to the yard. They purchased a ’03 Chevy 2500 HD Duramax. The price was right so they grabbed the truck and brought it home. Within the first month Bubba decided it needed an altitude adjustment. An 8-inch Fabtech lift was installed by Bubba and his friend Bruce Rigsby, but it wouldn’t stay on the truck for long. Bubba had much larger dreams for his Duramax.
A front axle and coil spring front end out of a ’07 Ford F350 was removed with the help of Eddie Cantrell and added to the Chevy. Bubba had to then purchase an 8-inch Fabtech lift for a Ford F350 from Precision Off-road in Leesburg, Florida. For the rear, Bubba added rear leaf springs and a 6-inch Fabtech lift with dual stabilizer shocks. A hydraulic assist was added to help with the steering on the newly lifted 2500. 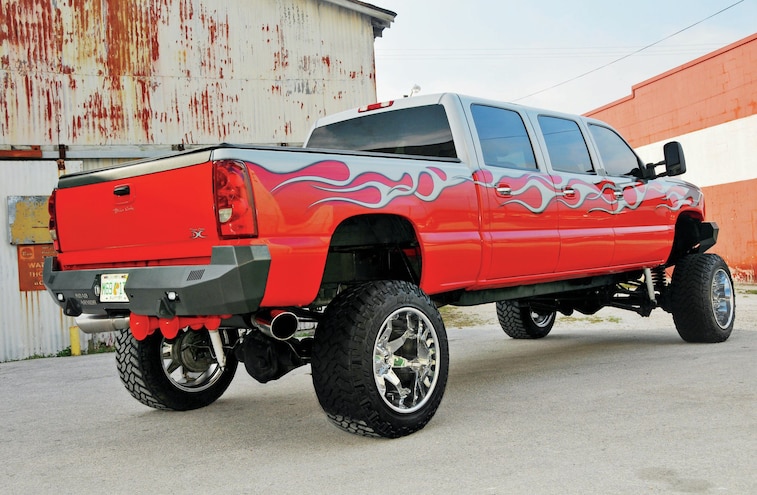 View Photo Gallery | 9 Photos
Photo 2/9   |   2003 Chevy 2500 Rear Side View
The truck was coming together, but Bubba again wanted to give his Chevy a unique touch. He searched through the salvage yard and found a ’02 Chevy 1500 cab and, with the help of his friend Alan, cut the back half off and then the frame. His 2500 was cut in half and the cab was added with precision cuts. Doors were removed and installed from a ’05 Chevy truck and metal was added so they would line up and close properly. They fish-plated the frame and added a carrier bearing along with stretched fuel and brake lines.
Once the truck was stretched, it was time to blend the exterior. Bubba took the Chevy to Dynamic Coating in Leesburg, Florida, where Danny Harris blended all the paint and added custom silver flames and powdercoated the front and rear bumpers. New headlights and a grille were added to give it a more aggressive look. A set of five Bell Nathan train horns were painted and added underneath the truck.
Bubba pulled the motor from a ’05 Chevy 2500 and added it to his 2002 along with aftermarket injectors, a Banks turbo, intercooler, and a six-gun tuner. A Banks Ram-Air intake and air filter was installed for cleaner airflow with a 5-inch Banks exhaust that branches to a dual exhaust in the rear with silver line tips. Again, digging in the yard, Bubba removed three sets of captain’s seats out of three different ’10 Chevy Silverados, which were installed in all three rows of the truck. Carpeting was purchased from Pat Sales in Leesburg, Florida, and the headliner was built by Sammy James of Lake Panasoffkee, Florida. 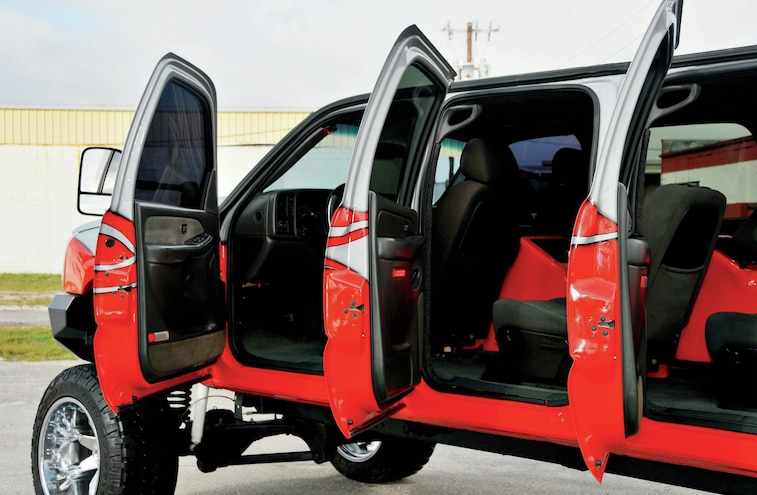 View Photo Gallery | 9 Photos
Photo 3/9   |   2003 Chevy 2500 Extended Cab
A Pioneer DVD player was mounted in the dashboard and in custom fiberglass housings built by Josh Futch in each row, and 11-inch flat-screen monitors were added. Three JL Audio subwoofers were hidden under the center console to save space. Six-inch JL Audio components were mounted in each door. A set of 22x14 Fuel Hostage wheels wrapped in 37/13.50/22 Nitto Trail Grappler rubber rounds out the build.
Bubba wishes to thank everyone who helped him through his long and unique build. Alan Solone, Bruce Rigsby, Robbie Town, James and Josh Copen, Troy Watts, and Eddie Cantrell all played a giant role in the Chevy. The biggest thanks go to his parents, his father Dale Watts Sr. and his mother Robin, for their continued support. Having a huge advantage of scouring the salvage yard for parts on the Chevy Duramax ensure the beast continually has unique additions. How many other people get to go shopping for truck parts every day at work? 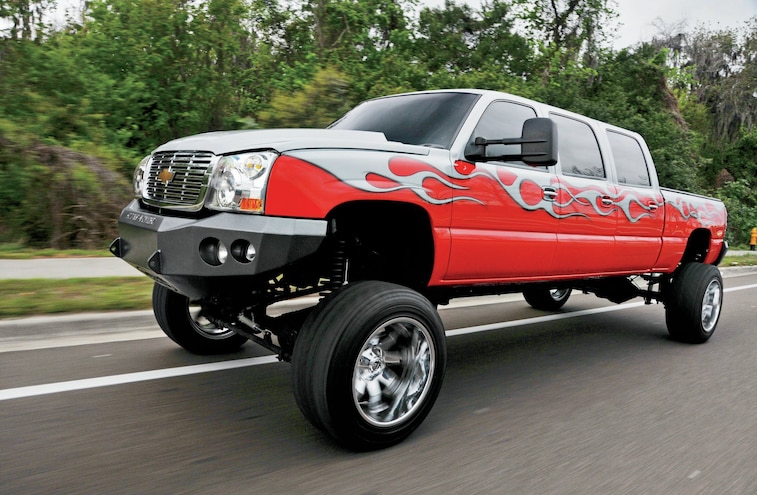