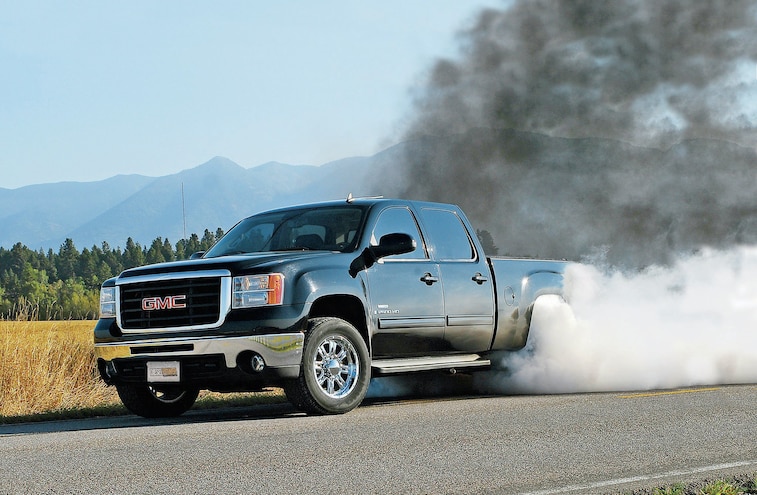 Justin Dall, owner of Advanced Diesel Works in Kalispell, Montana, was bitten by the drag racing bug in 2005 when he began augmenting his brand-new 6.0L Ford F-250. First, he flashed the powertrain control module (PCM) with a custom tune, then installed a 4-inch exhaust—and took it straight to the track. In his first event ever, Justin was the last man standing…definitely a good start.
Of course, drag racing is always more fun when you’re doing it with others who also enjoy the sport. For Justin, that person is his wife, Dani, who was driving the family’s hopped-up ’00 F-250 at that time and showed signs of having the same “need for speed” as her husband. All Dani needed was one trip to the dragstrip to become hooked on running the quarter-mile in a diesel. The ’08 GMC Sierra 2500HD seen here is Dani’s personal dual-purpose rig. Because it also has to make it to work every day, Justin took the same approach preparing this one as he did with an ’05 Sierra Dani used in 2010 to familiarize herself with racing and get valuable seat time.
The Sierra’s internally stock 6.6L LMM Duramax engine has been taken to the next level by a tweaked Maximized Performance Inc. (MPI) compound-turbocharger setup which, in addition to an S475 primary turbo, sports a Garrett PowerMax ST1 as the secondary ’charger, which provides that extra little bit of airflow. Remains of the combusted air/fuel mixture are purged through a 4-inch, through-the-muffler exhaust that’s disarmingly quiet. A FASS Platinum 150-gph lift pump moves the diesel to the injection pump that feeds the rails and stock injectors. 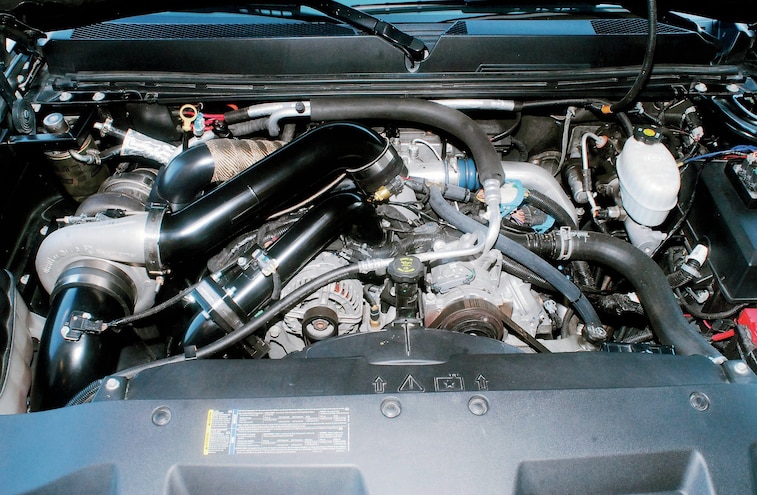 View Photo Gallery | 21 Photos
Photo 2/21   |   Under the hood, the mildly modded 6.6L LMM Duramax is highlighted by MPI’s compound turbocharger system.
Before the truck’s original Allison 1000 automatic transmission bowed under the strain of added power and weekend racing, Justin pulled the gearbox and installed SunCoast’s GMax-6-3 rebuild hardware, a 1056 torque converter, and a Mag-Hytec pan. Justin uses EFILive tuning software for programming engine and transmission operational commands into the factory ECU.
The only interior changes are the addition of Isspro Performax gauges in A-pillar pods, which are just a glance away whenever Dani wants to make sure all systems are functioning normally. As an Amsoil dealer, Justin makes sure it’s the only lubricant in this truck
The Sierra’s front end is reinforced with stout Fabtech tie-rod ends, as well as PPE pitman-, and idler-arm supports to help prevent the notoriously sketchy stock steering from checking out around the 60-foot mark and leaving the front wheels looking cross-eyed.
To get as much power to the ground as possible and improve the launch, Justin lowered the truck 3 inches at the back and 2 inches up front. Cognito antiwrap bars are tucked underneath and almost out of sight, and keep the rear axle from winding up when Dani drops the hammer. Kumho Ecsta tires (STX 285/65R18) are set on 18x9-inch Ultra Predator wheels, and the truck still sports the stock 3.73 gears. 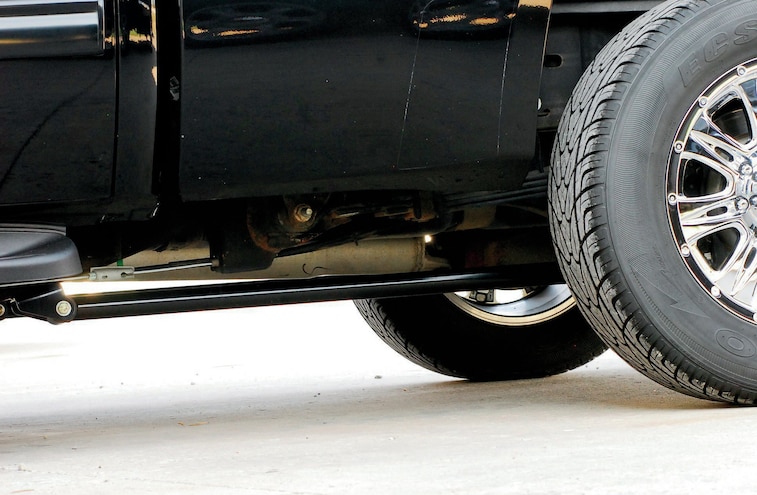 View Photo Gallery | 21 Photos
Photo 3/21   |   With the truck lowered 3 inches in the rear and 2 inches in the front, Cognito traction bars help get power to the ground and keep the axle from winding up during launches at the track.
With a nearly smokeless exhaust, a car seat and kids in the back, and a camper or utility trailer often tagging along behind it, there’s very little to give Dani’s Duramax away as anything other than stock. It’s still quiet and comfortable inside and has the manners and mileage to go on long road trips. However, this rig’s mettle is fully manifested when it’s strapped on the dyno’s rollers at Advanced Diesel Works, where it made an official 567 hp and 1,061 lb-ft of torque.
Dani’s goal at the track is to eventually get her truck into the 11s. Right now, it has a best e.t. of 12.95 seconds (at 109 mph) in the quarter-mile and 8.23 seconds (at 86 mph) in the eighth-mile.
As with many part-time race rigs, this Sierra has successfully achieved the goal of balancing weekend race performance while still being able make the Monday morning commute.
“It’ll never really be done,” Justin says. “There will always be something else to do. For us, the real limiting factor will be how much we can do with a single CP3 injection pump. We’d like to break the 600hp mark and get the truck into the 11s in the quarter-mile. So, there’s plenty of work left to do over the winter for next year.” 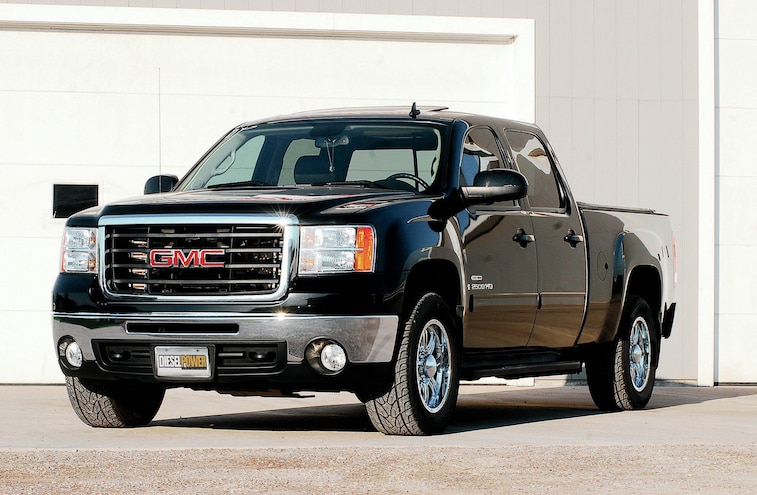 - OF
By Brian Hollingsworth
23 Articles