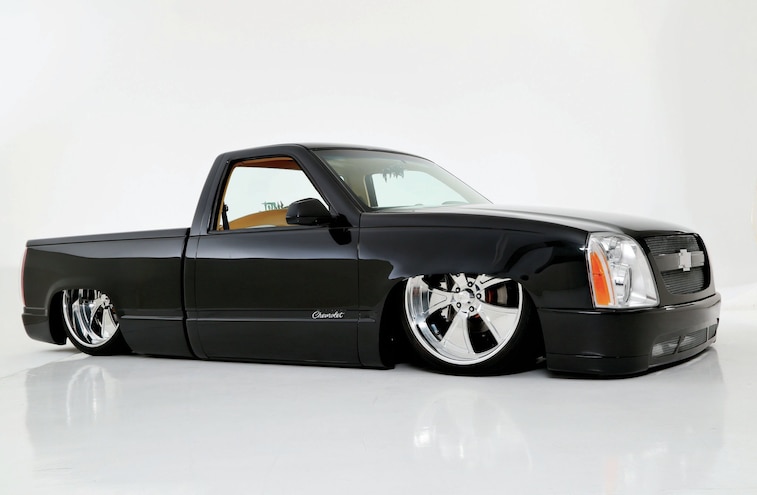 We wanted to do something a little different for this special feature, so rather than interviewing and rewording this story, we’re bringing it straight to you from the owner himself. Here’s the tale of how Brian Hill’s ’89 Chevy truck “Engineered To Win” came to be. This was not just one man’s journey to build the “perfect” truck but a team effort that took truck loads of patience, dedication, and perseverance—but as you can see here, the end result was worth the wait!
Brian Hill:
“In the beginning I never actually set out to be ‘that guy.’ We’ve all read about him in this very magazine; the guy who wants to start a modest build, only spending a reasonable amount of money, staying on budget. He has simple plans, a nice truck that lays body on some big wheels. Then, a single idea totally alters the way the course of the build goes. Suddenly, you’re surrounded by a sum of crazy ideas and bold modifications, that when assembled and painted, are going to make up something very special. Then, all of a sudden you’re ‘that guy’ who started out with a plan for a simple build to cruise, and four-plus years later, you end up with one of the more radical builds seen on the recent show circuit and a completely custom one-of-a-kind build.
“So, how the hell did I get here? What was the single idea that turned the build, you ask? Well, stuffing those 26s under the bed’s sheetmetal with a huge body drop, that’s what. See, we wouldn’t be able to squeeze them in there, if we didn’t build an IRS to camber those bad boys in just enough to clear the curve in the sheetmetal. And then, all of a sudden we have ... ahem ... a full custom back-half with cantilever hydraulics, and, of course, the front frame has to match, right? And, since we have suspension that looks like a crazy futuristic erector set in the bed, we need hand-built custom sheetmetal to surround all that beautiful work, right? And, you already know that with sweet bed sheetmetal that equals some equally sweet engine-bay sheetmetal ... and the snowball effect took full form. So now you can see how this all began to add up. 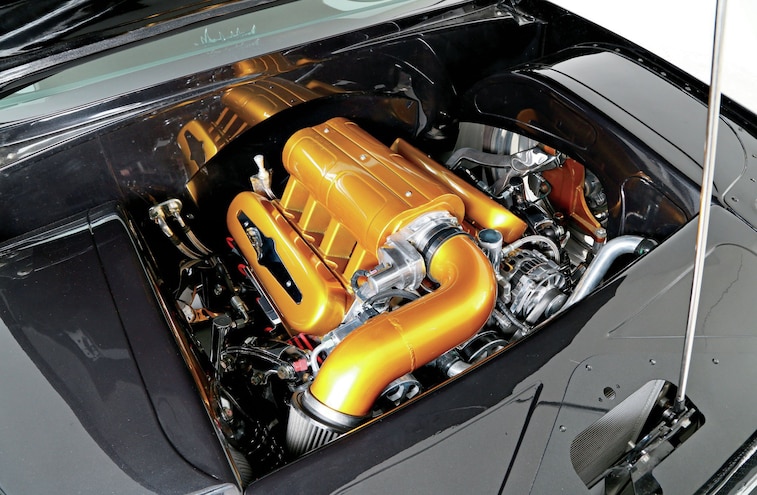 View Photo Gallery | 10 Photos
Photo 2/10   |   1989 Chevy C 1500 Truck Bed 1
“About the time when it came to deal with the engine, I was just flat out done. I’d gone about 10 times over my initial budget of having a ‘cool truck’ to cruise, and was way in to the ‘I can never tell my mom how much this all cost’ territory (sorry, mom, if you’re reading this). But right about that time, builder Aaron Iha helped me see the light in a very long tunnel. You see, this was Aaron’s very first truck that he started when he was just 16, and was also his first full-frame build. After opening up his own chassis/custom shop and starting a family, Aaron’s truck sat in the back of the shop collecting dust. Starting with this truck and bringing it back to life meant a lot to both of us, so when times got hard, Aaron explained it like this: When you build a house and really pimp out the bathroom and kitchen, would you then sleep on a futon? It just doesn’t work that way. Everything has to be cohesive and make sense. We’re building art, and the full story has to be told! This is the vision he had, and I’m thankful for that, now. As a first-time builder, I would have never been able to see things that far ahead and plan for the end goal—a masterpiece. I was just concerned with all the lies I’d have to tell my mom and hope she never reads this article. 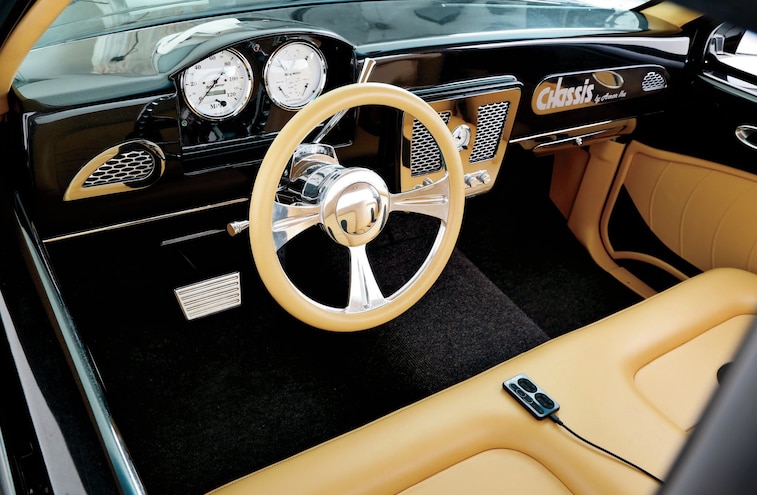 View Photo Gallery | 10 Photos
Photo 3/10   |   1989 Chevy C 1500 Interior
“So from then on, we really had a team effort approach into churning out a true work of art from grille to taillight. But still, like I mentioned, things don’t always make the most sense in the midst of it. I’m the genius who thought it was a good idea to chop the top of a single-cab truck, all while being 6 feet 7 inches. I’ve had many people say, ‘You did what?’ when I mention that we lowered the roof 2 inches. But, really, that was just another engineering feat in the many hurdles that Chassis By Aaron Iha had to tackle for me. (The answer to that conundrum, by the way, is to build a bench seat from scratch and make it any height you want, and make a sheetmetal dash that is 6 inches more shallow than stock, giving my knees the necessary breathing room). Aaron mentioned that he now knows what its like to build a truck for Shaq. 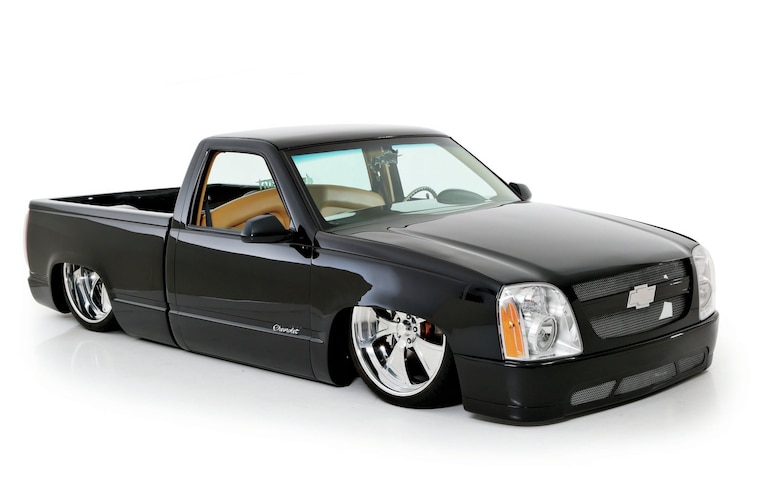 View Photo Gallery | 10 Photos
Photo 4/10   |   1989 Chevy C 1500 Front Side View
“So, here I am, the guy who never set out to build a truck this crazy, the guy who we are all too familiar with. I hope you enjoy looking at it as much as I do and if you ever see me at a show and want to talk trucks, I will talk your ear off all day and night about it if you let me!”
Brian wanted to give a very special thanks to Aaron and Christine Iha for all of their guidance, support, and patience throughout the build. For more information on the many scratch-built pieces to this amazing puzzle, make sure to check out our “Inside the Build” section below.
Inside the Build
Year/Make/Model: 1989 Chevy Single Cab
Owner and City/State: Brian Hill; Anaheim, CA
Engine
Engine/Performance: 6.2L LS3 from Chevrolet Performance, Eddie Motorsports billet front drive, relocated coilpacks and one-off sheetmetal valve covers, custom aluminum Ford 9-inch IRS, aluminum driveshaft, built and installed by Chassis by Aaron
Body
Paint: Chopped top 2 inches, custom body-drop (part frame, part traditional), rear window moved down to sit parallel with the bed, ’99 Escalade hood and fenders, Denali Yukon headlights and taillights, one-off handmade grille, shaved everything, complete custom bed, custom firewall and engine bay covers, shaved underside of hood, over 150 body mods so it’s impossible to list them all, custom Black Diamond Tri-Coat painted by Buck Wild
Interior
Stereo: Complete one-off interior built by Chassis by Aaron, custom sheetmetal dash, modified Vintage Air unit, one-off custom bench seat, Ultra Leather wrapped by Rogelio’s Upholstery, Alpine head unit, Alpine 12-inch shallow mount subwoofer, Polk Audio components, wired by Kent Fletcher
Chassis
Suspension: Complete custom suspension and frame designed and built by Chassis by Aaron, custom IRS and floating third-member, custom cantilever hydraulics and coilovers at all four corners, hand-built control arms, hand-built core support, body mounts, etc. (every single part, piece, nut and bolt is custom on the frame and suspension), Fox Shox, Wilwood six-piston brakes
Wheels & Tires
Wheels: 24x9.5 and 26x10 Bonspeed
Tires: 275/30/24 and 305/25/26
Special Thanks From Owner: “Aaron and Christine Iha for the amazing build, my girlfriend Karen (she’s a way better detailer than I am) my sister Stacey, my mom, Stan and Brooke Butler, Jeff Devoe, Joe Stupor, my mentor Oderus Urungus, and last but not least, my Aftermath family!”