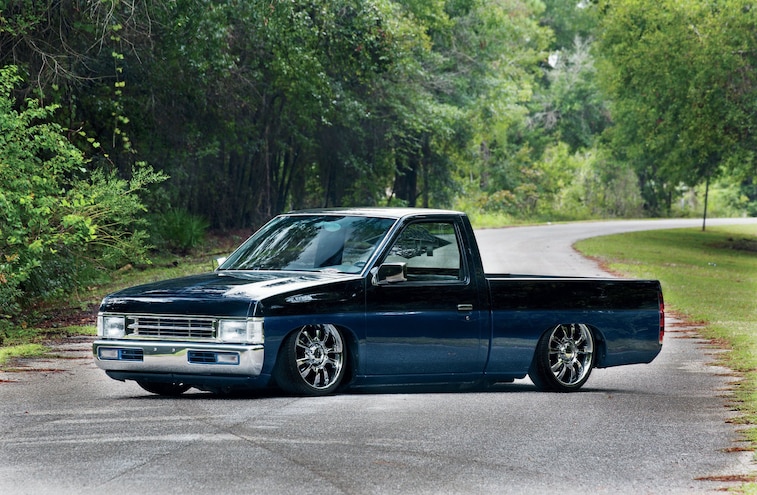 Vic Figueroa is not your typical mini-trucker. Vic is a family first type of guy, but that doesn’t stop him from thinking about what he is going to do next to this insanely detailed Nissan. His club Severed Ties has a saying for Vic, 0-100. We can only assume they are talking about his positive outlook on everything and everyone he encounters.
Life for this pickup started as a standard ’97 Nissan Hardbody. After Daniel Smith from SmithWorkx got his hands on Vic’s Nissan the project quickly began to take shape. Drop spindles and a sway bar up front coupled with Slam RE-6 ’bags and KYB shocks planted the nose of this Hardbody where it needed to be. Daniel whipped up a custom notch and 4-link out back and finalized it all with an Accuair management system. Vic proceeded to lace up the suspension by adding a set of 18x8 KMC Skitch wheels sitting on 215/35R18 Delinte rubber. 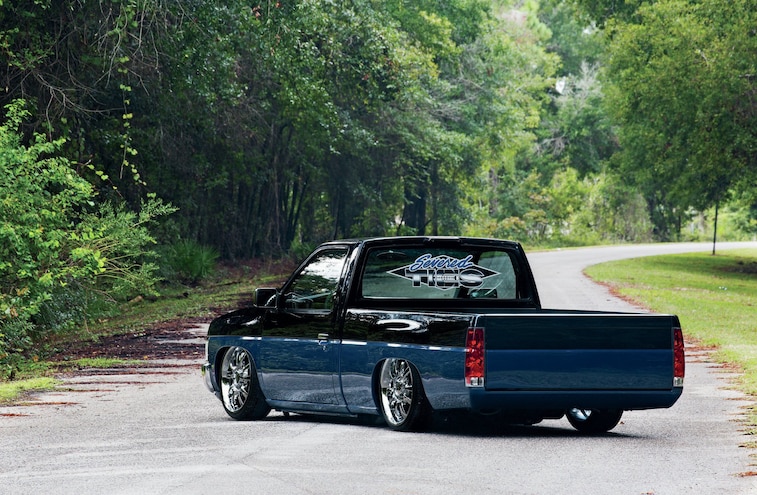 View Photo Gallery | 7 Photos
Photo 2/7   |   1997 Nissan Hardbody Rera Side View
Most builds get lost in extreme body mods, but Vic wanted his build clean and classy. The tailgate was shaved by Vince “Ven” Ferraro and a Grant Kustoms roll pan was added to delete the bumper. Ven proceeded to shave the wiper cowl, add front fender tubs, and rewire the entire engine bay so that clean look could follow throughout the build. Finally a ’95 Pathfinder grille and headlights were bolted up. Prior to the pristine paintjob being laid down Vic had the bed sprayed with Line-X. Keeping with the family first theme Vic had his Uncle Freddy spray the PPG Cobalt Blue and Black, which incorporates a Blue Pearl. A Standox clearcoat brings out the shine. When we say this truck shines like a diamond (no pun intended) we really mean it.
The engine bay on the pickup is no sleeper when it comes to cleanliness. The simple theme is carried into the motor compartment thanks to plenty of billet, powdercoat, and good ol’ fashioned elbow grease. Vic also took it a step further and had some pinstriping laid down on the fender tubs. An Optima RedTop battery tied in with the JL wiring components ensure this truck won’t be losing power anytime soon. Stainless steel bolts and hood shocks were added for extra detail. The hood brackets, radiator, alternator, and pulley brackets were done in Line-X. When you see this truck in person and really look at it you can’t help but be transported back to the glory days of Mini Truckin’. Simple and clean is the name of the game, and Vic nailed it without even one spec of chrome! 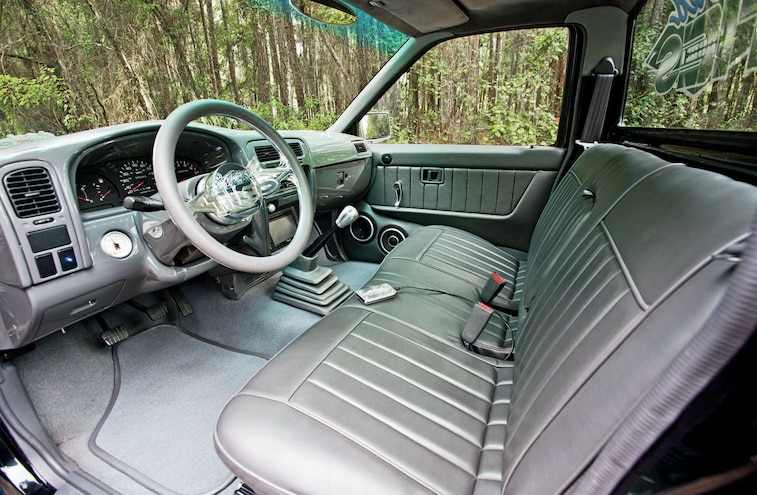 View Photo Gallery | 7 Photos
Photo 3/7   |   1997 Nissan Hardbody Interior
As it relates to the interior of the Diamond Life, Vic knew just the theme he was going for. The dash was completely smoothed and painted by Ven. They also recessed the air gauge into the lower part of the dash. Vic called upon Interiors by Jesse for the other key aspects of the cabin, including new carpet, door panels, headliner, and lower dash pieces. Jesse also reupholstered the bench seat. Vic himself handled the stereo. At the center of the AV setup is a Pioneer double-DIN head unit. A JL Audio Amp powers the six mids and tweeters, which keep the sounds sharp and crystal clear.
Building a killer mini these days doesn’t have to break the bank. We believe that when the forefathers of mini-truckin started, their goal was always to keep things clean and simple. Until next month, keep on mini-truckin.
Vic would especially like to thank his wonderful wife and partner in crime, Dee. Additionally, he would like to thank Vince “Ven” Ferraro and Daniel Smith at SmithWorkx. Lastly, Vic wanted to thank his brothers and sisters in Severed Ties for their continued support, because, after all, family is first 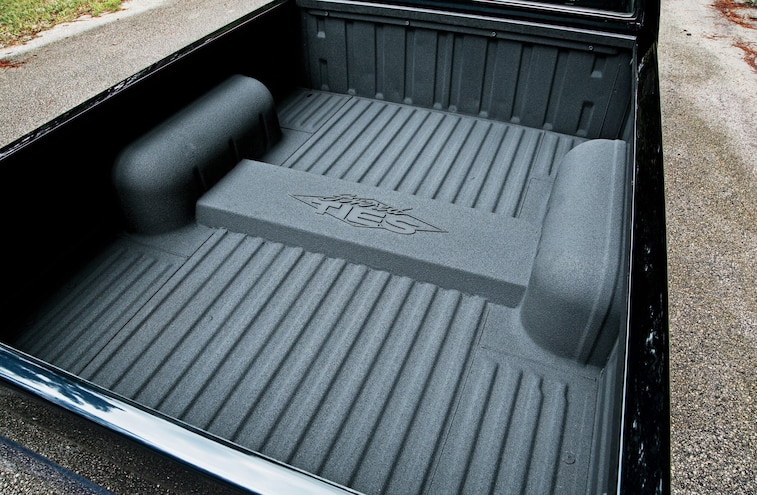 - OF
By Jason Ballard
3 Articles