Introducing A ’67 F-100 Ford with some unexpected twists 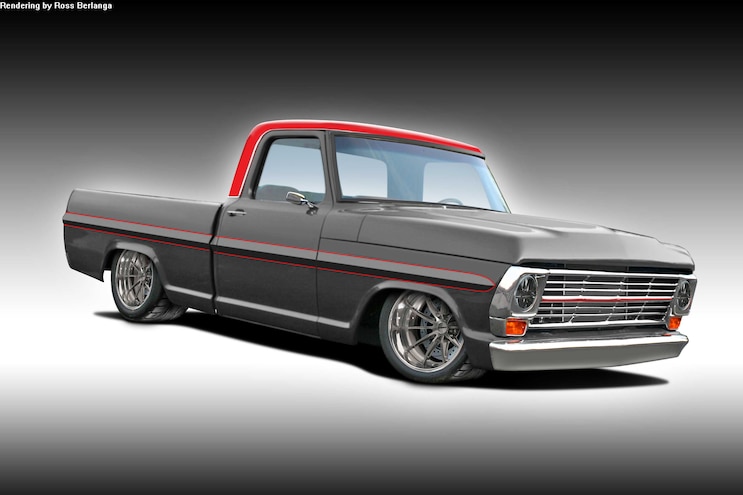 Rendering by Ross Berlanga
It’s no secret that the highly popular ’67-’72 shortbed Chevy C10s are drying up, getting both more expensive and harder to find in good shape. The longbeds of the era are also becoming pretty pricey, even in marginal condition. So what’s the next big thing in classic trucks? If recent industry trends are an indication, the ’67-’72 Ford F-100s, also affectionately known as “Bumpsides,” are starting to come on strong, yet remain affordable in comparison to their Chevy counterparts. 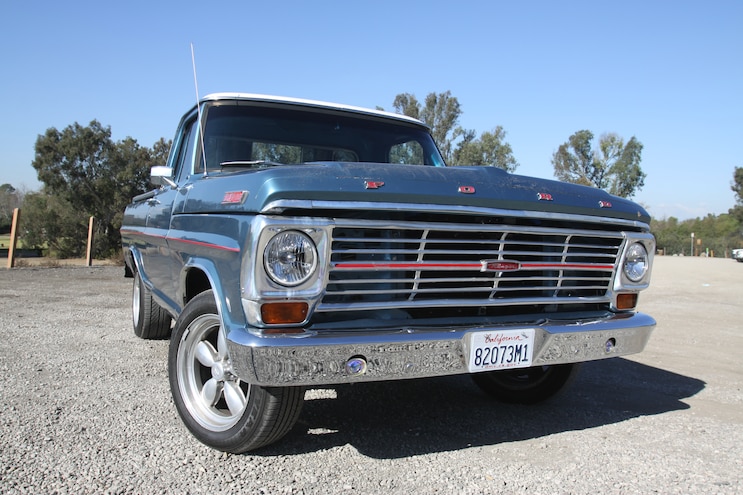 View Photo Gallery | 13 Photos
Photo 2/13   |   One of the things we liked about Project Bumpside was the cool ’69 Ranger grille.
These underappreciated Fords are ruggedly constructed, feature a rear solid axle and independent I-Beam front suspension, benefit from solid aftermarket support, and are relatively easy to build. Bumpsides came from the factory with a variety of engine and transmission combinations, but thanks to a huge engine compartment, are candidates for all types of engine swaps. This body style also sports big wheelwells and look pretty good dropped with a proper wheel and tire package.
Maybe we love these trucks because they aren’t as common as the C10s, or maybe we just like being different, but whatever it is, we’ve wanted to build one our way for years. With the idea bouncing around in our heads for what seems like forever, we’ve always had a clear picture of how we’d build one. We’d go more daily driver than show, and we’d also go with steel spring suspension with more of a Pro Touring feel over something laid out and with ’bags. It would have big brakes and be comfortable enough for long cruises. We’d want something that comes across as subtle, speaking more with its handling and performance than with a wild paintjob. 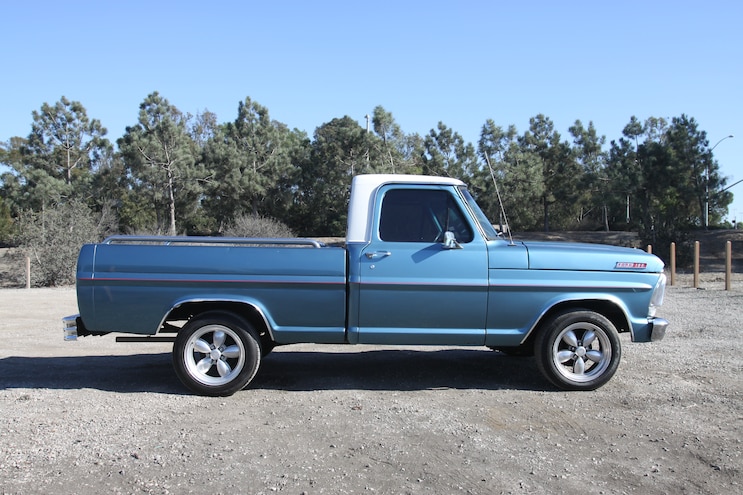 View Photo Gallery | 13 Photos
Photo 3/13   |   Project Speed Bump Part 1 Side
Yep, we know exactly how we’d build one, but would we ever get the motivation to pull the trigger? While casually talking trucks with industry icon Gale Banks, we mentioned our love for the Bumpside trucks and what we’d do if we ever went crazy and tried to build one. After more than a year of casual conversations about how we could build a really cool one together, Gale said, “Go crazy.”
And with those words, Project Speed Bump was born. As it turns out, Gale was looking for just the right project for the Banks SEMA booth. Looking to showcase his new 630T 3.0L turbodiesel V-6 and GM 6L90-architecture–based transmission combo, and he liked the idea of our Bumpside build. With the endorsement and partnership of Gale Banks, we decided to commission a rendering and reach out to some of our industry friends to see who else would be interested in joining the party. 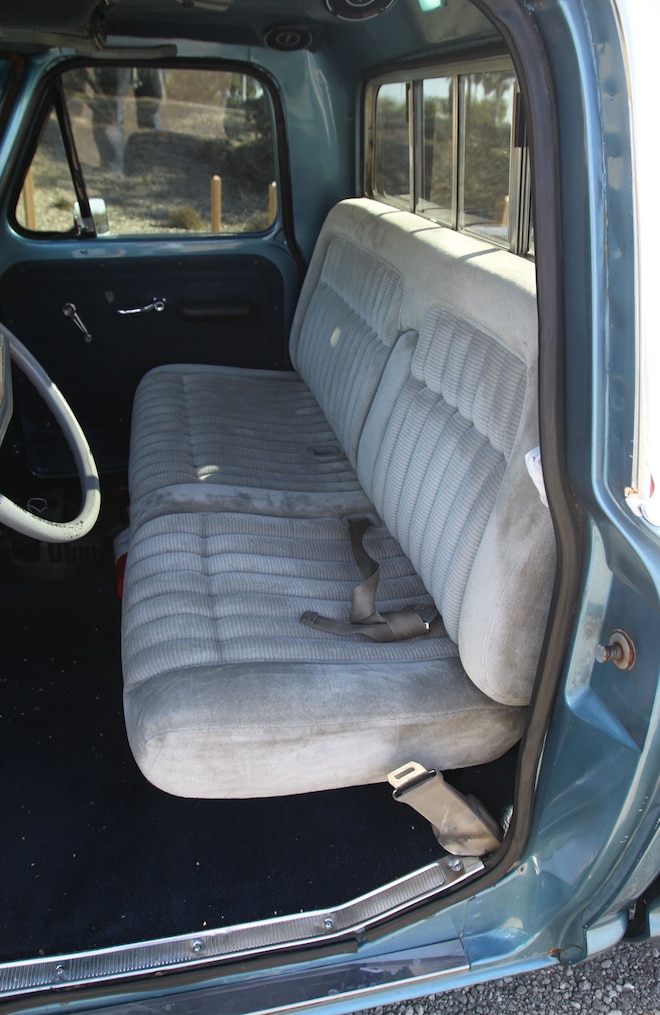 View Photo Gallery | 13 Photos
Photo 4/13   |   Anyone need the seat out of a ‘90’s GM 1500?
A plan was loosely formed on what kind of things could be done, and the more we talked about it, the more we liked the direction we were headed. Running the diesel would allow us to have big block torque, but small engine fuel economy. With more than 300 hp and 500-plus lb-ft of torque, we should still be able to get close to 30 mpg on the highway and break into the 12s in the quarter. In a contrast to the typical Windsor and Mod motor swaps, or even the popularity-gaining 5.0L Coyote, our diesel will be an unexpected setup that could make for a great conversation starter.
After sharing our vision with our friends in the industry, we had immediate interest and commitments from some major players. Companies like LMC Truck, Nitto Tire, Painless Performance Products, Dynatrac, Eaton, Off-Road Evolution, AMSOIL and Wilwood jumped in right away. LGE-CTS in San Dimas, California, wanted to partner with us once again on the paint and body, and soon our list of partner grew to include RideTech, Forgeline, Deaver Spring, and Dustless Blasting. With such an assembled cast of industry all-stars, we pulled the trigger on a truck we had been watching on Craigslist for a little while. 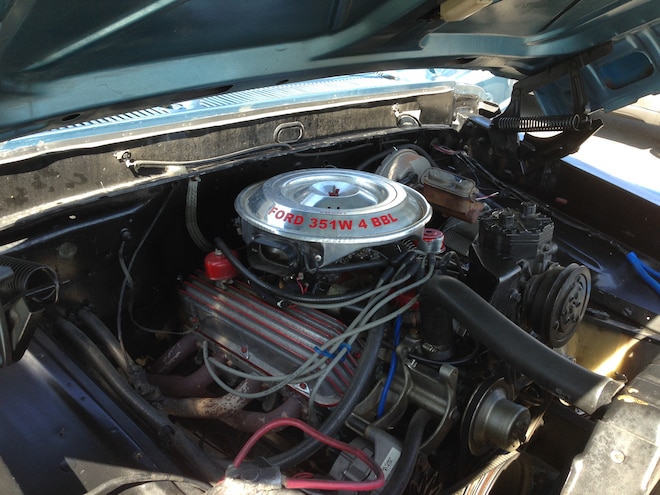 View Photo Gallery | 13 Photos
Photo 5/13   |   The mid-‘80’s 351 Windsor that powered project Speed Bump when we bought it started life in an E-Series van.
What we ended up with was a ’67 F-100 that was running and driving with a mid-’80s 351 and C6 out of an E-Series van. The truck ran and drove great, and from 10 feet away, looked pretty good. Up close we could see that there was some rust lurking under the serviceable paintjob. One bonus with the truck was the Mercury Grand Marquis front suspension that came in the bed, making our frontend choice an easy one. We also like that it came with the way cool ’69 Ranger grille.
Once the paperwork was handled, we immediately got to work transforming a perfectly good running and driving truck into a really expensive rolling paperweight. Check out part 2 as Project Speed Bump gets its suspension upgraded here: Project Speed Bump Part 2 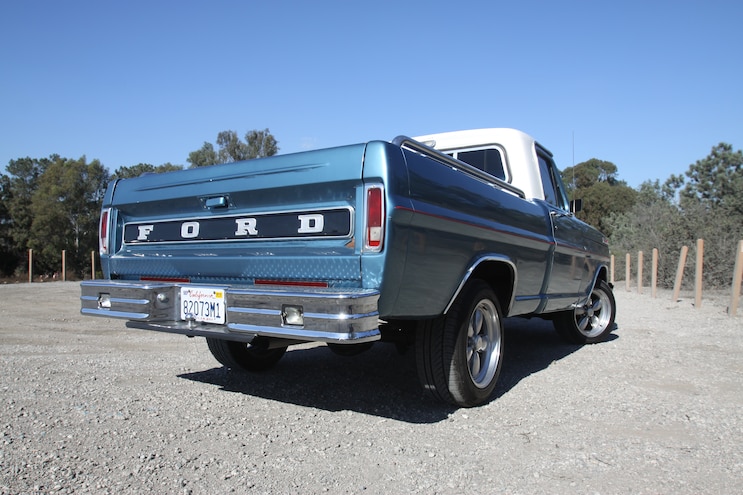 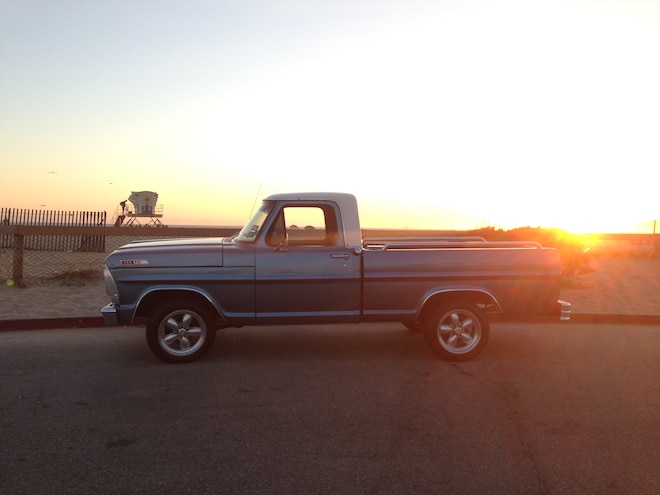