Yes, Hot-Rodders Will Put a 4BT Cummins in Anything 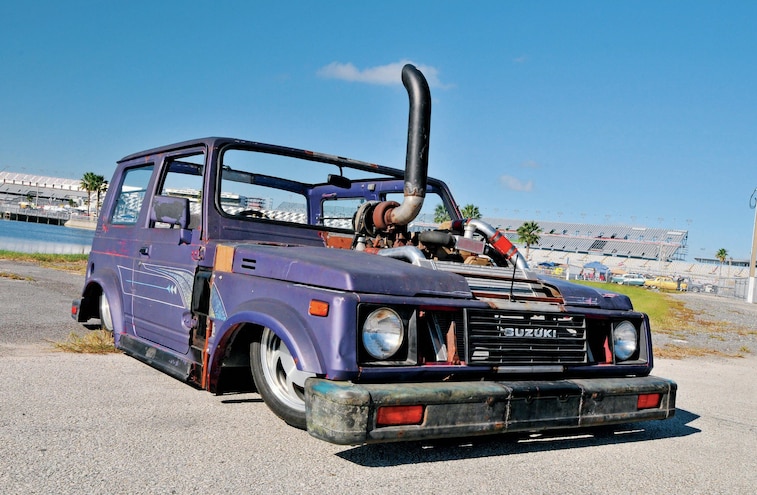 One of the biggest challenges of building a one-of-a-kind diesel project is the lack of a blueprint. Then again, that may also be its biggest advantage. For those of us who would rather not follow directions, creating a ride with no preconceived notions could be the perfect build. The freedom to depart from standard conventions allows you to personalize your ride exactly to your tastes.
David Taylor from Oxford, Florida, set out to do just that and, as you can see, Suzuki’s four-wheel-drive Samurai plays an important role in the process. As a child, one of David’s earliest memories was traveling in the family Samurai back in the mid-’90s. It started a trend, and since then David has owned six Samurais, along with multiple other Suzuki products, including his current daily driver: a ’94 Suzuki Sidekick. 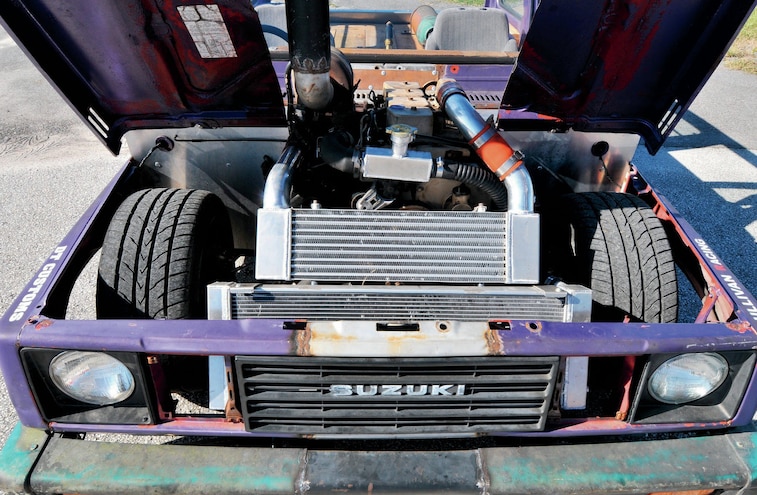 View Photo Gallery | 12 Photos
Photo 2/12   |   Under (and out of) the hood, the 4BT Cummins has plenty of sideways room in the widened engine compartment.
David is a wildland firefighter, one who moves through woods where street-bound fire crews dare not venture. When not battling blazes, he enjoys building lifted off-road vehicles. When it was time for something new, he decided to turn this ’86 Samurai into a rat rod…with a twist! His ride would be powered by a diesel engine! Selling one of his other projects he just didn’t have time for—a 2½-ton military truck—David was able to purchase the engine, formerly the powerplant of a ’93 bread truck. The 4BT Cummins turbodiesel came with a factory intercooled H1C turbocharger.
The heavyweight engine caused the first departure from the norm, since nothing on the Suzuki chassis was strong enough to hold the 800-pound diesel. David began constructing the heavy-duty frame using a Chevrolet S-10 front end he mated with a rear section fabricated from 2x4x3⁄16-inch steel. He also designed a triangulated four-link to hold an S-10 rear axle. Since air suspension was part of the plan, the front end uses modified lower control arms and Speedway Motors tubular uppers to allow the body to rest on the ground. Although they are hard to see, a set of C4 Corvette “Sawblade” wheels makes the chassis a roller, using 17x9.5s up front and 17x11s in the rear. Monroe Sensa-Trac shocks snub all four corners.
The final step was creating additional crossmembers and fabricating motor mounts for the Cummins. David ditched the four-speed that came with the bread truck and went with an M5R2 five-speed overdrive manual transmission sourced from a Ford F-150. About the only modification to the engine so far is turning up the fuel on the injection pump, with future plans calling for a 3,200-rpm governor spring and a Stage II fuel pin for a few additional horses. The straight-through, vertical exhaust stack is a bit loud but, concentrating on the essentials, it was free and it works. David estimates the current power is about 120 hp with approximately 275 lb-ft of torque. The Chevy S-10 ZR2 rear end, equipped with disc brakes and positraction rear, will soon have the tall 3.73 gears replaced with a more appropriate Ford 9-inch fitted with a 2.50 or 2.70 ratio gear. 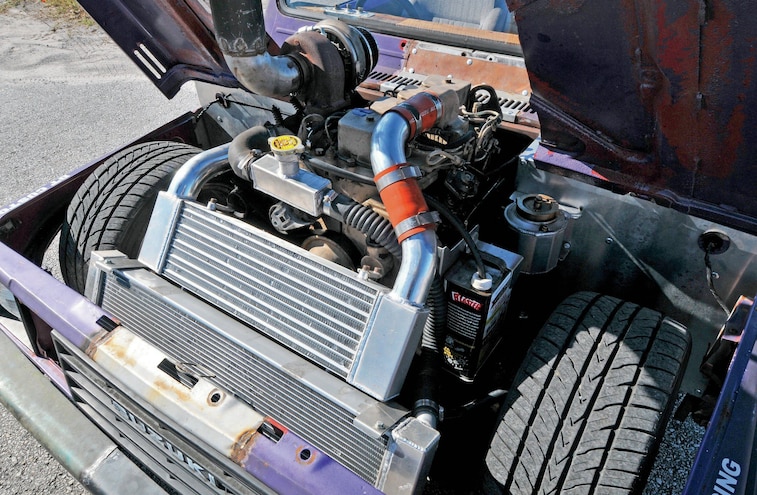 View Photo Gallery | 12 Photos
Photo 3/12   |   The radiator and intercooler are held in place with custom aluminum brackets. The owner-fabricated reservoir tank was mounted at the highest point to eliminate air pockets.
With the chassis and drivetrain complete, David began the next phase of fitting the tiny Samurai body onto the much wider chassis. He smiles when he says, “I never thought I would go this far, widening the body by 17 inches and adding 7 inches to the nose in order to get the wheels underneath the sheetmetal.” A second Samurai body gave him the extras he needed: the grille, windshield frame, cowling, and rear doorsill. In fact, the extra body width had some unexpected advantages, since he did not have to narrow the rear axle and, when the truck is slammed to the ground, he can still turn the front wheels without any interference.
Speaking of slammed, the air suspension system on the truck is also unique, dispensing with electrically operated switches and a reserve tank. It begins with an antique fire extinguisher bottle mounted behind the seats that disguises a 40-cubic-foot nitrogen tank pressurized to 2,200 psi. One refill goes a long way, and it is refillable at the local welding shop. Air Lift D2600 bags are used in the front with D2500s in the rear, filled using ½-inch lines. The Little Larry’s FOURPLAY valves are manual, so there is no need for power. Everything can be operated with the engine off.
Moving inside, the first obvious departure from the norm is the righthand drive, stemming from the time when David worked on a couple of Nissan R32 Skylines. He loved the startled expressions on people’s faces when they were passed by a righthand drive vehicle. He figured it would be fun and adapted a Chevy C-10 steering box to fit. 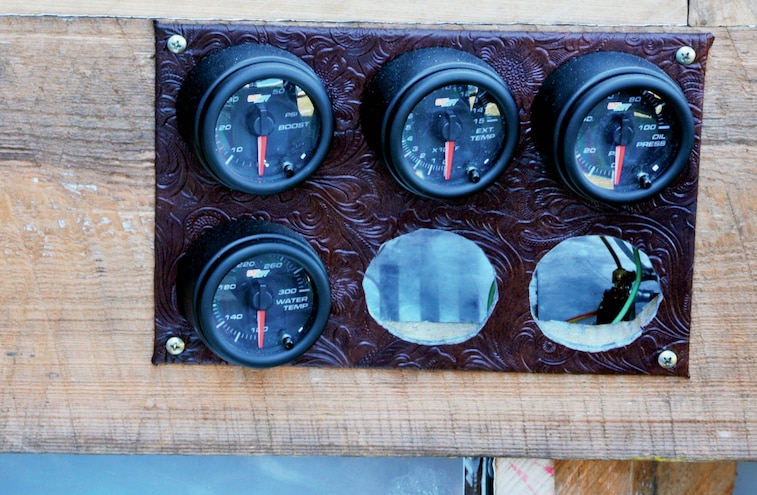 View Photo Gallery | 12 Photos
Photo 4/12   |   Custom Gauge Panel
As you can see, the entire interior is made from 1-inch-thick recycled western cedar. The Grant steering wheel has a quick release to ease entry and exit, and immediately in front of the wheel are tiny, handmade filler caps for the remote brake and clutch reservoirs. The dash has a partially completed package of instruments along with a military 2½-ton glovebox cover—all that remains of the military truck that was sold to purchase the engine. Since David’s father was also a volunteer firefighter, the family tradition is reflected in the fire-related accents inside. They include the huge shifter, which used to be a pump handle from a vintage backpack pump used for wildland firefighting. For the perfect finishing touch, David liberated the bucket seats from his former daily driver, a ’94 Suzuki Sidekick.
David and his wife Kalan drove the new creation for the first time to our photo shoot, braving some unseasonably cool Florida weather in the process but still enjoying every mile. How badly did the new truck hurt David’s budget? The cost for the parts-car body was $400 10 years ago, and he estimates he’s spent another $2,000 since then, keeping costs down by doing the work himself and bartering for the parts he needed.
While it may be complete, David says, “It’s a rat rod and will probably never be finished!” Special thanks go to David’s father Danny, his wife Kalan, his brother Daniel, and his good friend Dave for their help in creating his one-of-a-kind dream ride. 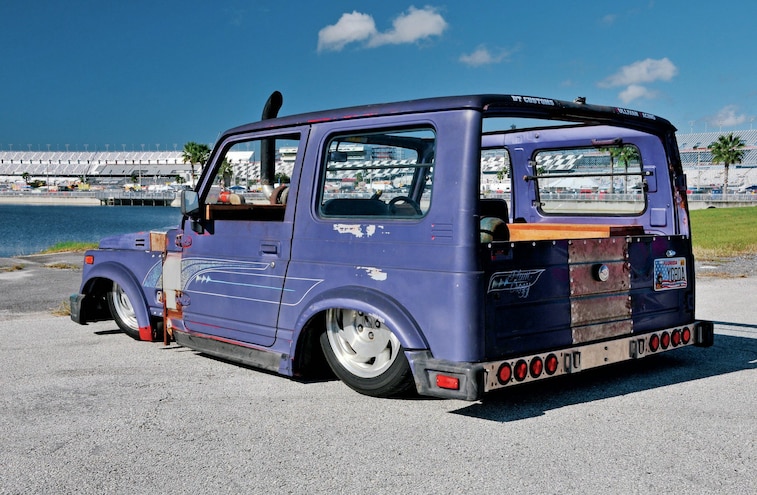 View Photo Gallery | 12 Photos
Photo 5/12   |   Lots of additions are still planned for the Samurai, not the least of which include windows, a tailgate, and a two-piece roof—all currently in various stages of completion. The air suspension puts the rocker panels on the ground, and the widened body allows the front wheels to turn without interference, even when slammed.
Fast Facts
Year/Make/Model: 1986 Suzuki Samurai
Owners: David and Kalan Taylor
Hometown: Oxford, Florida
Odometer: That info was lost a long time ago!
Engine: Stock 3.9L 4BT Cummins I-4 salvaged from a ’93 bread truck
Air: Holset H1C turbo with intercooler
Fuel: VE injection pump turned up and fed by an 11-gallon custom aluminum fuel cell mounted between rear framerails
Exhaust: The stock manifold was flipped and a 3.5-inch-diameter vertical stack was built by the owner
Horsepower: 120 hp at 2,300 rpm
Torque: 275 lb-ft at 1,600 rpm
Transmission: M5R2 five-speed manual
Tires: 245/40R17 Sumitomo (front) and 275/40R17 Sumitomo (rear)
Wheels: Corvette C4 “Sawblade” rims, 17x9.5-inch front and 17x11-inch rear
Suspension: Modified lower control arms and Speedway Motors tubular uppers with 2-inch drop spindles up front; an owner-built triangulated four-link holds the ’00 Chevrolet S-10 ZR2 rear, fitted with disc brakes and positraction; Air Lift D2600 bags go up front and D2500 versions suspend the rear, along with Monroe Sensa-Trac shocks all around
Fun Fact: It’s not hard to operate the righthand-drive setup. The transmission has a normal shift pattern, but it’s your left hand that’s doing the shifting. The throttle pedal is still on the right side.
2nd Fun Fact: “All my friends thought this would be a project left unfinished in my garage, but I proved them wrong and finished it in 13 months,” David says. 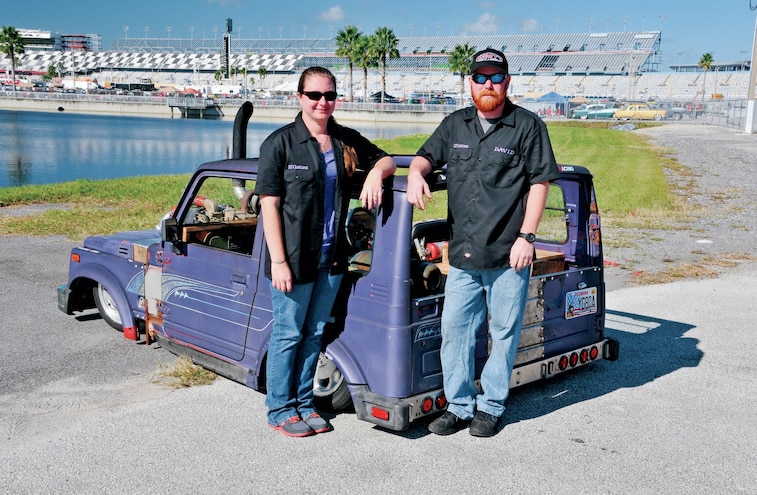