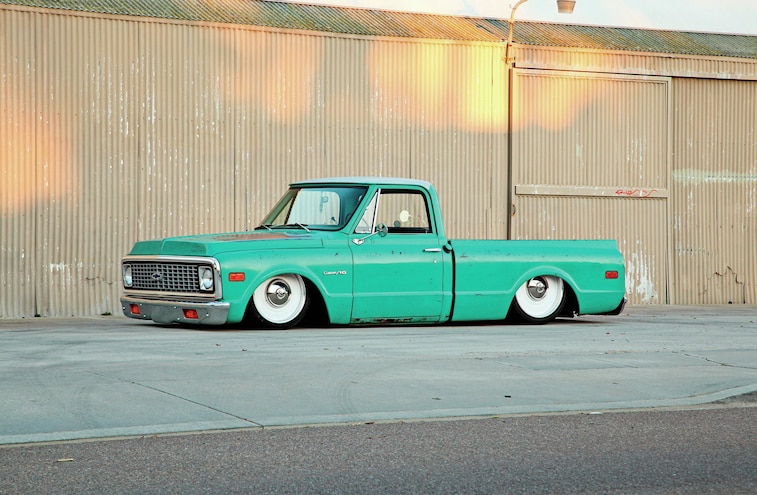 Oftentimes when we get the tech sheet back from the owner of a truck we recently shot, it leaves a lot to be desired. Missing parts and mods, along with little or no backstory make for a boring story, and we inevitably end up doing a phone interview with the truck owner to get enough information to write a decent story. This was not the case with Jason Reich and his ’71 C10. He gave us a ton of information and even took the time to put it into story form so we decided to just let him tell you about the truck himself.
“I had a ’72 C10 listed for sale on eBay in June of 2012, and had planned to take the money from that sale to buy a ’73 shortbed to build up as a shop truck for my business, Dead Air Garage. On a whim I cruised through the eBay auctions and stumbled across this ’71 C10 shortbed. Just as my truck sold, I bid on the ’71 and won the auction. The truck was an original paint, one-owner C10 shortbed. It was a factory V-8 with three-on-the-tree. When it arrived, the condition was much better than I had hoped! The only rust was in the rockers, which is purely cosmetic, and since it’s original, I just left it as it was. It was exactly what I was looking for, a factory medium green original paint shortbed C10. I started to hatch a game plan. First on the list was getting it into daily driver status. 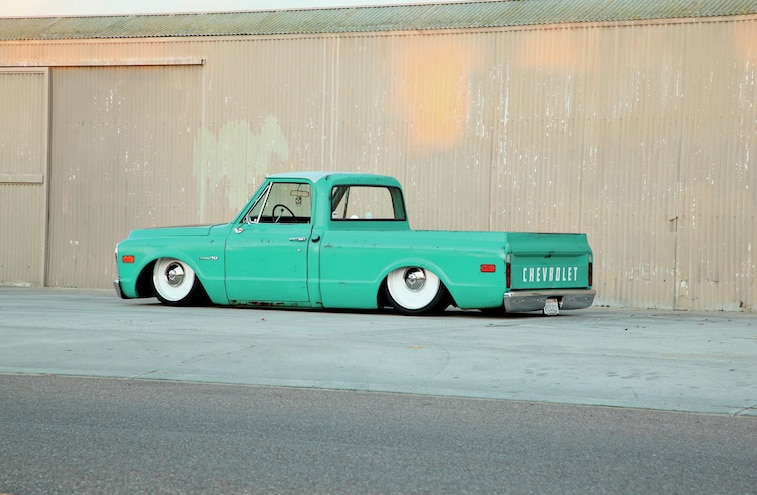 View Photo Gallery | 11 Photos
Photo 2/11   |   1971 Chevy C10 Rear Three Quarter
“I originally installed all-new brakes, front and rear, and dropped the truck statically with a 5/7 drop kit from Early Classic Enterprises. I did my Dead Air Garage tweaks to it and dropped it down to a 6.5/8 on Original 15x5 and 15x8.5 American Racing Torq-Thrust wheels and drove it slammed like that for about three months. It was my daily driver, and I used it to haul all kinds of things from groceries to Home Depot purchases. I even moved houses using it as my moving truck! But soon the static drop parts came off, and the wheels went into storage. I decided that this truck deserved to lay all the way down on the ground and the only way to do that and be happy with it was to do it from the frame up.
“I contacted Delmo Uchenko at Delmo’s in Burbank, California, to do the dirty work. The truck was sent to Del, and he tore the entire truck apart. The frame was stripped of all its crossmembers, and the two framerails were all that was left. I ordered a Porterbuilt extreme drop member kit that includes the front drop member, upper and lower control arms, and extreme notch, all powdercoated semigloss black. I ordered up an Accuair Switch speed kit to control the Air Lift airbags on the front and rear. The rear end was stripped, powdercoated, and rebuilt with new gears, a Posi and new Currie axles. Del bent up hidden brake lines and air lines so a look under the truck shows nothing but smooth clean framerails. The frontend was assembled with CPP 2.5-inch drop spindles, and the new stock disc brakes finishing things off. The wheels are Delmo Specials made by Intro. They replicate a stock smoothie wheel with a factory Chevy hubcap. The centers were powdercoated in semimatte white to match the roof of my truck. Del got the body mounted on the fresh frame with new body mounts and hardware. Del raised the bed floor and built custom mounts to get the bed sitting just right. The rear wheelwells were sectioned and then extended to clear the wheels and maintain the stock look. Before it left Del’s, the firewall was shaved, and Hills Hot Rods front fenderwells were installed along with Porterbuilt hood hinges. 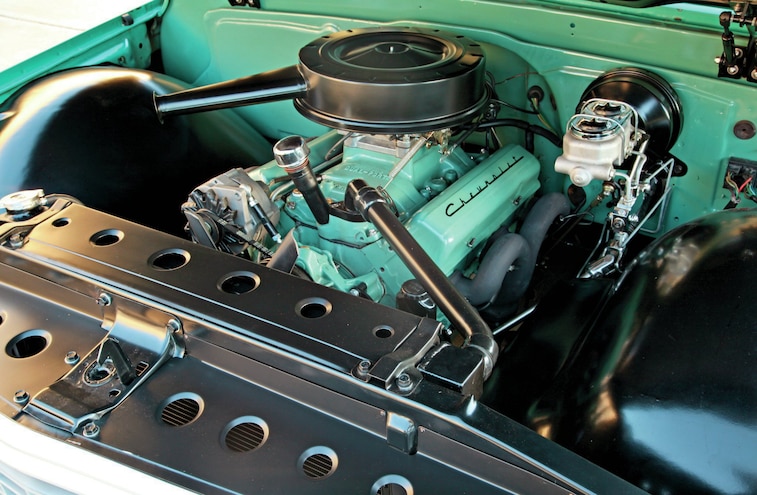 View Photo Gallery | 11 Photos
Photo 3/11   |   1971 Chevy C10 350 V8
“My good friend Eric Newman from Ted’s Rod Shop took the original small-block and rebuilt it with all-new bearings, rods, pistons, and an RV cam for that killer lope at idle! All wiring was hidden as well as the hoses and lines. To back up the potent 300hp motor setup, I had Ted’s add a Turbo 350 hooked up to a two-piece driveshaft using a custom center bearing spacer to keep the driveshaft straight while rolling 2 inches off the ground. Ted’s took care of wiring the truck back up, and the brake booster was swapped for a flush-mount 8-inch booster from CPP.
“The old seat cover was ripped and the dashpad looked more like a hipster mustache than a flat strip of vinyl. Once stripped, I started to put the interior back together. I added a new green dashpad and steering wheel, rebuilt the gauge cluster, and all the knobs were swapped. I laid in the new green carpet, re-covered the seat with a custom green houndstooth cover and swapped the door panels for the matching green ones. The end result is a true proper stock-style interior but done in true dirty ’70s fashion, when green on green was acceptable. 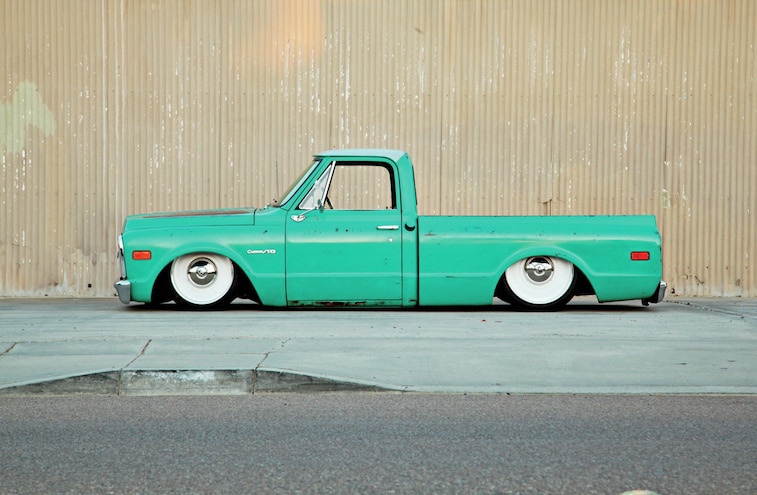 View Photo Gallery | 11 Photos
Photo 4/11   |   1971 Chevy C10 Side Shot
“I have my own special waxes made specifically to my specs, just for original paint cars and trucks. My father-in-law, Terry, and I went through a gallon of Dead Air Garage Patina Wax and several buffer pads to get the shine back to the truck. We spent the better part of a week getting the truck to shine again and not burn off the original paint. Next, we installed all-new window seals all around the truck, and rebuilt the door windows and vent windows. I also got together with Ted’s Rod Shop again, and we made up a one-piece radiator hose with clamp-less hoses, and we made up a radiator cover along with matching grille to shroud covers all with speed holes.
“I shook it down driving it around the roads of my hometown in Cardiff, California. People always stop to talk about the truck. A slammed truck is not a common sight around here, in the land of bright yellow and red plastic street rods. I constantly get asked when I am going to paint it, or if I am going to restore it. My answer is always the same: ‘It is painted.’ I will never paint it. Patina this good takes a lifetime to create and it should be left alone. My goal was to build a timeless truck that sat on the ground but kept the look of the original truck that I started with, and I think I accomplished that goal. That and do 100 mph, 2 inches off the ground. I accomplished that too!” 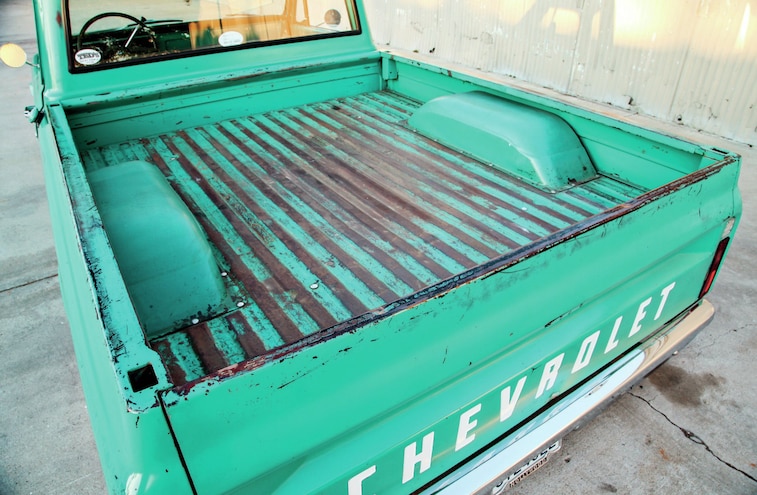