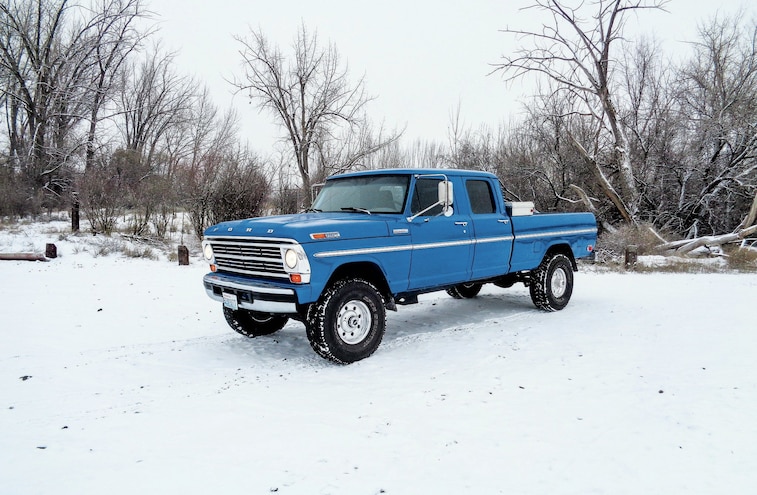 Let’s be honest: No project that takes place in the garage is ever as easy as we think it will be. But that sentiment applies doubly (or triply, or quadruply) in the case of Scott Thoren’s ’71 Ford F-250 crew cab, which the family calls “Frank.” See, while most projects involve a little rust repair and maybe some cannibalizing from a parts truck, Scott’s Tinkertoy involves a complete frame-and-running-gear swap, built with parts from five different trucks.

"I’ve invested seemingly as many hours into the build as dollars. –Scott Thoren"

When Scott purchased Frank (short for Frankenstein’s monster, who else?) a few years ago, the truck’s cab and front clip had already been mounted to a ’97 F-250 frame (complete with the 7.3L Power Stroke), but he says he wasn’t terribly happy with the setup. Luckily, since he bought the truck as a project for him and his 9-year-old, he had some time to get it sorted before his son started driving. 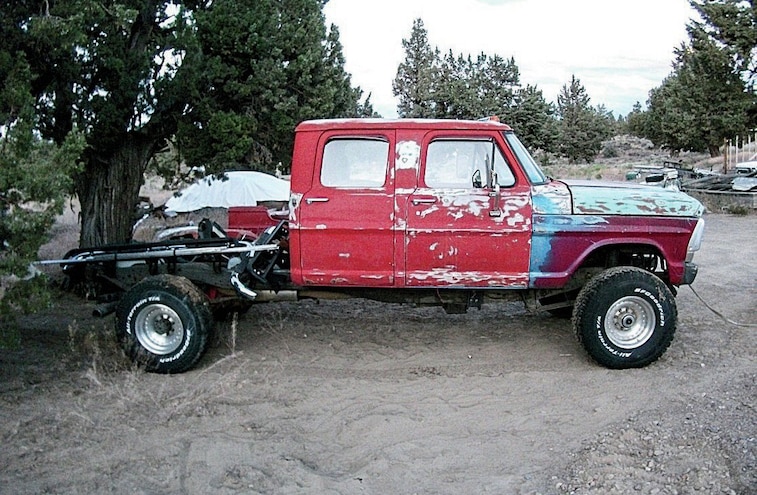 View Photo Gallery | 23 Photos
Photo 2/23   |   This is how the ’71 Ford F-250 looked when Scott bought it. The vintage body sat on a ’97 F-250 frame. The ’97 donor was apparently a theft-recovery vehicle, but with no seats, body panels, or electronics, it seemed like the perfect candidate for a classic/Power Stroke mash-up. However, the project stalled and bounced around to a few different owners before Scott found it in Oregon in July 2011.
The F-250 is finally on the road after more than three years of wrenching, but Scott says he’s still working out little details. Although he doesn’t know if he’ll ever be “done” with the project, the truck has come a long way from its humble beginnings as a cobbled-together shell.
Check out the details of Scott’s F-250 as we follow him from rusted start to polished finish—all from his own workshop in southeast Washington State. 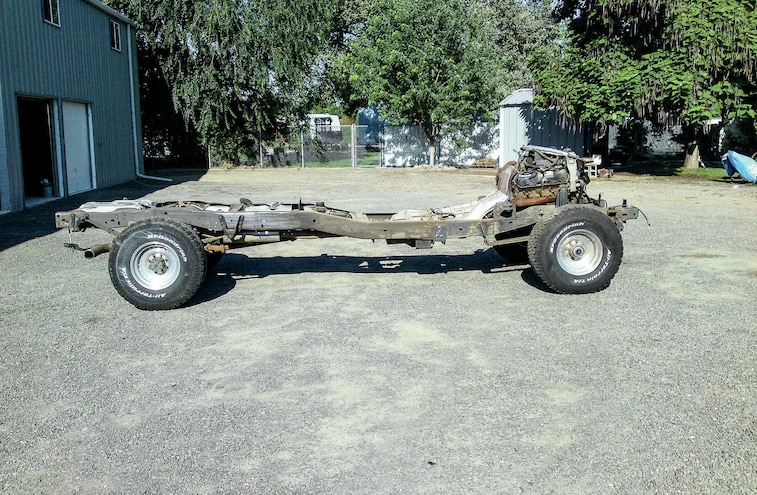 View Photo Gallery | 23 Photos
Photo 3/23   |   The first attempt at solving the engine bay clearance issue meant the cab had to come off the frame, which gave Scott a chance to inspect the powertrain. He says he believes the previous owner’s claim that the 7.3L diesel V-8 only has 37,000 miles, as the paint and decals are clean and in good condition. With the cab off, Scott was able to give the frame some cleanup and attention.
SpecSheet
Year/Make/Model: ’71 Ford F-250 sitting on a ’97 Ford F-250 Power Stroke frame and running gear
Owner: Scott Thoren
Hometown: Burbank, Washington
Engine: 444ci/7.3L Ford/International Power Stroke Diesel
Induction: Factory turbocharger
Exhaust: stock
Fueling: Factory direct injection
Engine Management: Bully Dog chip
Horsepower/Torque: Stock
Transmission: E4OD four-speed automatic with overdrive
Rearend: Limited-slip, 4:10:1 gear ratio
Suspension: 2½-inch body lift
Wheels: Weld aluminum
Tires: 35-inch Toyo Open Country A/T
Odometer: Who knows? With this many different trucks contributing to the build, it might as well be brand-new!
Special thanks: “My understanding wife Rikki, who put up with the long hours in the shop and then me coming into the house smelling of diesel fuel, gear oil, and beer.”
Fun fact: “I love knowing exactly how many hours went into this build. I’ve invested seemingly as many hours into the build as dollars.”
Future Plans: “I need to rebuild the spare Dana 60 front axle I have and put it in place of the Dana 50 IFS front end. I want to find a set of leather seats to install. I also need to build door pulls for the rear doors; they seem to be made of unobtainium!” 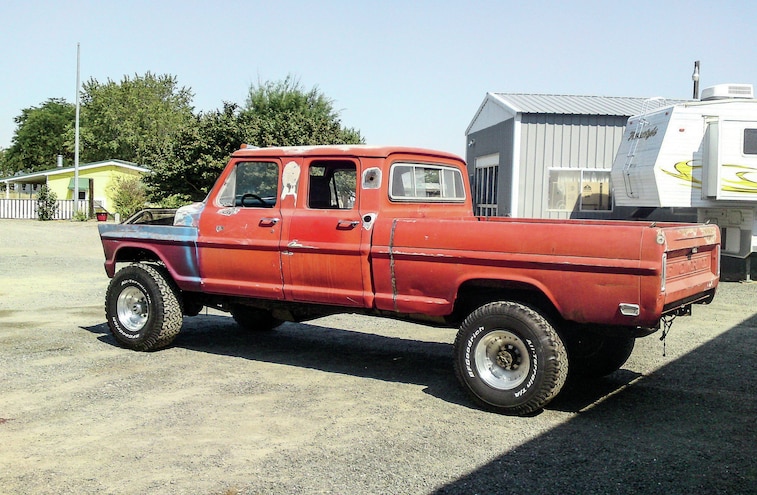 View Photo Gallery | 23 Photos
Photo 4/23   |   Once the frame had been cleaned up a bit and the firewall modified for extra clearance, the truck’s bed was shortened almost 10 inches to fit the frame. However, fitting the ’97 steering column to the old truck meant using flimsy mounting brackets and lots of fabrication. Scott decided that if he wanted his truck to have a securely mounted steering system, he’d have to use the firewall from a newer F-Series truck. We’d bet that decision came after lots of grumbling, since he’d already done so much work on the existing firewall. 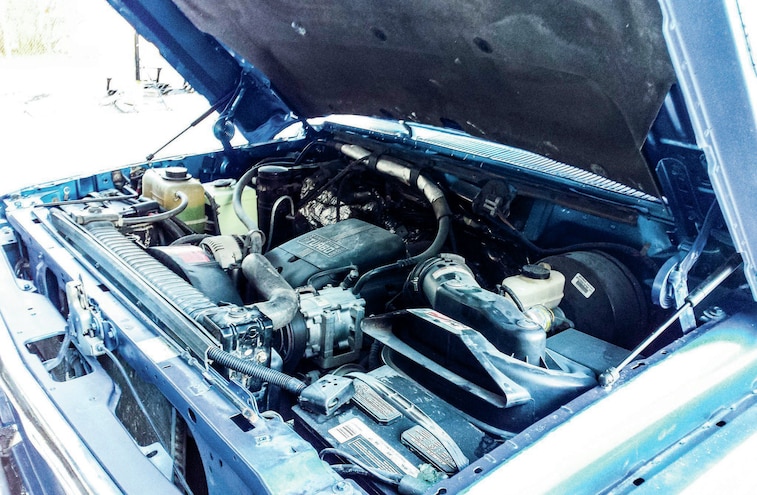 View Photo Gallery | 23 Photos
Photo 14/23   |   With an OBS Power Stroke engine, firewall, radiator carrier, inner fenders, hood supports, and even hood hinges, it’s hard to tell from looking at the engine bay that this isn’t a ninth-generation Ford F-Series. It even uses most of the same auxiliaries and pumps as an OBS Ford. A Bully Dog chip takes care of engine management, but the rest of the powertrain, including its turbo, exhaust, intake, and direct fuel injection, is stock. 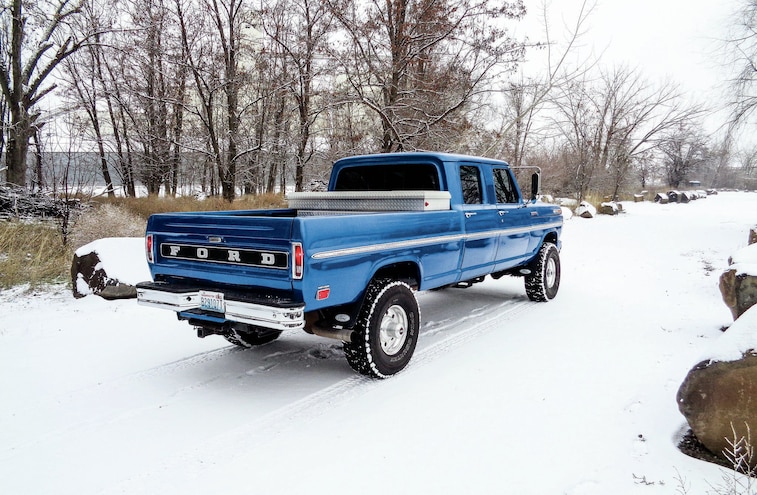 View Photo Gallery | 23 Photos
Photo 20/23   |   The blacked-out tailgate panel looks great with the blue paint. As with many of the other parts on the truck, it’s a modern design element infused with some classic style. A 4.10:1 limited-slip rear end, driven by the stock Ford E4OD automatic transmission, sits between those 35-inch tires.
In memoriam: Three of the trucks that donated their lives to make this project possible. In all seriousness, though, Scott says parts trucks make projects much easier. Not only did they provide a deep well of necessary parts and useful spares, but he was able to sell unneeded powertrain components, body parts, and other bits to help fund the blue pickup. The F-350 will even live on as a heavy-duty utility trailer, built after the rest of the truck was gutted for parts.