Taking Things to the Next Level and Never Settling 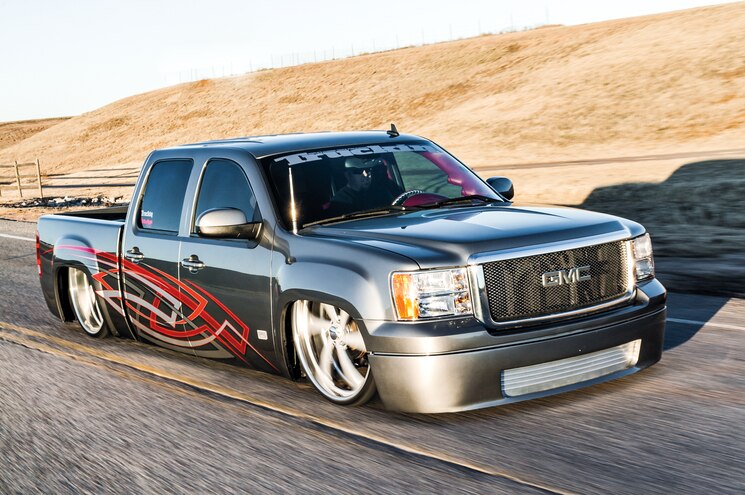 As the '07 generation series started to show up at dealerships, Carlos Herrera was already making plans to purchase one of these redesigned trucks. Eventually, he brought home a 2008 GMC Sierra Crew Cab, with his intentions to only tint the windows and drive it. At least that is what Carlos thought. One night while hanging out with his buddies, ideas started to fly around about if he would or would not customize the new purchase, and a bet was made that he wouldn't cut up his new truck. If you know Carlos, you know he never backs down from a bet, so without hesitation he started customizing by taking the bed off the truck and putting the truck up on jackstands. The modifications began to fit a set of 24-inch Intro Vista II's under the new 'bagged stance. 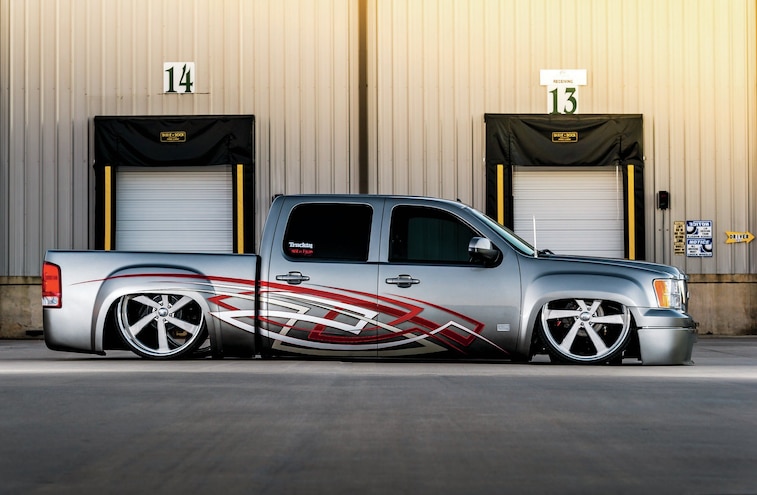 View Photo Gallery | 10 Photos
Photo 2/10   |   2008 Gmc Sierra Slt Passenger Side
Several years passed with the GMC in that configuration, and while attending several truck shows and seeing more and more big billets on his generation of truck Carlos decided it was time to go bigger. He contacted Intro to make up another set of Vista II's, but this time he wanted 26s. That wasn't all that received an updated look. The dash and door panels were pulled out of his truck and smoothed down to be color matched to the factory paint. 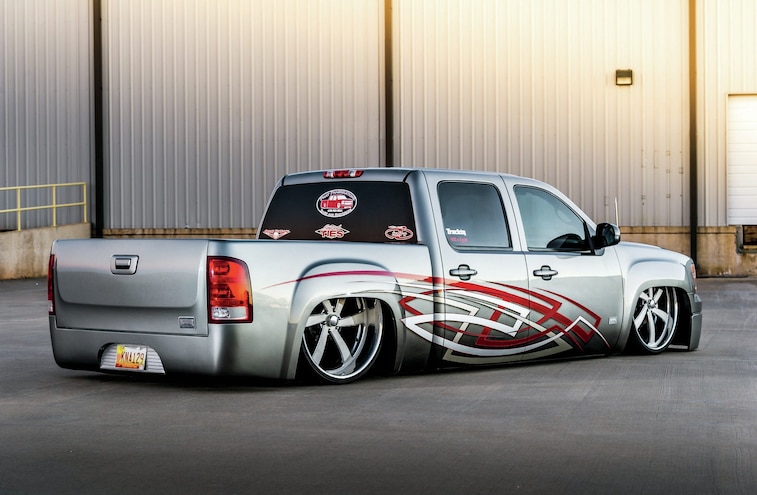 View Photo Gallery | 10 Photos
Photo 3/10   |   2008 Gmc Sierra Slt Rear Passenger Side
Just when you might think this version of the GMC was going to stick around a while, along comes Jake McKiddie into the picture. Carlos got in touch with Jake of Phat Phabrikationz in Oklahoma City about bringing the GMC to him to make his truck sit flat on the ground. This was Jake's specialty; he has built many trucks for clients that have graced these very pages, and soon the modifications were in full swing. Meanwhile, Intro had come out with a new line of billet rims. Carlos just couldn't resist the look of the Twisted Rally design, and since this was a perfect time to order wheels while things were being chopped and welded back up at Jake's, Intro made up yet another set, and, yes, they were bigger—28 inches to be exact. That was not the only surprise Jake had planned. A full interior color change to blood red was on the build list. While the interior pieces were getting a new coat of paint sprayed, Cole Stevens laid out some beautiful graphic design work on each side of the truck. Finally, the truck was handed over to Ike Ray to make the paint look glass smooth with his magic buffing skills. 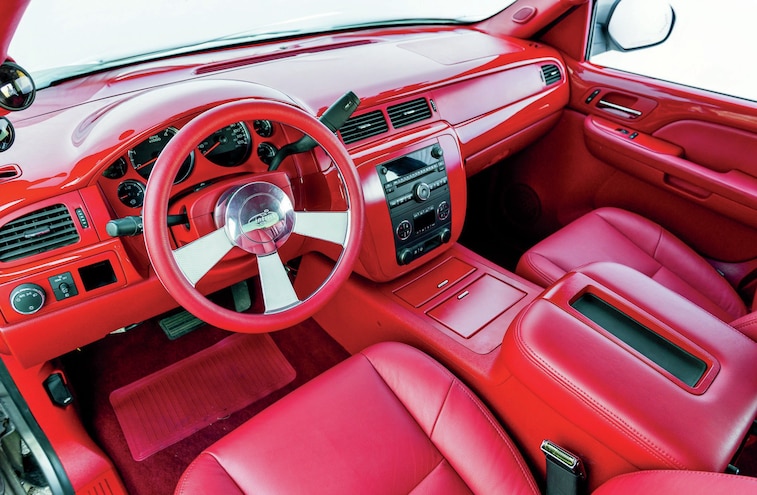 View Photo Gallery | 10 Photos
Photo 4/10   |   2008 Gmc Sierra Slt Interior
As with anything, timing is everything, and it just so happened that as the truck was being finished up the 2014 SEMA show was around the corner. Jake showed us some teaser pictures soon this amazing truck was one of the few chosen to represent Truckin magazine at SEMA. Needless to say Carlos was ecstatic to see how his truck had turned out. Even though the truck has been through many changes since back in 2008 when he picked up in stock form from the dealership. Being around some great friends with some great vision for design can make a stock looking truck turn into a head turner at the famous SEMA Show. And he's not done yet. Just as this issue was going to press the truck went back to Jake's for yet another makeover. Prepare for the next level!
Inside the Build
Year/Make/Model: 2008 GMC Sierra SLT
Owner and City/State: Carlos Herrera, Eunice, New Mexico
Club Affiliation: Severed Ties
Chassis
Front Suspension: Ekstensive lower arms, 2,600-pound Airlift 'bags, 3/8 SMC valves
Rear Suspension: 3/4 frame built from 3x4-3/16 thick rectangle tubing, wishbone three-link, F9000 'bags, 3/8 SMC valves, dual pack 480 Viair compressors, dual Air Zenith digital gauges , 5-gallon tank, two piece driveshaft, all suspension done by Jake at Phat Phabrikationz (OKC, OK)
Shocks: Monroe
Drivetrain
Engine: 5.3L LS Stock, rerouted exhaust
Body
Grant Kustoms front bumper with aluminum bead rolled insert. Matching three-piece roll pan with same aluminum insert, shaved stake pockets, top of tailgate, and fuel door, bodywork and paint by Ike Ray (Council Hill, OK), graphics by Cole Stevens (Tulsa, OK), sheetmetal work in bed by Phat Phabrikationz, finish work and spray-in bedliner by Ike Ray
Interior
Red Katzkin leather by Curt Enochs, red leather door panels and center console, interior panels sprayed by Ike Ray
Wheels & Tires
Wheels: 28x10-inch Intro Twisted Rally
Tires: 295/25R28 Dcenti
Special Thanks: Jake Mckiddie, Ike Ray, Cole Stevens, Blaine Hawkins, Tracee Hiler and Tony Moore