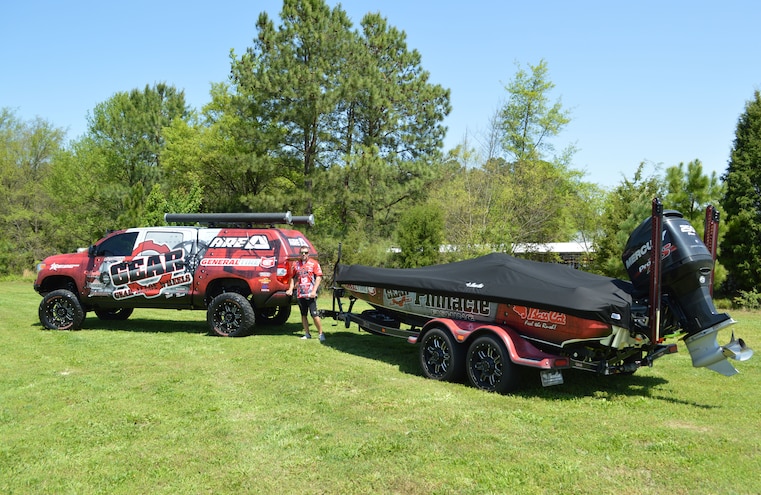 It’s noon on Tuesday in Lake Wylie, South Carolina, a small community on the shores of its namesake reservoir. Britt Myers’ truck is packed and hitched to the tandem-axle trailer that carries his 20-foot bass boat, but he still has one quick stop to make before he hits the road. He hopes to finish the 45-hour drive to his destination—Sacramento, California—by Saturday. That will give him a day to acclimate to the West Coast before work begins at dawn on Monday. 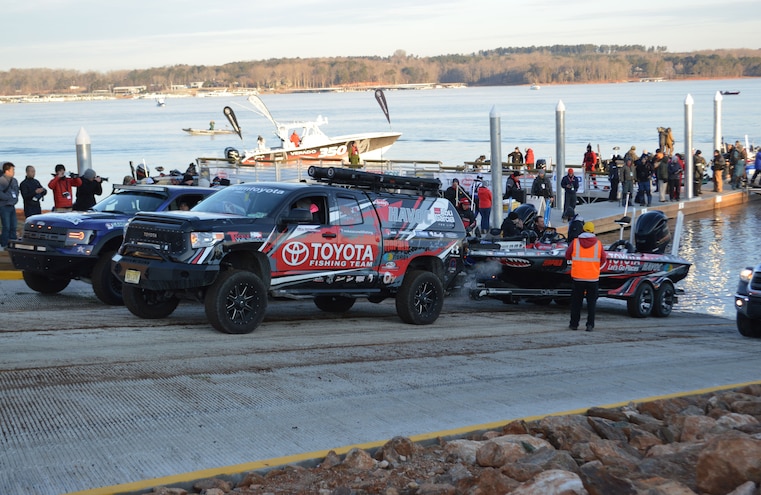 View Photo Gallery | 11 Photos
Photo 2/11   |   Many of the 113 Bassmaster Elite Series anglers drive a Toyota. The automaker is a series sponsor. That involvement includes a contingency program that rewards the highest finishing owners at each event with bonus cash.
Myers is one of 113 anglers who qualified to compete in the Birmingham, Alabama–based B.A.S.S. 2015 Bassmaster Elite Series, a competition most people in the fishing industry regard as the premier fishing tournament series in the world. From March through September, competitors will drive with boat in tow to New York’s St. Lawrence River, Arizona’s Lake Havasu, the Sabine River on the Texas Gulf Coast, Sturgeon Bay in Wisconsin, and four other events, including the Sacramento River. At each stop, they’ll compete for four days, trying to catch, weigh, and release enough bass to win the $100,000 First Place prize. In the process, most will put 30,000 to 40,000 miles on their tow vehicles—maybe more—depending on how often they return home during the season. 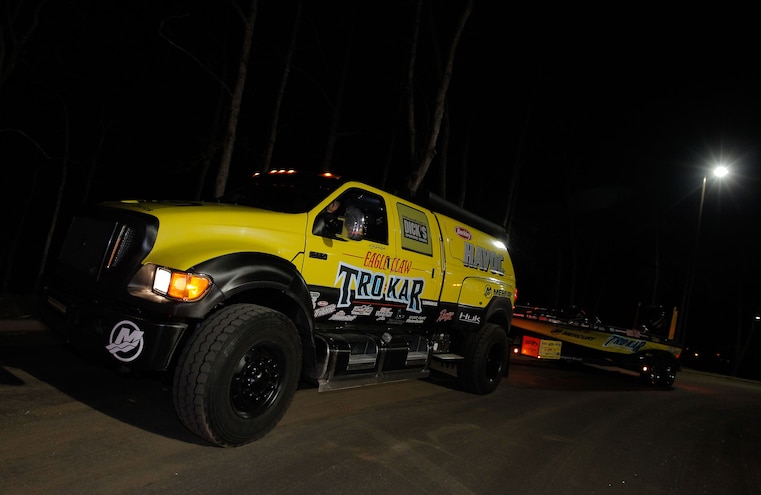 View Photo Gallery | 11 Photos
Photo 3/11   |   Reese’s Ford F-650 is big in stature and attention-drawing power. The anglers’ trucks need to be tow vehicles and marketing platforms for their sponsors.
The anglers’ trucks are customized to support life on the road, where catching bass and supporting sponsors pay the bills. Skeet Reese is a 10-year Elite Series veteran, and his truck, built by Truck Customs in Augusta, Georgia, is the most recognizable on tour. The bright yellow ’08 Ford F-650 has black trim, a 4.5-ton suspension, Cummins engine, and six-speed Allison transmission. It carries 200 gallons of fuel, which means it can go almost 2,000 miles between fill-ups. The cab has satellite radio and air-conditioned seats, but he removed the backseat to make room for more gear. The rig stays on the road all season, so he needs to pack accordingly. Not only does he need different tackle at each lake, he also needs clothing that will keep him comfortable from 20 degrees to 100 degrees in every weather condition. A hired Alabama-based driver wheels it between events, so Reese, whose career earnings passed $3 million with an Elite win at Alabama’s Lake Guntersville in April, can fly home to Auburn, California, or sponsor commitments during off weeks. 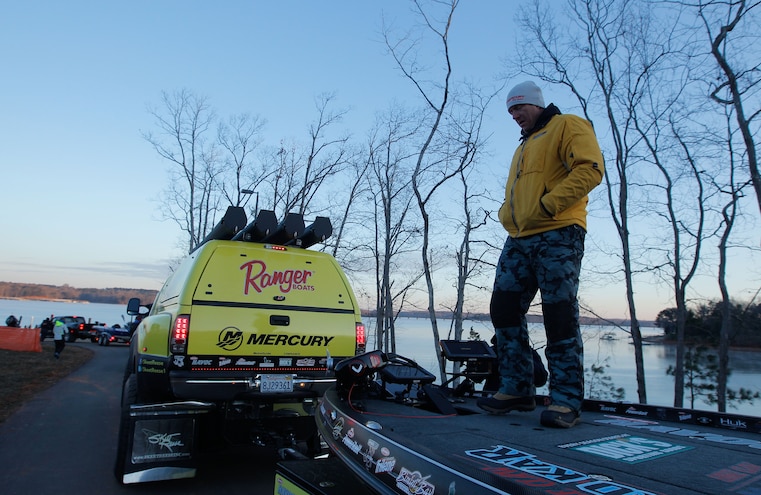 View Photo Gallery | 11 Photos
Photo 4/11   |   2008 Ford F 650 Towing Boat
Reese’s truck excels at drawing attention, which means added exposure for his laundry list of sponsors, including Dick’s Sporting Goods. “There are more pictures of that truck than probably every other Tour truck times 10,” he says. “I’m actually amazed I haven’t witnessed an accident yet. When you’re driving down the interstate, people are driving up next to you taking videos and photos. It has caused a lot of pandemonium on the road.” Other Elite anglers run into similar situations. “It’s a never-ending thing,” says Chad Morgenthaler, an Illinois angler and Elite Series sophomore who drives a tricked-out Toyota Tundra. “[My boat and truck] attract a lot of attention. Every fuel stop pretty much you get approached in one way or another. That’s what it is all about, bringing attention to your sponsors.” He said most onlookers are in awe of his boat’s giant 250hp outboard, the maximum allowed in Elite Series competition. “It amazes me how many people think you are a race-boat driver.” 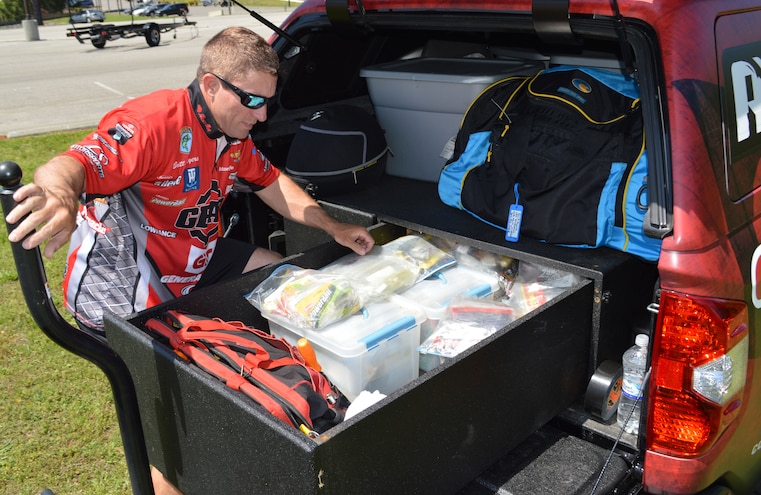 View Photo Gallery | 11 Photos
Photo 5/11   |   You can’t catch the winning bass while on the bank working on tackle or your boat. So to increase on-the-water time, Myers and other Bassmaster Elite Series anglers use cargo drawers and slides to organize spare fishing tackle and marine parts, making them easy to find even when they’re exhausted after 14 hours on the water.
While Elite anglers drive all major truck manufacturers, Toyota is the most popular. The automaker is also a primary series sponsor. Its Toyota Trucks Bonus Bucks program, for example, rewards the top finishing owners at each event with cash—not only at the Elite level but at smaller, regional tournaments, too. Alabama Elite Series angler Justin Lucas isn’t sponsored by Toyota, but he drives one wrapped with the logo of his primary sponsor—A.R.E. truck caps and accessories—and won about $4,000 of Bonus Bucks during the 2014 Elite Series. “If I can cut a couple checks like that each year, it’s a good deal,” he says. 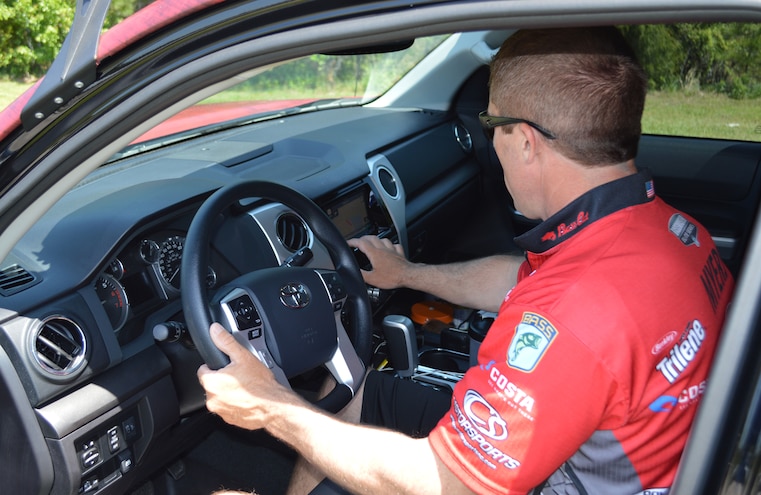 View Photo Gallery | 11 Photos
Photo 6/11   |   Bassmaster Elite Series anglers make only subtle changes inside the cabs of their trucks. Myers upgraded the navigation system and stereo and added a small refrigerator to keep his drinks cool while he’s putting down the miles—as many as 40,000 in one season.
When not competing, Myers works at his business, CS Motorsports, in Gastonia, North Carolina, just up the road from Lake Wylie. His shop not only supplies the local truck customizers rims, tires, and electronics, but it is also the place for Elite anglers to customize their trucks, regardless of nameplate. That includes Myers’ tow vehicle, which sports the same modifications he makes to the others. Wrapped in sponsor logos, his ’15 Toyota Tundra rolls on 35-inch General Grabber tires mounted on 20x12 Gear Alloy wheels. It has a 7.5-inch Bulletproof Suspension lift kit and four Fox reservoir shocks, which improve handling. The truck’s rear suspension is bolstered with airbags. They level the truck when it’s loaded and towing his boat, which adds mileage and keeps headlights from blinding oncoming drivers. “The four-wheel-drive, lifted trucks are a big deal right now,” he says. “They are very popular.” It’s powered with Toyota’s 5.7L V-8, which has a computer update that calibrated the speedometer to the larger wheels, added about 20 hp, and improved fuel mileage (most Elite anglers report 9 to 11 mpg). He swapped the standard 23-gallon fuel tank for one that holds 46 gallons, increasing the truck’s range. That will come in handy when he crosses long stretches of desolate desert on his way to Sacramento. In the bed under a cap are two large storage boxes for tackle. More gear is piled on top. Two 6-inch tubes for rod storage are mounted to the cap’s roof. 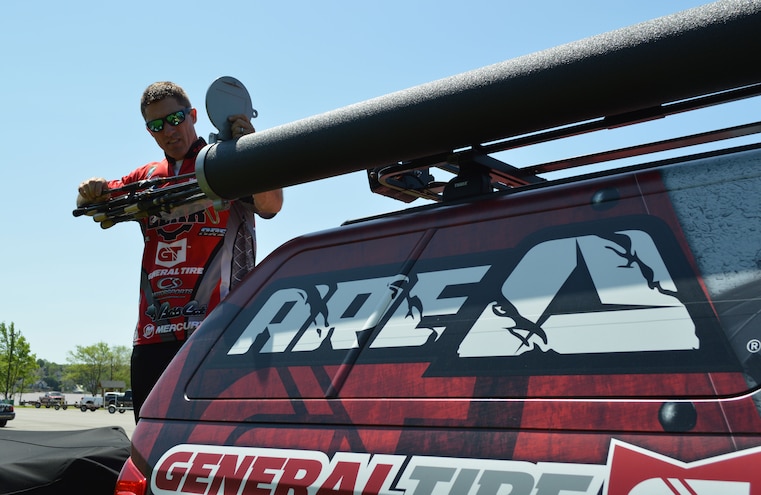 View Photo Gallery | 11 Photos
Photo 7/11   |   Most Bassmaster Elite Series anglers use rods between 7 and 8 feet long, which won’t fit in the bed of their truck. Spares are stored in tubes mounted on the cap. Britt Myers builds the tubes at his North Carolina business, and they are distributed across the country through A.R.E. truck accessories.
One thing all Elite Series trucks have is an array of exterior LED lights. Those mounted in the front light the way to and from dark boat launch ramps. The rear ones illuminate bed and boat. Anglers can scout the tournament waters during the three days prior to each event. They fish from dawn to dark, identifying fishing spots and techniques before returning to their lodging to prepare for the next day. “I’m working in the back of the truck a lot at night,” Lucas says of his scouting days. “And being able to turn on my lights and have them shine in the boat is a huge help. I use those every single day.” There’s much to see in the back of his truck. Not only does he carry enough tools to fix most vehicle or vessel issues, but there is plenty of spare tackle, reels, props, fish finders and an electric trolling motor, which is used to position the boat while fishing. 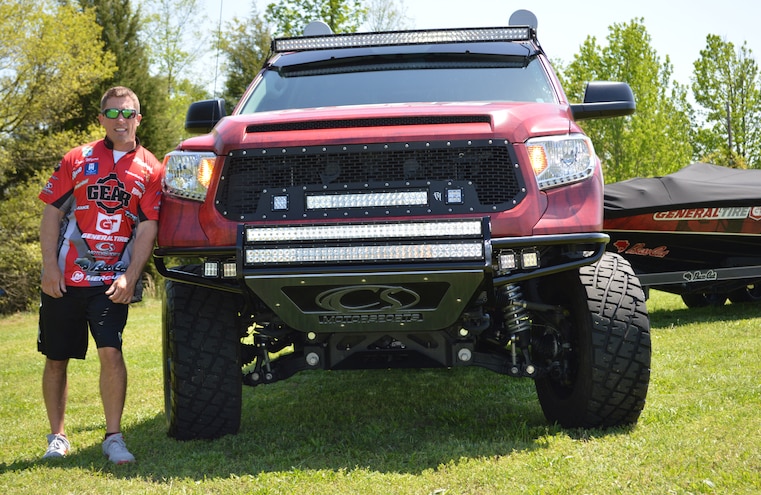 View Photo Gallery | 11 Photos
Photo 8/11   |   Myers customizes trucks for many of his fellow competitors.
Like Reese, most Elite anglers opt for only small changes inside the cab. Myers added a navigation system, stereo, and small refrigerator that’s powered via the cigarette lighter. Lucas, whose truck was tricked by Myers, stocks his with treats. “If you look in my glove compartment, most of the time, you’ll find sour gummy worms in there,” he says. “I love gummy candy, so sour apple rings or gummy rings, too.” Arroyo Grande, California, pro Jared Lintner, who still drives a truck for his family’s milk distribution business between events, has audio books to help the miles go by faster. That’s when he’s not on his cell phone calling home, doing interviews, or working with sponsors.
Many of the Elite anglers’ trucks haul something even more important than their favorite lure: family. It’s how they stay together in a sport that demands so much time on the road. While some employ a second truck to tow a fifth-wheel camper, others travel together, renting a lakeside home or hotel room at each event. The latter group includes Indiana Elite Series pro Bill Lowen. His wife, daughter, and son join him in his 2500HD Chevrolet pickup. “I’m fortunate that the family gets to travel with me all the time. The kids are always in the backseat in car seats,” he said. “They don’t know anything different. My daughter has been to almost every state in the U.S. When we are home, they are always asking, ‘When are we leaving?’”

- OF
By Pete M. Anderson
1 Articles