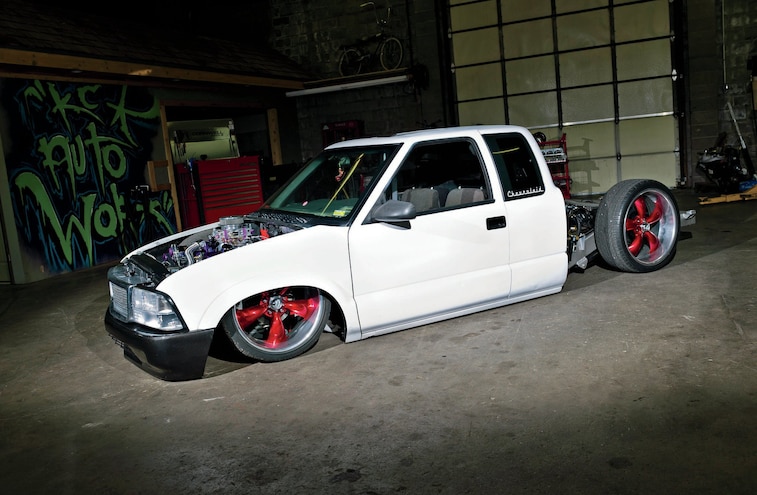 In need of a new vehicle, Dave Bridges started out his search by looking at local car lots for the best deal. After doing some searching, he soon came upon a ’97 S-10 extended cab truck. The sales guy told him that the original owner of the truck was a roofer, so the body and roof had seen some abuse from where he attached his ladders to the truck. At the time, this did not bother Dave because he just wanted it for a daily driver and never had any plans to do anything more to it, so he purchased it. At this point, he knew nothing about ’bagged trucks, but started to see more and more driving around the streets of Independence, Missouri. Little by little the customizations made their way on the truck like 20s and installing a static drop kit. View Photo Gallery | 4 Photos
Photo 2/4   |   1997 Chevy S10 383 V8
One afternoon while cruising around the city, Dave stopped to fill up some gas and a stranger came up to him to tell him how nice his “Dime” was and asked him if he was going ’bag the truck so he could “drag it”. Dave wasn’t quite sure of the term “drag it,” so the stranger explained it to him. Then, the gears in Dave’s head started to turn. After he was invited to a local cruise and hangout spot called Legends, where all the local car guys frequented, the ideas and part searching started. Let’s just say after the Legends cruise, Dave’s life forever changed once he saw a truck drag 30-40 feet away from him. He was hooked. That night he told himself that one day his truck would drag, and soon the torch came out and the cutting started.
Bagging the truck wasn’t all Dave had plans for, as the worn-out factory motor was done in, and he had a backup 383 stroker motor ready to drop in the framerails. So in went the new heart, and it gave a whole new life to his S-10. 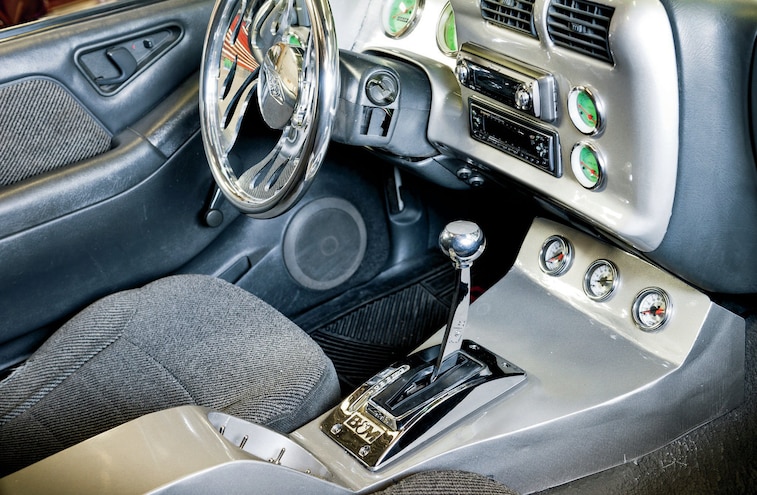 View Photo Gallery | 4 Photos
Photo 3/4   |   1997 Chevy S10 Interior
A good friend of Dave’s, Mike Logan, was checking out his build and started to put that little bug in his ear. If he’d gone this far, he might as well body drop it. It wasn’t a hard sell to Dave after Mike brought his bodied S-10 by to compare his with. Once again the torch was fired back up so a 3 1/2-inch stock floored body drop would lay the body completely on the ground.
Taking a look back, this truck that was once used for hauling around roofing materials, has now been given a new life in the custom world. Dave has even bigger plans for this truck that will make us all give him two thumbs up when we see him rolling by.
Inside the Build
Year/Make/Model
1997 Chevy S-10
Owner and City/State: Dave Bridges (aka “Mini-Truckin Dave”) Independence, MO
Chassis: Front Suspension: RE7 Slam ’bags, FBI upper/lower control arms
Rear Suspension: RE7 Slam ’bags, square tubed frame with chrome upper/lower bars
Shocks: Nissan Hardbody shocks
Drivetrain
Engine: 383-cid V-8, performance cam, Performance Products high-rise intake, Sanderson’s ceramic-coated headers, Purple powdercoated valve covers and billet serpentine pulleys.
Transmission: TH350
Body
3½-inch body drop, sunroof out of a Nissan Maxima
Interior: Dolphin gauges, modified stock dash, all metal console
Stereo: Pioneer CD player and 6½-inch speakers
Wheels & Tires
Wheels: 20x8.5 and 22x10 Coys
Tires: 235/45/20 and 265/35/22 Hankook 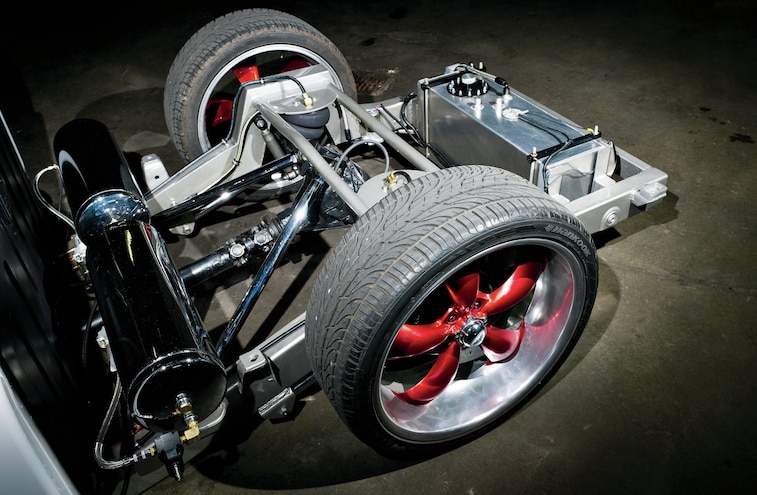