A Second Chance To Build An Awesome 2008 Chevy Silverado 3500HD 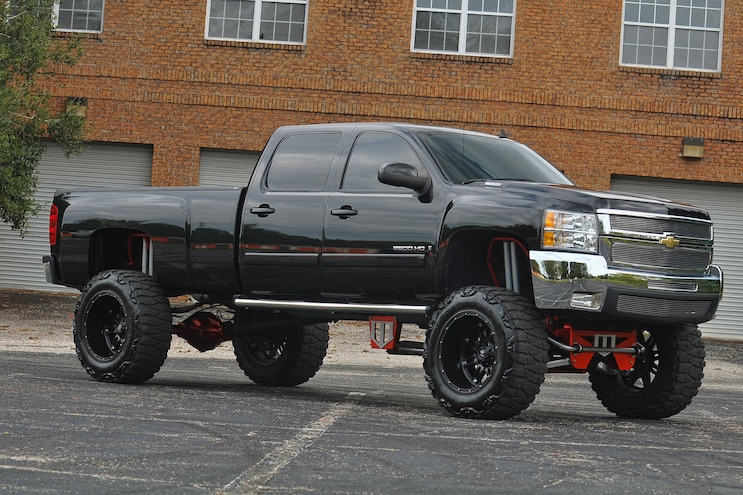 Some say we are destined to fall into the career path we belong to. Thirty-year-old Scott Ward of Ocala, Florida, began his youth like many others, listening to loud music. When he turned 17, he purchased a Nissan truck and began figuring out a way to put as many speakers as he could inside the small cab. He spent months at a shop called Audio Nutz and, after showing his enthusiasm, the owner Steve decided to get Scott more involved. Under the tutelage of Steve, Scott learned how to fiberglass and build custom cars and trucks. His knowledge and passion grew larger and larger until Scott decided to step out on his own and begin Soundz Krazy in Ocala. 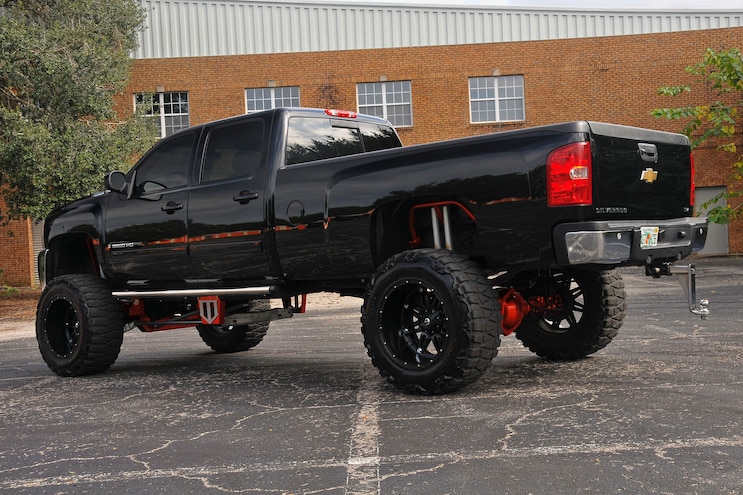 View Photo Gallery | 18 Photos
Photo 2/18   |   When Scott Ward’s first custom build met its demise in an unfortunate accident, he didn’t let it discourage him. He quickly purchased a new-to-him ’08 Chevy Silverado 3500HD and set to work.
As trends began to grow, Scott realized the market was transforming from the smaller and lower trucks to the larger and lifted trucks. That’s when Scott decided to purchase a black Ford F-350. He had hopes of building it to show off his workmanship talent, but fate had another plan. The black Ford was involved in an accident right after Scott added a 12-inch lift to it. Without hesitation, Scott decided to start again, this time choosing an ’08 Chevrolet 3500HD LTZ diesel truck from a dealership. 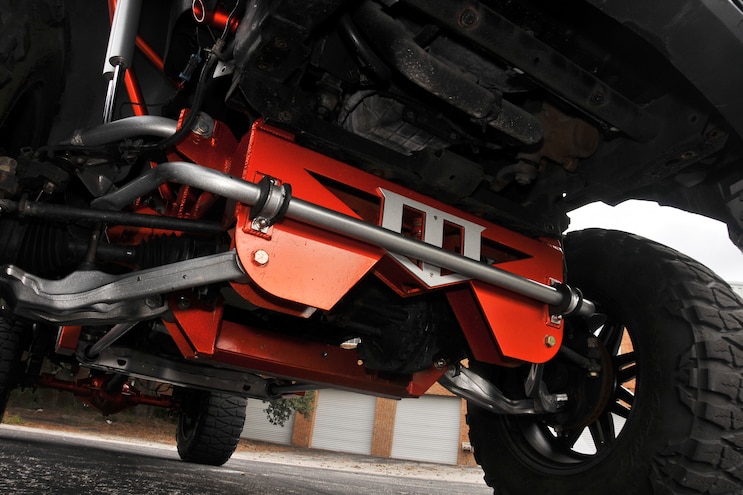 View Photo Gallery | 18 Photos
Photo 3/18   |   A 12-inch lift kit from Third Coast Custom provides the altitude and attitude for Scott’s custom Duramax.
After carefully bringing the Chevy back to the shop, Scott added a set of 22-inch Fuel Hostage wheels and wrapped them with 40x15.50R22 Nitto Mud Grappler rubber. Once the wheels and tires were mounted, the Chevy understandably needed to be lifted higher. Scott ordered a 12-inch lift kit from Third Coast Custom and got down and dirty in his shop. The suspension was painted House of Kolor Kandy Tangerine with silver accents and carefully installed. Scott added eight Bilstein 12-inch shocks to the Chevy and had to custom build shock hoops for the front and rear. A four-piece billet grille was inserted to replace the original. 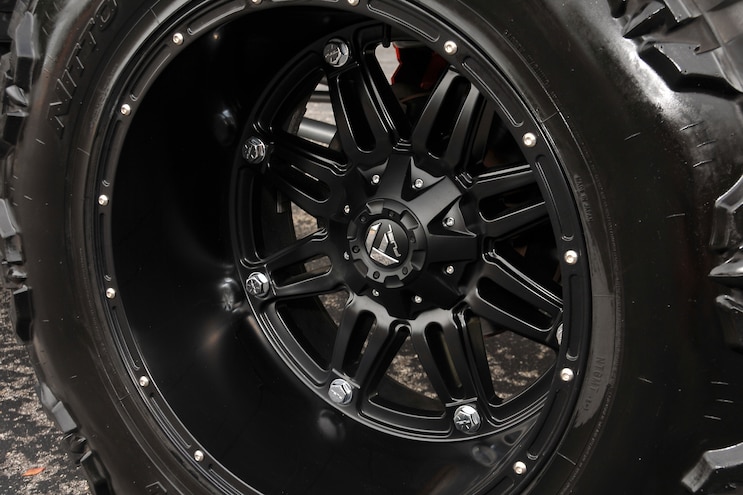 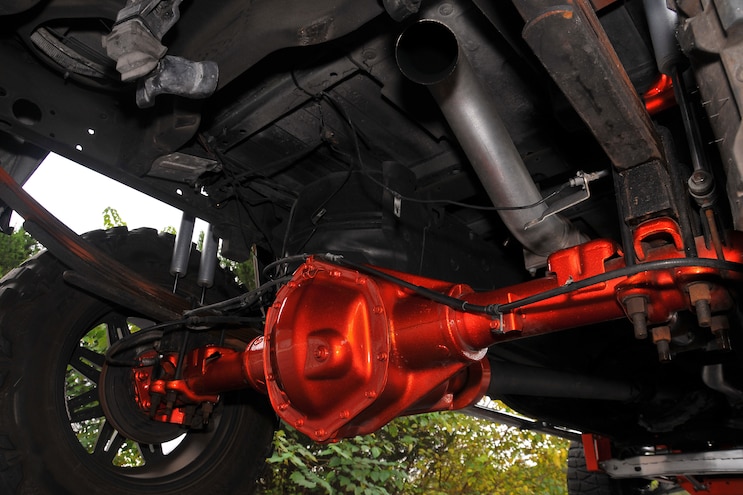 View Photo Gallery | 18 Photos
Photo 8/18   |   Nothing was left untouched on this build. Suspension and drivetrain components were painted House of Kolor Kandy Tangerine with silver accents. 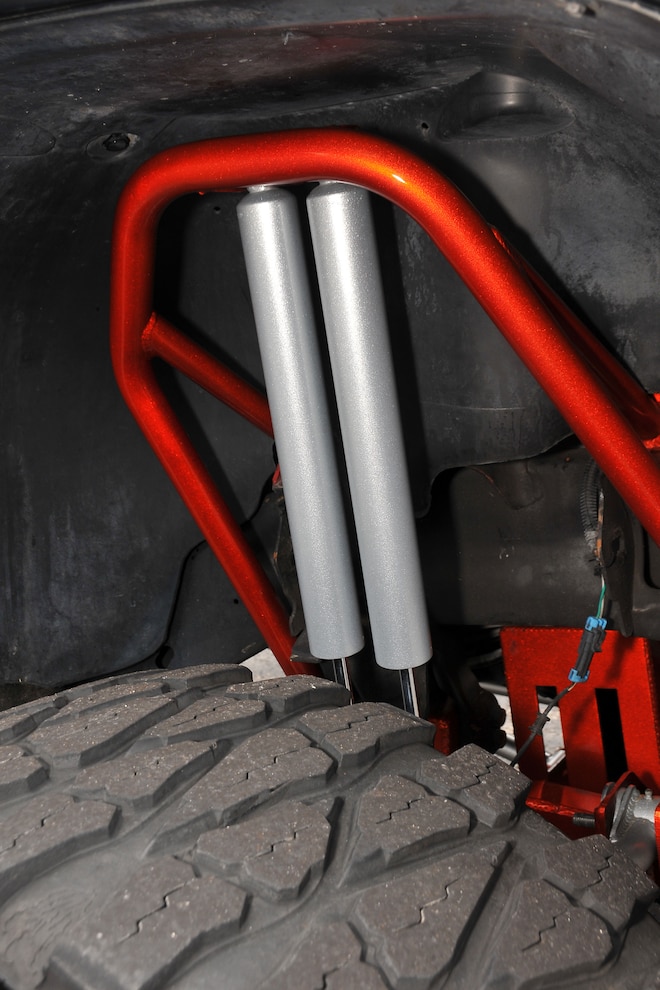