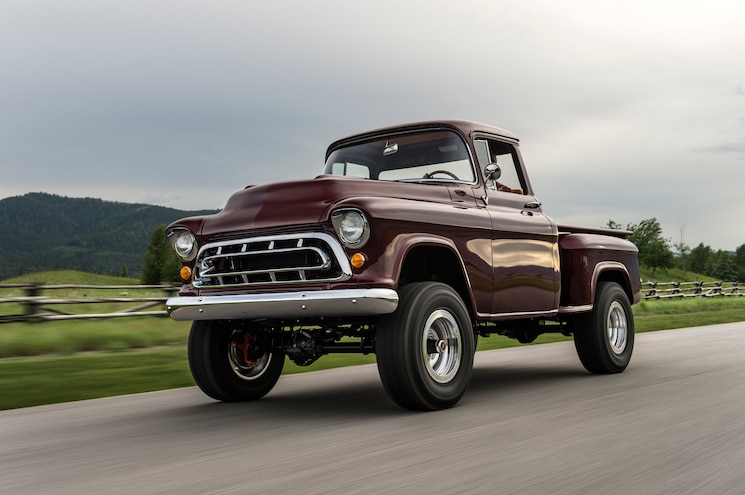 We’ve already had some experience with Legacy Classic Trucks and its founder Winslow Bent. The company’s mission is to bring high levels of comfort, quality, and performance to the world of vintage trucks. Its last effort, the Legacy Classic Trucks Dodge Power Wagon, was a success on all fronts, bringing stump-pulling capability and modern convenience to the legendary pickup. It was for that reason we had high hopes when Bent announced his next masterpiece would be inspired by the NAPCO Chevrolets built from 1955 to 1959. For that reason, we made the scenic drive to Ojai, California, to enjoy an afternoon with Bent and his NAPCO prototype. Upon seeing the truck waiting for us at the end of the road, we knew we were going to have a very fun afternoon. 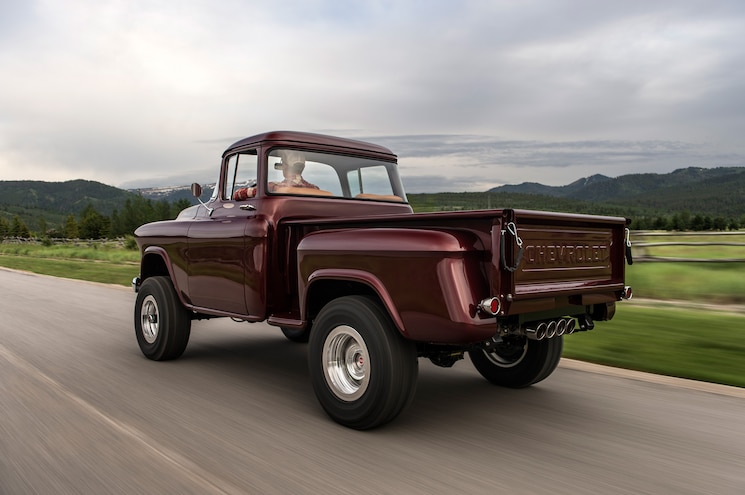 View Photo Gallery | 35 Photos
Photo 2/35   |   1957 Chevrolet Task Force Napco Legacy Classic Trucks Rear Three Quarter In Motion
Before taking the wheel, Bent gave us a quick history lesson on the truck. From 1955 to 1959, Chevrolet offered its Task Force line of light-duty pickups with an optional “Power-Pak” option, supplied by the Northwestern Auto Parts Company, or NAPCO (a GMC version was also available). The kit fit the truck with a front driveline, divorced transfer case, and related hardware to give it four-wheel drive. Unfortunately, it also gave the truck heavy steering, a stiffer-than-normal ride, and some scary handling characteristics due to its elevated stance. While those problems are understandable given the age and intended mission of the pickups, they make them difficult to use on a regular basis. 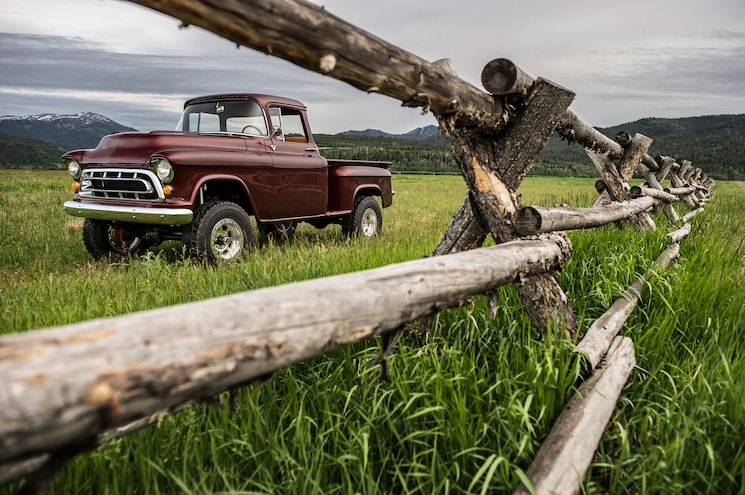 View Photo Gallery | 35 Photos
Photo 5/35   |   1957 Chevrolet Task Force Napco Legacy Classic Trucks Front Parked On Grass
But for those who simply must have the vintage feel of a NAPCO Chevrolet—but would like some added drivability—Legacy Classic Trucks has the solution. The vehicle you see here is the company’s first effort at building a NAPCO-style Chevy, and in spite of its rugged, vintage looks, Bent says the only part of the pickup that’s from 1955 is its interior ash tray and sun visor spindles. Every other component has been sourced or reengineered to deliver top performance and excellent fit and finish. 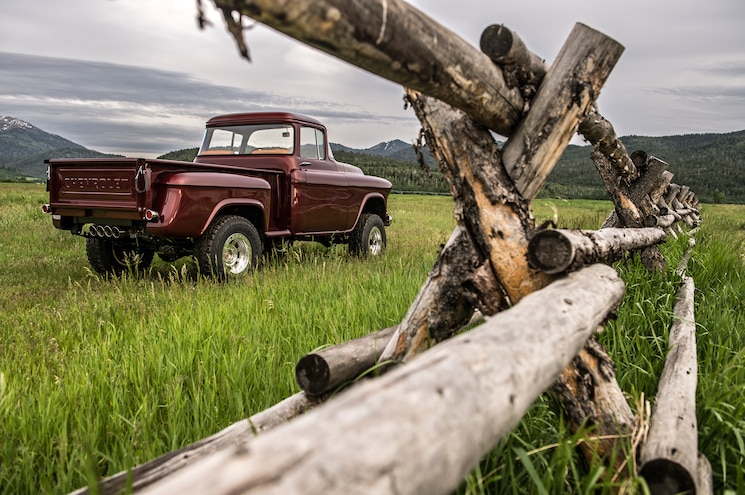 View Photo Gallery | 35 Photos
Photo 6/35   |   1957 Chevrolet Task Force Napco Legacy Classic Trucks Parked On Grass 01
Premier Street Rod provides the sheetmetal, while Dynatrac ProRock 44 front and ProRock 60 rear axles provide mounting points for the Alcan springs and King Off-Road shock system. Under the hood, Legacy Classic Trucks recommends an all-aluminum Chevrolet 5.3L V-8, displacing 327ci, but the company will also build the NAPCO with other engines from the LS family, and there are rumors a diesel model may be available as well. This particular truck was spec’d perfectly, with the Chevy 327 under the hood, backed up by an AX15 five-speed manual transmission, the same gearbox you’d find in a 4.0L I-6–equipped Jeep Cherokee or Wrangler. An Atlas twin-stick transfer case sends power forward, rearward, or all-fourward, with high and low ranges for each axle. 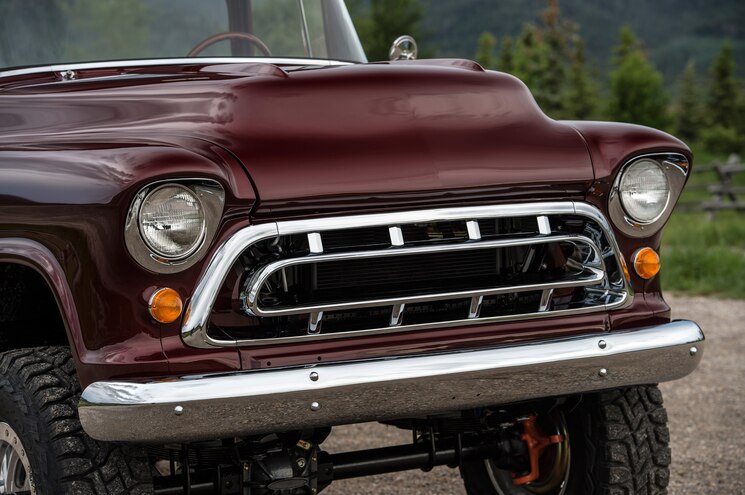 View Photo Gallery | 35 Photos
Photo 7/35   |   1957 Chevrolet Task Force Napco Legacy Classic Trucks Front Grille
Modern braking and steering systems ensure the Legacy NAPCO turns and stops as well as it goes, and the whole kit is remarkably easy to handle around town. Sized like a conventional NAPCO Chevy and featuring the massive windows the Chevrolet Task Force was known for, the Legacy is surprisingly easy to park in a garage or on the street. It also gets attention everywhere it goes, particularly when the driver gooses the throttle and lets the 350hp, 350–lb-ft V-8 bark through the quad-outlet Borla exhaust system. The center-exit exhausts are styled like those of the Corvette C7 and feature the sports car’s dual-mode baffles, adding a subtle hot-rod touch that’s easy to love. With the baffles closed, the engine purrs sweetly throughout the rev range, but open them up and it roars at anything over quarter-throttle. View Photo Gallery | 35 Photos
Photo 8/35   |   1957 Chevrolet Task Force Napco Legacy Classic Trucks Tailgate Exhaust
Off-road, the NAPCO is a beast. Suspension travel from the progressive-rate leaf springs is fantastic, with 10 inches up front and 11 inches in the rear. The 2.5-inch front and 2-inch rear remote-reservoir shocks absorb bumps exceptionally well and provide good control over the bumpy, crossed-up roads we encountered 2,500 feet above Ojai. Bent says that although it does well in this kind of terrain, he designed the NAPCO for high-speed off-roading. 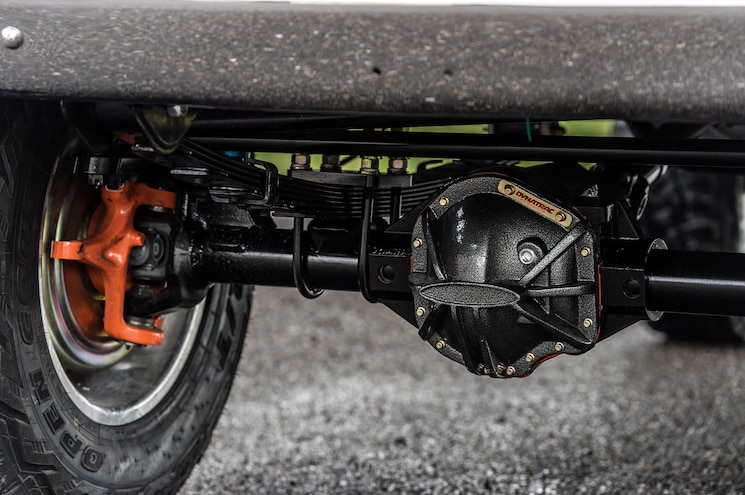 View Photo Gallery | 35 Photos
Photo 10/35   |   1957 Chevrolet Task Force Napco Legacy Classic Trucks Dynatrac Axle
Absent locking differentials, the Chevy instead features a Detroit TrueTrac rear pumpkin to provide lurid powerslides in dirt and sand. Bent jokes that the Power Wagon is a truck for the steep, craggy Rocky Mountains, while the NAPCO is perfect for sandy, dune-filled Southern California. “Take this thing to Pismo Beach and I think it’ll keep up with a Ford Raptor,” Bent boasted. We experienced its impressive off-road chops firsthand, as evidenced by our video courtesy of the Truck Trend Facebook page.
Stepping down from the high-riding truck gave us time to appreciate some of the details. The exterior of the Legacy Classic Trucks NAPCO 4x4 doesn’t look overdone, with factory-style chrome trim, lighting, and finishes. Available in stepside or fleetside designs, the bed features a gorgeous sapele wood floor. Bent says the marine-grade wood will wear in better than high-gloss oak, only requiring an occasional oiling to brighten it up. Vintage tailgate latches look and work perfectly. 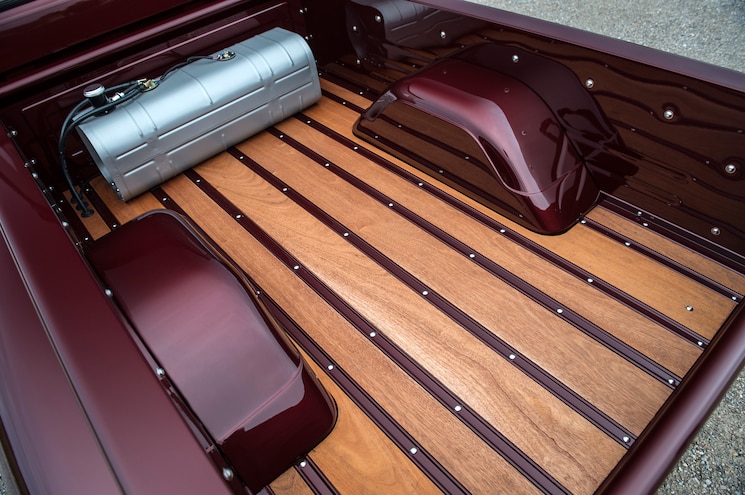 View Photo Gallery | 35 Photos
Photo 11/35   |   1957 Chevrolet Task Force Napco Legacy Classic Trucks Sapele Wood Bed Floor
The retro-mod design theme continues to the interior, where modern HVAC and stereo systems reside in vintage-looking facades. Full instrumentation hides behind an ivory-colored center gauge binnacle, styled in the same radar arc as a vintage Chevy. The bench seat is upholstered in rich leather, a proprietary hide supplied by Horween that will weather and age, resembling a broken-in baseball glove after some use. It also gives the truck a little more vintage appeal, thanks to the leather’s fantastic natural aroma. If any area of the truck lets down the look, it’s the modern bead-lock wheels. If we had the money for a Legacy NAPCO, we’d option the standard steel wheels and dog-dish hubcaps for daily driving and light off-roading, then buy a second set of wheels for hardcore desert duty. 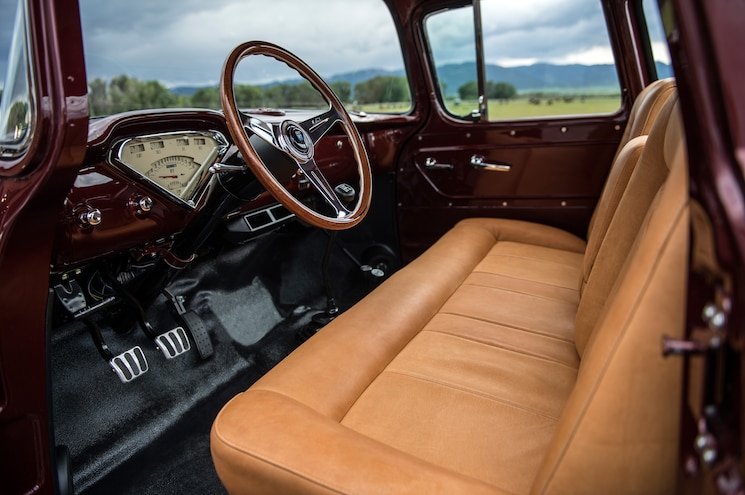 View Photo Gallery | 35 Photos
Photo 12/35   |   1957 Chevrolet Task Force Napco Legacy Classic Trucks Dashboard
With an estimated starting price of $120,000, the Legacy Classic Trucks 1957 Chevrolet NAPCO 4x4 isn’t cheap. But given the popularity of both expensive exotics and pickup trucks, Bent thinks there’s a customer out there, someone who loves pickups and would rather spend his hard-earned discretionary income on a fun, off-road pickup instead of a BMW convertible or Bentley sedan. We have to agree, and if we had the cash, we’d buy one in a heartbeat. In Tartan Turquoise, please. 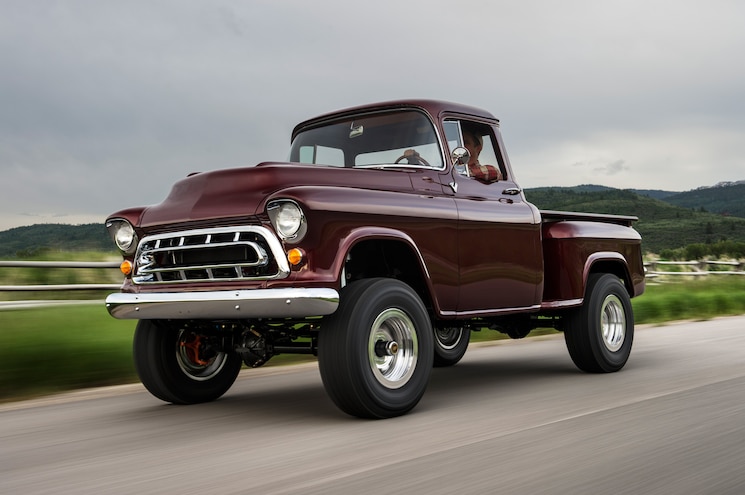