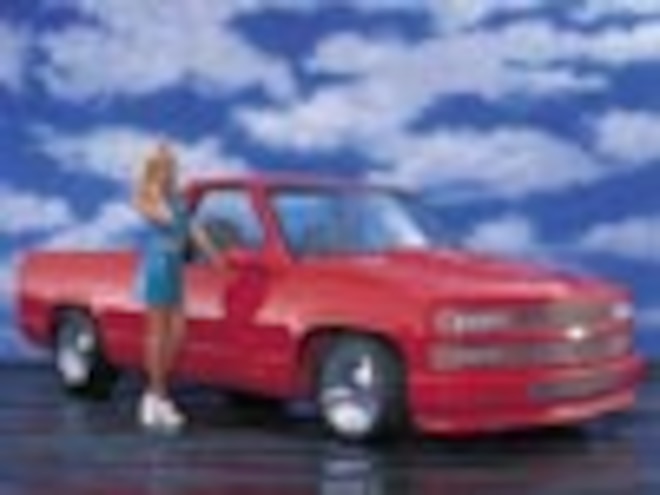 You know, it's true. A dollar just doesn't buy what it used to. For proof, look at the truck on these pages. It cost over 55 large to build this sassy street stiletto. Great balls of fire, man! We remember the good ol' days when a sport truck enthusiast could whip up an ass-kickin' ride like this Bow Tie for, oh, right around $50,000, give or take a few thou. My, how times have changed.
Anyhoo, now that the cat's out of the bag in regards to the cost of this C1500, you're dying to know how the dough was spent, aren't you? What? You're dying to know how to get that much dough of your own? Sorry, we can't help you with that. Besides, if you had a big pile of moolah to spend, how could we be sure that you'd spend it to build a custom street truck? You just might be the type who'd spend it on wine, women, and song. Hmmm. All right, enough already. Now, back to our story....
When John Bohannon turned his thoughts to the precise manner in which he would build his version of the ultimate street truck, he didn't mess around. What he dreamed up was unique and could be described as having the best of both worlds: Corvette drivetrain and suspension, Chevy truck sheetmetal. Yikes! Talk about genuine Chevrolet!
With the plan laid out, John went to work, tearing into the hapless half-tonner, tossing out everything related to a C1500 drivetrain and scrapping the entire suspension, lock, stock, and leaf springs. After acquiring a wrecked '92 Corvette (that's another story), John and the guys at Robinson Racing scrutinized every detail with an eye to suspension geometry and general fitment of the Corvette's suspenders.
Then, the Vette was summarily relieved of its front control arms and related hardware, along with the entire rear independent suspension. Knee-deep in Corvette underpinnings, the guys went to work, adapting, fabricating, switching, and swapping just about every suspension component in an ultimately-successful effort not only to fit the Corvette parts to the truck's chassis, but to make the whole thing function and perform in a desirable manner. With the custom suspension setup, no lowering kit was necessary as the control arms and coilover shocks were positioned on the truck's frame at a point where 4 inches of front drop and 6 inches of rear slam were built in.
Compared to working on the suspension, swapping out the stock '92 truck small-block and swapping in a '94 Corvette small-block was simple. The LT1 engine is basically stock although a few dress up goodies were added. The biggest hassle was getting the electronic management for the 5.7L aluminum engine hooked up and online. After much research deep into the pages of GM service manuals for both vehicles, John was able to wire-up a custom harness that allows an interface between Corvette and C1500, one which has proven to be both functional and reliable.
That beautiful Chevy body is stylishly clean and oh so very smooth. It got that way through much effort on John's part--and we mean personal effort. You see, John is a full-time body and paint pro at Corvette Limited in Cookeville, Tennessee. The body mods include swapped-in Caddy taillights and a third brake light, a molded-in fiberglass bedliner, and shaved door handles. Bolt-ons include a fiberglass hood, a billet grille, a custom front bumper, and a front spoiler, all of which came from Hunter's Custom Automotive. John fabbed the rear roll pan, then stitched the tailgate shut, once and for all.
Porsche Guards Red was sprayed, rubbed, sanded, and polished by John. As you can see, he knows his stuff. The hauler's interior got its share of upgrades in the form of swapped-in leather-covered seats, door panels, and a dashboard, all donated by a '96 Chevy Tahoe. A stock Tahoe steering wheel was deemed not stylish enough for John's truck so a Billet Specialties Eagle tiller was fastened into place. David Wornbles helped John out with the tasty inside conversion.
Holy rollers, Bohannon! Where'd you get them wheels? Oh, from that little ol' aluminum carver Boyds. They're dubbed Boyds Twister and they're nicely wrapped with super-sticky BFG Comp T/As.
Now John and his wife Sandra get to cruise the highways and byways that crisscross the South in a hot-rodded red hauler. Have fun, you two, but don't go too far, because the staff of Sport Truck has an idea for a new project that we think John should take a whack at: Take one part Dodge Dakota, add two parts Viper, and then...
Just give us a call when it's finished, would ya, JB?

- OF
By Joel Mollis
2 Articles