Honey, I Shrunk the Peterbilt! 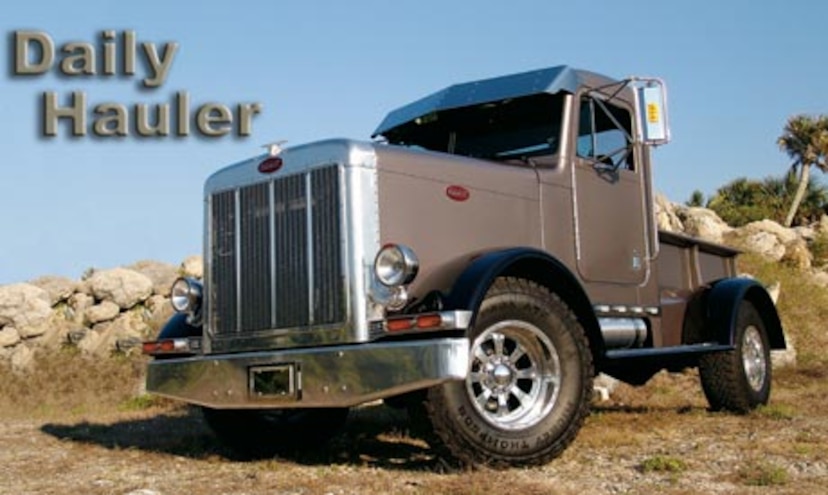 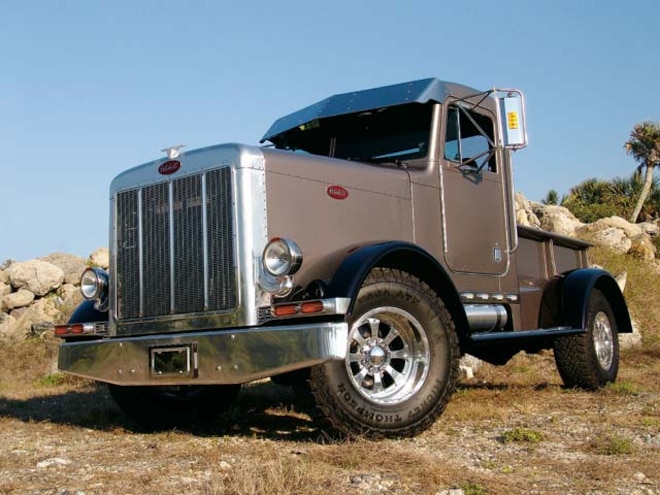 View Photo Gallery | 13 Photos
Photo 2/13   |   2005 Dodge Ram Cummins Peterbilt front Angle
Our twist on that old movie title is not quite accurate. What looks like an 18-wheeler that's been left out in the rain is actually a combination of high-tech parts, six months of hard work, and lots of imagination.
It's the brainchild of Greg Severt, owner of Severt Trucking, a long-haul operation with more than 40 trucks, headquartered in Jacksonville, Florida. Greg has owned a dozen or so custom vehicles in the last 30 years, but they've just been for fun. When it comes to work, "I've had Peterbilts all my life," Greg said. "And I've always thought about setting one on a pickup frame." That's just what he did. What you're looking at is a combination of a fullsize Peterbilt cab, complete with a tilt front end mated to a fullsize Chevrolet pickup bed. The custom body rests on a 1-ton '05 Dodge Ram chassis. Greg knew the idea would work after having seen a similar approach on a Chevrolet a couple of years ago at a truck stop in Arizona. He began searching for a wreck, hoping to find one that was only a couple years old with damaged sheetmetal, but Greg had no luck. Rather than give up on the idea, he bought a brand-new Dodge and drove it less than a week before tearing it apart. 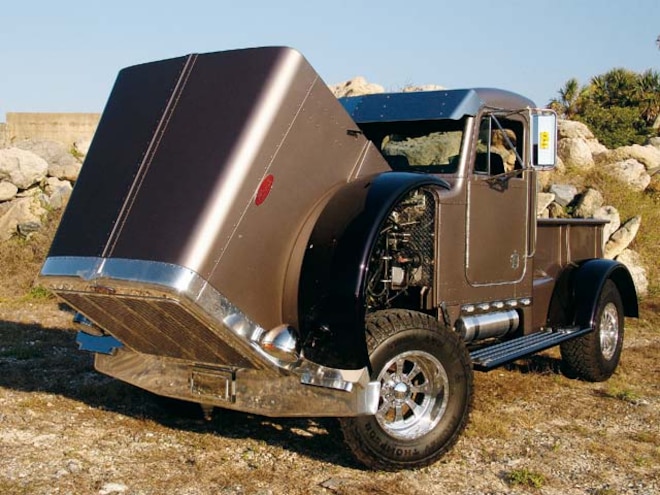 View Photo Gallery | 13 Photos
Photo 3/13   |   Just like the big rigs, Severt's truck has a tilt-forward front end to allow for engine access, with gas struts holding it in place.
Starting with the factory-fresh, '05 Dodge 3500 Ram pickup, equipped with a Cummins turbodiesel and four-wheel drive, Greg's head mechanic, Mark Kalina, began measuring the truck. They already had a '94 Peterbilt cab and hood in the shop, and they located an aftermarket bed designed for a fullsize '53 Chevrolet. Like almost every custom that's built from the ground up, the process began with the wheels. To get the aggressive look he was after, Greg chose 20-inch Weld Racing rims wrapped with 40X13.50-R20LT Mickey Thompson Baja ATZ tires. 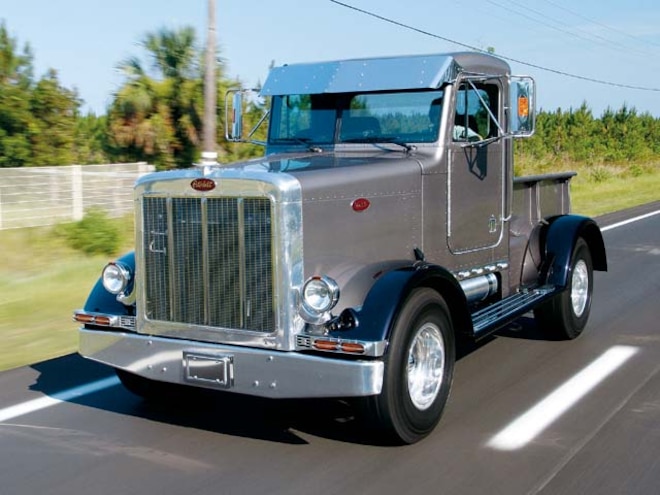 View Photo Gallery | 13 Photos
Photo 4/13   |   Rolling down the highway, the 380hp truck is in its element. Lighter than the original Dodge, thanks to its new aluminum cab and energized by a Bully Dog chip, the truck is quick and gets about 20 mpg.
With the big wheels mounted on the stripped Dodge 1-ton chassis, the tilt front end from the Peterbilt was hoisted into place and adjusted until the wheel openings matched the front tires. Once the fenders and wheels were centered, the cab was mated to the hood and the assembly was attached to the Dodge chassis. The bed was mounted to the rear of the cab, and the pair of shortened Peterbilt fenders were centered over the rear tires to create a Stepside look. Mark shaped the sheetmetal that covers the gap between the bed and the new running boards, then constructed a rear pan to hold the four Corvette-style, LED taillights.

View Photo Gallery | 13 Photos
Photo 5/13   |   The only difference is that you'll find a 5.9L, six-cylinder, High Output Cummins diesel engine instead when you lift this hood.
The '05 common rail Cummins still drives the Dodge, but lots of changes occurred under the hood. All of the engine components that were mounted on the inner fender panels had to be relocated. Luckily, there were about 18 inches between the new firewall and the motor, just enough room to create a platform for the twin Optima batteries and much of the truck's electronics. Peterbilt support rods run from the firewall, bracing the stock Dodge radiator and air-to-air intercooler. The bracing was important because the radiator remains in place when the cab tilts forward. The air conditioning system uses the engine compressor from Dodge that Mark mated to the Peterbilt components in the cab. He also shortened the front framehorns by 2 inches and fabricated a bracket between the chassis rails to support the hinge for the tilt-forward hood.

View Photo Gallery | 13 Photos
Photo 6/13   |   Using the space between the engine and firewall, builder Mark Kalina fabricated a shelf to hold the auxiliary Optima Red Top batteries and many of the engine components that were relocated from the original Dodge fenders.
Because of the large tires, the truck had to be lifted slightly to ensure the wheels fit properly in the fenderwells. A 4-inch Tough Country lift was all it took for the front, with a 2-inch lift in the rear. Outside custom touches include the sun visor, an aftermarket unit designed for the Peterbilt along with an auxiliary light bar and twin air tanks that currently work the air horns. They will soon be connected to an air suspension designed for the truck. If the step plates on the running boards have a familiar look, it's because they are aftermarket pieces originally designed for a Harley. Side trim pieces from the JC Whitney catalog complete the running board makeover, while oak planks separated by polished stainless steel strips add a classy touch to the bed. Greg found an aftermarket Ford truck bumper that fits the bed dimensions perfectly. The stainless steel exhaust system exits through a pair of huge rear pipes.

View Photo Gallery | 13 Photos
Photo 7/13   |   The luxurious cab combines highly polished wood floors, door panels, and plush Bostrum seats.
Surprisingly, the cab itself was not cut or modified. The only changes are to the dash, which now sports a custom wood veneer. Stock Dodge instruments, accented with a Mark Kalina-built aluminum surround, occupy the lower portion with new auxiliary gauges added above. The truck uses the original Dodge four-speed automatic transmission with the four-wheel-drive selector mounted on the highly polished, tongue-and-groove, wood floor. Door panels also sport Peterbilt accessory wood trim panels. To ensure comfort, no matter how far you travel, the seats are Bostrum Wide Rides, just like you find in the big rigs. Working in his spare time, Mark built the truck in about six months, finishing the job by spraying the truck cab with Dupont Imron Galaxy Silver, using black for the fenders.
How is the truck to live with? Greg drives the truck regularly back and forth to work, getting about 20 mpg. The hybrid is actually lighter than the original Dodge, thanks to the aluminum cab and front end. Greg fully intended to use it every day, but found the truck attracts so much attention that it's sometimes difficult to make it to the office. Greg does plan to show his Peterbilt/Dodge hybrid at truck shows around the country and enjoys driving it at every opportunity.One final note. He told the Dodge dealer when he was signing the papers that he was going to strip it down and make a hot rod out of it. "I still have to go back to that boy and show him," Greg said with a smile.