It's a Common-Rail World 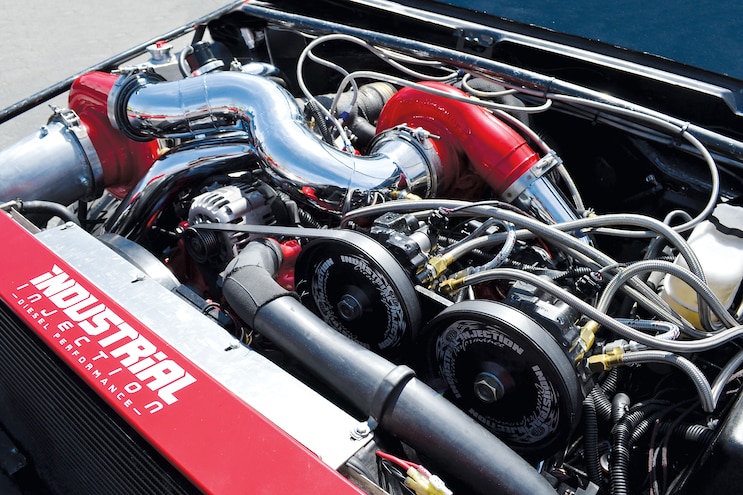 There are certain key components in modern diesel-powered pickup trucks, cars, and SUVs that make these vehicles what they are today. Turbochargers, for instance, are a given among passenger vehicles, as the painfully slow naturally aspirated diesels of the past are all but forgotten. Another necessity found in the new crop of diesel-powered rides is common-rail fuel injection, which is found in virtually every new road vehicle produced in the U.S. and Europe, as well as in most off-road platforms. We hear the term "common-rail" all the time, but what exactly is a common-rail, fuel-injection system? 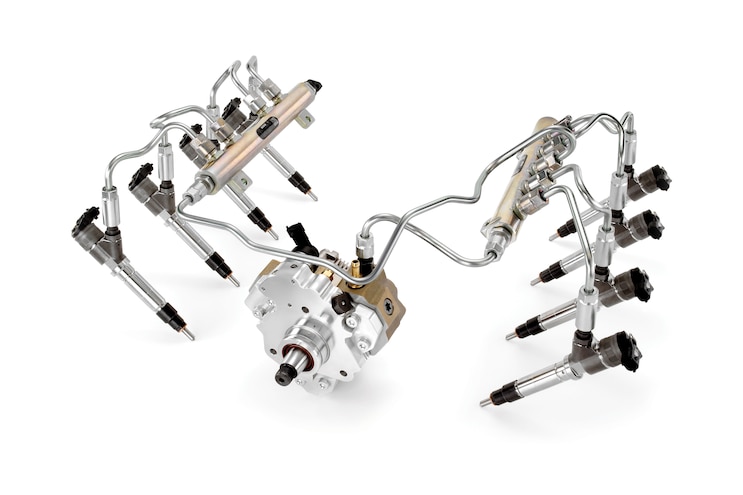 View Photo Gallery | 13 Photos
Photo 2/13   |   Here is a simple view of how a common-rail injection system works. Instead of having one line from the high-pressure pump to each injector, high-pressure fuel is fed into a rail (inline engines) or rails ("V" engines), with a small line from the rails feeding each injector. From there, the injector itself along with the engine's ECU determines when and how much fuel is injected.
In the early days of direct injection, fuel was fed (at low pressure/5 to 20 psi) from a fuel pump (or lift pump) to an injection pump, which then ramped up the pressure to 15,000 to 25,000 psi, before flowing through separate lines, into the injectors and the engine. This immense amount of pressure is needed because modern diesels are direct-injection engines; that is, the fuel is injected separately from the air, instead of mixing with it before the combustion chamber. As soon as fuel leaves the nozzle of the injector, it starts burning and creating power.
While this is a good method of making a diesel engine run, there are pitfalls to this type of design. Early diesels are loud because they experience only one big injection event, and their fuel delivery lacks the precision needed for ever-tightening emissions regulations. Even injection pumps such as the legendary Bosch P7100 pump found on Cummins engines lacks variable timing, which is starting to become more and more important. So, what’s the solution? Common-rail injection. 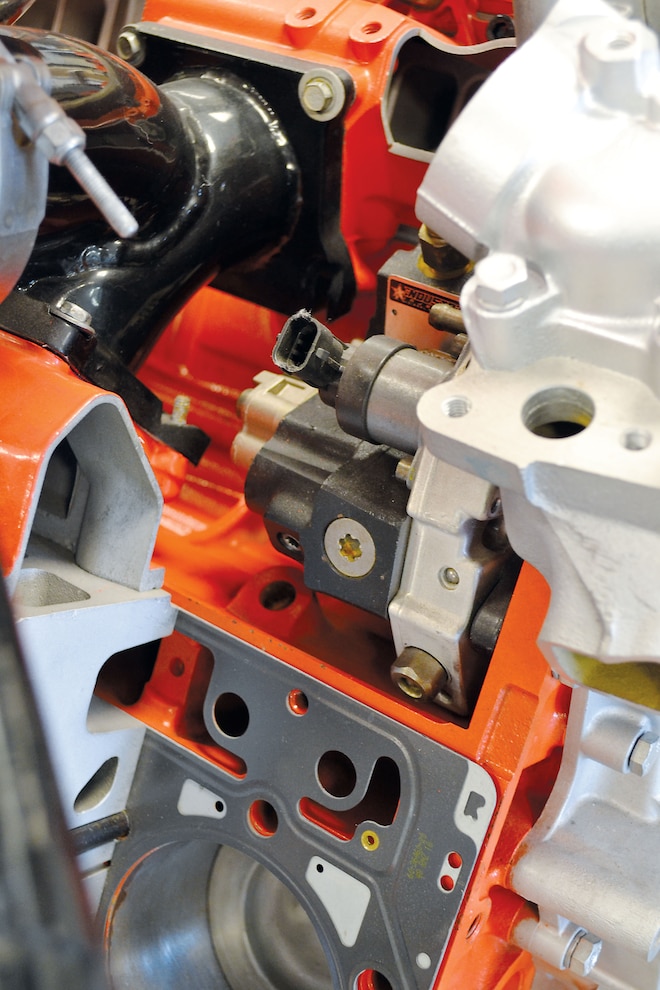 View Photo Gallery | 13 Photos
Photo 3/13   |   The most popular high-pressure fuel pump in the aftermarket is the Bosch CP3, which is shown here on a Duramax cutaway display engine. The pump’s location in the valley of the block makes it fairly hard to get to if it ever needs to be upgraded or replaced.
With a common-rail injection system, high-pressure fuel is pumped through and stored in a rail that feeds many injectors at once, instead of through a pump that directly feeds an injector. The actual injection events transpire with electronically controlled injectors, rather than simple poppet-style units. While this adds a lot of complexity to the injectors themselves, multiple injection events, variable timing, and precise control are now possible.
CP3 vs. CP4.2 vs. K16
There are three different types of common high-pressure pumps used on ’01-to-current GMs, ’03-and-up Rams, and ’08-and-newer Fords. The first unit we’ll discuss is the Bosch CP3 pump, which is available in ’01-to-’10 Duramax-powered trucks and ’03-current Rams. The CP3 is a radial-piston pump that can supply up to 29,000 psi in some applications and is perhaps the most well known and most modified high-pressure pump on the market. 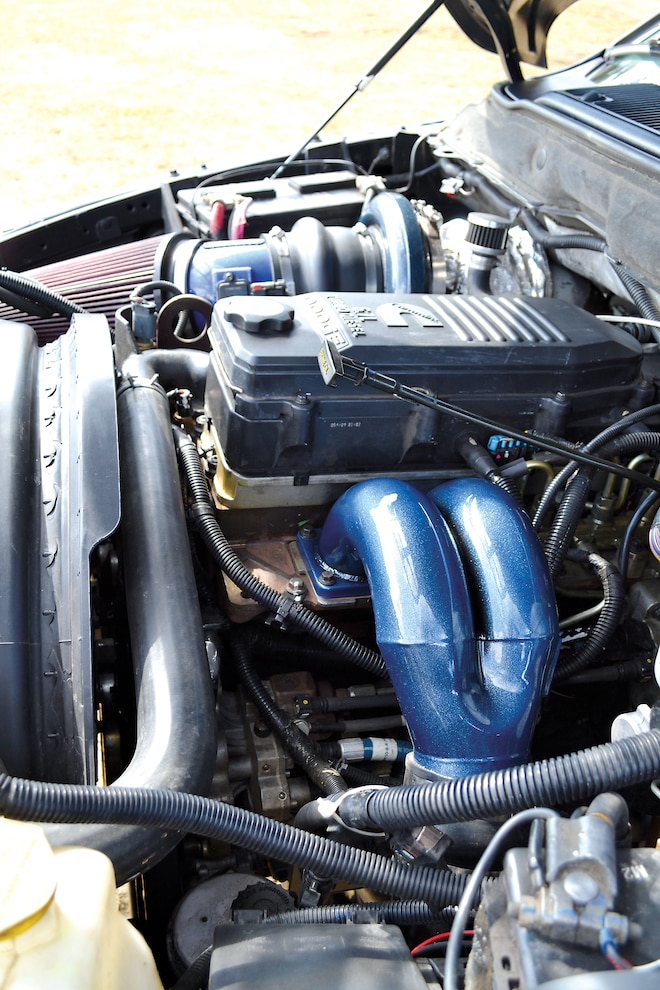 View Photo Gallery | 13 Photos
Photo 4/13   |   By far, the easiest pump to access when upgrading or replacing one is those found on inline Cummins engines. Located right on the side of the block, the geardriven CP3s flow slightly less than Duramax-specific units, but volume is still sufficient for making good power.
Next is the CP4, which is also made by Bosch. Although it has a higher number designation, the CP4 actually flows about 20 percent less fuel than its younger brother, the CP3. Found on ’11-to-present Power Stroke and Duramax engines, the CP4 is a more advanced pump despite flowing less fuel, with external high-pressure circuits and a maximum pressure of 29,000 psi. 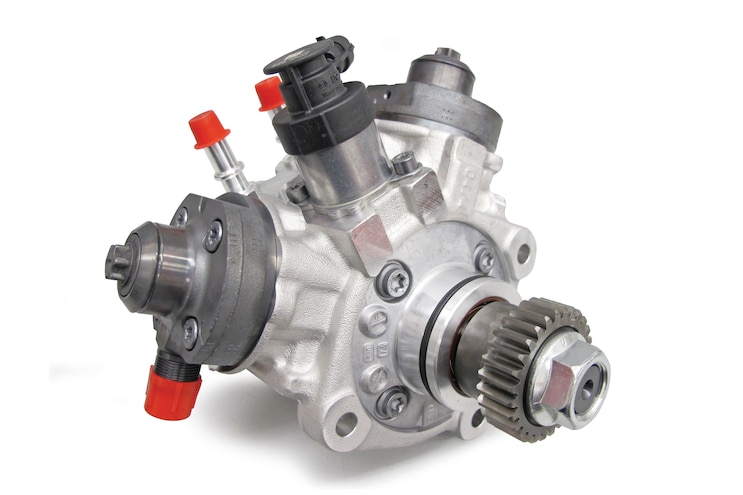 View Photo Gallery | 13 Photos
Photo 5/13   |   The new kid on the block is the CP4, which can be found in new GM and Ford heavy-duty applications. While the CP4 doesn't put out quite as much volume as a CP3, the pumps are still very capable and can support more than 500 hp in stock form.
Last but not least, is the big daddy of the group, the Siemens VDO K16, which can be found on ’08-to-’10 Ford F-250s and F-350s. In addition to compound turbochargers, the K16 pump is a big reason why 6.4L engines in these two model years are able to make impressive power, with only simple programming. Maximum pressure checks in at 24,650 psi, but it's the pump's volume that makes it a winner on the Ford engine. 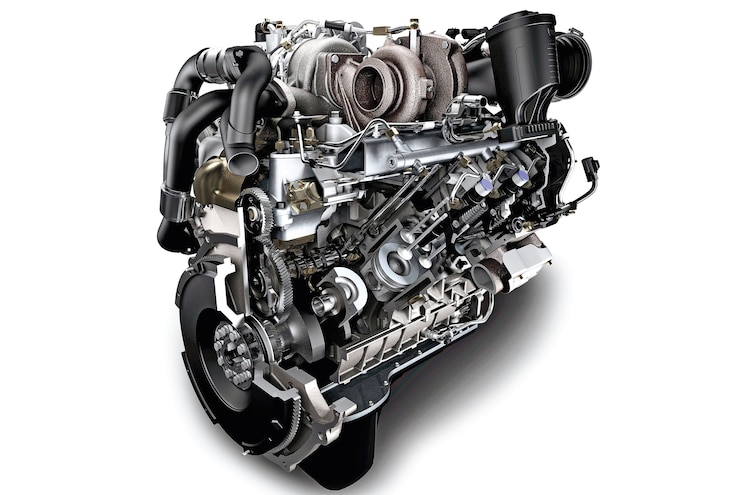 View Photo Gallery | 13 Photos
Photo 6/13   |   While 6.4L Ford engines built from ’08 to ’10 are very strong from a performance perspective, their high-pressure pumps are located in a very hard-to-reach spot: under the turbochargers, at the back of the engine by the firewall. Unfortunately, wiring and regulator issues are fairly common with these pumps, and they often need to be replaced.
Modifying Common-Rail Systems
Like older mechanical systems, electronically controlled common-rail injection systems can be modified to provide enough fuel to support power levels much greater than stock. While exactly how much an OEM fuel system can support varies, in GM, Ford, and Ram ¾- and 1-ton applications, most pumps can handle 500 to 600 rwhp before they'll start draining the rail and pressure drops. 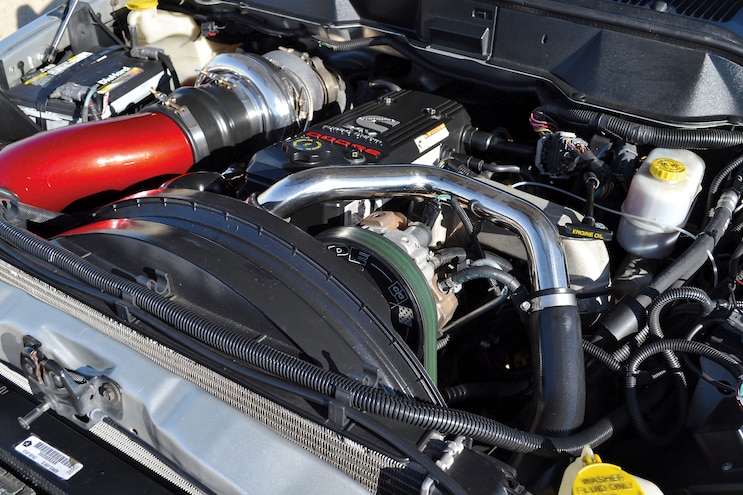 View Photo Gallery | 13 Photos
Photo 7/13   |   Perhaps the easiest way to keep rail pressure up when making lots of power is to add a second fuel pump. Shown here is a PPE kit for a Cummins, which mounts a second CP3 that's belt-driven up at the top of the engine. Not only can these style kits support more than 1,200 hp, but PPE is currently getting many of its Dual Fueler kits CARB- and EPA-certified so they can be run legally in all 50 states.
What's "Draining the Rail(s)?"
Fuel pressure and volume are related in a common-rail injection system. If the injectors demand a much larger fuel quantity than stock, the factory pump and rail system might be able to keep up, but at a lower pressure. While this may not sound bad, the lower injection pressure actually leaves a lot of horsepower on the table, produces more smoke, and creates more heat. When looking for maximum performance, it's crucial to keep rail pressure as high as possible. Doing so ensures power stays up, and it helps keep smoke down. We’ve seen a gain of more than 100 hp at the rear tires (on an 800hp truck), when injection pressure is increased from 22,000 psi to 26,000 psi. Yes, injection pressure is a huge factor in performance.
Twin Pumps
One of the most common (and simple) solutions for increasing volume in a common-rail system is to install a second pump. This is a standard practice for Fords, GMs, and Rams, as installing twin pumps can instantly double the horsepower they can support—to as much as 1,000 to 1,200 hp. Available through companies such as ATS Diesel Performance, Industrial Injection, H&S Motorsport, Rudy's Diesel, and PPE, twin pumps are a common sight on high-horsepower diesels. 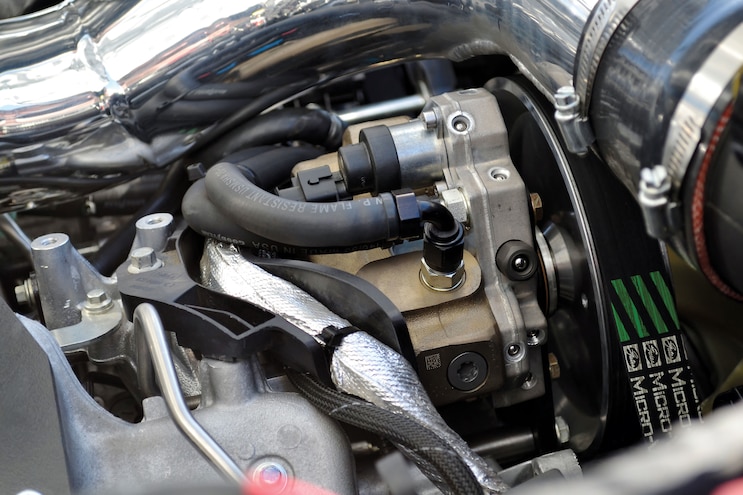 View Photo Gallery | 13 Photos
Photo 8/13   |   Twin pumps aren't only limited to GM and Ram. Here, a second CP3 is mounted on the passenger side of a Ford 6.7L engine, where it works in conjunction with the factory CP4 to create rail pressure.
Modified Pumps
At some point, diesel shops figured out they could modify existing high-pressure pumps for more flow and more pressure. Especially handy for instances when packaging is an issue or a competition class limits a truck to a single fuel pump, modified pumps from Exergy Engineering, Industrial Injection, Fleece Performance, and other companies are a good way to add power-making capability without adding a second pump. These stroker pumps are most commonly available in CP3 form and can flow enough to support 800 to 1,000 hp with just a single pump.
Beyond Twin Pumps
Although modified CP3s provide much more flow and pressure than the stock versions—even when using twin stroker pumps (which is quite a cash outlay)—maintaining rail pressure when performance reaches the 1,500 to 2,000hp range is difficult. Recently, we've seen a number of Duramax and Cummins combinations outfitted with three, four, or even five CP3s, in an effort to try and keep up with the mammoth 400- to 600-percent-over injectors that are now being installed in these engines. View Photo Gallery | 13 Photos
Photo 9/13   |   In addition to being driven by belts, second (or third) high-pressure pumps can be operated directly by the engine as well , as shown here on Dmitri Millard's awesome five CP3 setup.
The Future
While we don't know if the trend of multiple pumps will continue in the future, one thing we can say for sure is that common-rail injection systems won't be going away any time soon. As performance and injection pressures continue to rise, look for the industry to develop new products that can meet these needs. 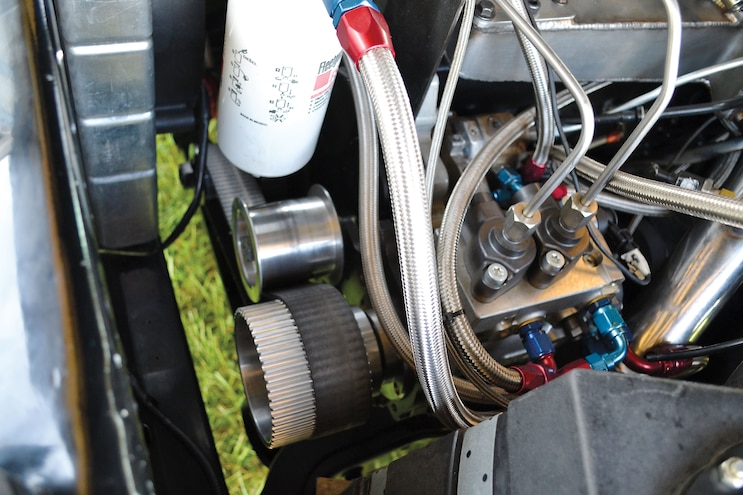 View Photo Gallery | 13 Photos
Photo 10/13   |   Common-rail technology is firmly planted in diesel motorsports, as many competition-only vehicles are experimenting with more and more ways to make power. This enormous single cog-driven pump on Micah Sullivan's race truck has been known to hold rail pressure above 30,000 psi while making 1,800 hp and spinning 6,000 rpm.