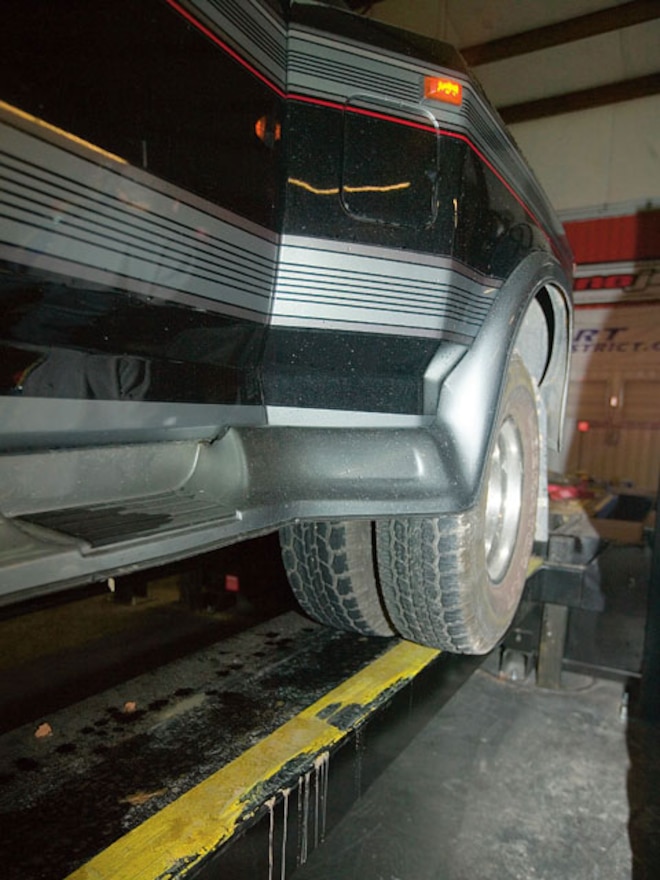 View Photo Gallery | 14 Photos
Photo 2/14   |   Pro Power's Dynojet is wide enough to accommodate dualies without taking off the outside wheels. This made it much quicker to get trucks on and off of the dyno.
Wet weather was not enough to dampen the spirits of New Mexico's diesel enthusiasts at this past December's New Mexico Turbo Diesel Register (NMTDR) Dyno Day. Although the Turbo Diesel Register is exclusive to Dodges, this event was open to all makes and models of diesel trucks. Over 60 pickups representing the Big Three auto manufacturers showed up at Pro Power Dyno Services. Trucks from around the state were rolling on and off Pro Power's Dynojet from sunrise to sunset.
DURAMAX ATTACK
Multiple monitors gave everyone in the crowd a chance to see the numbers that the trucks were putting down at any given time. Additionally, owners had the option of driving their own trucks on the dyno or letting the staff of Pro Power take control. As anyone who has been on the dyno before knows, there is a definite art to loading the truck and keeping it from shifting during the pull. The rollers on the Dynojet weren't the only thing that were smoking.
Jeff Argo, NMTDR president, brought a barbeque and Ron Heer and Chuck Peeples of Valencia County Choppers kept the grill busy preparing burgers and hot dogs all day. Newly Tolf of Underground Diesel brought a large contingent of Duramax trucks with him from northern New Mexico (see a feature on his Duramax on Page 110). Donnie Hodges' LLY-equipped GMC put down 542 horsepower with stock turbo and injectors with EFI Live tuning. Tolf's LB7 Duramax generated 572 horsepower thanks to the BD Super Max turbo and EFI Live tuning.
CUMMINS STRIKES BACK
While the Duramax trucks were putting up big numbers, it was a 24-valve Cummins that walked away with the top honors when the smoke settled. Reymundo Gutierrez came all the way from Las Vegas, Nevada, and made an astounding 616 horsepower while using a High Tech Turbo Quick Diesel 64, Mach 5.5 injectors, an Industrial Injection Hot Rod VP44, and a Smarty tune stacked with an Edge Hot Juice. Gutierrez wasn't the only person to run on fuel only; surprisingly, we did not see any use of nitrous, water/methanol, or propane during the dyno competition.

Three other Cummins topped the 500 horsepower mark as well. Jeff Argo, president of the NMTDR, made 521 horsepower with his 12-valve truck using a Dodgezilla hybrid turbo, Joe Donnelly injectors, and a #0 fuel plate. Luis Otero made 542 horsepower from his 24-valve truck with an IndustrialInjection Super Phat Shaft 62 turbocharger, Diesel Dynamics injectors, and a prototype Quadzilla Adrenaline race box. One of the most unique vehicles was Clayton Spurgeon's '95 F-350 Crew Cab. The Ford has been fitted with a 12-valve Cummins with PDR Towing Twins and a #0 fuel plate that generated 532 horsepower on the dyno.
When the smoke cleared, 21 trucks had made multiple pulls on the dyno. Underground Diesel Performance, Auges, TSI, Desert Rat, Valencia County Choppers, and 4Wheel Parts all donated prizes to the New Mexico Turbo Diesel Register. A raffle ensured that even those who did not post the highest horsepower numbers could still walk away with a smile on their faces. Before the event was even over, there was already talk about the next NMTDR Dyno Day, with plans for even greater prizes and extra time to ensure that more trucks get on the dyno rollers. Check www.nmtdr.com for dates, and show up to see if anyone can wrestle the horsepower title away from Reymundo Gutierrez.