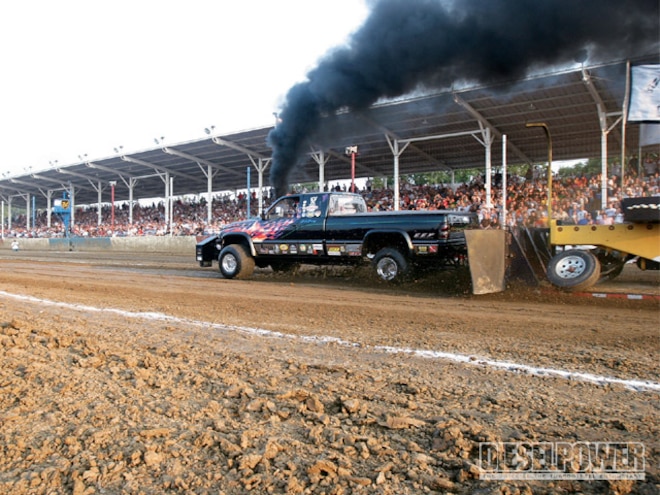 View Photo Gallery | 32 Photos
Photo 2/32   |   2008 Scheid Diesel Extravaganza sled Pull
One diesel event you don't want to miss is the Scheid Diesel Extravaganza, held every year in Terre Haute, Indiana. Dan Scheid is the man behind the scenes, and over the years he's built up his yearly gathering to extraordinary proportions. How about more than 60 sled pullers for the 2.8 class alone? Just as many were in Work Stock, and twelve Modified trucks showed up to give the crowd a feel of what 1,500-horsepower diesels really sound like. There was also eighth-mile drag racing, where six-second elapsed times in full-weight trucks were recorded. That's high 9s in the quarter, folks. The Scheid dragster made an appearance, running in the 4.50s in the eighth at almost 160 mph. There were two chassis dynos, and between them almost 200 trucks hit the rollers that weekend. Since this is our "Top Ten" issue, we're going to not only include coverage of the event, but we'll list the top ten pullers in each category, along with the 10 highest dyno numbers. Since more than a few drag trucks had problems, we'll list the five quickest times at the drag strip. Enjoy our coverage of the 2008 Scheid Diesel Extravaganza, and mark your calendars for August 28-30 of next year so you too can see the diesel mayhem in 2009!