Power Stroke Vs. Cummins Vs. Duramax In The Valley Of The Sun 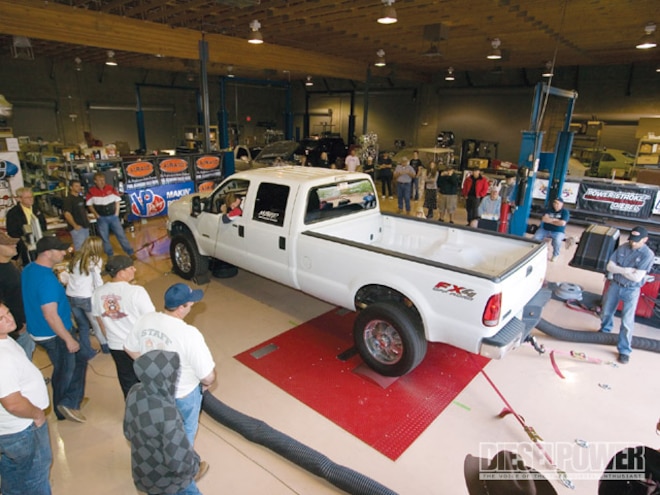 View Photo Gallery | 16 Photos
Photo 2/16   |   bartling Enterprise Dyno Day dynojet
This quote was originally spoken more than twenty years ago to describe Mathew Broderick's character, Ferris Bueller, but it applies today as well--to diesel trucks. At a recent dyno event at Bartling Enterprise in Queen Creek, Arizona ([480] 895-0545, www.bartlingenterprise.com), almost every facet of the diesel community was represented. There were first-generation Dodges next to 6.0L Power Strokes, and LMM Duramaxes parked beside IDI 7.3Ls. The crowd was just as diverse. Diesel fuel has a way of bringing together ranchers, farmers, veterans, engineers, and more. On this dyno day in particular, more than 30 trucks made a combined 100 dyno pulls during the course of the day at Bartling Enterprise. Another 20 diesel trucks showed up just to watch and learn a thing or two about which part combinations make the biggest power. Everyone who attended had one thing in common though: they knew better than to wear a white shirt to a diesel dyno competition.
Dawn to Dusk Diesel
Although the event lasted from sunrise to past sunset, we never saw anyone who looked bored. Brian Bauman worked with Bartling to organize the event and secured door prizes from Earndardt Ford, R&R Marketing, and Power Service. Westpac also donated nearly enough Wix filters for everyone present, so no one went home empty-handed. Outside, Underground Diesel had a display and Dave Bryce from Dmaxcentral.com provided hot dogs, hamburgers, chips, and drinks to ensure no one had to leave the action at the dyno to satisfy their appetite. We think Bryce might have had an ulterior motive for cooking up all of those burgers though, since his '07 Duramax runs on 100 percent biodiesel. He took a break from behind the grille to put his dualie on the rollers and delivered 460 hp with only a 4-inch MBRP exhaust and custom tuning he did himself with EFILive.
Despite the rugged reputation of the Allison 1000 transmission, most Duramax owners at Bartling had upgraded their torque converters, valvebodies, and clutch packs before they touched their injection pumps or injectors. EFILive was the tuning of choice for the Duramaxes, but there were a few trucks that put up big numbers with PPE programmers as well. Several GM trucks made more than 450 hp and a few passed the 500hp mark with factory fuel systems and stock turbos. Brandon Brink made 588 hp with his LB7 engine and took Second Place honors with a 66mm HTT turbocharger on top of his Duramax. Similarly, Jeff Pehrson was right behind Brink at 577 hp with a PPE turbo atop his LBZ engine.
This party was not exclusively for GMs though. Several Cummins-powered Dodges spun the rollers, with Rob Stoech at the top of the list. His twin-turbo'd common-rail engine made 542 hp--enough to keep up with most of the Duramaxes. Even the Power Strokes, normally the underdog on the dyno, were well represented. Brody Smelter, Josh De Jong, and Brandon Rich made big power from 6.0L engines outfitted with huge turbos and upgraded fuel systems.
Ford Dyno King
In fact, it wasn't a Chevy or Dodge that took top honors at Bartling Enterprise. That distinction was reserved for Chaz Lightner and his 12-valve Cummins-powered Ford Super Duty. A generous dose of nitrous and compound turbos from Turbo Auto Diesel helped Lightner make 651 hp, and take home a new rear differential cover from ATS in the process. A Ford Super Duty driven by an engineer with a Cummins engine under the hood. The win seemed strangely appropriate on a day that was filled with so much diversity. We think that Ferris Bueller would be proud.