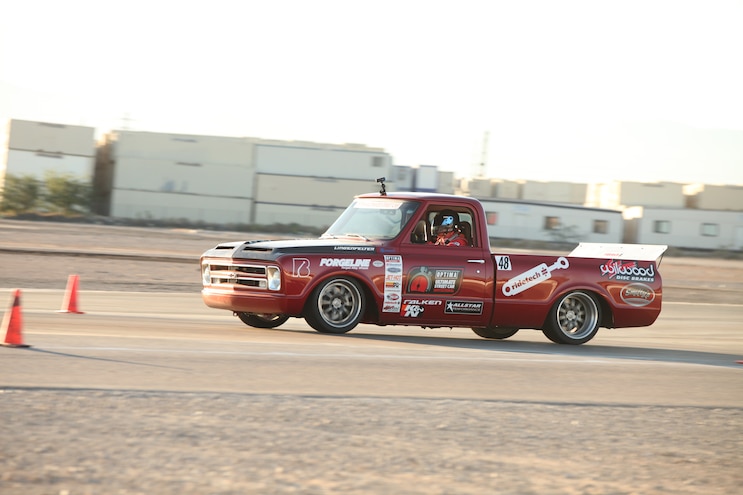 There’s a stereotype that trucks don’t necessarily make good performers, and typical of many stereotypes there’s a small shred of truth to it. The thing that makes trucks utilitarian, a lightweight rear that is over-sprung to carry a payload, also make them terrible at transferring weight. Any chassis tuner will tell you that weight transfer is the key to acceleration, whether in a straight line or laterally. With new upgrades, that has changed over the past generation. Drag racers discovered ways to tune around shortcomings to make trucks transfer what little rear weight they have to launch hard. And more recently, encouraged by the whole G Machine movement, truck enthusiasts learned to apply those principles to lateral forces. Translation: a few diehards discovered how to make trucks do unlikely things, like handle.
Simultaneous to this new movement (and possibly an inspiration for it) is the Ultimate Street Car Association, a sanctioning body formed to give modified, road-legal vehicles a more dynamic forum in which to flex their more dynamic muscle. The organization judges entrants in four ways: in a non-competitive road rally, a speed-stop sprint, an autocross, and a full-on road course. The USCA consists of a series of 10 annual races in various locations around the country that culminate at an invitational event that followed the 2014 SEMA show in Las Vegas, Nevada. The event, sponsored by Optima Batteries and dubbed the Optima Ultimate Street Car Invitational, occupies two fields for its three speed contests with a paddock for the autocross, a segment of the road course for the acceleration/stop contest, and a full road course. 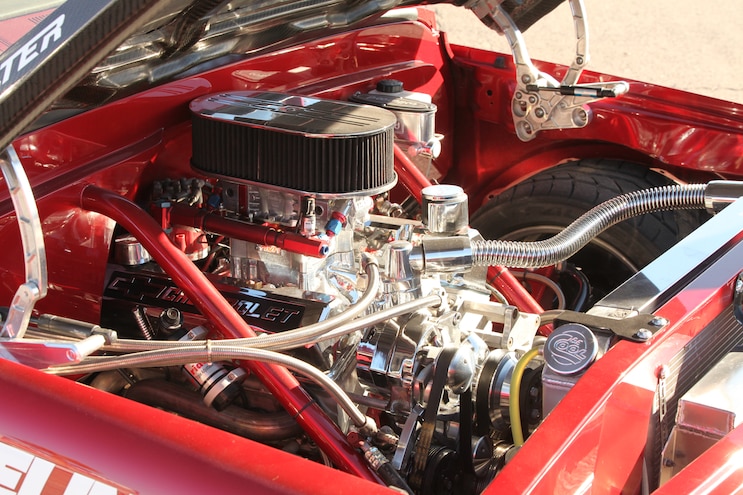 View Photo Gallery | 41 Photos
Photo 2/41   |   2014 Ousci 04 Chis Smith C10 Engine
Though intended to test production cars and hot rods, the association has taken it upon itself to let trucks participate. While early examples didn’t exactly set the world ablaze, subsequent entries have proven quite competitive, in some cases beating high-end, purpose-built sports cars. This year four pickup teams competed. Veterans Chris Smith with his red C10, Wes Drelleshak returned with his ’59 Apache, as Bob Bertelsen and Brandy Phillips made an impressive splash with their freshly completed C10s.
Though shiny, Smith’s truck is the dark horse of the bunch in the sense that it primarily resembles a show machine, but beneath that glossy exterior it sports a RideTech suspension fore and aft, an eight-point cage, and an extremely healthy 434-inch Gen I small-block Chevrolet backed by a six-speed Tremec T56. Though at face value his 31st-place finish seems a bit of a backslide from his 22nd placement last year, bear in mind that last year only 54 vehicles competed whereas this year 91 showed up. Among the racers he beat were James Stancel’s winged AMG C63 Benz and a Nissan GT-R. What’s especially noteworthy is that Smith’s pickup still maintains its utility with a fully functional bed.
With red patches showing through black primer, Drelleshak’s well-seasoned pickup is probably the least likely looking machine. Yet at 37th place it proves his chops and that the truck is well capable of beating 60-percent of the field. Though Drelleshak maintained the majority of his pickup’s chassis as well it takes over the No Limit place in west coast truck competition by bearing the company’s suspension at both ends. What’s especially noteworthy considering his high standing is a rather conventional 383 Chevy and five-speed Tremec TKO600. Among his conquests are a Porsche GT3RS, which is the company’s FIA-homologated track car for GT competition. It goes to show that prep and skill really can go a lot further than trick cars and parts. 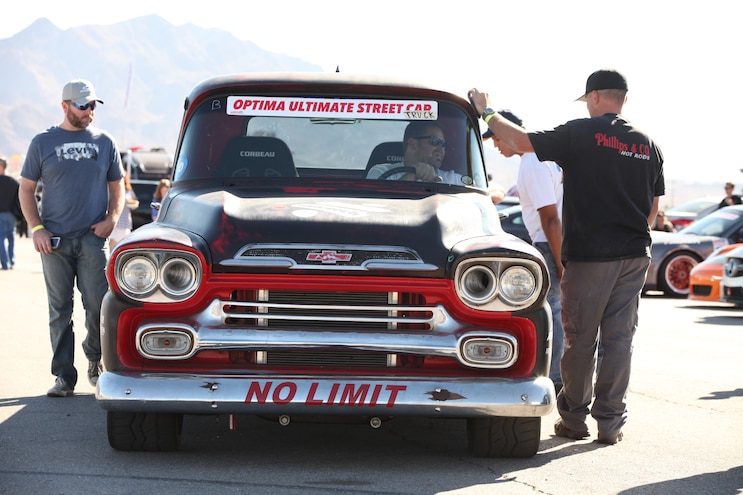 View Photo Gallery | 41 Photos
Photo 3/41   |   2014 Ousci 12 Wes Drelleshak Apache Grille
A fresh build, Bertelsen’s Orange Rush C10 is truly a force of engineering. He built the chassis from scratch using Detroit Speed’s X595 front and Quadra Link rear suspension. Noteworthy are the presence of JRI’s innovative height-variable hydraulic/coil dampers and the linear-actuated duckbill that raises to improve high-speed tractability. It also boasts the most advanced drivetrain, a Kurt Urban-built LS7 that churns out a whopping 600lb-ft and 648HP with a Bowler-prepped Tremec T56 Magnum. Though the pickup exhibited a few minor issues it finished 45th, better than half the competitors, including a Lamborghini Gallardo and a Mercedes SLS AMG if you can believe it. He pushed it hard too, sliding right into the outfield at one point.
We were most interested to watch is the truck that was fielded by husband and wife team of Brandy (driver) and Rob Phillips. Like Bertelsen’s it’s a purpose-built track machine that pushes the boundaries of what makes a road-going machine but no more than many of the passenger cars do. It too rides on a Detroit Speed front clip but they diverged with a Hotchkis Sport Suspension four-link. Also like Bertelsen’s it foregoes a bed floor and has a custom bed cover. An entirely new truck, the C10R is still in its teething stage with its driver earning her track legs and racking up hours in the driver’s seat. Despite all this she earned a respectable standing at 67th making this a team with great potential.
Without a doubt trucks are not only here to stay, they’re proving a nuisance for their smaller, better balanced, and more aerodynamic sports car counterparts. Go to http://www.optimabatteries.com/en-us/experience/optima-invitational to see all the results and future events for Optima Ultimate Street Car Invitational. 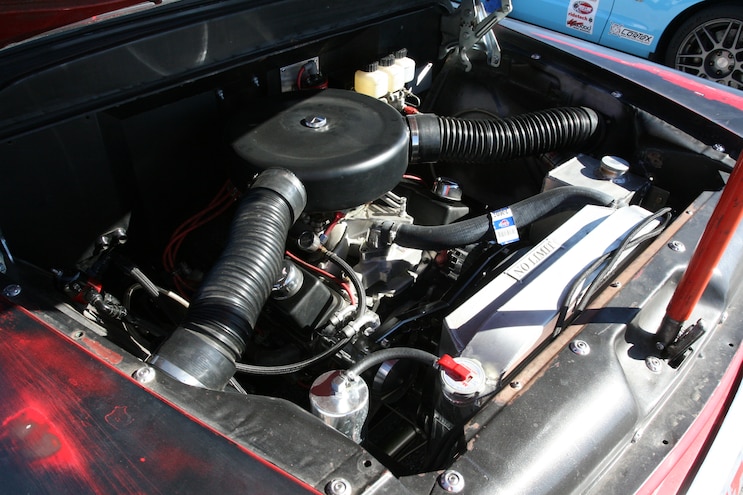 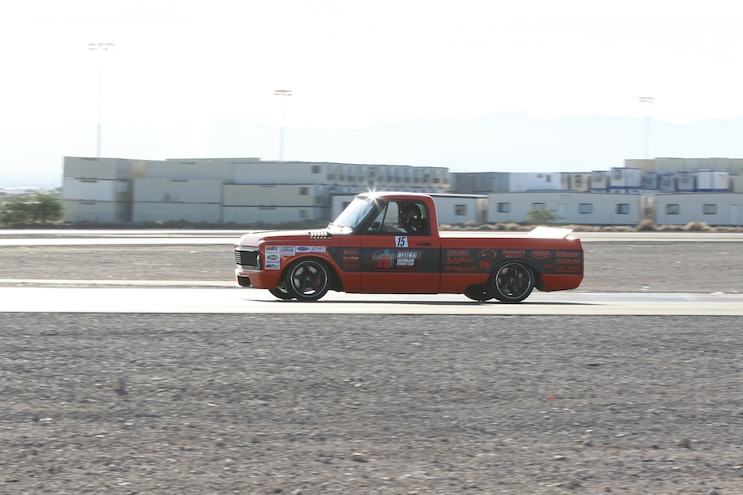