Largest Combined Car Show and Swap Meet in the US 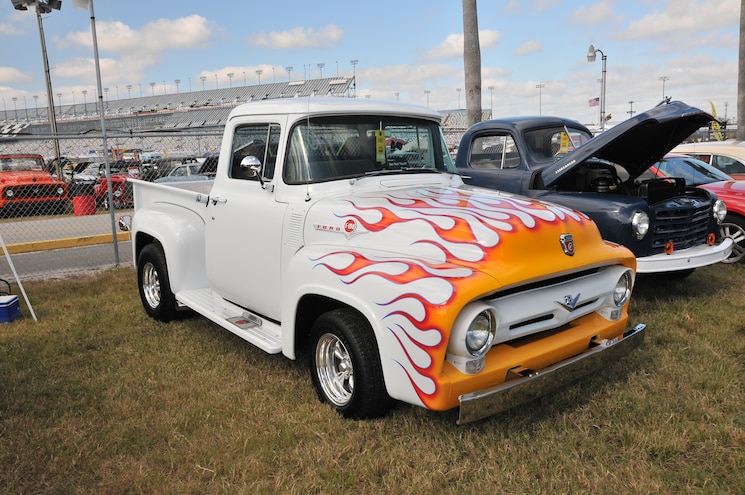 Car and truck shows are always great fun. Sometimes the goal is a trophy while other times you’re just looking for a great weekend with friends. There’s an annual event in Florida that’s all about good times, primarily because there are no trophies at all. No elaborate detailing is required prior to arriving or waiting around for judges. There aren’t any. Give your truck a quick once over, pull in, park, and enjoy the huge collection of vehicles on display inside the Daytona International Speedway. The annual Turkey Run is all about fun and has been entertaining car and truck enthusiasts for more than four decades. Held over the four-day Thanksgiving Weekend, November 27-30, the show draws drivers from around the country and has a large international following as well. This year, more than 140,000 spectators passed through the gates to see the collection of 5026 vehicles on display. Hot rods, street rods, restored originals, and radical customs, along with an impressive gathering of cool trucks makes this is an enthusiast’s dream. The event has a ‘rolling 30’ rule so the 1984 or older vehicles definitely give the event a classic atmosphere. While there were hundreds to choose from, easily one of the coolest classics at the event was the unveiling of Bobby Allison’s 1950 Studebaker pickup, completely restored and running a turbocharged Buick Grand National drive train. The talented team at Our Dream Auto Museum and Restoration got lots of initial input from Bobby but kept the truck under wraps until the unveiling at the show. He was clearly moved when he first saw the spectacular build.
The amazing variety of vehicles however, is only one part of this mega event. If it was time to trade, the Car Corral had fifteen hundred available spaces and all were sold out early the first day. Hundreds of vehicles changed hands in what has become Florida’s most unique weekend car lot. But there’s more. If your old F-100 back in the garage needed some parts, you could find them at the show, thanks to the twenty-five hundred swap meet vendors who added a third segment to this well-rounded show. Shiny and new or rusty and dusty, the acres of parts were a gold mine for anyone’s restoration project back home. 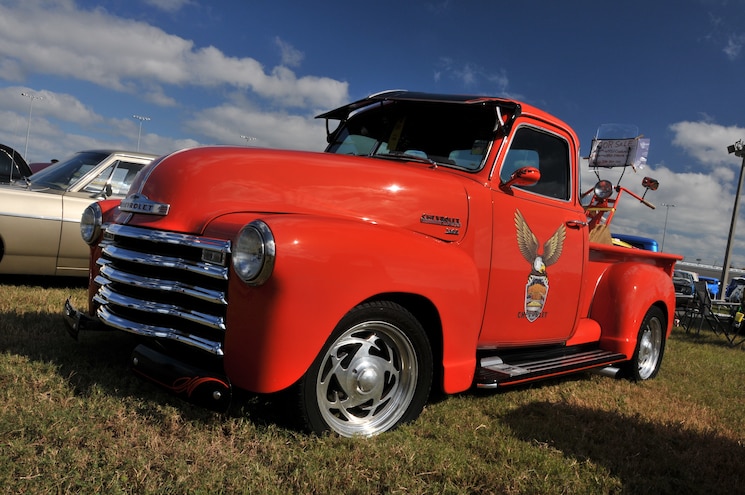 View Photo Gallery | 66 Photos
Photo 2/66   |   Bill Pope from The Villages, Florida, pressed his 1951 Chevy truck into service as a motorcycle hauler.
Since traveling around the equivalent of a small city takes its toll, relax at one of the dozens of food vendors and replenish your energy levels. Grab your folding chair Friday and Saturday afternoon and join the crowd waiting to hear their number called at the great door prize giveaway. More than $13,000 worth of significant door prizes went home with new owners, all of whom were already having a good time! High-performance Ford and Chevrolet crate engines were raffled off along with a beautifully restored 1970 Mustang, complete with a 5.0L V-8 and automatic transmission. Proceeds from the raffles are used by the host club, the Daytona Beach Street Rods in their continuing support of area charities. The club has donated more than $7 million over the years to worthy causes.
Don’t think the fun stops just because the sun goes down. The evening festivities include the teeter totter (balance your truck exactly in the middle to win), rod jousting (the driver drives while the passenger spears hanging rings), and the blind go kart push (the blindfolded driver gets directions from the pusher). Everybody enjoys the fun, and winners take home $100!
If you’d like to be part of the largest combined car show and swap meet in the country, put this Thanksgiving Weekend event on your calendar now. If you’ve ever dreamed of taking a parade lap on the legendary Daytona International Speedway, that’s part of the fun that happens during the Spring Turkey Run, held the last weekend in March 2015. Get information on both events at www.daytonabeachcarshows.com. 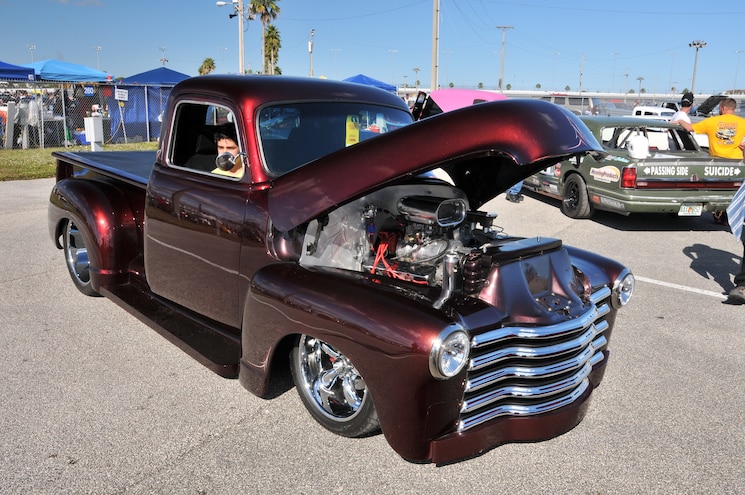 View Photo Gallery | 66 Photos
Photo 3/66   |   There is plenty of power on tap in this Candy Burgundy Chevy, thanks to the supercharged V-8 under the hood. The truck is owned by Paulo Barboza from North Miami Beach, Florida. 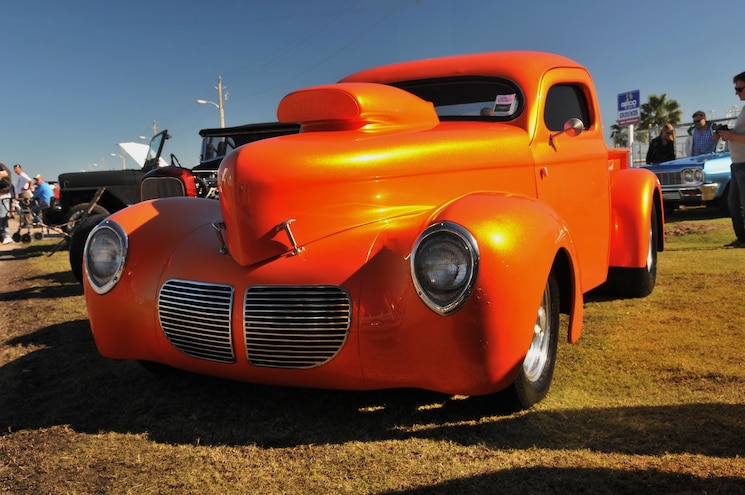 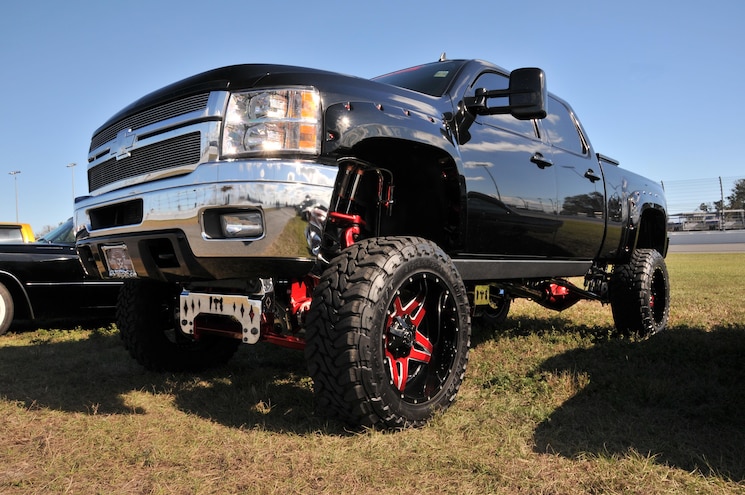 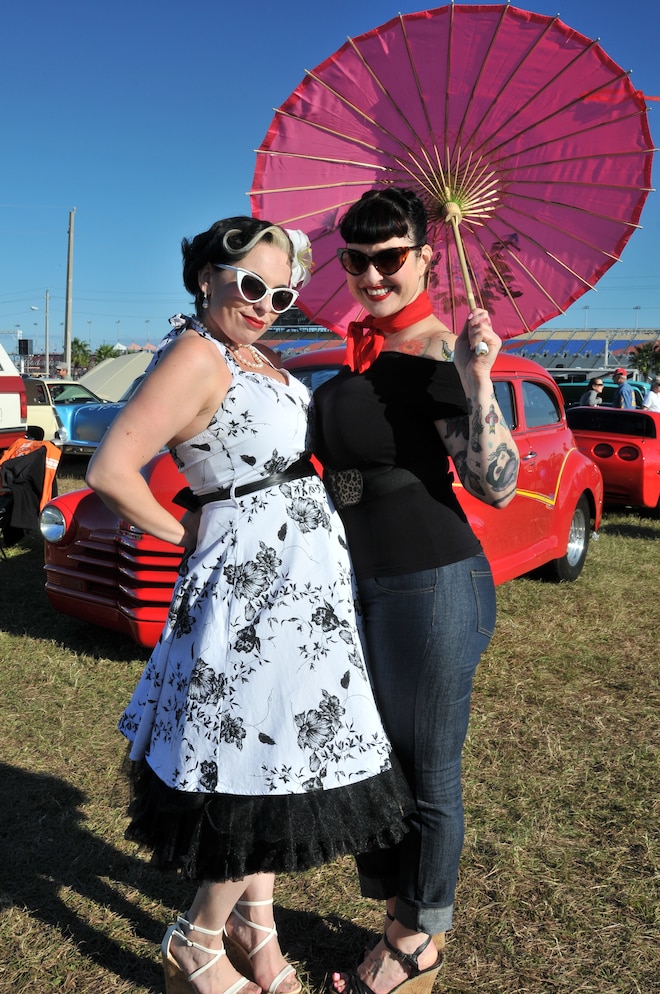