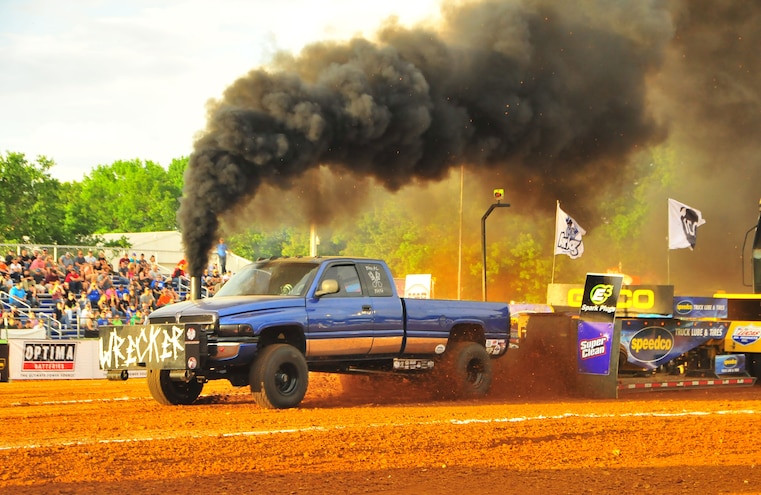 Fifteen years ago, the competition-crazed bunch at TS Performance decided to host their own outlaw race event. No one would have predicted it would end up becoming one of those must-attend events on every diesel enthusiast's yearly calendar. But it has in a big way.
Stretched from two to three days for the 2015 iteration, the fun just grew proportionally. With drag racing at Beech Bend Raceway in Bowling Green, Kentucky, on Thursday and the sled pulls (and show ’n’ shine) on Friday and Saturday at Jim Roberts Community Park in Franklin, Kentucky, there was plenty of time to see and do everything. In years past, a lot of spectators had to leave the dragstrip before the finals were over in order to secure decent parking and a good seat at the sled pulls (held at a different location, about 30 miles away). Now the crowds could see it all, provided they could stretch their weekend to include Thursday! 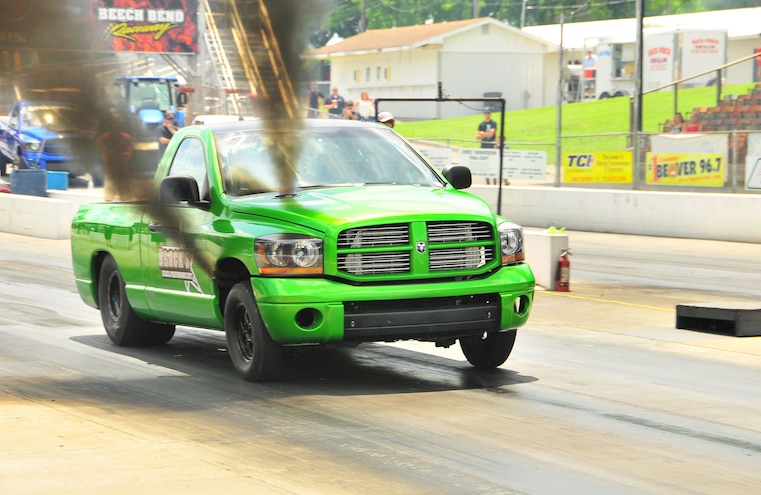 View Photo Gallery | 44 Photos
Photo 2/44   |   Drag racing is vicious. It twists strong metal and makes weak things pop. This Ram was up to the challenge.
Another twist had some classes running the eighth-mile instead of the quarter-mile just to provide an added bit of safety. Still, the throngs were thrilled to see diesel-powered race vehicles going more than 215 mph. Some of the fastest eighth-mile racers were pushing 110 mph. What started out as a drag race to pit hopped-up diesel pickups against each other with a minimum set of rules has grown to include diesel-powered dragsters, altereds and even an occasional diesel-powered car. Hey, it's still an Outlaw event! The fastest run we witnessed was a 6.741-second pass at 215.17 mph by the Scheid Diesel rail. A dyno is always there along with the drags so anyone can have their truck strapped down to see exactly what kind of power it has—and maybe win a bet!
The intensity ramped up significantly on Friday when everything moved from the dragstrip to Jim Roberts Community Park. Vendors’ alley was a virtual showcase of the best parts the industry has to offer. You could stare at a cutaway transmission from DieselSite, ask the Scheid rep about parts for your truck, talk the American Force wheel booth out of a hat, or get detailed info on turbos from one of several booths. The show ’n’ shine was conveniently located close to the sled pull in a grassy bowl. Some trucks parked up on the ridge overlooking everyone else; the effect was a lot of trucks parked in a somewhat planned-out way that made it easy to see all of them (not just row after row of pickups). There's always a few rowdies in the crowd. We've publicized "Bullhorn Guy" before, so we'll skip his photo this year, but we chuckle a lot when he's "on." 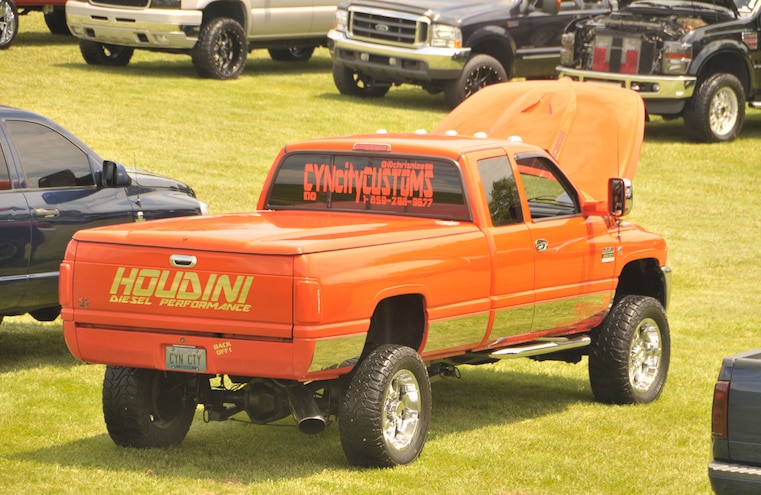 View Photo Gallery | 44 Photos
Photo 3/44   |   Christopher Almeida's orange Ram got a lot of attention during the show ’n’ shine.
The sled pull was a big draw, not just for pickup lovers, but for the surrounding community. The roads get clogged, and it takes some time to get into the park if you don't get there early. There's a good reason for that, as the pulls are very entertaining. Alongside the somewhat stock looking pickup trucks, you've got super-modified pickups, Prostock tractors, Super Farm Tractors, and more. You won't believe it if you've never seen a tractor powered by four Hemis snarling and spitting while dirt flies out from under the massive tires.
Racing wasn't the only action on Saturday, as the hugely popular bikini contest (with a $1,000 prize) took place during a break in the action. Lots and lots of brave women lined up in their bikinis (and more often than not, cowboy boots) for the ogling crowd. It seemed like the rest of the facility was empty during the bikini contest.
Dennis and Sheila Perry, owners of TS Performance and hosts of the Outlaw event, are to be congratulated on their success and their willingness to continue to improve the event with changes and modifications every year. For 2015, they even managed to keep the rain (mostly) at bay so that all the events could be fully completed. Our hats are off to you guys! 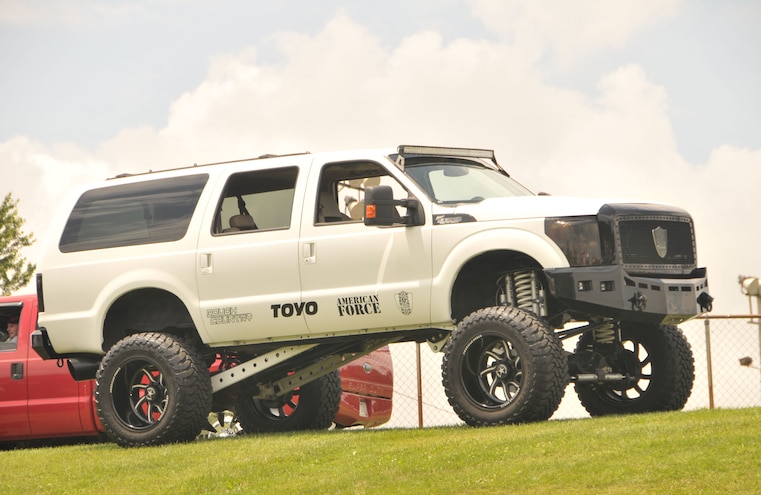 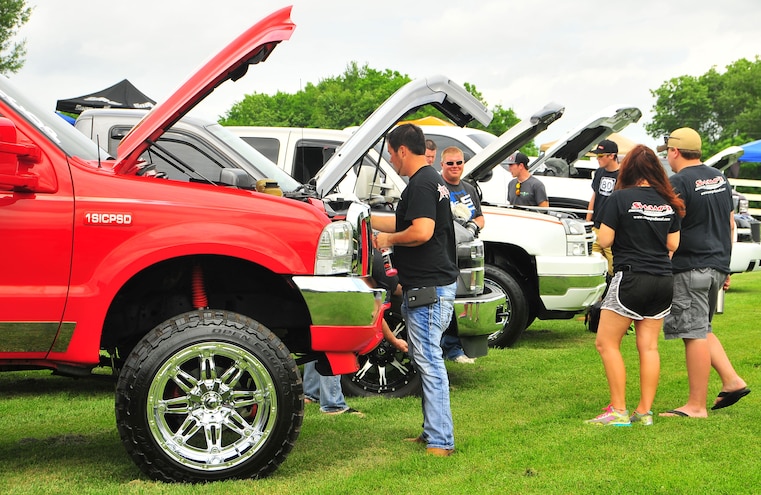 View Photo Gallery | 44 Photos
Photo 5/44   |   One of the great things about a truck show is that you can see what other people are doing and get great ideas for yourself. 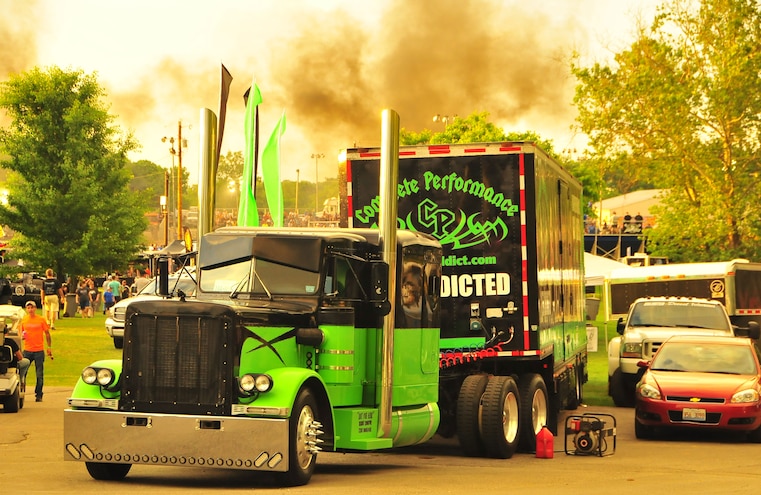 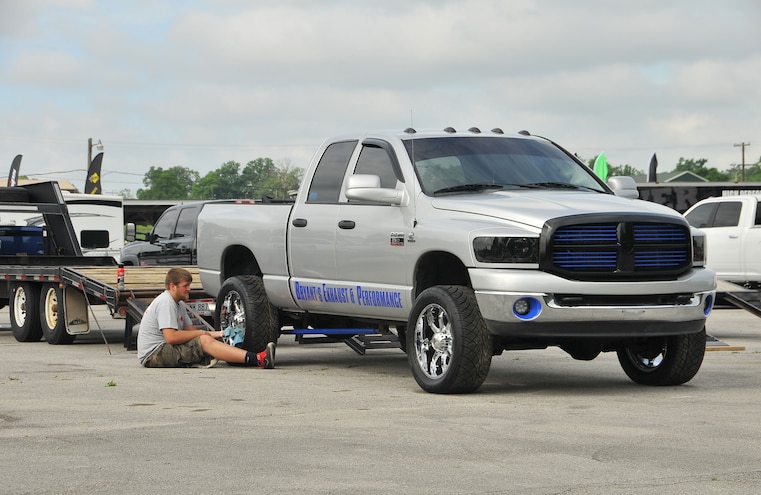 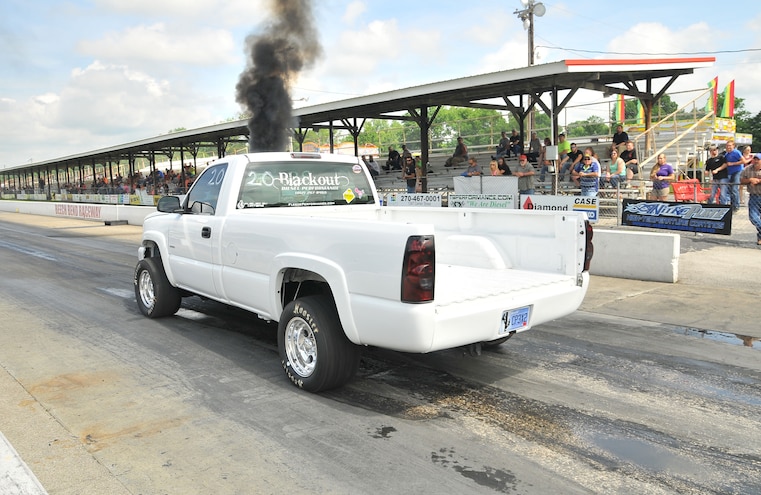