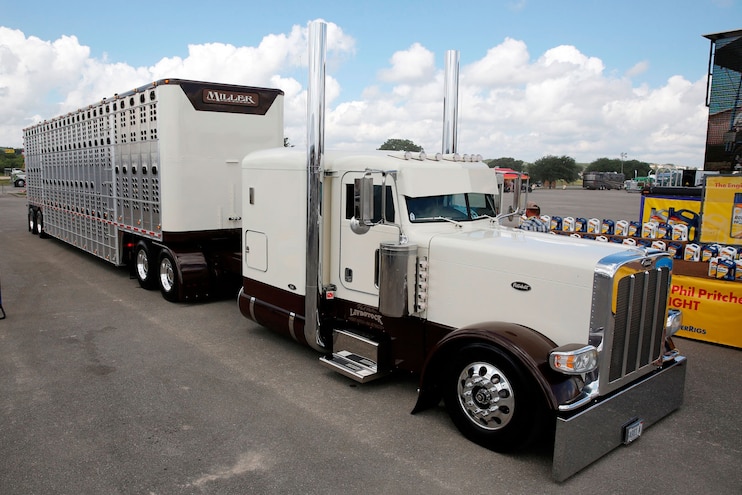 As diesel enthusiasts on the whole, we’re pretty sure some of you, while fully immersed in the Cummins, Duramax, and Ford engines that motivate the pickup trucks we love, might also have more than just passing interest in the larger oil-burners, like those that are the primary focus of Diesel Power’s monthly “Torque” feature.
We’re talking about such engines as Paccar’s MX-13, the Detroit Diesel DD15, the Caterpillar CT660, and other similar powerplants. Basically, the engines that are commonly found under the hoods of long-haul trucks. 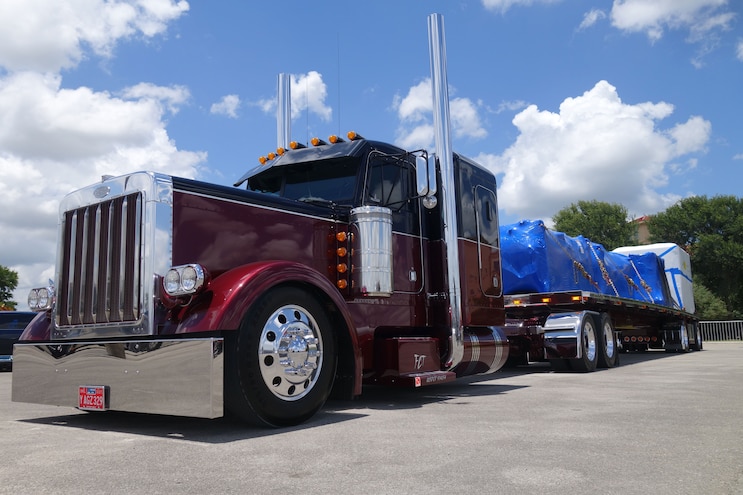 View Photo Gallery | 60 Photos
Photo 2/60   |   Super Rigs Low Peterbilt Front
While Diesel Power doesn’t usually give much shine to those Kenworths, Freightliners, Peterbilts, and other heavy-duty rigs, we realize they’re just as relevant to the diesel scene as the “consumer” vehicles we feature. And, like street-driven pickups with great paint, nice wheels, and engines putting ridiculous amounts of horsepower and torque on the pavement, there are big trucks that run the highway on a regular basis: working trucks or, in simple enthusiasts’ parlance, “daily drivers,” that you would never believe have millions of miles on their odometers.
We attend several dyno and racing events that include show-’n’-shine displays for awesome pickup trucks, but the Shell Rotella SuperRigs show is the ultimate beauty pageant for the big boys. The event, held June 11 to June 13, 2015 at Retama Park in Selma, Texas, just north of San Antonio, gives tractor-trailer drivers and fans an up-close look at some of the most outstanding working trucks on the road, and all of them are owned and operated by independent truckers from across the United States and Canada. 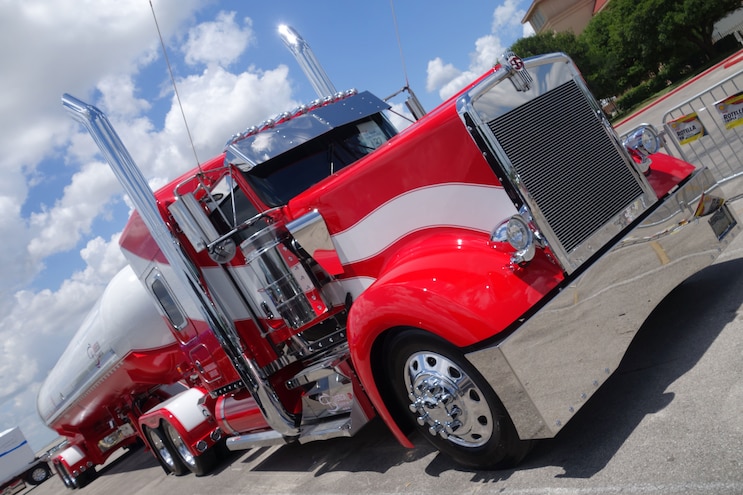 View Photo Gallery | 60 Photos
Photo 3/60   |   Super Rigs Red Kenworth Front
And, in addition to having the opportunity to strut their stuff on what has to be the grandest scale ever for big rig drivers, they are also competing for a Best of Show top prize of $15,000 from Shell ($10,000) and Mac Trailers ($5,000), and their truck’s inclusion in 2016’s edition of the annual SuperRigs calendar.
To many truckers we spoke with, making it into the calendar means more to them than taking home a cash award. Yes, that seems sort of backward when you consider the revenue drivers actually stand to lose by parking a truck for three days, but that’s how much simply being at SuperRigs means to some men and women of the highway. To us, that deep, sincere pride is one of the main reasons why SuperRigs is such a huge success each year. 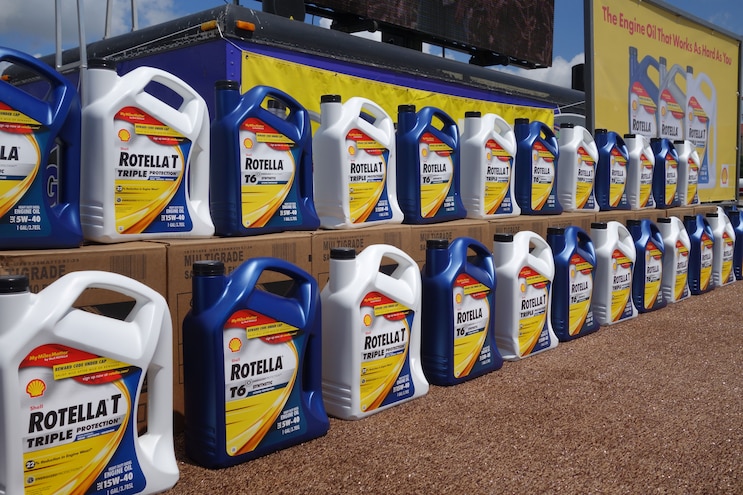 View Photo Gallery | 60 Photos
Photo 4/60   |   As one would expect, there’s plenty of Shell Rotella T heavy-duty, and T6 synthetic (in the blue container) engine oil on hand at the SuperRigs show.
We were given all-access privileges at the 2015 SuperRigs show (the 33rd edition of the annual spectacle) and got to experience firsthand the high levels of quality, detail, and pure, unadulterated pride that owner-operators invest in their diesel-powered vehicles.
While congratulations for earning Best of Show and People’s Choice honors go to Kiegan Nelson of Richfield, Wisconsin, for his fantastic ’85 Peterbilt 359 and ’14 Mac trailer, props also go to all the professional drivers and their awesome work trucks for giving us a great look at another dimension of diesel performance. 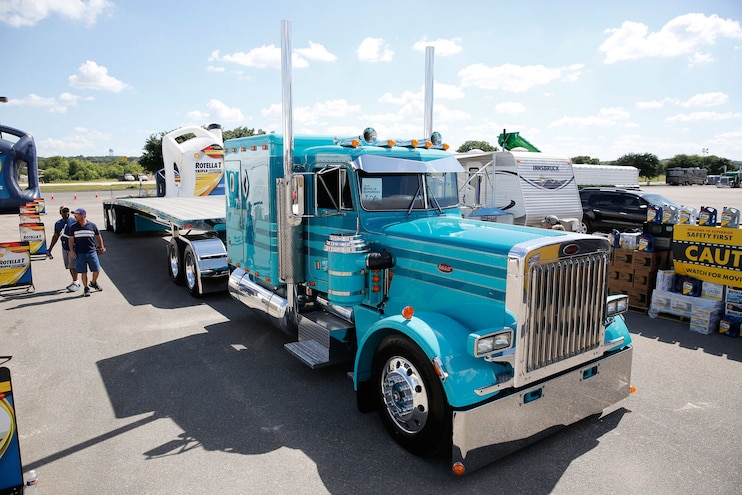 View Photo Gallery | 60 Photos
Photo 5/60   |   Best Of Show Winning Truck Kiegan Nelson Front
The best of the best! Not only was Kiegan Nelson’s gorgeous ’85 Peterbilt 359 and Mac trailer combination deemed Best of Show at the 2015 Shell Rotella SuperRigs beauty pageant, the rig also earned top honors in the Peoples’ Choice category (voted on by fellow SuperRigs competitors and show attendees). In addition to some very classy trophy hardware, Kiegan collected more than $15,000 in total prize money, a spot in the 2016 SuperRigs calendar, Shell My Miles Matter points, and a case of Rotella heavy-duty engine oil. That’s quite a haul (pun certainly intended) for Kiegan to take back to his Richfield, Wisconsin, home. 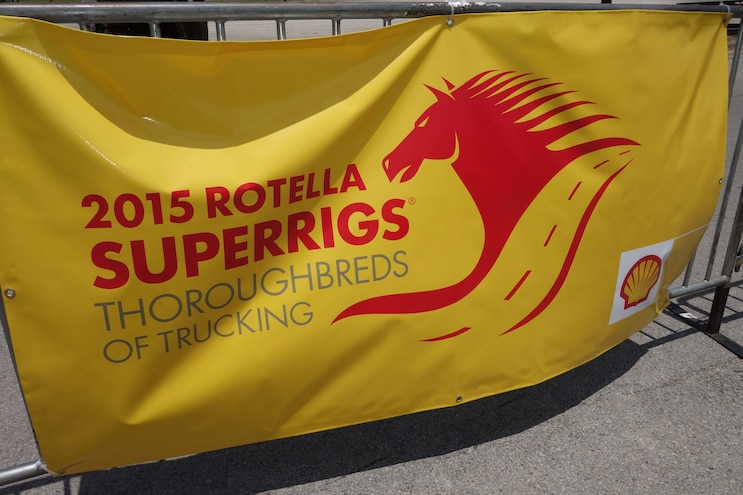 View Photo Gallery | 60 Photos
Photo 9/60   |   Super Rigs Sign
With the 2015 Shell Rotella SuperRigs Show being held in their home state, the Mendez brothers (Roland and Raul Jr.) of Texas Chrome Shop rolled out their arsenal of wicked, custom big rigs, headlined by Project One, an absolutely stunning ’98 Peterbilt 379 and ultra-custom trailer setup that’s owned by Triple R Diesel. The oval-shaped fuel tanks on this thing are sick!
After spying editor KJ Jones wearing his signature Diesel Power bucket hat, this Peterbilt’s unidentified owner-operator proudly announced that the engine in his rig makes 900 dyno-verified horsepower, which lets the Pete drag 130,000 pounds up steep grades with ease.
The Shell Rotella SuperRigs inspection and judging is very stringent, with drivers’ logs and trucks’ service records verified to ensure they really are working machines that run the road and are not purpose-built show queens with engines that don’t even have 100 miles on them—let alone nearly 1 million.

View Photo Gallery | 60 Photos
Photo 19/60   |   Phil Miller
Phil Miller’s ’10 Peterbilt 389 is truly a sight to behold, and it’s almost impossible to fathom that this beautiful cream-and-fudge-brown tractor-trailer combination drags livestock to and fro. Phil’s rig earned much-deserved acknowledgement as the SuperRigs first runner-up for the Best Appearing award, and the Pete’s 700 hp, twin-turbocharged Caterpillar C15 engine (that’s painted to match the truck) garnered “Best” honors in the powerplant category. We can only wish our diesel pickups could pull off the 8-inch-exhaust look as well as Phil’s Peterbilt can. 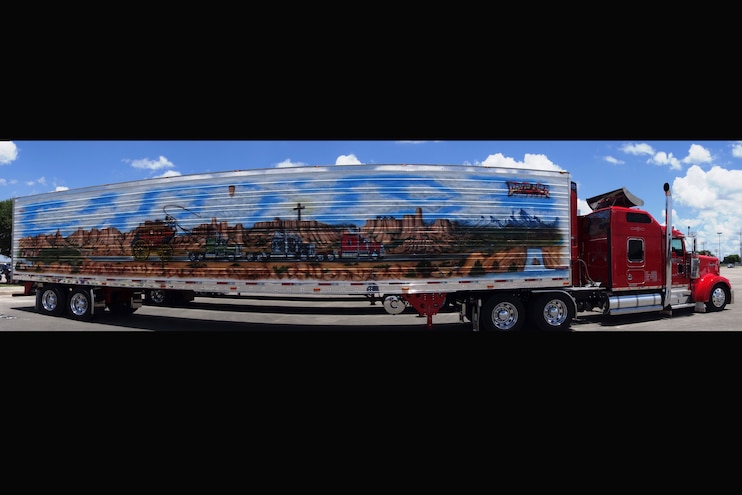 View Photo Gallery | 60 Photos
Photo 35/60   |   We totally dig the mural work on Dustin Pope’s trailer (and his ’03 Kenworth W900L tractor). The Smokey and the Bandit-esque custom artwork on the box was recognized as SuperRigs’ Best Theme winner, and the combination also finished in Second Place in the Tractor/Trailer Division. 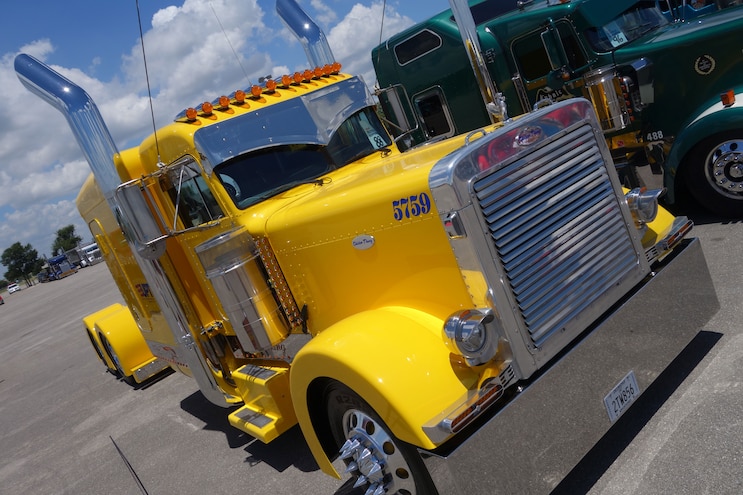 View Photo Gallery | 60 Photos
Photo 36/60   |   Super Rigs Chicken Thang Front
Ray French Jr. calls his bright yellow and very custom ’02 Peterbilt the “Chicken Thang.” While we only got to see the Thang during the daytime, the truck is fitted with a complete array of mind-blowing, color-matching illumination that helped it win the Best Lights prize at the 2015 SuperRigs show.
This is the ’84 Peterbilt 359 of the late Isaias (Isaac) Trevino "Moondoggie" Flores. Isaac was tragically murdered in April 2015, and in memoriam and to celebrate a life that was dedicated to trucking, Adrian Rocamontes of ACW Specialties and Custom Trucks prepared the rig to serve as the vehicle that transported Moondoggie’s casket to his burial site. This “final run” would be the last load the truck would ever haul. The rig literally is a time capsule, with Moondoggie’s pack of smokes still tucked against the window, where they were always within easy reach as he rolled down the highway. 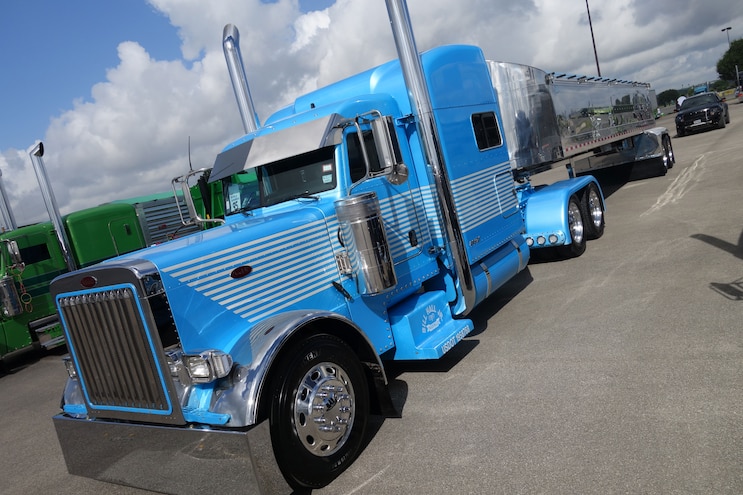 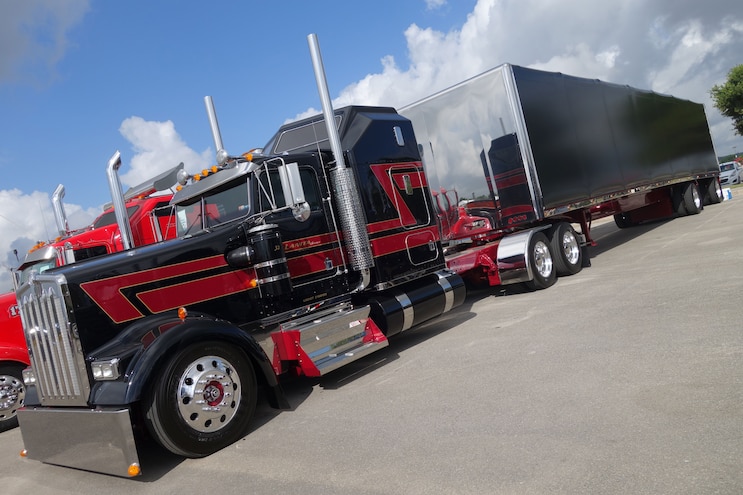