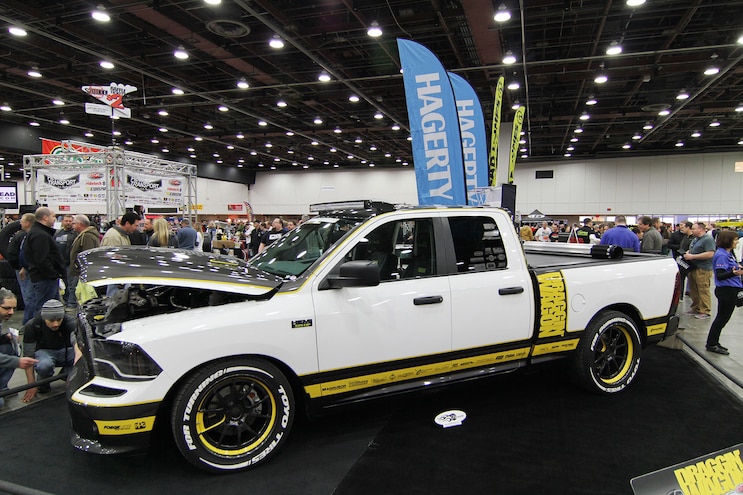 For nearly 65 years, the Detroit Autorama has been the enthusiasts’ oasis amid the snow of Motown’s notorious winters. It’s the opportunity to brush the snow off your coat, knock the slush off your boots and soak in the warmth of hundreds of hot rods, street machines and custom trucks.
It started in 1953 and was hosted by Michigan Hot Rod Association (MHRA) – and it was an immediate success. The group handed the show’s reigns to Don Ridler, a local promoter, and the Autorama grew quickly over the next few years, with proceeds that helped fund MHRA’s quest to build Michigan’s first official, sanctioned drag strip.
MHRA board member Bob Larivee was tasked with managing the strip in New Baltimore, northeast of Detroit, which was eventually named Motor City Dragway. It opened in 1957 and closed in 1978, as suburban sprawl enveloped the surrounding area. In 1959, Larivee founded Promotions, Inc. to promote car shows, which lead to the formation of the International Show Car Association (ISCA) by 1963. 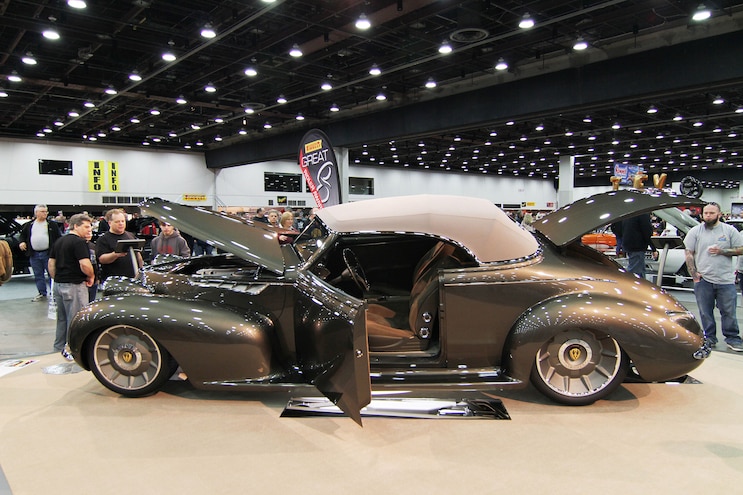 View Photo Gallery | 26 Photos
Photo 2/26   |   002 Detroit Autorama 1963 Olds Series 60 Bill Thomas Ridler Winner
Bill Thomas brought his stunning and controversial 1939 Olds Series 60 convertible all the way from Texas to claim the coveted Ridler award at the 2016 Detroit Autorama. It was stunning because the workmanship by Customs and Hot Rods of Andice was impeccable. Power comes from a Mondello-built, EFI-fed Olds 455 punched out to 470 cubic inches and producing 650 hp. The controversy comes from the fact most historical references say Olds never built this car, but Thomas insists it was a legit 60-model convertible from the moment it left the factory. Regardless, it was a deserving Ridler winner.
After Don Ridler’s death, a memorial award was created in his honor and the first one was bestowed in 1964 to Al Bergler’s AA/C race car, dubbed “More Aggravation.” In the years since, the Ridler award has become one of the hot rodding world’s most prestigious trophies, ranking with the Grand National Roadster Show’s America’s Most Beautiful Roadster award. It is awarded only to vehicles that debut at the Detroit Autorama, which guarantees a fresh show every year, with the latest creations from industry legends such as Chip Foose and the Ring Brothers, as well as up-and-coming builders looking to make their mark.
Finalists for the award are known as the Great 8 each year and for 2016 they included Billy Thomas’ stretched 1939 Olds convertible, Joe Horish’s phantom 1961 Chevy coupe wagon, Michael and Patricia Markins’ 1938 Graham, Richard Broyles’ thoroughly customized 1941 Ford pickup, Mark Goodens’ 1952 Mercedes-Benz street rod, Kenny Welch’s 1937 Ford, Greg Malvaso’s 1940 Willys and – all the way from Australia – Chris and Colleen Bitmead’s 1976 Ford Falcon.
While the Ridler contenders represent the upper echelon of project car spending, typically costing hundreds of thousands of dollars, the rest of vehicles on display convey decidedly more down-to-earth approaches to personalization and performance. It is the quintessential blue-collar city, after all, and that’s reflected in most of the muscle cars, street rods and the strong contingent of trucks. 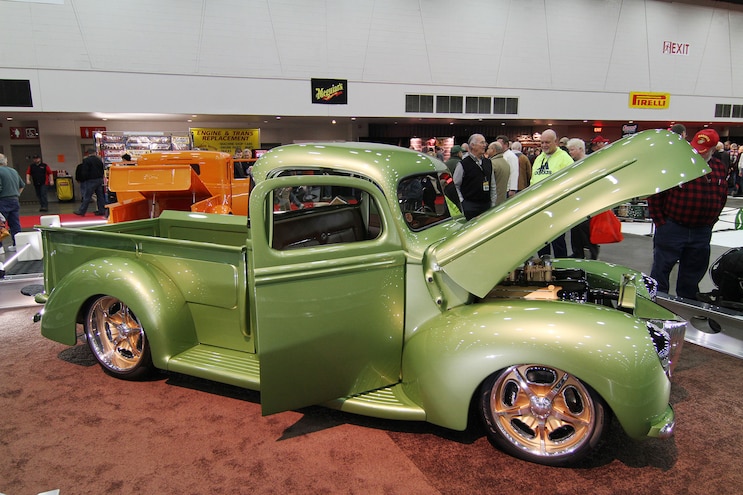 View Photo Gallery | 26 Photos
Photo 3/26   |   003 Detroit Autorama 1940 Ford F1 Legens Hot Rod Shop
Legens Hot Rod Shop did for owner Robert Anderson what other builders said couldn’t be done – cram a late-model Ford Coyote engine in his 1940 pickup. They succeeded, helping Anderson and the truck capture the Goodguys 2015 Truck of the Year trophy. Major body mods include a wraparound “big window” rear glass conversion, 1.5-inch chopped top, pie-cut hood and a one-off grille.
Detroit is definitely a truck town, with vintage iron prized because rust consumed almost all the originals decades ago. Consequently, great pains are taken to restore them. And with the Motor City being as blue collar as it gets, it’s not surprising to find plenty of down-and-dirty modifieds among the rows of gleaming show vehicles. Horsepower is a highly respected measuring stick around here and many a builder will sacrifice aesthetics for a few more cubic inches.
The Detroit Autorama is definitely a bucket list event – and for those who slog through dark, cold and slushy winters, it’s a warm respite providing a glimpse of the warm-weather car season that’s not too far away. Here’s a look at 25 of the best vehicles from this year’s show. 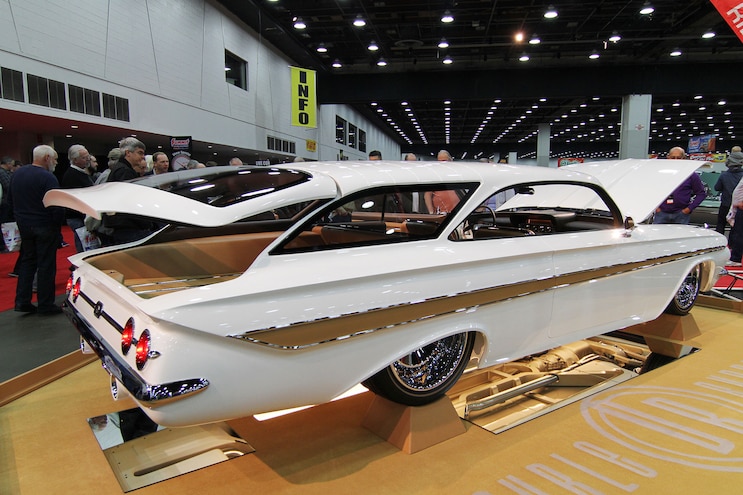 View Photo Gallery | 26 Photos
Photo 4/26   |   004 Detroit Autorama 1961 Chevy Impalal Wagon Joe Horisk
Another Ridler contender – one of the “Great 8” – was Joe Horisk’s radial 1961 Chevy Impala. It was born a two-door hardtop and transformed into a Nomad-inspired sport wagon, appropriately dubbed Double Bubble. The extended roofline, C-pillar and tailgate were made from the roof and rear glass from another ’61 “bubbletop” Chevy, hence the car’s name. Additionally, the roof was chopped 3 inches and the windshield laid back 2 inches. Amazing. 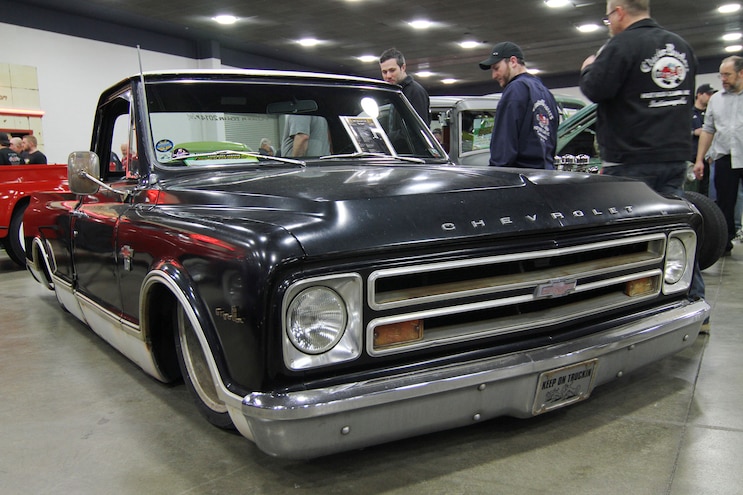 View Photo Gallery | 26 Photos
Photo 5/26   |   005 Detroit Autorama 1967 Chevy C10 Gerry Kerna
In recent years, the “basement” of Cobo Center has been home to what’s been called Autorama Extreme. It’s a showcase of more traditionally styled and elemental hot rods and customs and Gerry Kerna’s seriously slammed ’67 Chevy C-10 exemplifies the ethos. It was built by RPM Hot Rods, in Pennsylvania, so don’t let the appearance mislead you – it’s seriously worked over truck, with a modified frame and LS engine conversion. View Photo Gallery | 26 Photos
Photo 6/26   |   006 Detroit Autorama 1940 Willys Coupe Greg Malvaso
Greg Malvaso’s 1940 Willys coupe is a marvelously modern tribute to 1960s’ gassers and was a Great 8 car at the show. Its 8-71-blown and Hilborn-injected Dart 540 big block cranks out 850 horses. Malvaso had assistance completing the car by TriWorks Hot Rods, in Nashville, Tenn. One the more integrated details is the blower and injector scoop: the blower is painted to match the wheels, while the scoop matches the car’s Torch Red body color. The interior features the Lightning Rod used in the ’83/84 Hurst Olds. 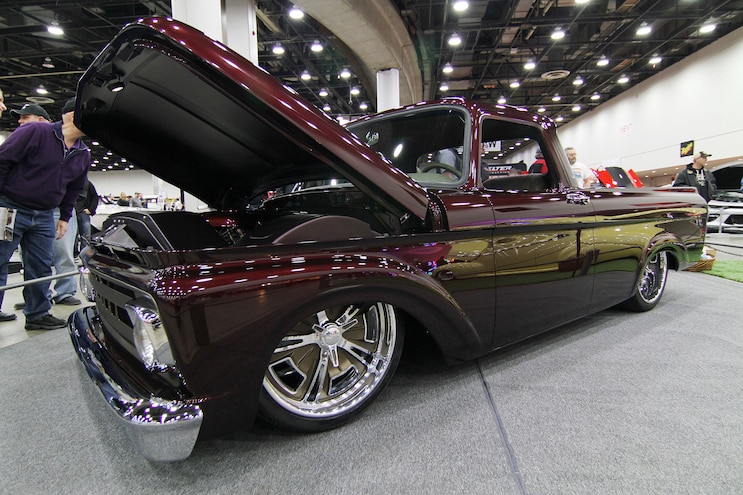 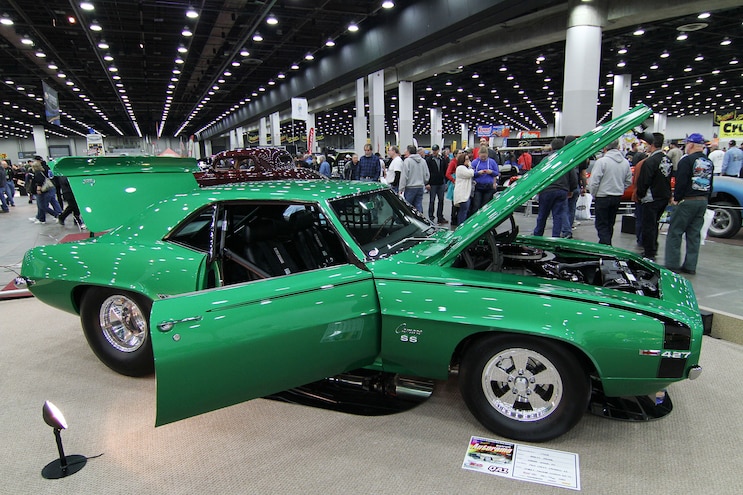 View Photo Gallery | 26 Photos
Photo 8/26   |   008 Detroit Autorama 1969 Camaro Scott Payne Supercar Specialties
Builder Scott Tiemann and his Supercar Specialties shop is generally known for concours-winning muscle car restorations, but Scott and Angie Payne’s ’69 Camaro represents a fun and creative deviation from the norm. Originally a 396/4-speed car, its original drivetrain evaporated decades ago. In its place and driving the narrowed rear axle is a 625-hp 427 big block backed by a prepped Turbo 400. The 4-link suspension locates the rear axle and there are disc brakes all around. The Rally Green paint is a refreshing change from the typical red or Hugger Orange, too. 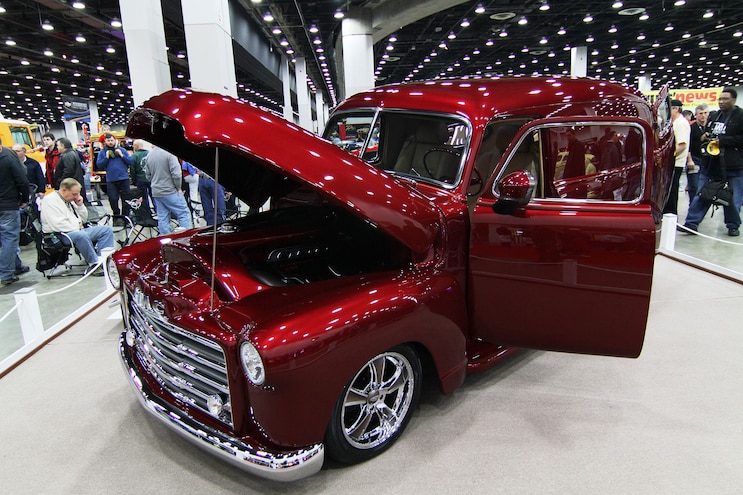 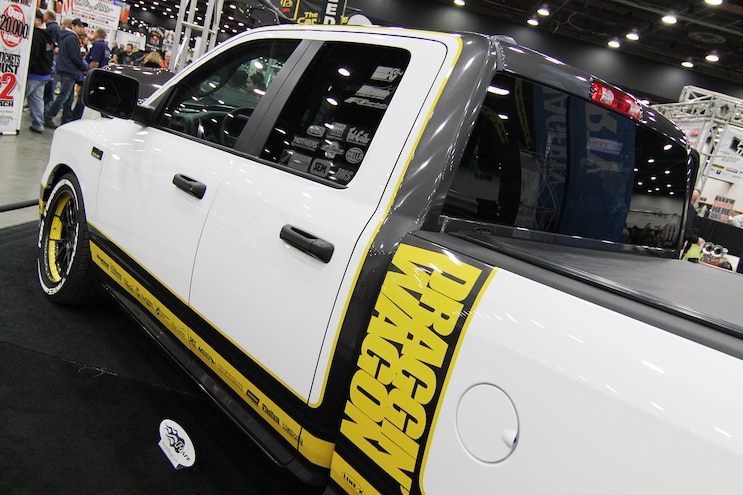 View Photo Gallery | 26 Photos
Photo 10/26   |   010 Detroit Autorama Murray Pfaff 2015 Ram 1500 Draggin Wagon
Murray Pfaff’s “Draggin’ Wagon” Ram 1500 Express pickup picked up a first-place trophy for his truck class. It’s been lowered 4 inches and a Magnuson blower system helps the 5.7-liter Hemi engine push more than 500 horsepower at the flywheel. Pfaff is a designer and it shows in the inspired graphics. We’re working on a feature story on this righteous Ram. 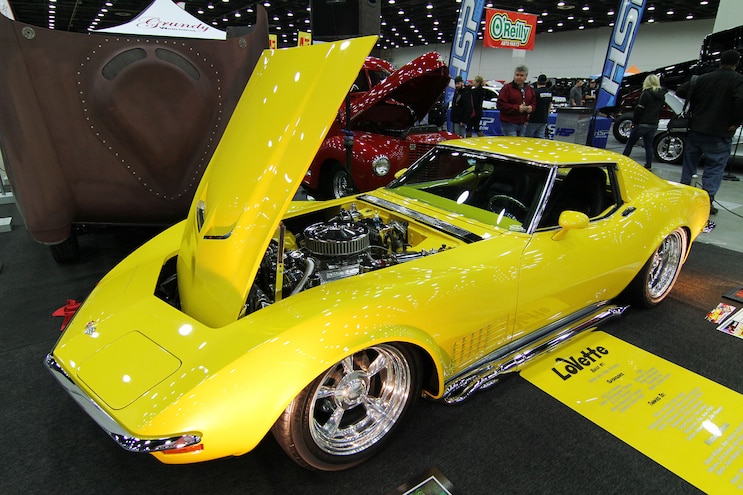 View Photo Gallery | 26 Photos
Photo 11/26   |   011 Detroit Autorama 1972 Corvette Steve Grybel
Steve Grybel’s slammed, chrome yellow C3 was one of our favorites. The small block-powered coupe has been completely restored and customized from stem to stern, with more details than we have room to print here. Love the side pipes, too. 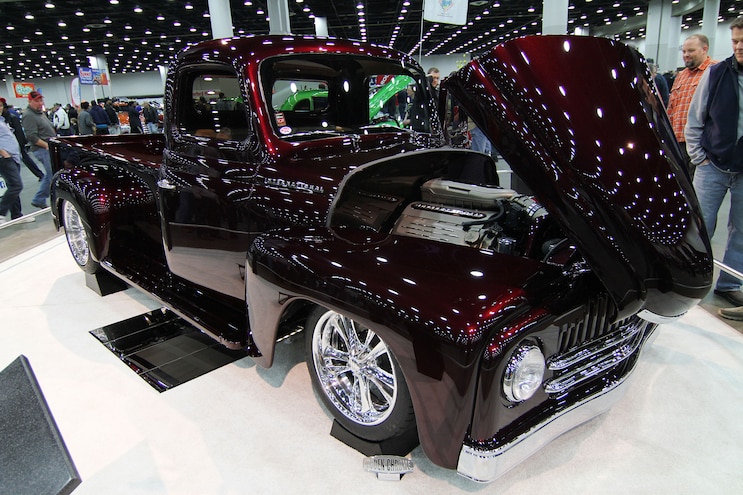 View Photo Gallery | 26 Photos
Photo 13/26   |   013 Detroit Autorama 1970 Olds 442 James Kryta
Restored muscle cars make up only a fraction of the vehicles at the Autorama, but this Olds vied for all the attention of the high-profile customers. It belongs to James Kryta, the co-founder of restoration parts manufacturer Inline Tube, and he has a thing for Lansing-born muscle cars. His Sebring Yellow 1970 442 W-30 convertible is a rare one, too – one of only 96 built.

View Photo Gallery | 26 Photos
Photo 14/26   |   014 Detroit Autorama 1927 Ford Model T Mike Borema Gas Axe Garage
“Hip High” is a ’27 T that has had the whole customizing kitchen sink thrown at it. The frame has been chopped and Z’d, while the body has been channeled over it. The engine is a centrifugally blown, “full house” Flathead. Michigan’s Gas Axe Garage built the car and it’s owned by Mike Boerema. 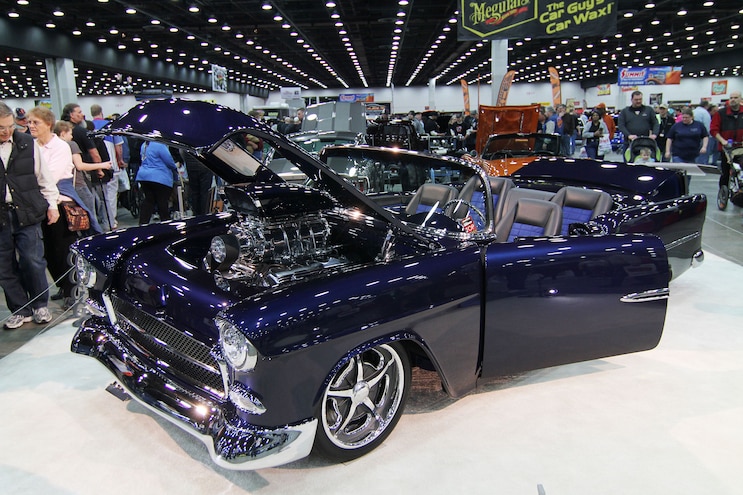 View Photo Gallery | 26 Photos
Photo 15/26   |   015 Detroit Autorama 1955 Chevy Flip Cooper G3 Rods
Here’s a combination you didn’t expect to see: a 1955 Chevy with a blown Ford SOHC engine. The car was born a hardtop and converted to roadster with four bucket seats. The thoroughly reformed body rests on an Art Morrison chassis fitted with C6 Corvette front and rear suspensions – and the body is channeled over the frame. The car belongs to South Dakota’s Flip Cooper and it was built by G3 Rods.

View Photo Gallery | 26 Photos
Photo 16/26   |   016 Detroit Autorama 1970 Dodge Ramp Truck
Who doesn’t like vintage haulers? Jon Clark parked this ’70 Dodge ramp truck in the Extreme basement, loaded with the “Ford Freeway Flyer” Econoline cab-over pickup. That’s about all the info we got on the hauler/haulee combination, but that’s fine. It’s all we need to know, other than asking whether the Dodge is for sale. 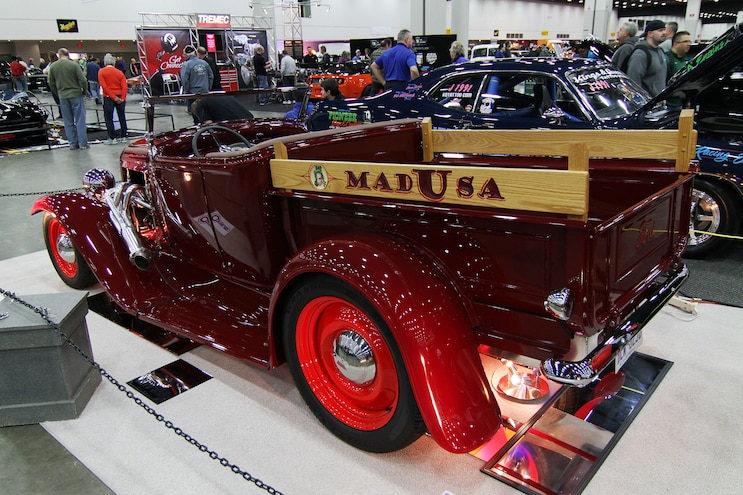 View Photo Gallery | 26 Photos
Photo 17/26   |   017 Detroit Autorama 1931 Ford Roadster Roseville High School
This 1931 Ford roadster pickup is as detailed and well-executed as any high-dollar custom, but it was built by the Roseville High School (near Detroit) auto shop program and even competed at the Grand National Roadster Show a couple of years ago. The small block Chevy-powered street rod demonstrates there’s hope for hot rodding’s future, as contrary to reports, clearly not every young person is car-averse these days. 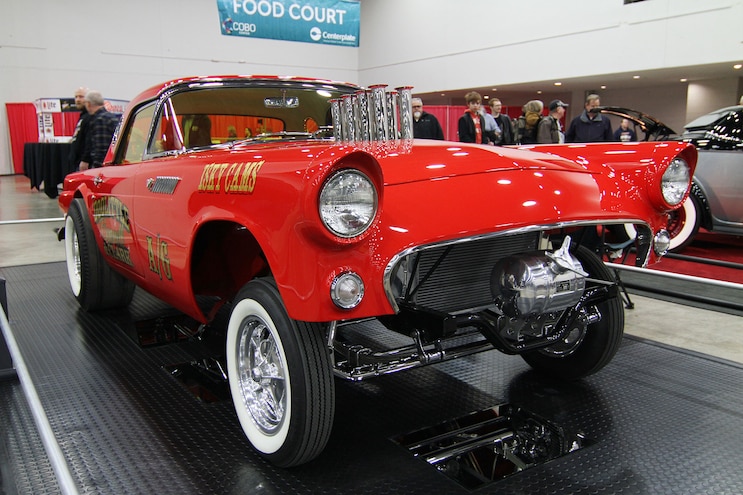 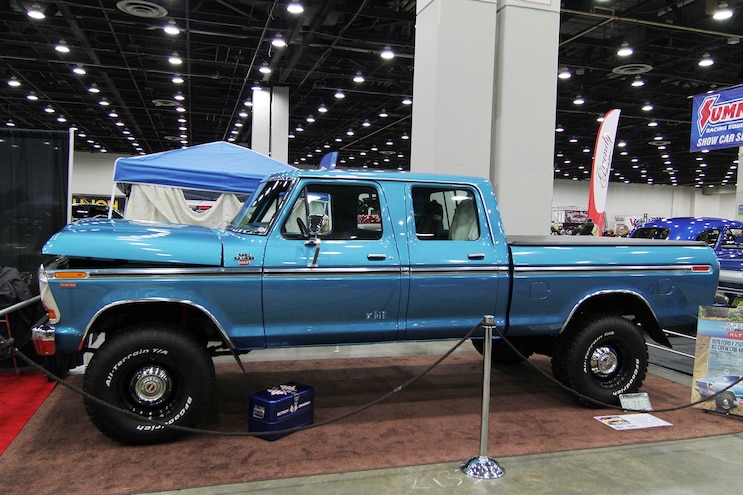 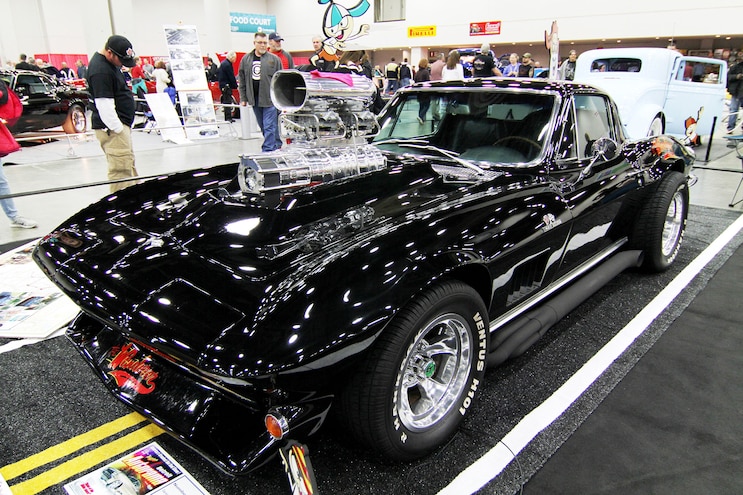 View Photo Gallery | 26 Photos
Photo 21/26   |   021 Detroit Autorama 1967 Corvette Mike Blank
Gary Bach has had an epic experience with this 1967 Corvette since purchasing it in 1978. He and buddy Mike Blank have driven it across the country twice along Route 66, cruising along the backroads of America with a 663-hp blown 427 big block. The old-school Eckler’s body mods have been in place since the late 1970s, too. 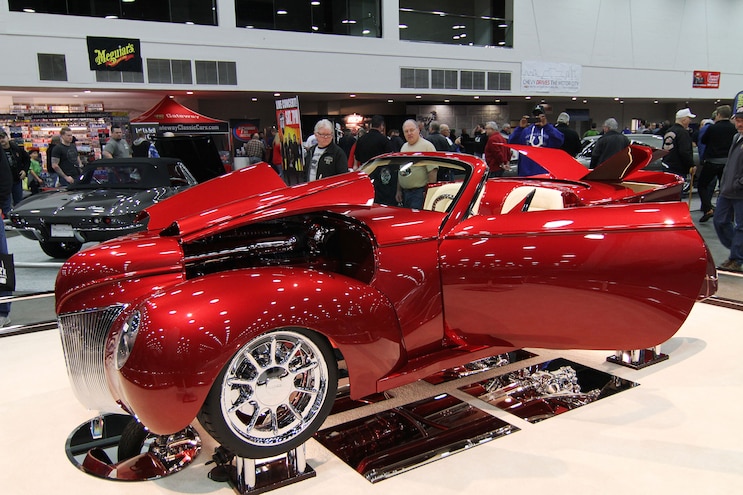 View Photo Gallery | 26 Photos
Photo 22/26   |   022 Detroit Autorama 1941 Ford
Richard Broyles’ custom 1941 Ford truck was a Great 8 Ridler contender and for good reason – every square inch of the sheet metal was reworked to distinguish it, including modern projector-style headlamps in housings evoking the shapes of originals. Under the hood sides is a supercharged Mod engine. 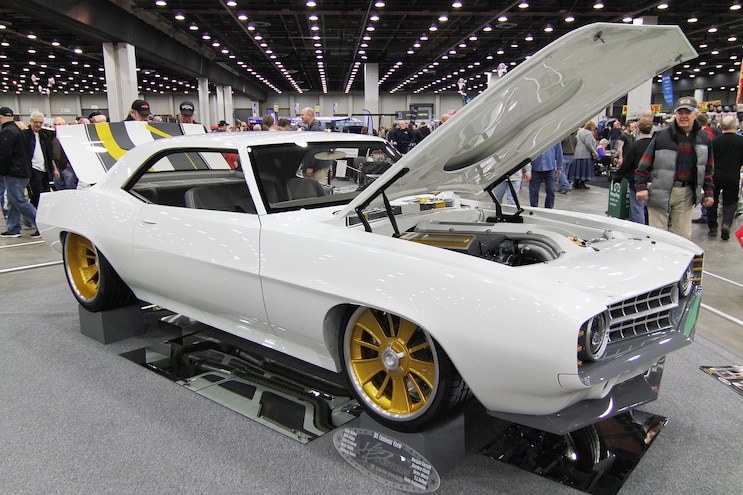 View Photo Gallery | 26 Photos
Photo 23/26   |   023 Detroit Autorama 1969 Chevy Camaro
The details on Alex Short’s ’69 Camaro are almost endless, with highlights including widened rear quarters, a recessed taillight panel with floating taillights, a scratch-built grille and an extended hood that takes the place of the factory header panel between the hood and grille. The engine is a Thomson Automotive-built twin-turbo LSX 427 making more than 1,200 horsepower. And that’s all just scratching the surface on this fantastic F-body. 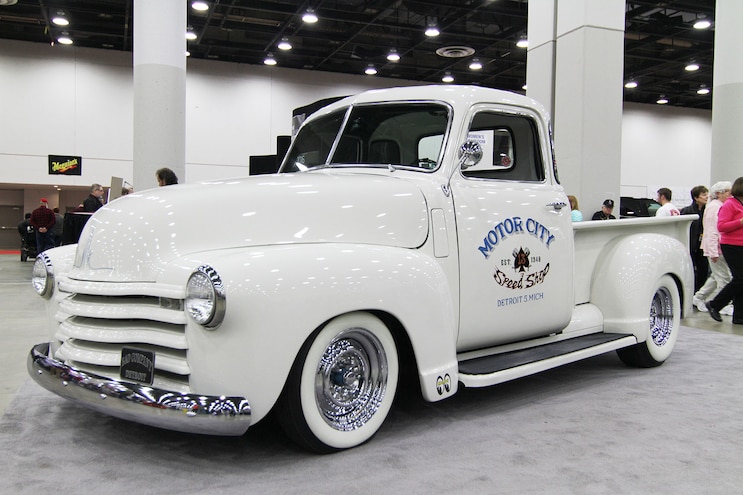 View Photo Gallery | 26 Photos
Photo 24/26   |   024 Detroit Autorama 1948 Chevy Motor City Speed Shop
Details were scant on this ’48 Chevy pickup, but its traditional look and stance were spot on. And you know what? It’s shiny, polished paint and chrome wheels were a nice break from the patina look that’s become ubiquitous with hot rods of this vintage. 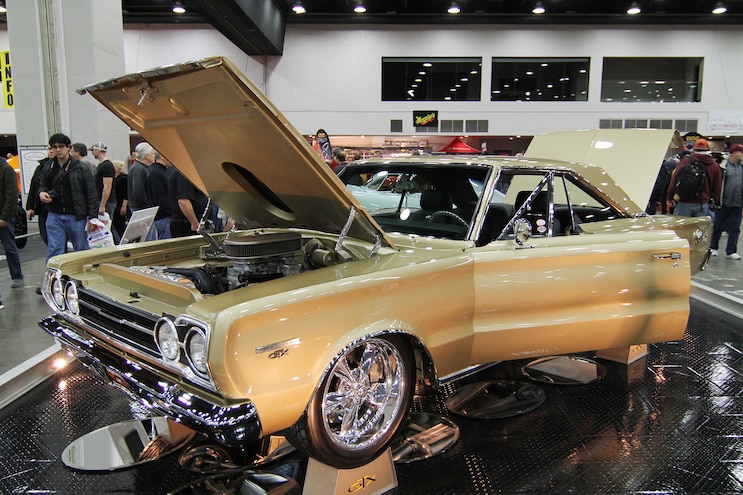 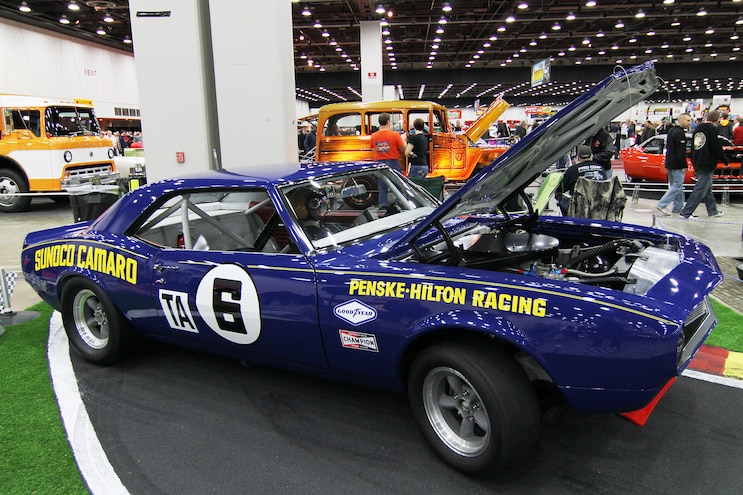 View Photo Gallery | 26 Photos
Photo 26/26   |   026 Detroit Autorama 1968 Chevrolet Camaro Penske Donohue Tribute Adam Moore
Adam Moore set out to build a replica of the Penske-backed Camaro driven by Mark Donohue and did a hell of job – thanks to fabrication direction from Ron Fournier, who worked with Penske all those years ago. It’s a faithful replication and even sports an authentic DZ-code 302 engine. While building the car, Moore discovered he was born on the same day Donohue died in 1975. Spooky.

- OF
By Barry Kluczyk
21 Articles