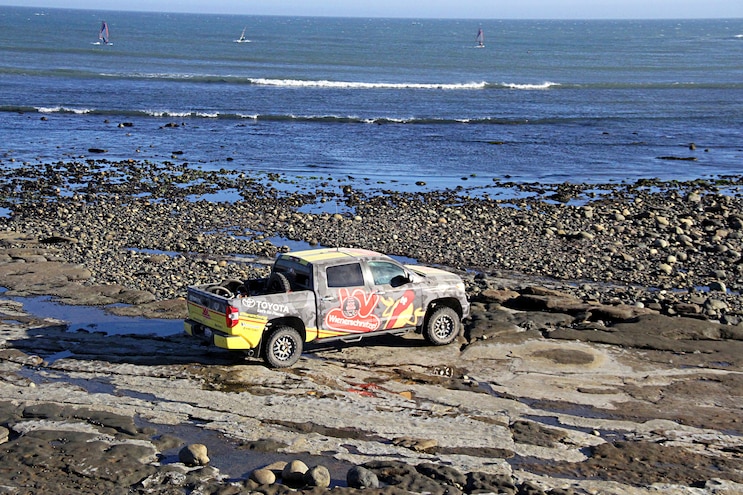 Baja California, Mexico, is a uniquely wonderful place. There are very few places like it left in the world. The remote desolation, untouched beaches, and beautiful old ranches and fishing villages give the impression that time has stood still. So when Toyota of Escondido put together a trip to explore some of the most pristine trails and got veteran desert racer and Baja tour guide extraordinaire Cameron Steele to lead the group, there was no way we could pass on the opportunity to join the fun. 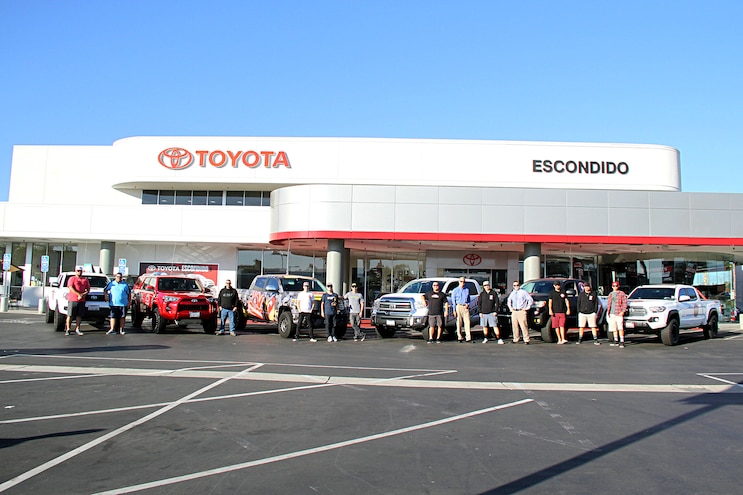 View Photo Gallery | 17 Photos
Photo 2/17   |   Toyota Baja Surf Trip Toyota Of Escondido
The timing of the excursion coincided with September’s full moon cycle, so it was logical to dub the trip “Full Moon Baja.” The adventure began at the Tecate border crossing between the United States and Mexico, which is not far from Toyota of Escondido’s dealership. Joining the group were a pair of brand-new ’17 Tacoma TRD Pros, three Tundras, and a 4Runner TRD Pro. Two of the Tundras were full-luxury Platinum editions, with upgraded shocks and skidplates to handle the rigors of Baja. Even though we were chasing a full moon, Baja Designs lights were also installed for when the trails got dark. 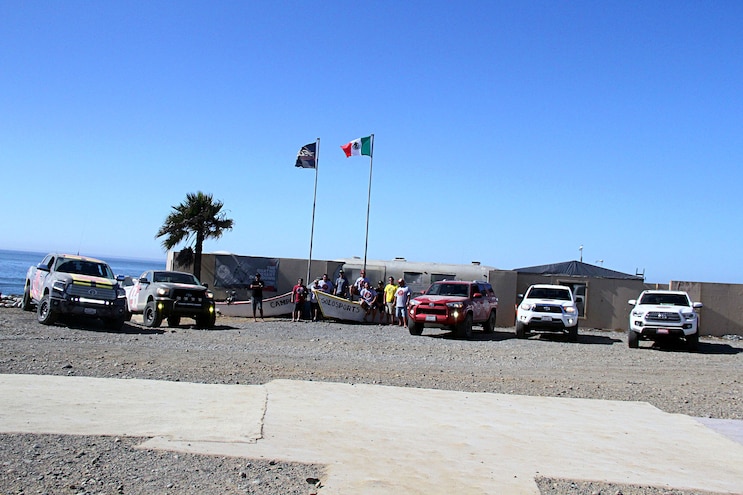 View Photo Gallery | 17 Photos
Photo 3/17   |   Toyota Baja Surf Trip Solosports
After crossing into Baja, the first trail the group hit was the Compadre Trail. The dirt roads that comprise the Compadre Trail wind through tree lined ranches and arroyos. Steele’s chase crew provided a fully catered lunch for the group deep in the desert. After a few more hours of driving the first day in the dirt ended at the famous Mike’s Sky Ranch. Mike’s is a must see for off-road enthusiasts. Nestled far from any form of civilization, the stargazing at Mike’s is among the best in the world. And the pool and bar weren’t bad either. 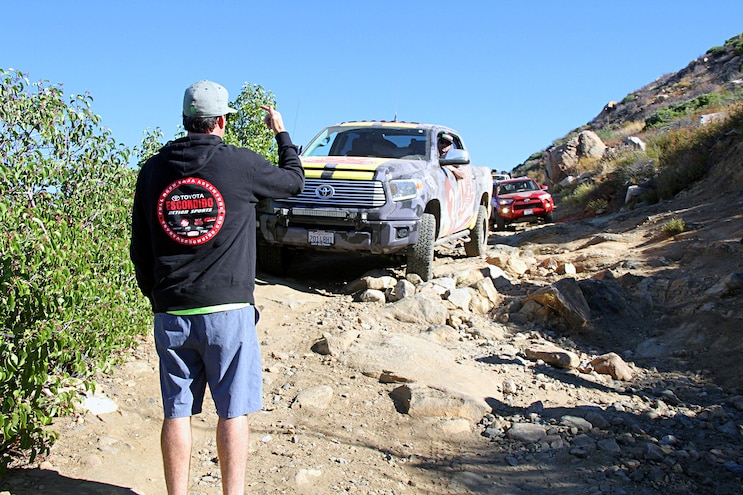 View Photo Gallery | 17 Photos
Photo 4/17   |   Toyota Baja Surf Trip Cameron Steele Assistance
The first day was to be an introduction to Baja. Day Two, however, got far more technical. On this day, the group covered hundreds of miles of the most rugged and challenging Baja terrain. Leaving Mike’s, the group headed for the coast while following different sections of previous SCORE Baja 1000 racecourses. All of the vehicles needed four-wheel drive to crawl over rocks, and Steele was out spotting to ensure everyone made it through the obstacles unharmed. 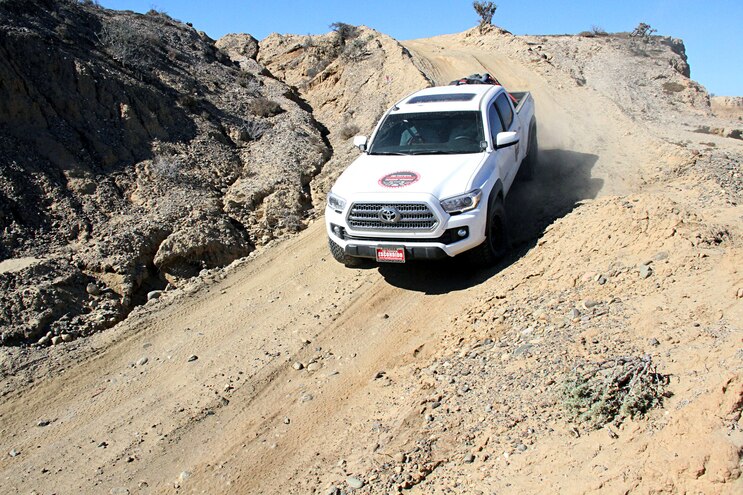 View Photo Gallery | 17 Photos
Photo 5/17   |   Toyota Baja Surf Trip Tacoma Rolling Hills
Lunch the second day was a quick stop for tacos at Mama Espinoza’s in the town of El Rosario. Mama Espinoza’s has been a favorite stop of racers and chase crews alike for the past half-decade. With full bellies, it was time to hit the coast for a bit of surfing, because the only thing better in Baja than the off-roading is the surfing. Accommodations were at a remote surf camp called Solo Sports in Punta San Carlos. Like Mike’s, Solo Sports is an excellent place to go fully off the grid if you ever need to unwind and let loose. They do have a computer in a small office to check email or update Facebook, but with amazing Baja coast right out the door, who would want to be tied to a computer anyway? 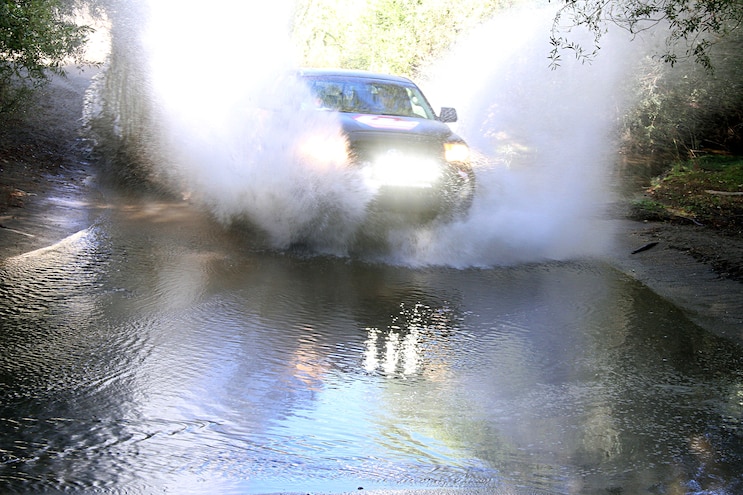 View Photo Gallery | 17 Photos
Photo 6/17   |   Toyota Baja Surf Trip Toyota Tundra Splash
Leaving Solo Sports the next morning gave the opportunity to drive on the beach. Several guys wasted no time in spinning donuts and staging drag races. The trip back north ran along the latest course of the NORRA Mexican 1000 and gave spectacular views of 100-foot tall cactuses. Legend has it that these cactus provided inspiration for Theodor Seuss Geisel’s popular line of Dr. Seuss children’s books. Cruising along at speeds up to 90 mph, this day’s trails really got the adrenaline pumping. After a quick group photo at the famous shipwreck site outside of Ensenada, we headed to Horsepower Ranch for the final night. 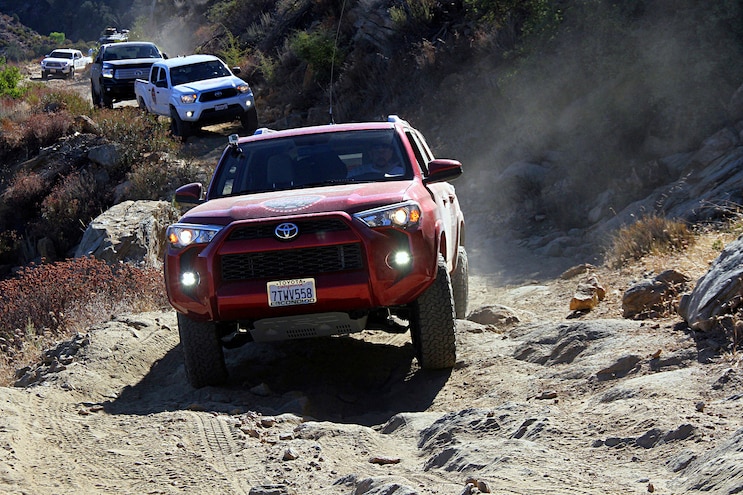 View Photo Gallery | 17 Photos
Photo 7/17   |   Toyota Baja Surf Trip Fourrunner Rocks
As the morning sun rose over Horsepower Ranch, the breakfast chatter was bittersweet. In just a few hours, we would all be back in the States and back to reality. While the trip was drawing to a close, the memories of running our small group of Toyotas across the majestic Baja Peninsula would last with all of us for a lifetime.