The Big Rigs of SEMA 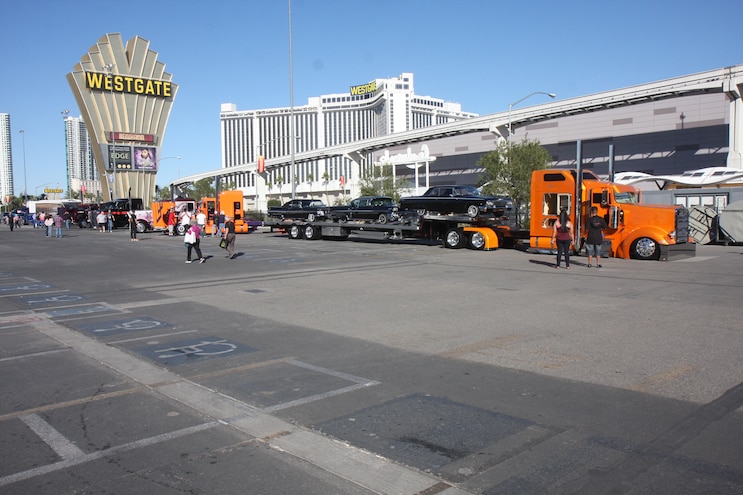 Held in conjunction with the 2016 SEMA Show, the American Truck Show Circuit (ATSC) trotted out several Class 8 trucks that sported all the style of the other vehicles at the trade show—if not more! Setting up shop just across from the Las Vegas Convention Center, ATSC’s pop-up venue showcased what some of the nation’s biggest work vehicles are capable of from a style and customization perspective, and we sure liked what we saw.
With such big canvases to work with, those who customize semitrucks have myriad options available, ranging from hot rod–inspired paintjobs to wild, airbrushed scenery and nose art. Chrome, massive sound systems, and matching trailers made each truck at the ATSC venue unique and special. 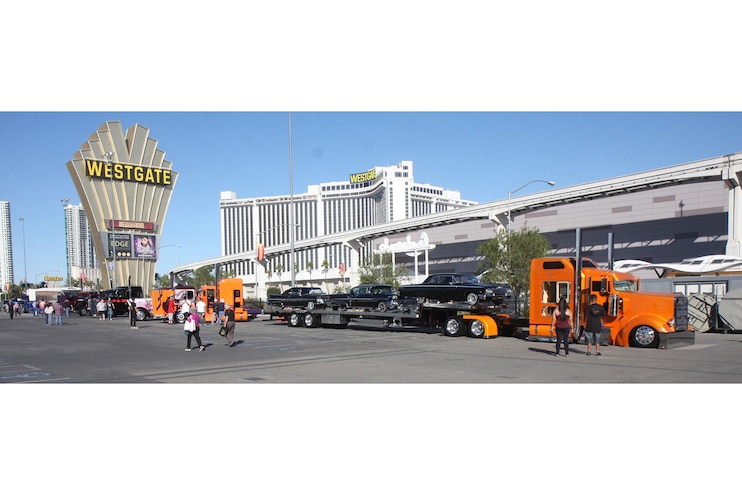 View Photo Gallery | 15 Photos
Photo 2/15   |   Held across the street from the famous Westgate Las Vegas Resort & Casino, the American Truck Show Circuit pop-up had several very cool big rigs on display. The 2017 show circuit includes stops in Wildwood, Florida; Bristol, Tennessee; Rantoul, Illinois; Ventura, California; and Las Vegas, Nevada. The event’s mission statement reads: “A modern truck show and event circuit dedicated to the growth and development of the owner-operator show truck and the heavy-duty truck aftermarket. With the goal of exposing more individuals to the unique lifestyle of the American owner-operator, their dedication to their equipment, and dedication to showing it off — the American Truck Show Circuit exists to create a fair, unbiased, and exciting platform to display their hard work.” (ATSC.world). 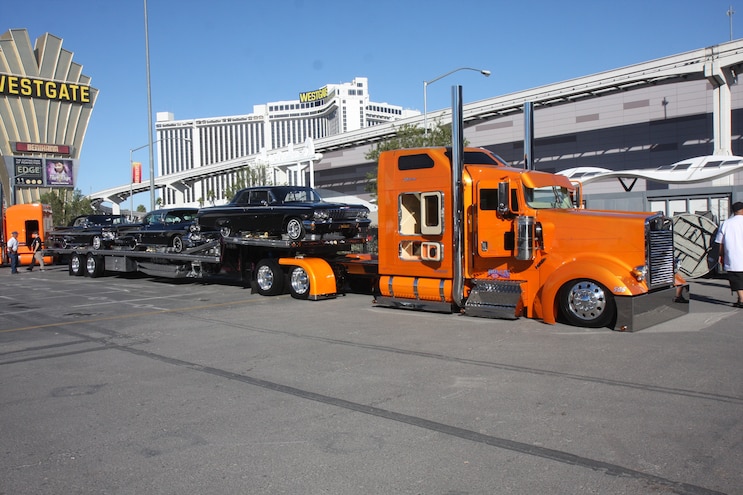 View Photo Gallery | 15 Photos
Photo 3/15   |   With front-row billing, the first truck most people saw upon entering the show was this Kenworth owned by Rollin’ R Enterprises. Hitched to a slick car hauler loaded with three black Chevrolet Impalas, this truck was a total crowd magnet, inviting people interested in the cars, the truck, or both. 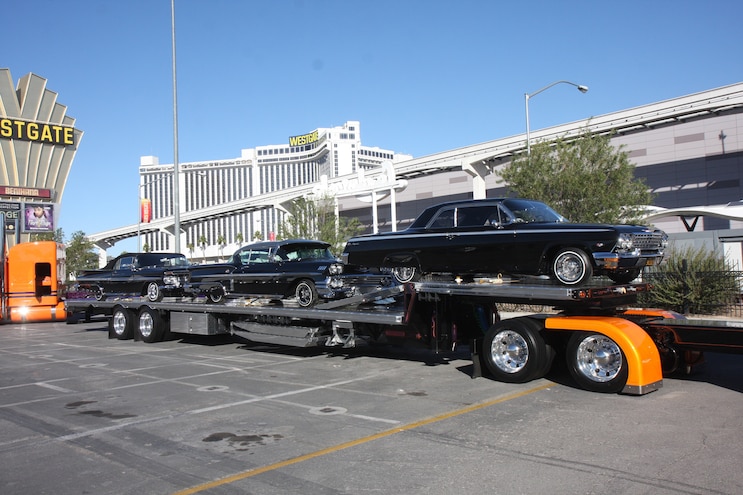 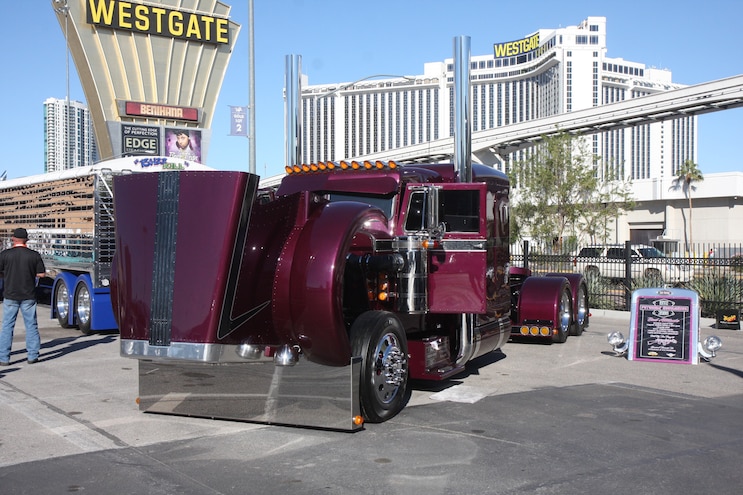 View Photo Gallery | 15 Photos
Photo 5/15   |   This ’72 Peterbilt 358A named Bad Attitude is powered by a Cat 3406 backed up by a 13-speed transmission and four-speed auxiliary. While it’s not the flashiest truck in the world, it stands out thanks to its clean, simple build, highlighted by the eggplant paint and slick black scallops. 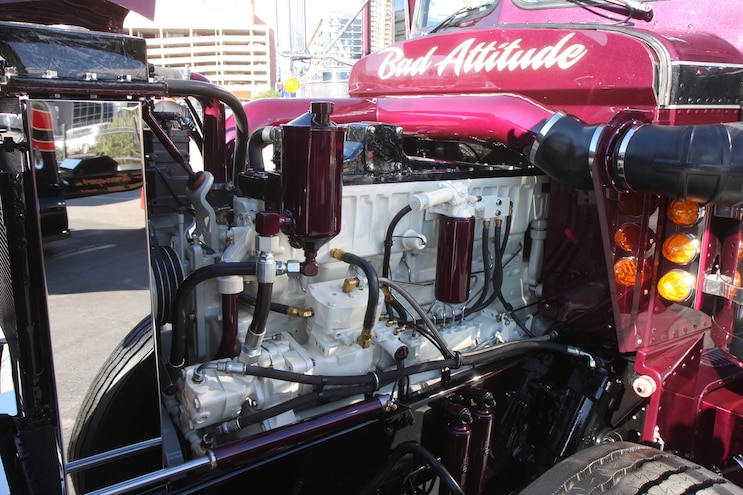 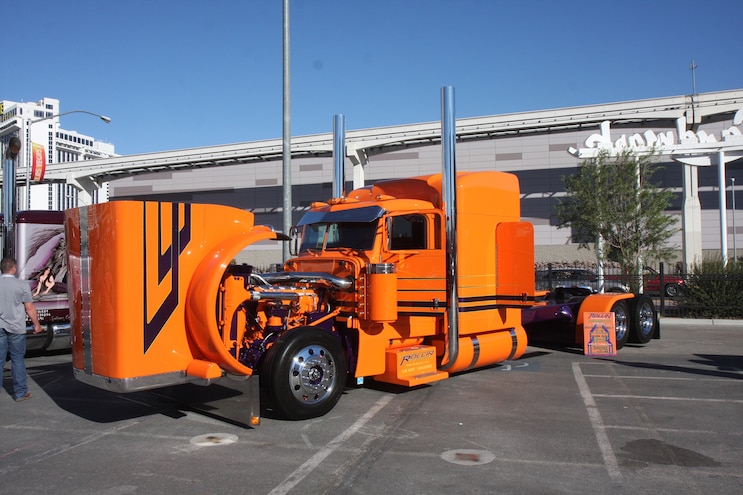 View Photo Gallery | 15 Photos
Photo 7/15   |   Trendsettin’ is a ’13 Peterbilt powered by a Cat C-18 diesel. Bold orange paint and purple scallops stand out when rolling down the road, and subtle lime-green pinstripes add some wow when checking it out up close. The detailed paint extends under the tilting engine cover, where everything is decked out in chrome or body colors. 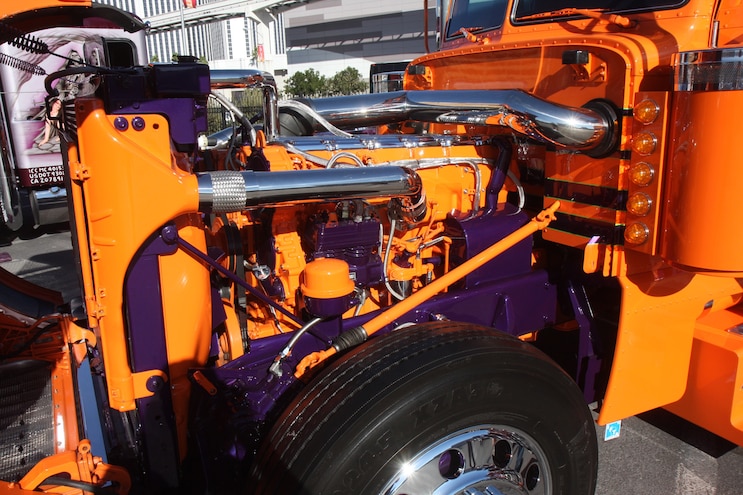 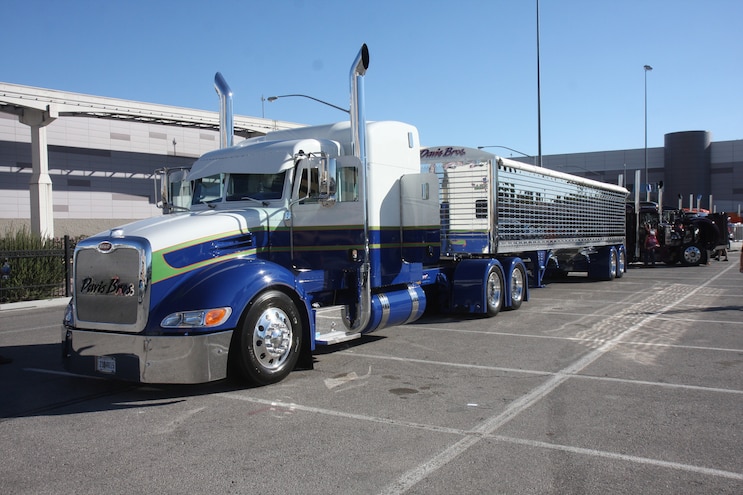 View Photo Gallery | 15 Photos
Photo 9/15   |   Built by Davis Brothers Designs, this ’15 Peterbilt 386 has a clean, sleek look about it, but that’s not to say it’s boring by any stretch of the imagination. Particularly when paired with the polished trailer behind it, Buzz Kill drew a big crowd. 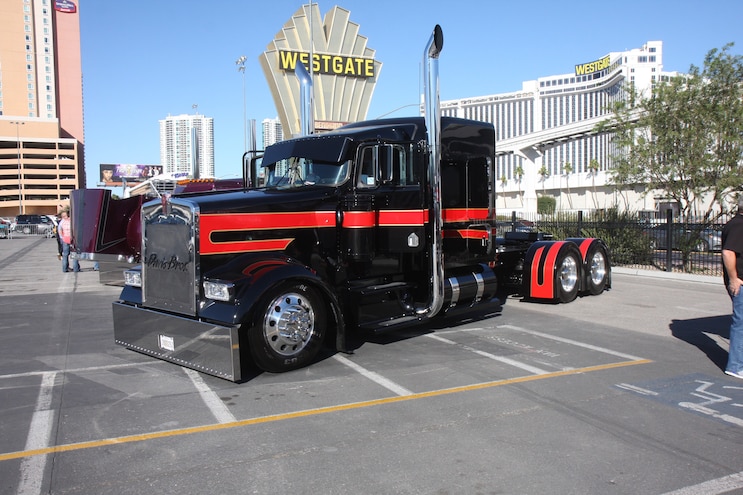 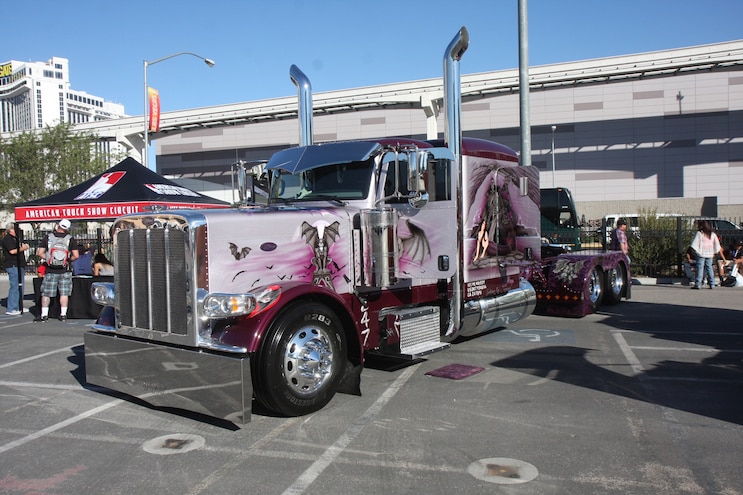 View Photo Gallery | 15 Photos
Photo 11/15   |   Wicked, a ’15 Peterbilt 378, belongs to Lil Ray’s Transport. This truck has won several truck shows around the country, and it’s not hard to see why. With custom, airbrushed artwork all over, the rig wouldn’t look out of place in Count Dracula’s warehouse. 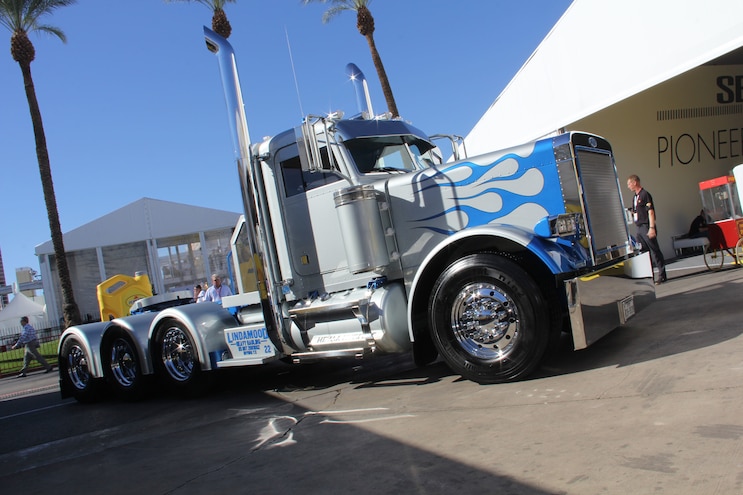 View Photo Gallery | 15 Photos
Photo 12/15   |   Turn to the month of April in your 2017 Shell ROTELLA calendar and you’ll find Jake Lindamood’s ’88 Peterbilt 379. This killer 2016 Shell ROTELLA SuperRigs Best of Show Winner was spotted across the street at the SEMA Show. 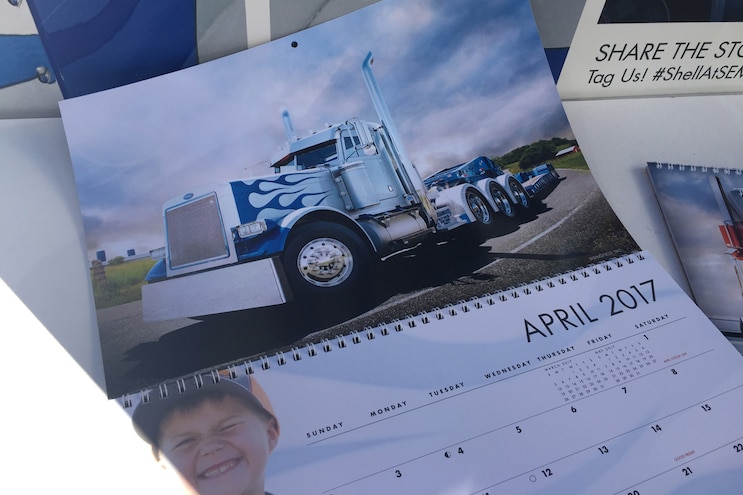 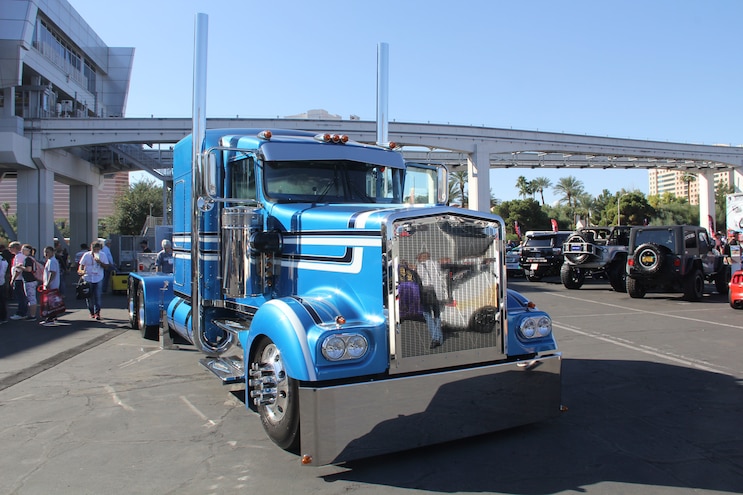 View Photo Gallery | 15 Photos
Photo 14/15   |   Not part of ATSC, but rather inside the confines of the SEMA Show, was this beautiful blue rig from 12Gauge Customs, one of its most recent builds for C&J Bark Haulers. It drew massive crowds all week long. 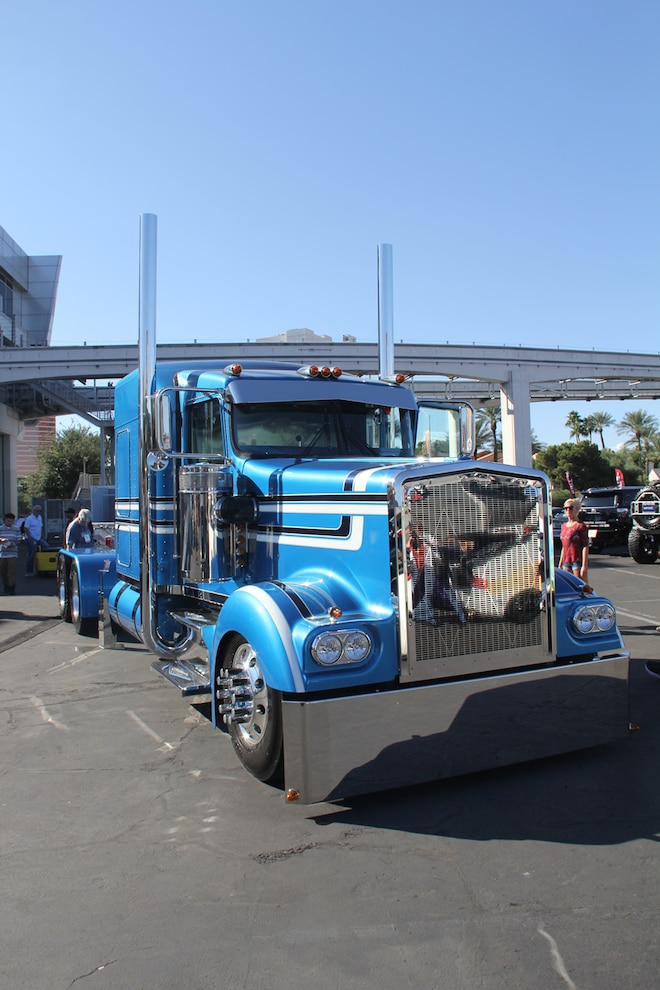 - OF
By Monica Gonderman
665 Articles