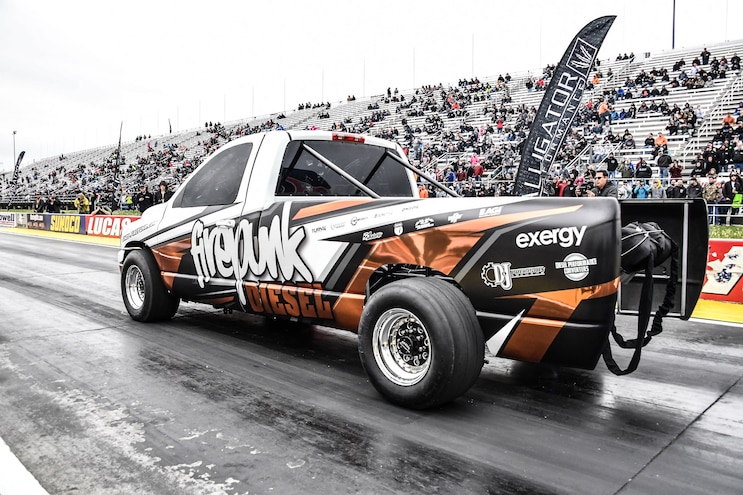 In the short timeframe of only two years, the Ultimate Callout Challenge (presented by Alligator Performance) has grown tremendously and become firmly entrenched in the performance-diesel landscape.
“UCC,” the brainchild of Northwest Dyno Circuit’s James Brendle and Brandon Pierce, is now the hobby’s highest-profile, high-stakes ($60,000 in total payouts) competition, drawing the most well-known players in the game, as well as sponsors and fans. Per diesel enthusiasts from literally around the world (our Facebook Live feeds had viewers from as far away as Sweden and Australia), Ultimate Callout Challenge is the diesel scene’s pinnacle event, its Super Bowl. After votes are tallied, it affirms the hobby’s proverbial “best” driver, truck, and, in many cases, team (at least until the following year). 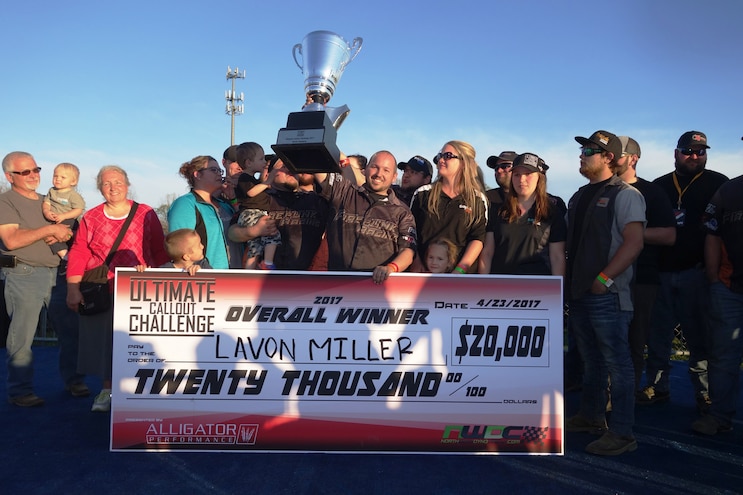 View Photo Gallery | 44 Photos
Photo 2/44   |   Once again, the winner of the Ultimate Callout Challenge is… Yes, by using the consistency, tact, and teamwork that have become his trademark for diesel competitions, Lavon Miller and the Firepunk Diesel gang earned the UCC 2017 overall victory and the $20,000 “big check (along with additional payouts for winning the drag race segment and placing Second on the dyno).”
In April 2017, the Challenge took over a new venue: the legendary dragstrip and sled-pull pit at Lucas Oil Raceway in Indianapolis, Indiana. There, 27 drivers and their teams waged war in the three major categories of diesel competition, laying everything on the line in an effort to score valuable points in Drag Racing (quickest elapsed time), Dyno (combined horsepower and torque), and Sled Pull (greatest distance) events.
In addition to the competitive events, UCC hosted a show ’n’ shine packed with beautiful rigs, and the Challenge also served as the launch pad for a new manufacturers’ mega-midway called the Diesel Performance Industry Expo. Over the course of three days, DPI hosted thousands of fans and representatives from more than 100 aftermarket companies, large and small. “Diesel is a small segment of the annual Performance Racing Industry trade show, and with PRI being closed to the general public, people don’t get the same level of exposure to the big performance companies that we believe they should have,” James says. “We want the UCC and DPI expo to continue growing and to ultimately bring everyone involved with our industry to the same place at the same time, every year.”
For the second consecutive year, Lavon Miller and his Firepunk Diesel teammates are Ultimate Callout Challenge champions—the undisputed best of the best in events that measure trucks’ and drivers’ performance in the three primary disciplines of diesel competition. Diesel Power definitely plans to be at UCC for many years to come, bringing you photo highlights (and video that can be viewed on trucktrend.com) of an event we believe has the potential of becoming even bigger and better as time goes on. 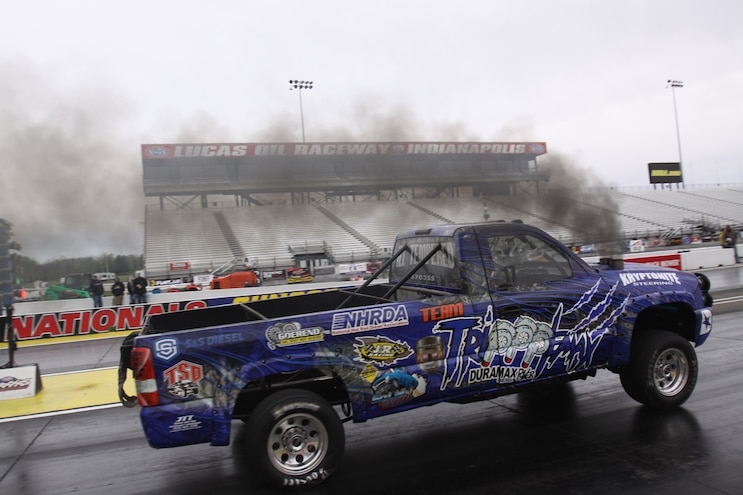 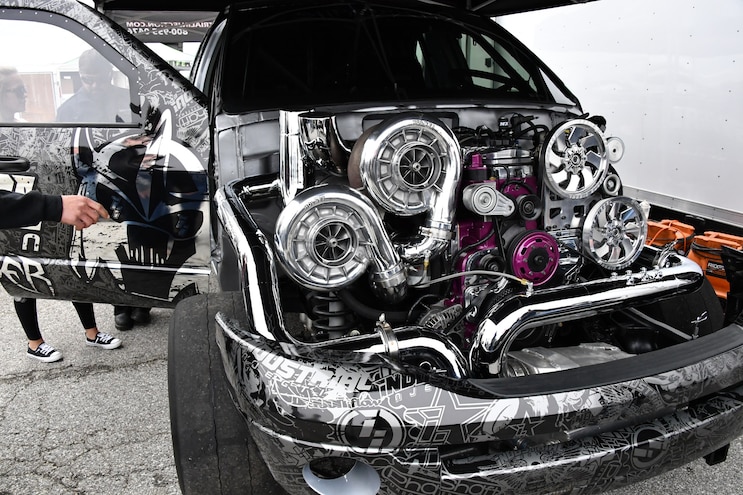 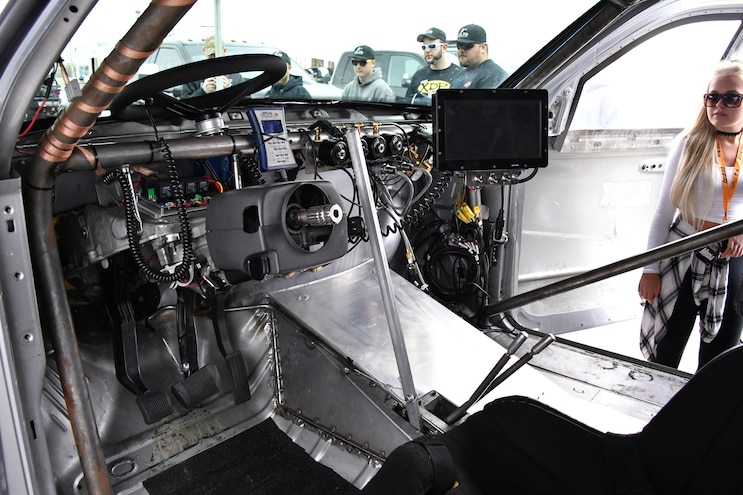 View Photo Gallery | 44 Photos
Photo 6/44   |   Shawn Baca’s “Master Shredder” arrived at UCC 2017 sporting its familiar triple-turbocharged Cummins engine, with an added surprise in the cockpit. Notice the “third pedal” and two stick shifts poking through the floor? Unfortunately, Shawn found himself fighting gremlins brought about by the switch to a manual transmission, which ultimately put him outside the Top 10. 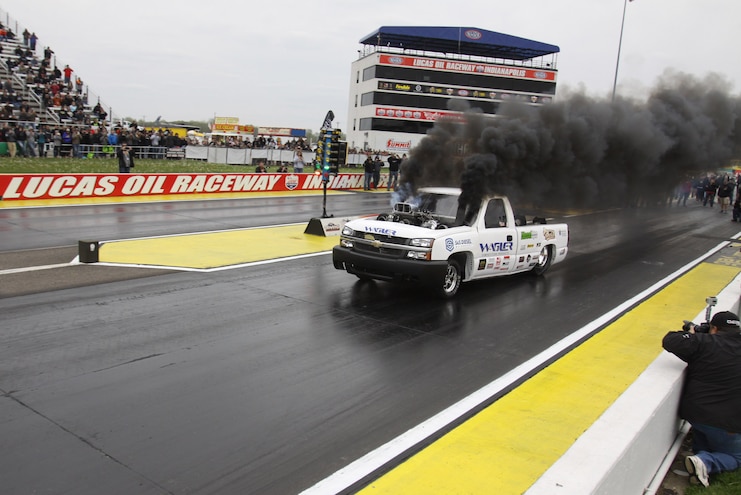 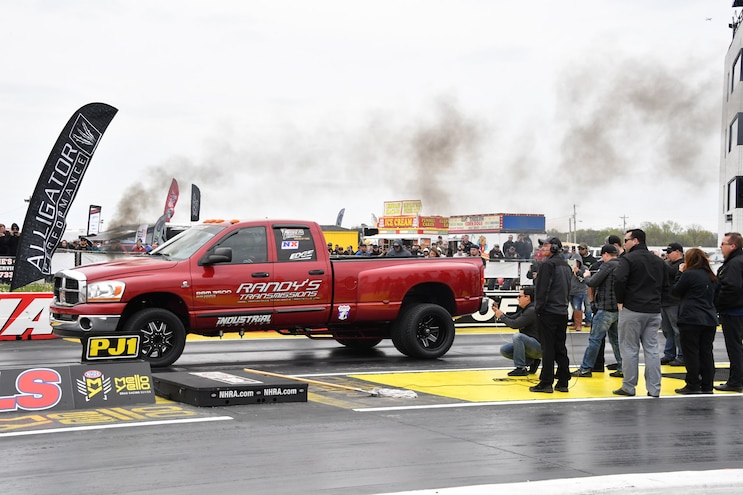 View Photo Gallery | 44 Photos
Photo 8/44   |   Randy Reyes’ Super Freak Dodge Ram dualie had a difficult time finding traction on the dragstrip and suffered a completely pretzled driveshaft in the sled pull. However, and as expected, Randy’s dyno performance was excellent. 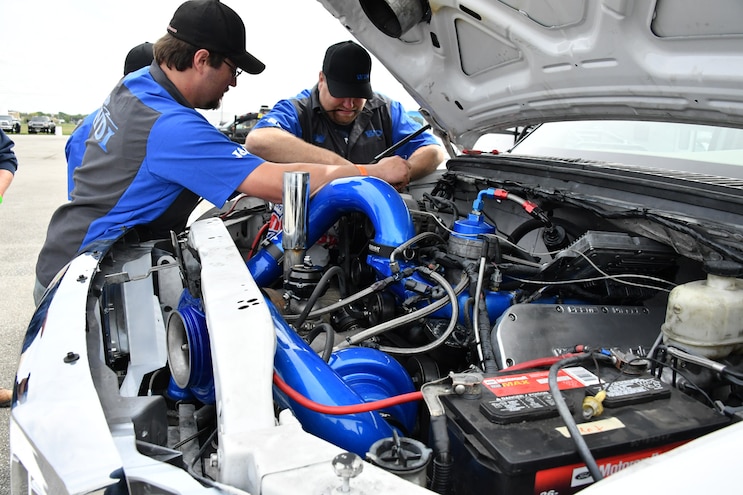 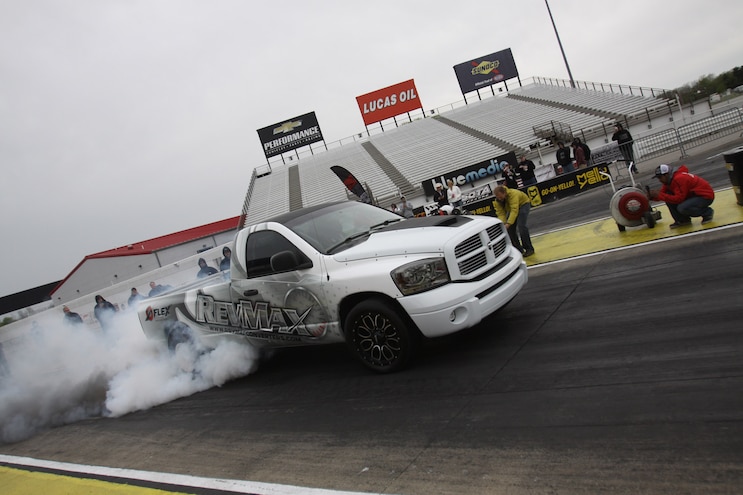 View Photo Gallery | 44 Photos
Photo 10/44   |   We have to tip our hat to Tom Hauser, who drove his Revmax-sponsored Ram to personal victory by simply completing the event. While all the other entries were towed to and from Indianapolis, Tom’s rig was driven round-trip from North Carolina to Lucas Oil Raceway. 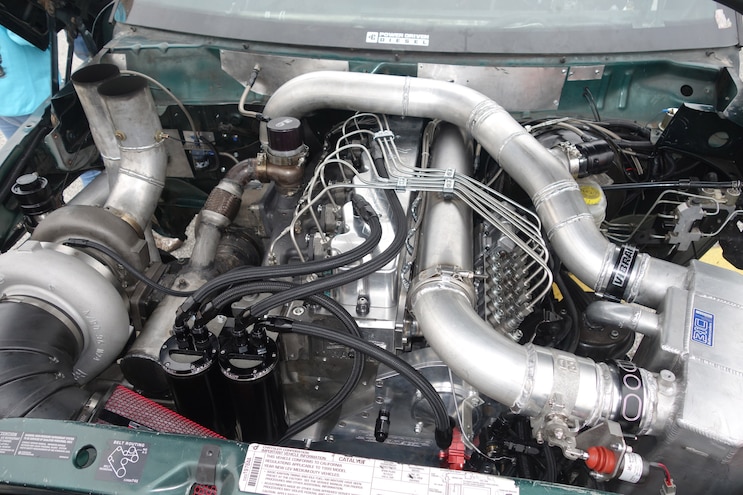 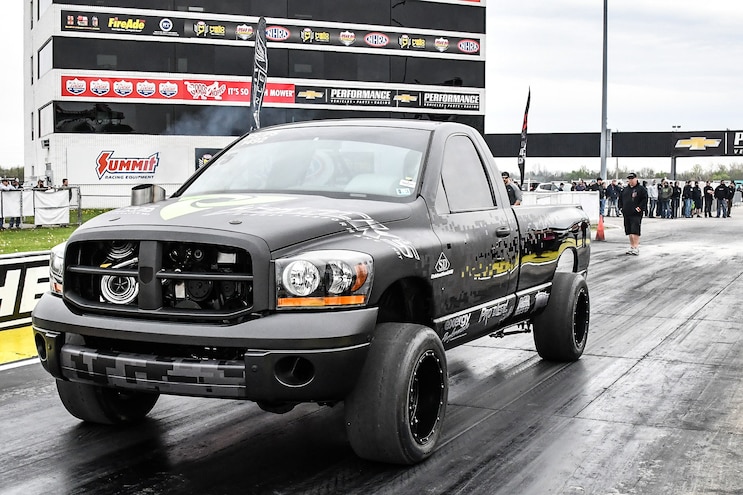 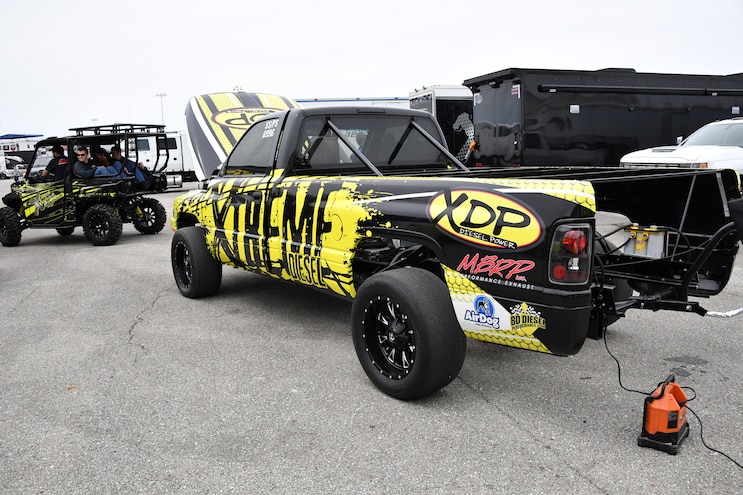 View Photo Gallery | 44 Photos
Photo 13/44   |   The XDP-backed Dodge Ram is another truck that fared poorly in two of the three UCC 2017 events. A broken turbocharger and other problems kept Anthony Reams far out of the hunt for winning the title. 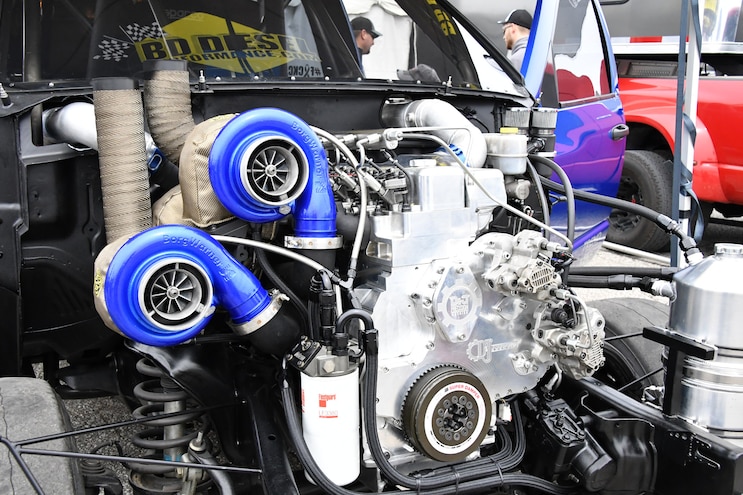 View Photo Gallery | 44 Photos
Photo 14/44   |   By just a mere 49.46 points and in a battle with Lavon that went down to the wire, Derek Rose repeats as the Second Place overall finisher in the Ultimate Callout Challenge. 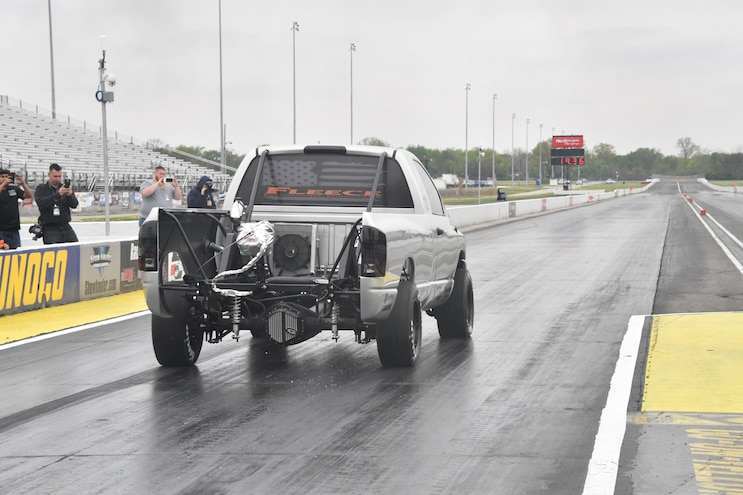 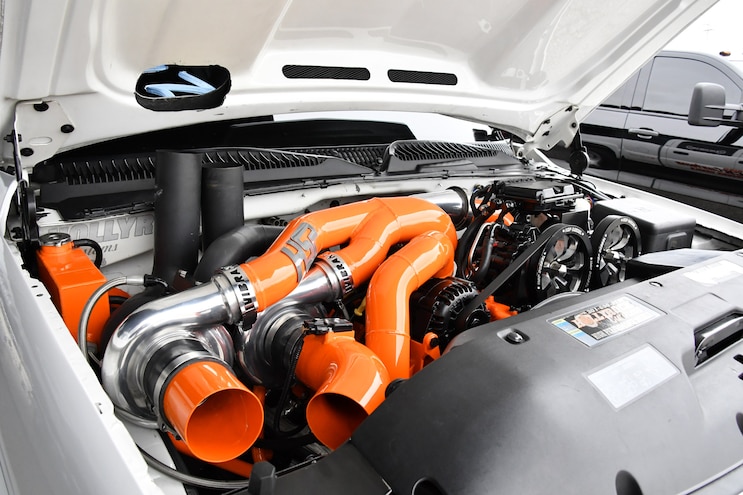 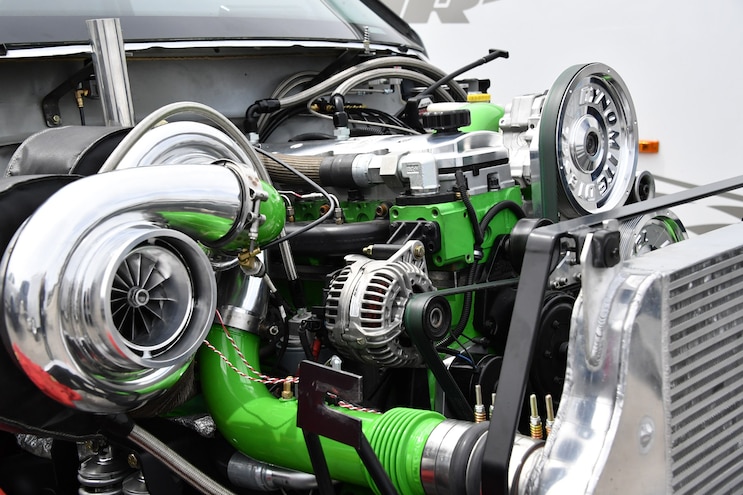 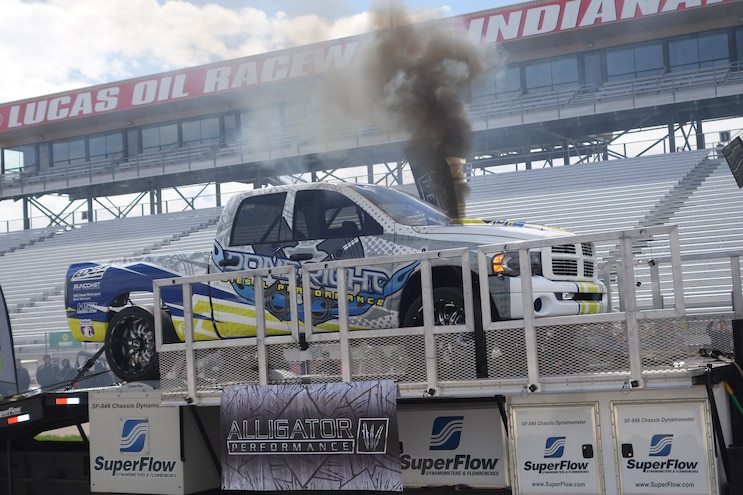 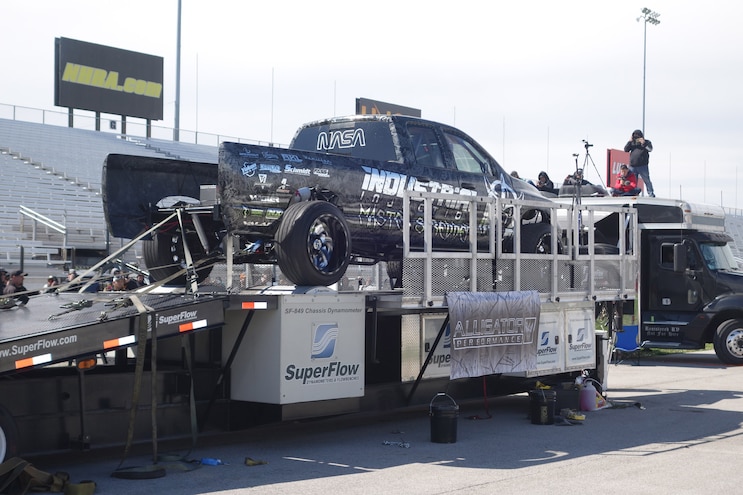 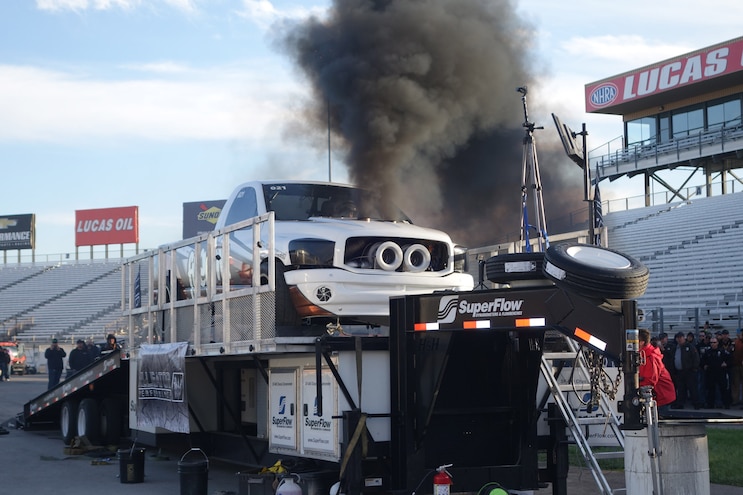 View Photo Gallery | 44 Photos
Photo 20/44   |   The Firepunk Diesel team definitely burned the midnight oil, reconfiguring Lavon’s Dodge Ram three times—once for each segment of the Challenge. In this photo, two huge turbochargers sit front and center in the grille, feeding atmosphere to a full-on D&J Machine–built, mechanically fueled “pulling motor (a Sigma-pumped engine designed specifically for sled pulling)” that was used only for the dyno portion. 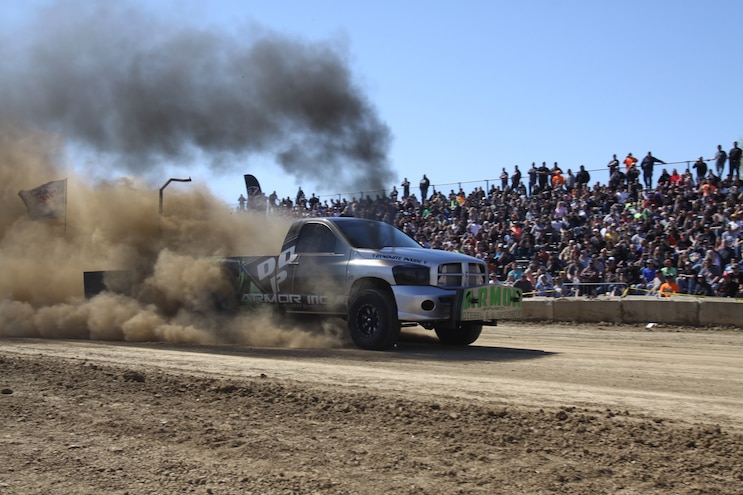 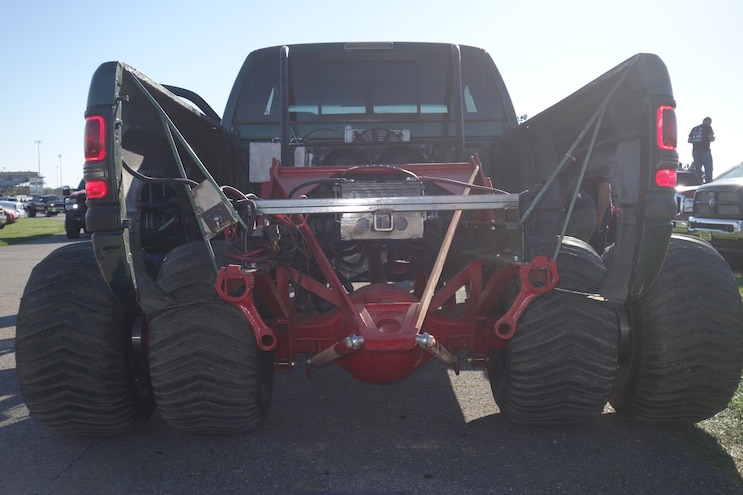 View Photo Gallery | 44 Photos
Photo 22/44   |   Todd Welch’s old-school approach to conquering the sled pull was spot on. With a heavy-duty rearend and dualie conversion sourced from a junkyard, the Power Driven Diesel Dodge Ram crushed the sled-dragging event, with a winning distance of 321.02 feet. 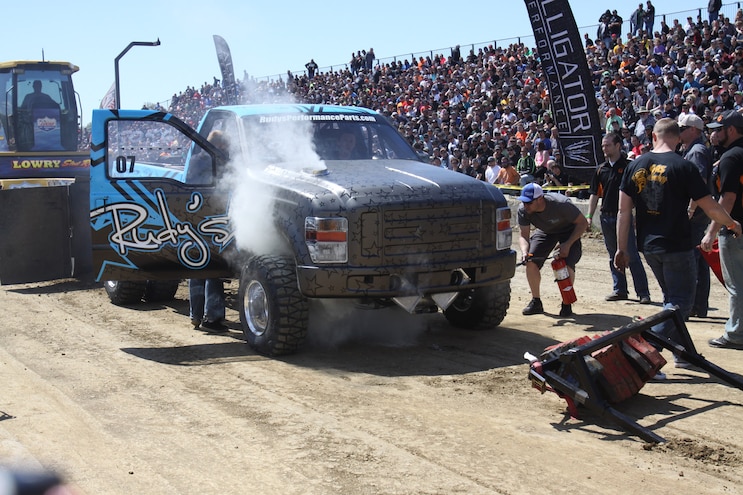 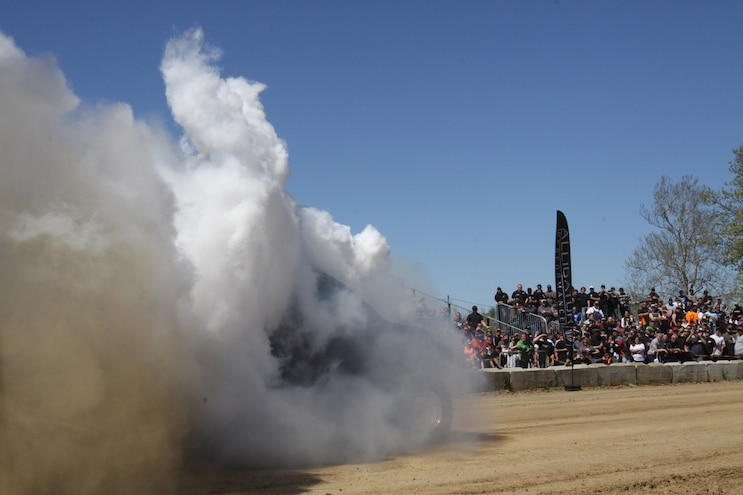 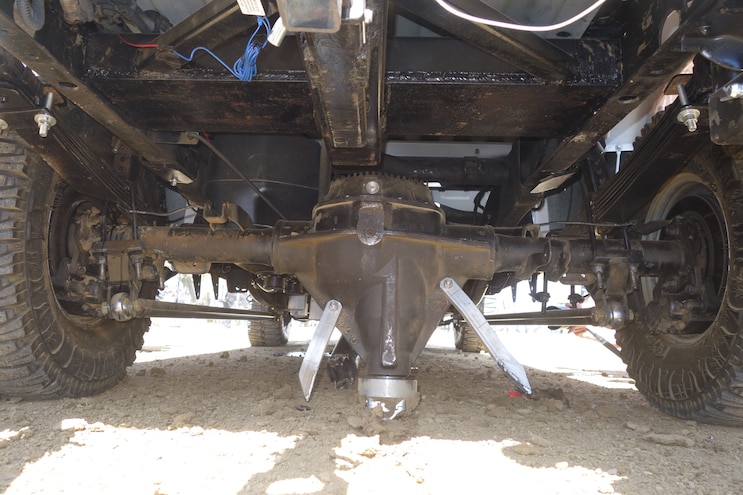 View Photo Gallery | 44 Photos
Photo 25/44   |   We saw all sorts of carnage happen at UCC 2017. Engines and transmissions failed on the dyno, and the sled-pull track laid claim to driveline and other pieces on several competitors’ rigs. 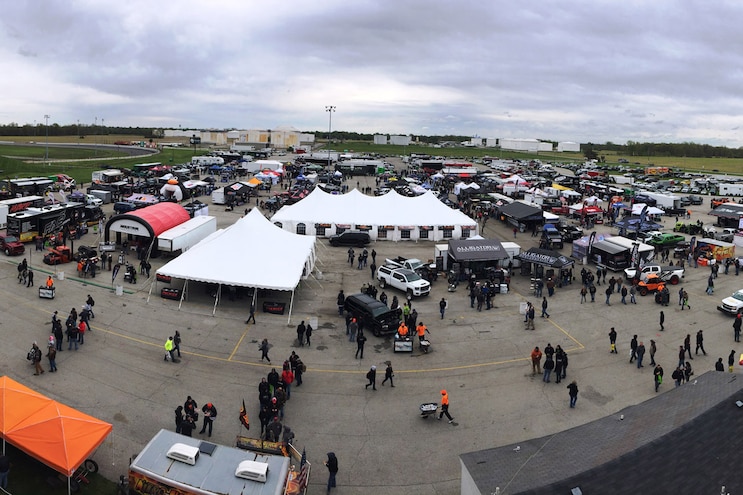 View Photo Gallery | 44 Photos
Photo 26/44   |   The Diesel Performance Industry expo made its debut at UCC 2017, with more than 100 vendors and aftermarket manufacturers displaying the latest upgrades and new products for enthusiasts who kept the midway packed all weekend. 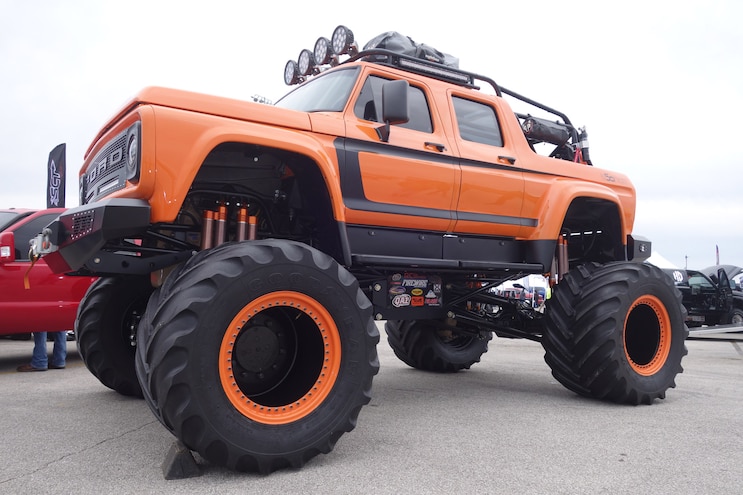 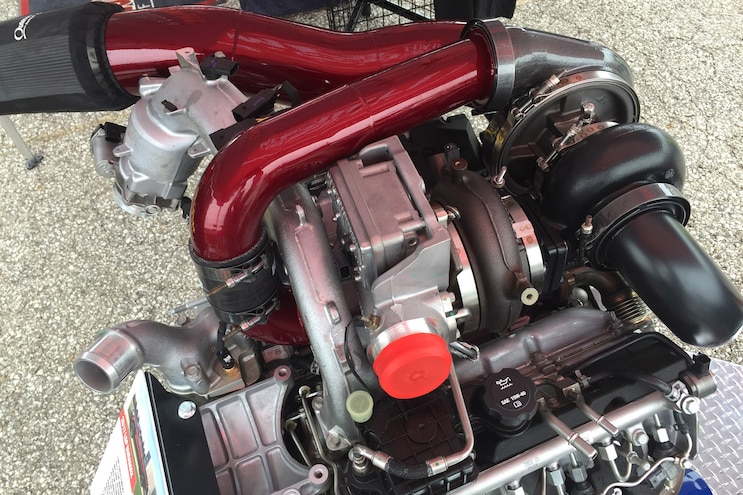 View Photo Gallery | 44 Photos
Photo 28/44   |   Props to the crew at Wehrli Custom Fabrication for completing the first (and only, as of this writing) compound-turbocharger system for the all-new, 6.6L Duramax L5P engine—just in time to display it at DPI. 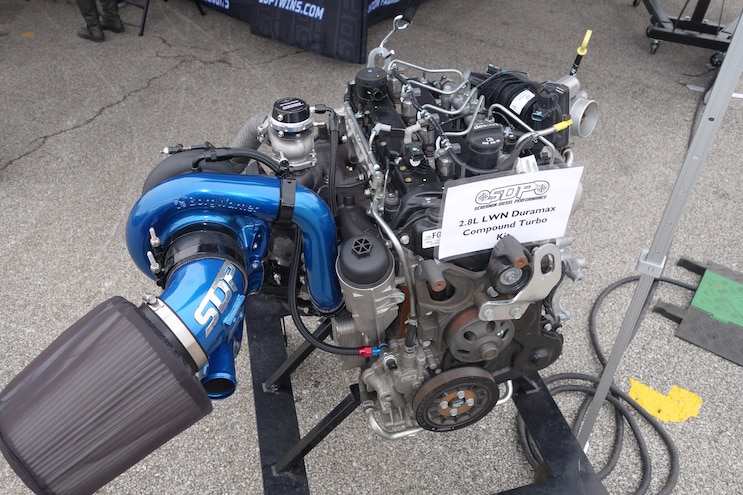 View Photo Gallery | 44 Photos
Photo 29/44   |   We’re pretty excited about the work Screamin’ Diesel Performance is doing with the 2.8L Duramax LWN I-4 engine. The company showed off its compound-turbocharger package for the “Baby ’Max” and introduced stout, new H-beam connecting rods that Carrillo has developed for the little oil-burner.