Cummins Fans Take R2.8-Swapped Rigs on an Epic Cruise Across the Pacific Northwest 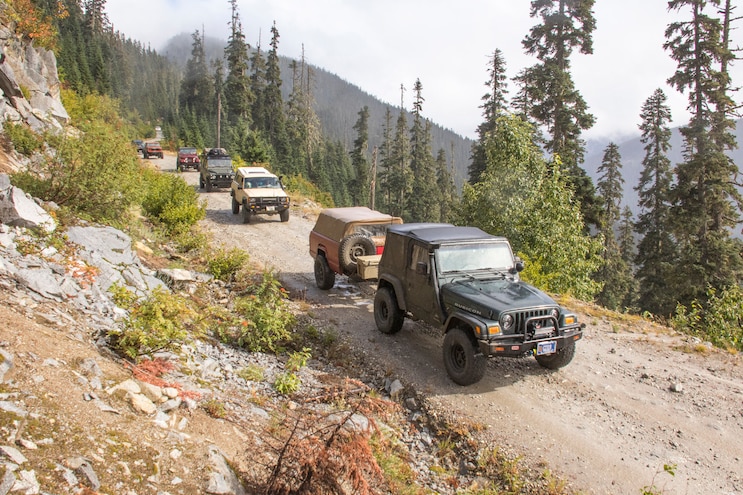 “I installed the Cummins 2.8L turbodiesel engine and headed across the country for a testdrive.” Climbing into his Land Rover Defender 110, Ron Thomas pontificated the virtues of the latest modification to his olive-drab utility rig. We were somewhere between Bozeman, Montana, and the Pacific Ocean, mid-span on Cummins Repower Cruise 2018—and nearly 2,000 miles from Ron’s home near Detroit. Not a bad testdrive!
In the parking lot were Jeep Wranglers and Grand Cherokees, corn-binders and Dodge Ram Power Wagons, a few Land Rover Discoverys, and the odd man out: a pancake-flat Vixen motorhome. The Cruise wasn’t an organized pay-to-play event, but an ambulatory gathering of staunch Cummins aficionados, most of whom were using the company’s drop-in–ready R2.8 I-4.
I joined the convoy in Idaho Falls, Idaho, for an evening barbecue at Legacy Classic Trucks, purveyors of exquisite vintage truck restorations. The next morning, I slipped into one of the Discos with Stephen Sanders, Repower program manager. As we made our way north toward Montana, he shared details of the 2.8L’s pedigree and the early workings of the company. With Cummins’ 100th anniversary on the horizon, the following hours were an edification into America’s diesel days of lore (stay tuned to Diesel Power for more on this). 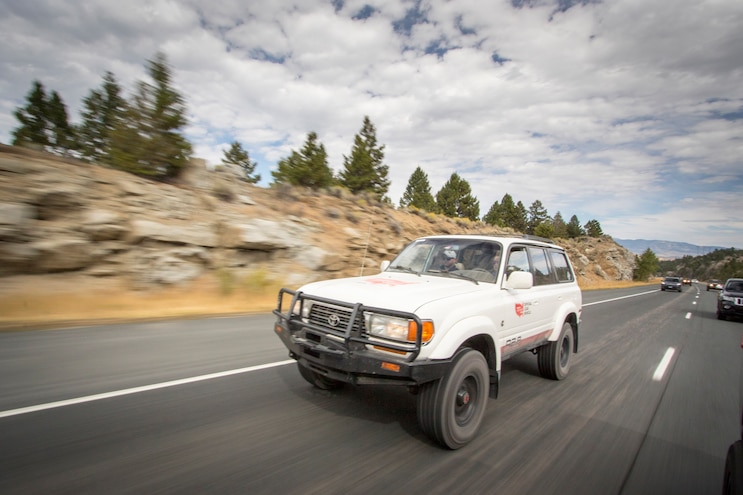 View Photo Gallery | 72 Photos
Photo 2/72   |   The Cummins R2.8-powered ’96 Toyota 80 Series Land Cruiser leads the Repower Cruise crew through western Montana.
The 2.8L diesel powerplant is no stranger to the world, but its target genre has been international markets—predominantly small commercial applications—rather than grassroots engine swaps. The Repower aspect (thus the “R” prefix) is the release of Cummins’ new PP1 ECM calibration, a reflash that updates the torque curve, throttle mapping, cold-weather operations, and mass-airflow offset correction. (Already have an R2.8? No worries, the Repower calibration is a free upgrade). The net effect is an increase in torque and horsepower, which hit the dyno at 310 lb-ft at 1,800 rpm and 161 hp at 3,600 rpm.
Climbing the long grades, I observed the R2.8’s smooth power curve and ability to chug along without feeling the need to find a lower cog. A few weeks earlier, Steve’s Land Rover rolled out of the Cummins facility in Columbus, Indiana, and averaged 22 mpg fuel economy, a fair margin above the truck’s original engine. The R2.8 had my attention, but you’ve got to spin the gas meter quite a bit to make an engine-swap balance sheet work—unless the existing engine is ready for a refresh anyway.
In a world of increasing energy prices and a focus on conserving resources, performing a heart transplant from petrol to diesel makes more sense than one might think. Life expectancy and fuel economy of a diesel is often double that of a gas mill, and if your thing is lengthy treks into the backcountry, you will rejoice in the extended range experienced before the needle dips to empty. 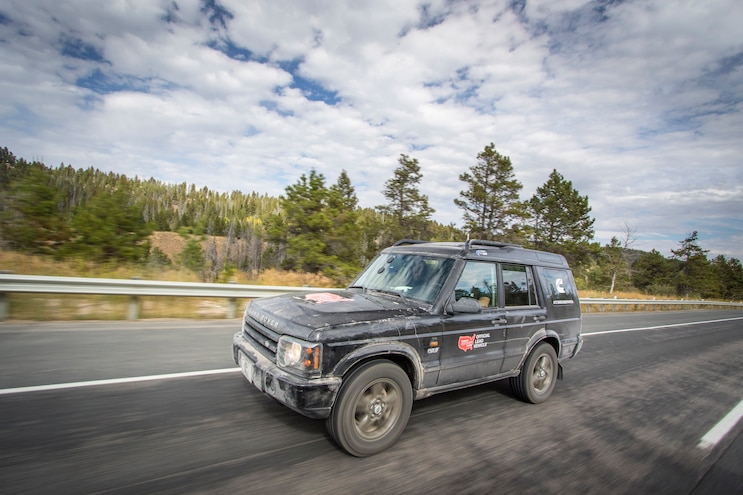 View Photo Gallery | 72 Photos
Photo 3/72   |   Program manager Stephen Sanders drove his Land Rover Discovery from the Cummins factory in Columbus, Indiana.
Cummins evaluated a number of common crate-engine swaps and realized most fall short—leaving the consumer to piecemeal together a laundry list of components to make them run. Their resolve was to offer a “crate” engine that is nearly turnkey. Opening the R2.8 box reveals full front-end accessories, including an alternator, power steering, and water pump, fan hub, and serpentine belt. A quick look around and we find a remote oil and fuel filter assembly, water separator, mass airflow sensor and housing, starter and flywheel, and a cam-driven vacuum pump.
But wait, there’s more. The R2.8 crate kit also includes the ECM and wiring harness with OBD II port, drive-by-wire throttle pedal, and Murphy gauge to display engine vitals like temperature, rpm, fuel economy, engine hours, and such. The wiring harness provides leads for standard warning lamps, tachometer, and key switch, which can be integrated into the original dash or to aftermarket indicators. You basically only need to add fuel and a battery; plumb the exhaust, cooling, and electrical systems; and fire it up. It is not exactly plug ’n’ play, but it comes pretty close to hitting the mark.
While Cummins makes this an attractive option for DYI enthusiasts, performance and off-road shops have gobbled up the R2.8 like a Twinkies at a kindergarten playground. Out of the crate, it’s ready for a manual transmission, and there are several aftermarket adapter options. However, the ECM can communicate with most of the newer electronically controlled automatics. It may take a bit of massaging to get the shift points right, but the processor is a quick learner. With its growing popularity, manufacturers such as Advanced Adapters offer fitment kits for the GM 6L80E six-speed automatic and other popular gearboxes.
Support for DIY R2.8 installers is unrivaled. From comprehensive installation instructions to Cummins’ online Quick Serve system and Ohio-based phone center (yes, a live person based in the U.S.), the company’s top priority is customer satisfaction. There is also loads of community-based information from others who have tackled the install on sites like repowerowners.com. 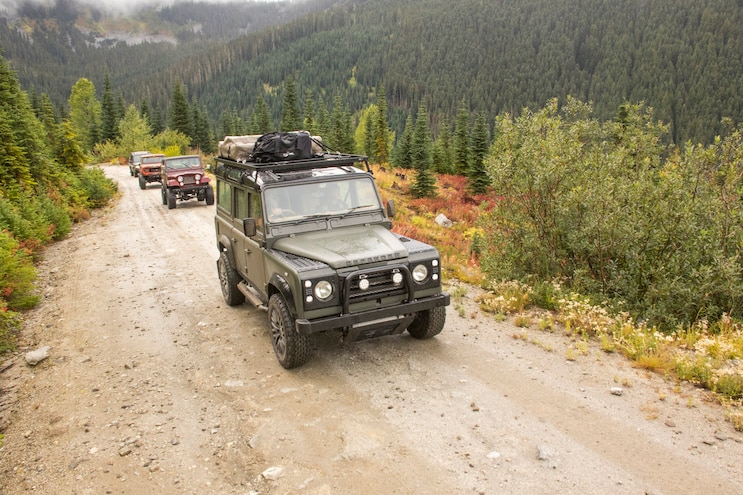 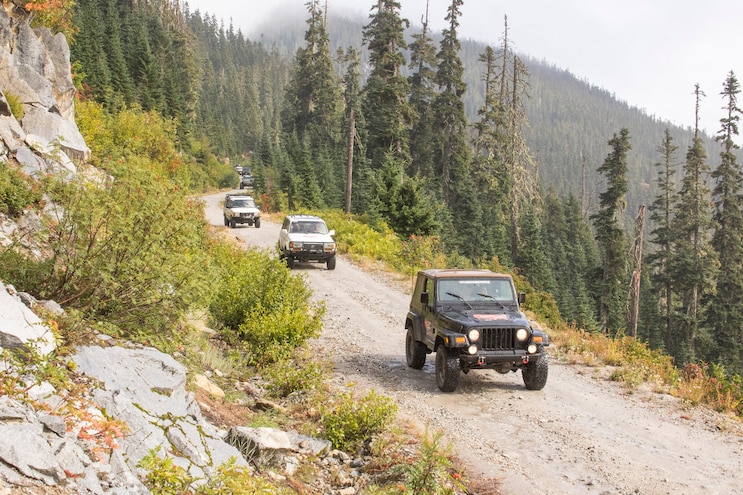 View Photo Gallery | 72 Photos
Photo 5/72   |   If you are into lengthy backcountry adventures, one big plus to repowering with an R2.8 turbodiesel is the extended mileage you will experience on a tank of fuel. 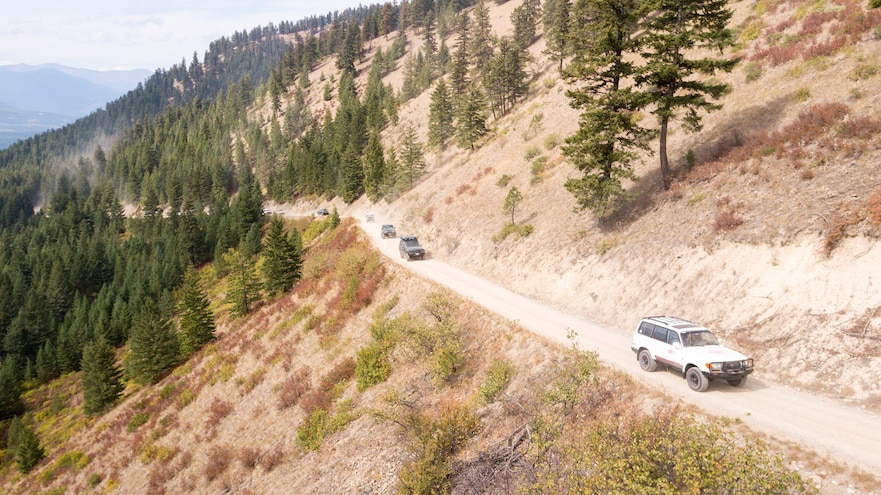 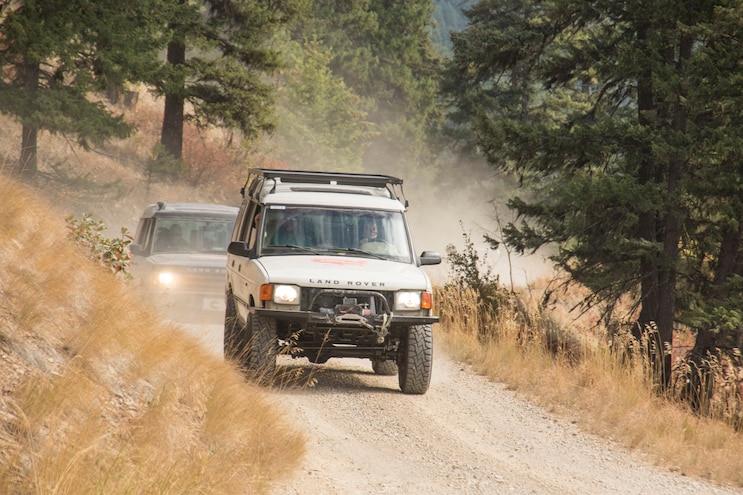 View Photo Gallery | 72 Photos
Photo 7/72   |   At 503 pounds (with most accessories), the engine is a suitable choice for midsize vehicles such as the Land Rover, Jeep CJ, and Toyota pickup. 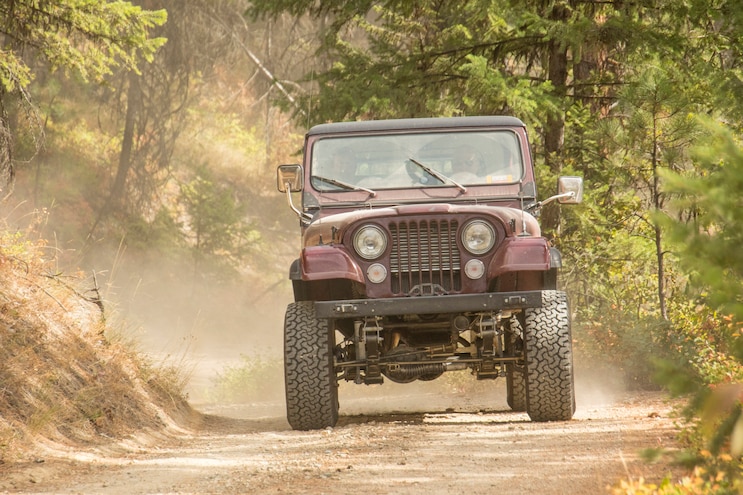 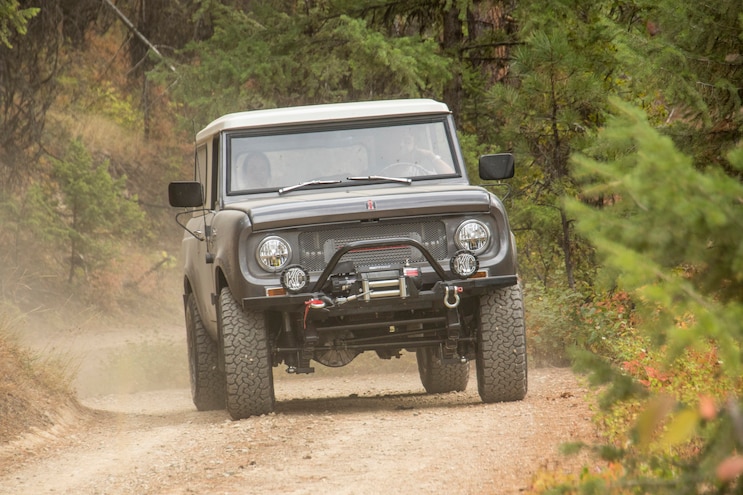 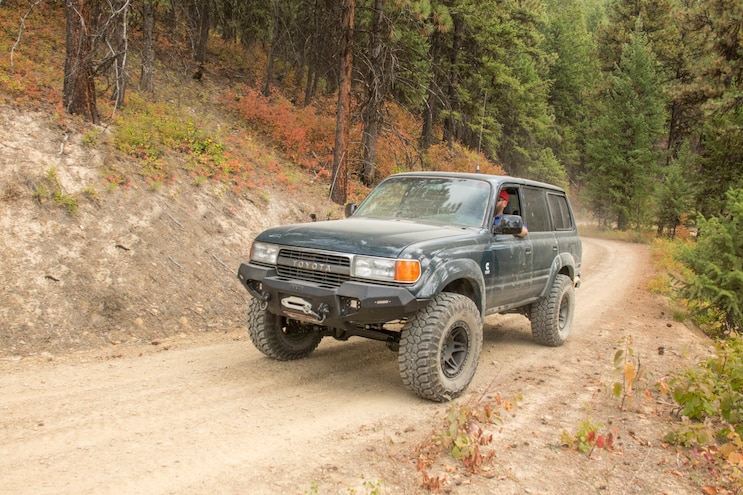 View Photo Gallery | 72 Photos
Photo 10/72   |   Proffitt’s Resurrection Land Cruisers is one of the early adopters of the R2.8 into the 80 Series Land Cruiser. While the 80 was available with a diesel powerplant in nearly all markets, a gas-burning I-6 was the only option in the U.S. 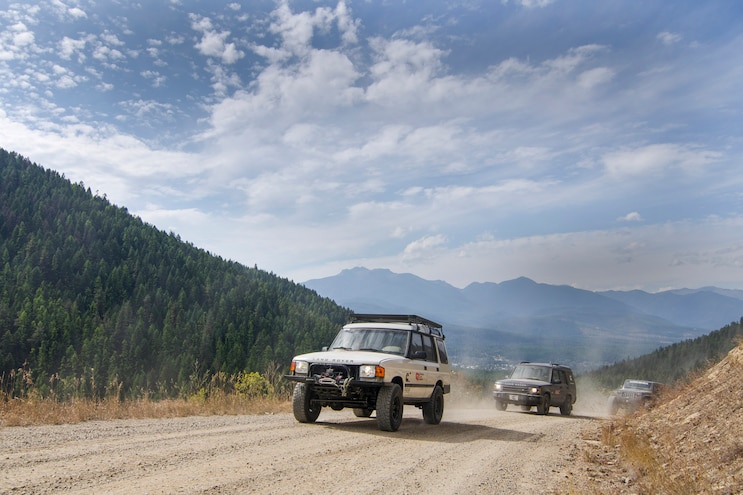 View Photo Gallery | 72 Photos
Photo 11/72   |   Interspersed with stretches of tarmac, the 2018 Cruise traversed Montana and Washington’s forested backroads
The group stopped at one of the many fire lookout towers in Western Montana. 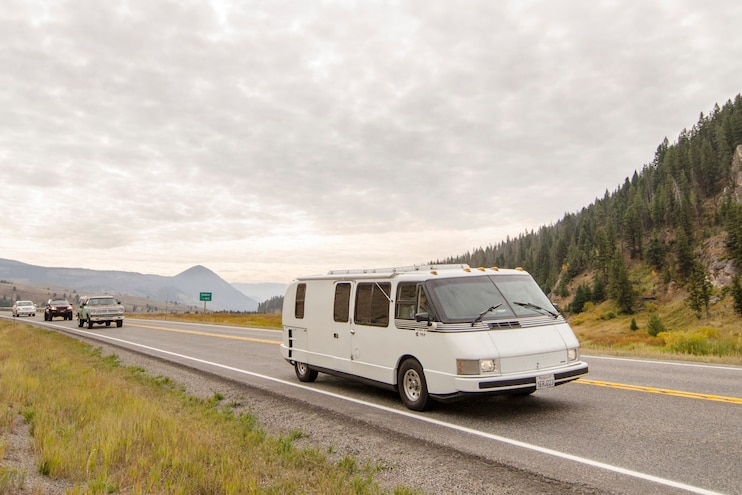 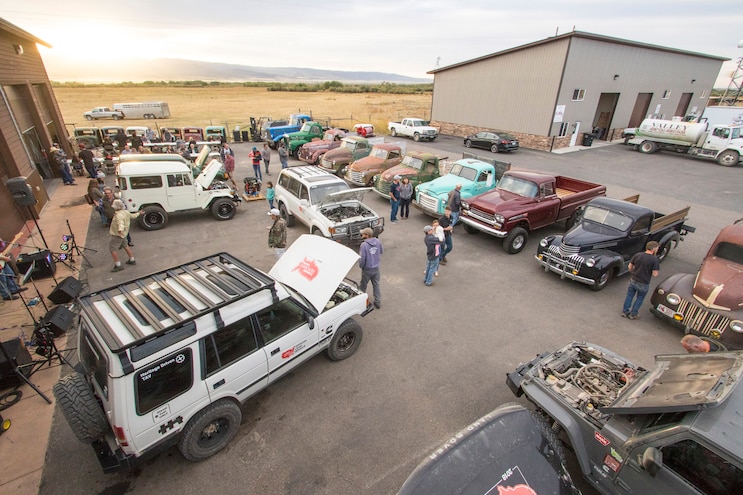 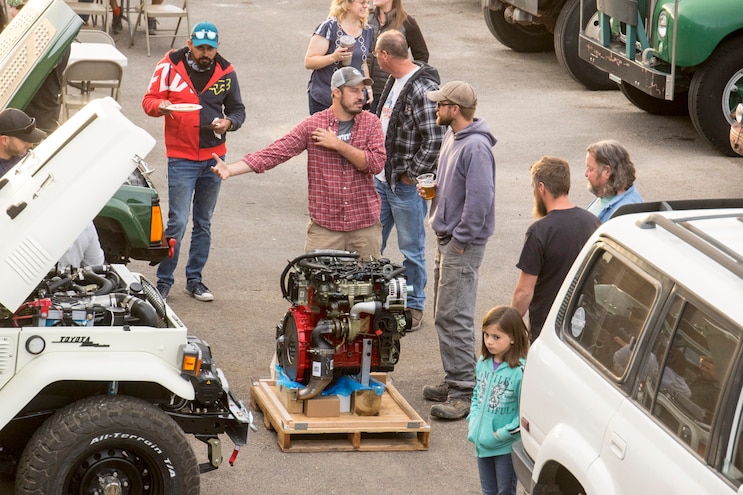 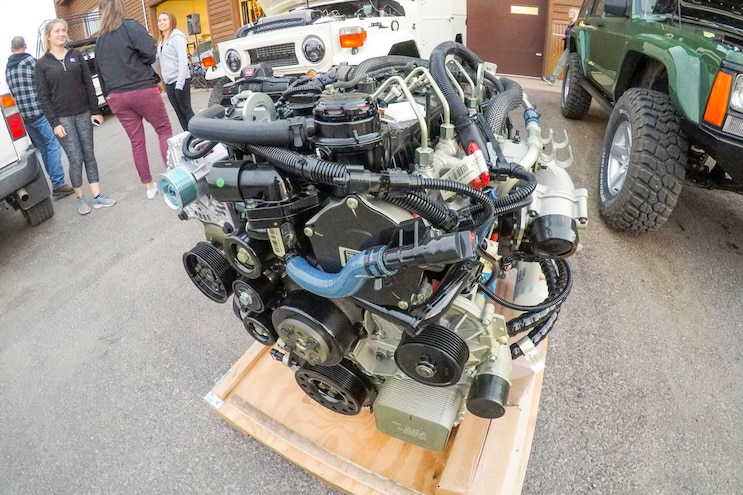 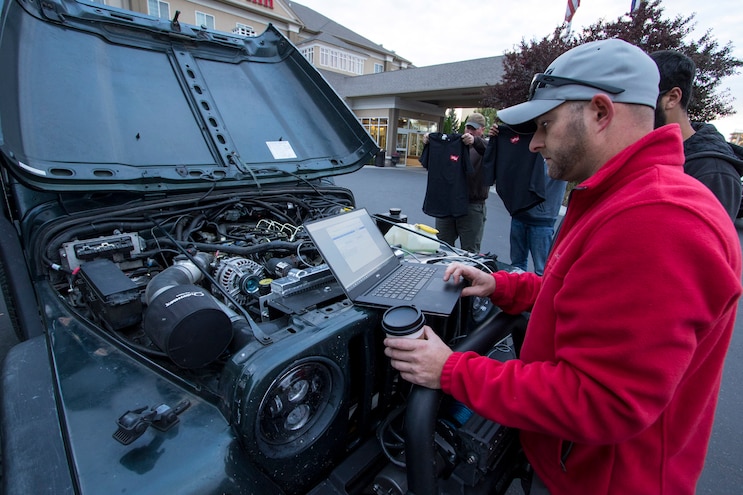 View Photo Gallery | 72 Photos
Photo 20/72   |   Many participants joined the Cruise to have their rigs’ ECM recalibrated; it is a free service for any vehicle with a Cummins R2.8. 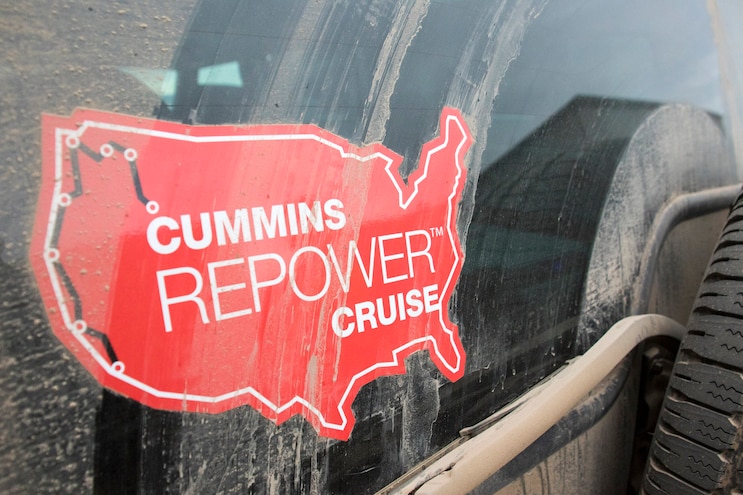 View Photo Gallery | 72 Photos
Photo 21/72   |   The Cruise is a mix of highway with a measure of off-road miles sprinkled in.
The R2.8, which includes nearly everything you need to fire it up, is about as close to turnkey as any “crate” engine we’ve seen.

As we threaded a westward path, I spent time behind the wheel of a pair of ’96 Land Rovers, Discovery I and II, each equipped with a GM 6L90E automatic, as well as a ’99 Jeep Wrangler fitted with an NV3550 five-speed manual transmission. I’m more of a stick guy, and I appreciate the R2.8’s ability to chug along effortlessly while ascending steep grades in Fifth gear. Off-the-line pull on the street and low-end grunt in the off-road segments is everything I expected (low-idle threshold is 800 rpm). It won’t give you whiplash, but that’s not what we look for from a diesel. The sweet timbre of the mill and tailpipe is distinctly oil-burner but far from the eardrum-piercing clatter of the past.
Each day, we visited one of Cummins’ approved Repower Builder shops for another gathering and barbecue. In Bozeman, it was Overland Cruises, then on to Diesel Power Products in Spokane, Washington, and TorFab in Everett, Washington, all of which specialize in R2.8 conversions. As the days rolled on, most vehicles in the group averaged 20 to 23 mpg fuel economy. The exception was the 21-foot Vixen, replete with a galley, restroom, and queensize bed, which pegged the fuel-mileage meter at 29.

The awesome thing about selecting a Cummins as a swap engine is that you won’t catch any slack from the hardline Chevrolet, Ford, Toyota, or Land Rover crowd—everyone loves a diesel, and one that sports Clessie’s moniker is usually praised by all. When you consider the dozen ancillary components included in the R2.8 package, the $8,999 price tag is right in line with, if not lower than, other crate-engine options. If maintained properly, the R2.8 should see a swap rod through a half-million miles.
I peeled off in Portland, Oregon, while the crew picked up a few more diesel fans and pointed the wheels south on the Pacific Coast Highway toward Southern California. The Cruise is akin to dining European style at the Hofbrauhaus in Munich; pints are shared, strangers become friends, and plans are hatched for future adventures. The Cummins Repower Cruise is, in fact, a great American road trip.

- OF
By Chris Collard
6 Articles