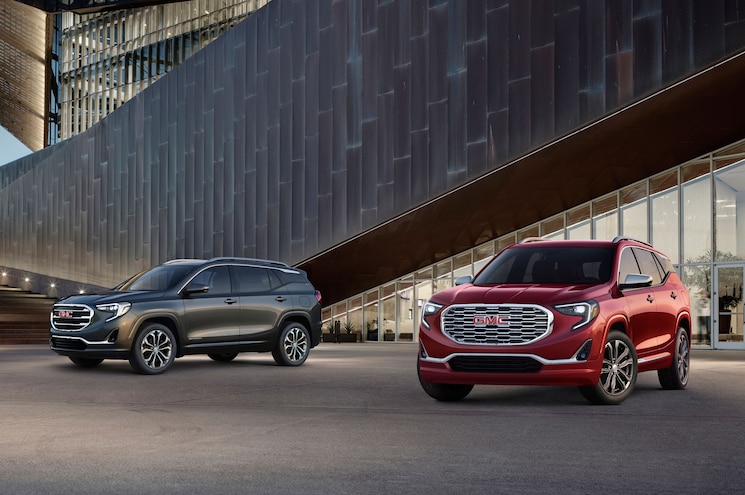 General Motors surprised many and made good on its promise that light-duty diesels would play a more prominent role in its mainstream lineup when it announced the availability of an I-4 turbo diesel on the 2018 Chevrolet Equinox. The Equinox’s platform mate, the GMC Terrain, follows suit with a diesel option, as well as going all four-cylinder. Trim levels on the 2018 GMC Terrain follow suit of its predecessor with SL, SLE, SLT and Denali trims. The new front end styling shows a resemblance to the 2017 Acadia with an eight-sided grille opening. However, the side profile shows influences of the Nissan Murano and Lexus RX.
Like the Equinox, the Terrain goes all-turbocharged, and all I-4 for 2018. The base engine is a 1.5L direct-injection I-4 turbo producing 170 hp and 203 lb-ft of torque. A 2.0L I-4 turbo is available with 252 hp and 260 lb-ft of torque. Both gas engines are mated to a nine-speed automatic. Those seeking maximum fuel economy can get a 1.6L I-4 turbo diesel rated at 136 hp and 236 lb-ft of torque mated to a six-speed automatic. To free up more space in the center console, a traditional shifter is replaced by GMC’s Electronic Precision Shift system, which uses a cluster of buttons and levers for gear selection.
Terrain Denali models get 19-inch wheels, a unique chrome grille, door handles and accents, and body-color front and rear fascias and lower trim. The Denali also gets standard LED headlights. Lower-trim Terrain models feature LED running lights and available HID headlights. The SL and SLE trims get standard 17-inch wheels, and optional 18-inch wheels, which are standard on the SLT trim. Additional standard equipment on the Denali are a heated steering wheel, navigation, 7-speaker premium Bose audio system and programmable power liftgate.
A 7 or 8-inch touchscreen display integrates Android Auto and Apple CarPlay functionality, and OnStar 4G LTE integrated mobile data hotspot is available. Safety is a strong selling point among crossover shoppers, and to keep the Terrain competitive, available features include a surround vision camera system, forward collision alert, lane keep assist, lane change alert, rear cross traffic alert, safety alert seat, and GM’s rear seat reminder. The 2018 Terrain also features the Teen Driver system allowing parents to set parameters and receive a vehicle report card to encourage more responsible driving habits. The 2018 Terrain will go on sale this summer. Pricing will be announced closer to its retail availability.
Source: GMC