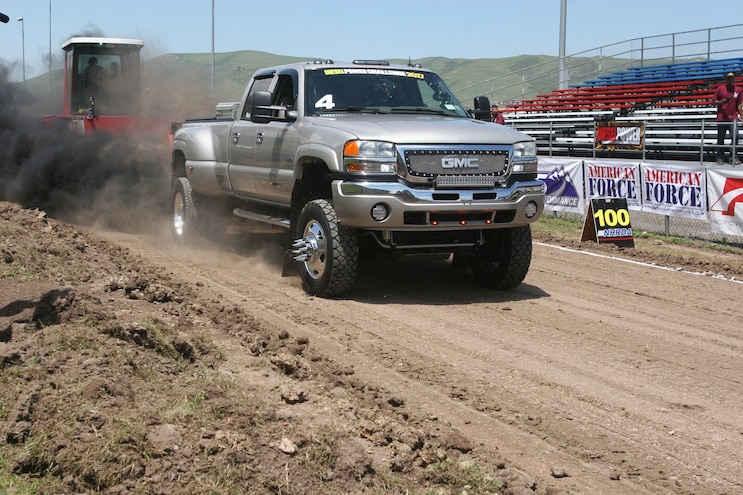 The close of Diesel Power Challenge 2017 Presented by XDP’s Day 4found competitors burning the midnight oil, thrashing to repair damage and have their trucks ready for Day 5, the final day of DPC2017 competition.
Unfortunately, Shaun Doran and McCoy Black were unable to remedy the mechanical issues their rigs were suffering from and could not participate in the competition-closing sled pull.
The attrition left seven participants remaining in the event, and drivers opened the last day by crossing the scales to have their trucks’ official weight recorded, and then heading to Bandimere Speedway in Morrison, Colorado, for the pull. Each competitor showed up with his game face on, and a mission to try and tilt the odds of winning DPC in their favor.
In front of live cameras, Rich Strube got things under way with his big ’05 GMC Sierra 3500HD, pulled the sled down the course to 272.63 feet. The next driver, Kevin Jacob, was only able to make it 154.29 feet before his ’05 Dodge Ram 2500 would not proceed any further. Tim Jahn followed Kevin, and used his ’08 Ford F-250 to set a new high bar of 309.00 feet. With a new distance to beat, Levi Krech came out swinging but was only able to coax his ’06 Dodge Ram 2500 to 195.07 feet before it lost all forward momentum.
The reigning DPC champion, Charlie “Six-Liter” Keeter, had no intention of rolling over for the competition. Charlie’s ’04 Ford F-250 rolled out with guns blazing (or, more appropriately, nitrous-oxide nozzles spraying). With his hand mashing the button, Charlie’s rig screamed down the track to the 350.32-foot mark and the lead, while shooting flames out of the exhaust and blowing off an intercooler line in the process. The two remaining competitors, Mike Bunkelman and Patrick Whitcomb, attacked the course with every intent of winning and made great pulls, but neither was able to beat Charlie’s winning drag.
With the final event in the record books and the all points accumulate by the drivers over the past five days tallied up, All competitors, crews, staff, and sponsors, gathered in a ballroom of the Denver Marriot West hotel for the Diesel Power Challenge 2017 Presented by XDP awards banquet, which was emceed by Diesel Power editor (and the main man behind DPC2017), KJ Jones. After graciously thanking all of the sponsors and everyone involved in making the event happen, KJ announced the winners’ names.
Driver’s Choice (competitors vote on a truck they would like to take home) was the first award of the evening and it went to Tim Jahn. Rich Strube won the Distance Award for his 1,813-mile trek from Hicksville, New York, and McCoy Black was next up to receive the Carnage Award for melting pistons in his truck’s 12-valve 5.9L Cummins powerplant. Mike Bunkelman’s ability to get around the Trailer-Tow Obstacle Course with no penalties in the fastest time earned him the Driver Skill Award. 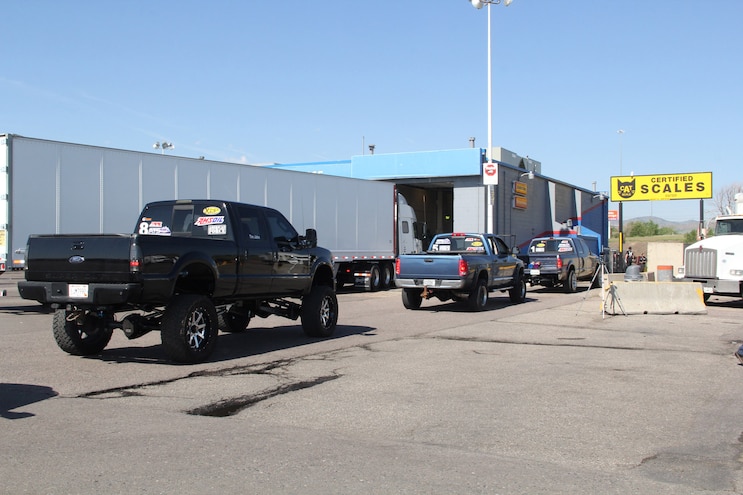 View Photo Gallery | 16 Photos
Photo 2/16   |   Competitors wait in line to do the required weigh-in at the truck scales on the way to the sled pull at Bandimere Speedway.
After the specialty awards were presented and pictures were taken, KJ moved on to the presentation of the First, Second and Third Place trophies. Squeezing out Third by only tenths of a point was Tim Jahn. Patrick Whitcomb’s consistency earned him a very solid Second Place win. And, for the second year in a row, Charlie Keeter is the overall champion. He was presented with the First Place trophy, and a check for $2,000 from Amsoil. Tim, Patrick, and Charlie’s wins made it an all-Ford podium finish for Diesel Power Challenge 2017 Presented by XDP.
Winning Diesel Power Challenge is no easy task, and to do it twice is even harder. The bittersweet thing about Charlie’s victory is the fact that as a two-time champion, he can no longer compete in DPC. So, for 2018, there will be a field of 10 new competitors. 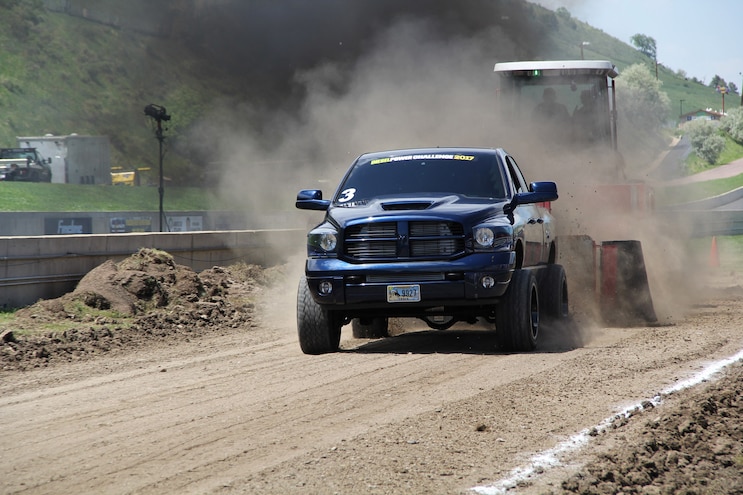 View Photo Gallery | 16 Photos
Photo 4/16   |   With the pedal pinned to the floorboard, Levi Krech tries to get the sled all the way down the track. 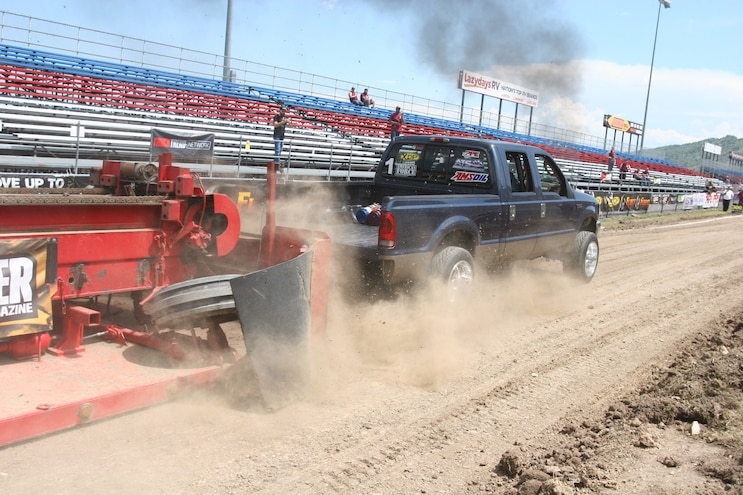 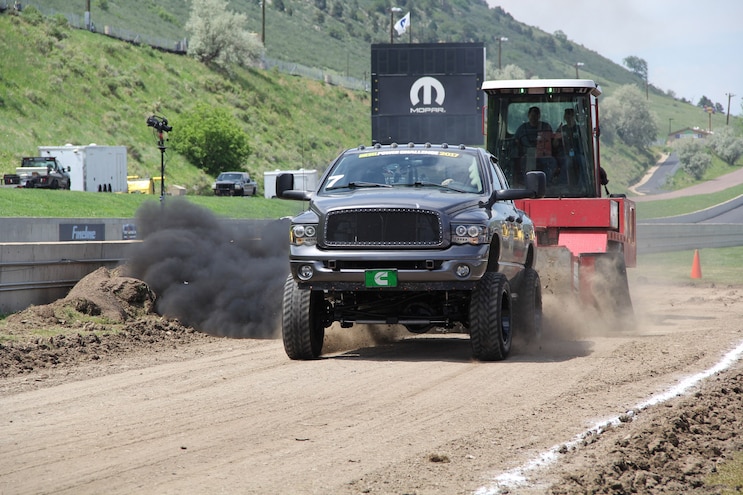 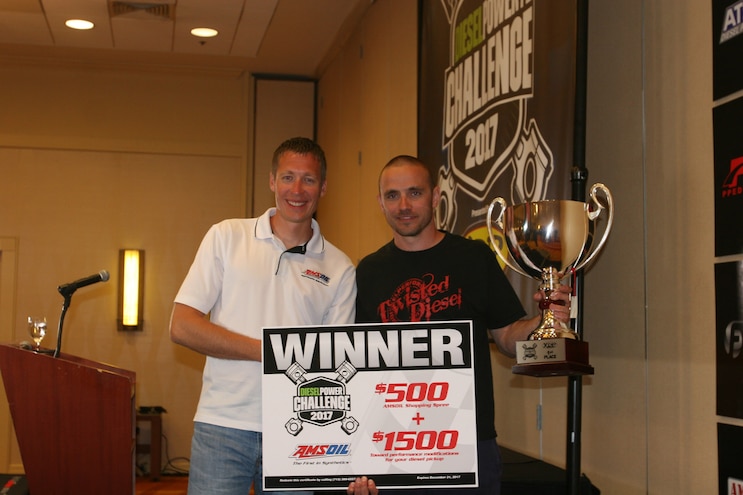 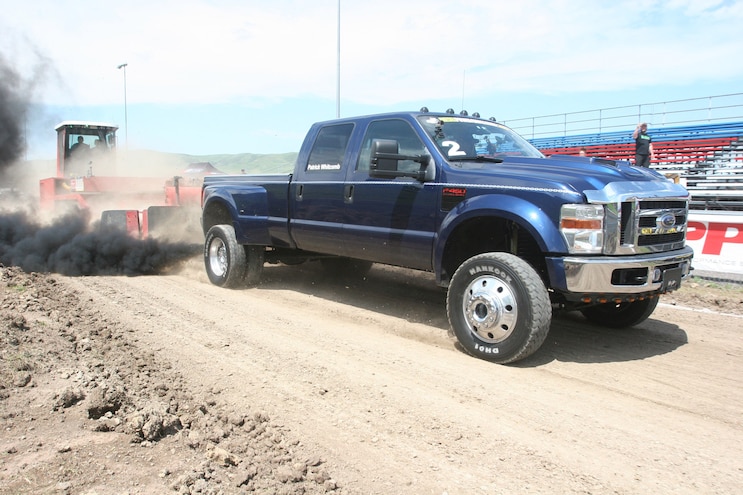 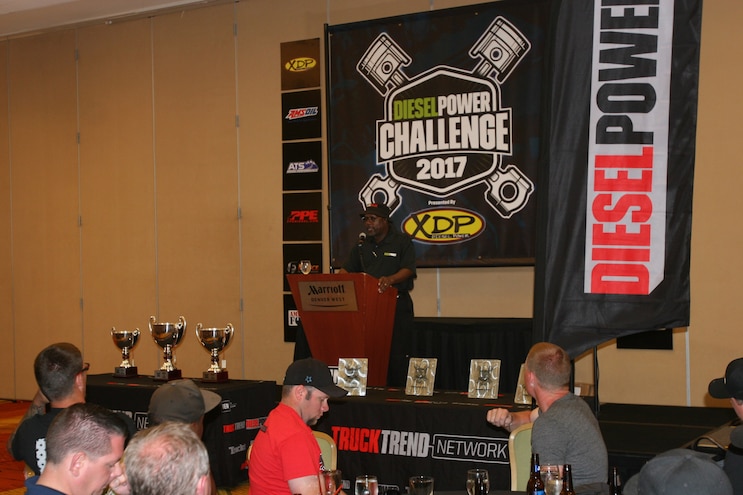 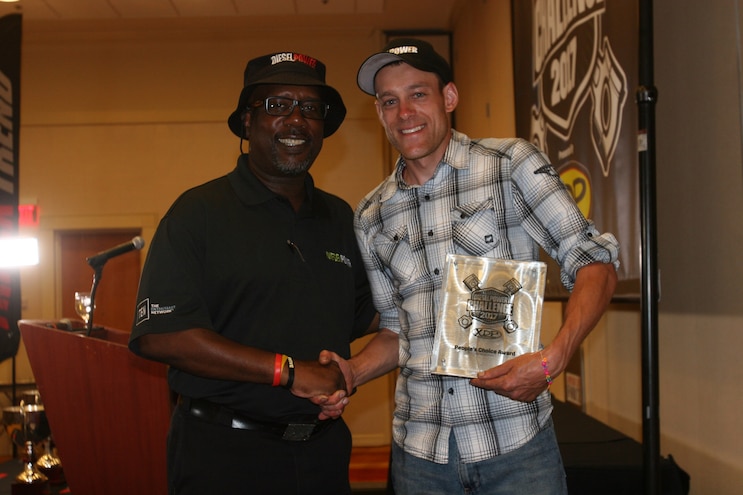 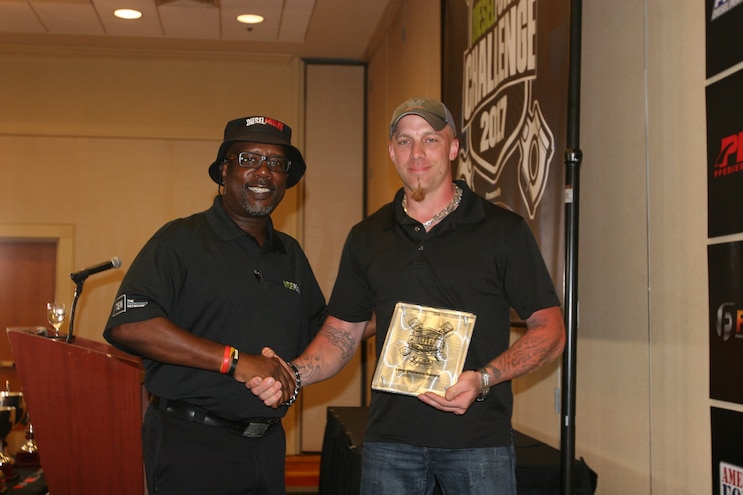 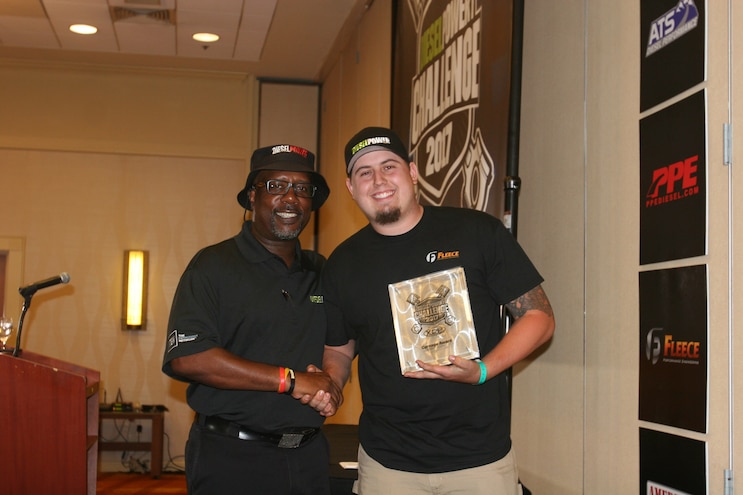 View Photo Gallery | 16 Photos
Photo 12/16   |   Possibly the most costly award of the evening, the Carnage Award, is happily accepted by McCoy Black. 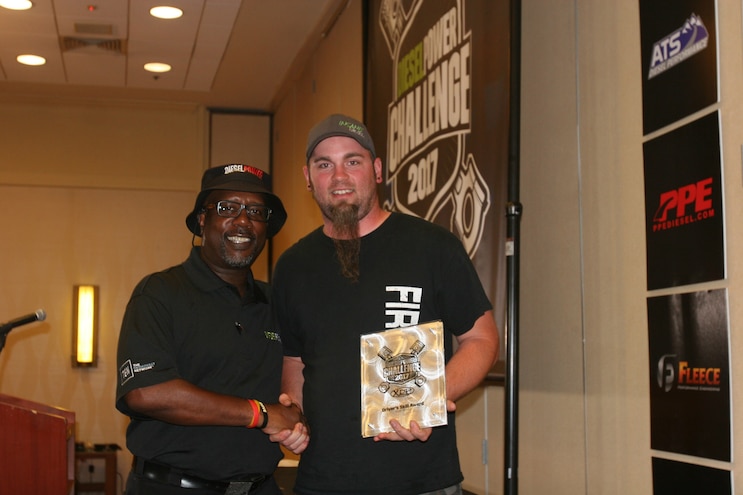 View Photo Gallery | 16 Photos
Photo 13/16   |   The Driver Skill Award was well earned by Mike Bunkelman on the Trailer-Tow Obstacle Course. Mike covered the entire circuit in 1:38, without ANY penalties. 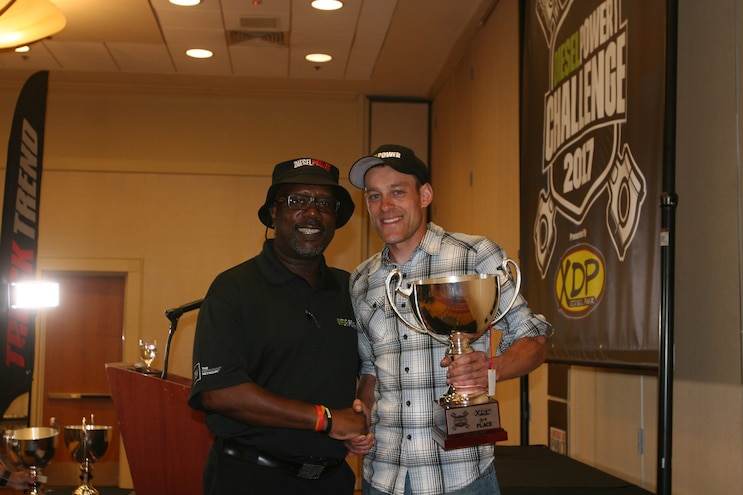 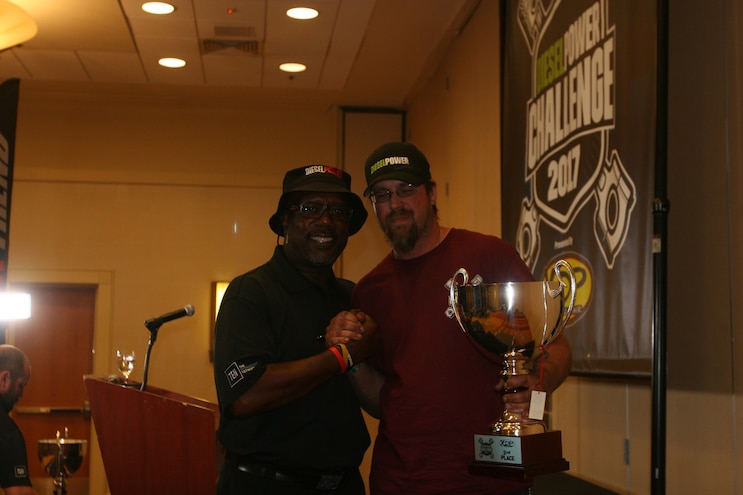 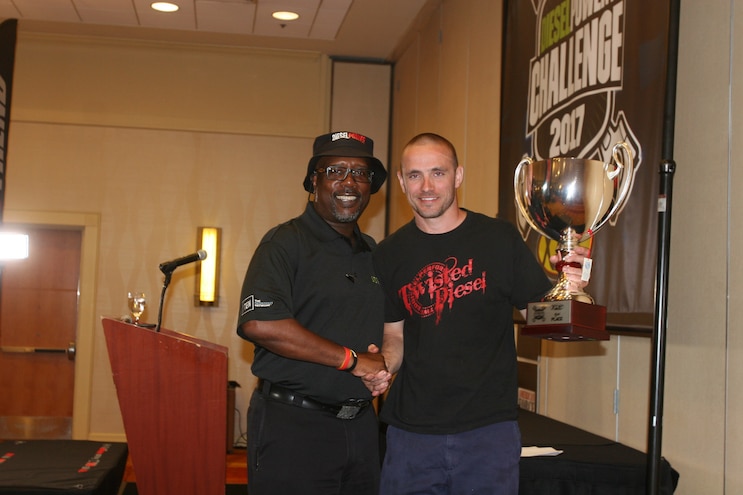