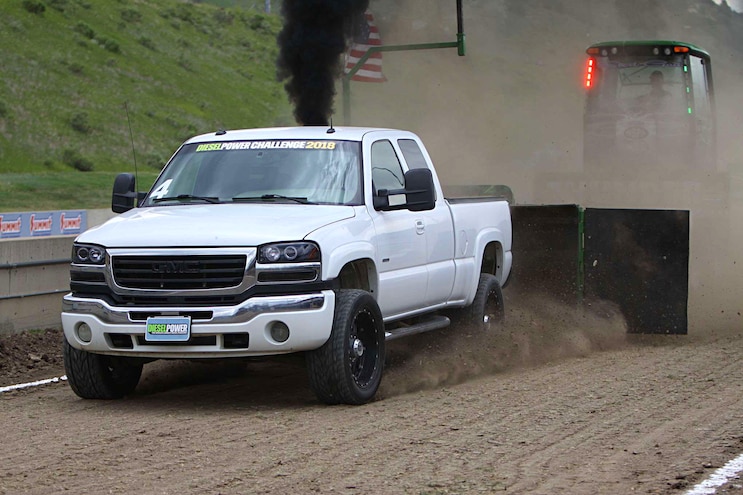 Typically, by the time we reach the last day of competition at Diesel Power Challenge presented by XDP, the number of trucks that are still in competition has dwindled at least by a few due to mechanical issues. However, the tradition was broken in 2018, as we went into the final event, the sled pull, with all nine trucks that started DPC ready to battle it out.
Despite the full roster, plenty of carnage occurred along the way. During Day 4’s drag-race qualifying, the pump in Garrett Osen’s transmission broke, which kept Garrett and his ’10 Ford F-350 from finishing that segment. His team did not let the breakage discourage them from continuing. Within three hours they removed, dismantled and replaced the broken part, and then put everything back together in time to run through the Trailer-Tow Cone Course and ultimately compete in the sled pull.
Coming into the final day, none of the participants had any clear points advantage. Each team was ready to give its all to earn as many points that were possible on the final day of competition. After stopping by the CAT scales to weigh in, all of the participants drove as a group to Bandimere Speedway in Morrison, Colorado, to see how well their truck could do against the Sulley and Sons sled.
The first to hook was Trae Hutton in his Duramax-powered ’03 GMC Sierra 2500HD his first time sled pulling.) Trae did not hesitate to put the hammer down, throw some dirt, and drag the sled well past the 300-foot mark and into the grass far beyond the end of the track. After it was determined that the sled’s weight box malfunctioned, the sled was reset and the problem corrected. Trae then hooked again and pulled to the 282.01-foot mark to set a strong opening distance. 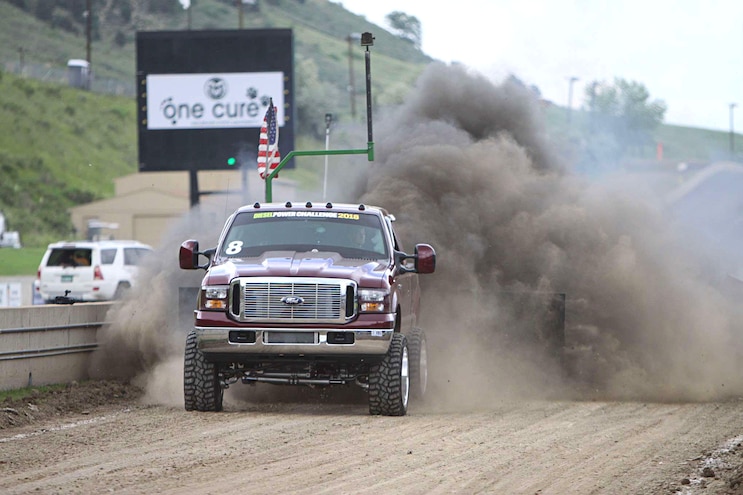 View Photo Gallery | 285 Photos
Photo 2/285   |   2018 Diesel Power Challenge Sled Pull
Second up to the starting line was Shayne Merriman in his ’74 Ford. Shayne’s Cummins-motivated F-250 pulled the sled 243.02 feet. Next up was Allan Burk, who pushed his Chevrolet Silverado 2500HD to a distance of 237.01 feet, but was unable to eclipse the first two pulls. With the bar set and five rigs in line behind him, Travis Richards did not hesitate to throttle up his big stick-shift ’07 Dodge Ram 2500 and drag sled to a new high mark of 312.0 feet.
Andrew Morrison took his turn on the dirt and made a 177.10 foot run. Kodi Koch (196.09 feet) and Kody Pulliam (267.02 feet) both put the hammer down on their individual Chevrolets but neither was able to overtake Travis’ distance. Kody, pushing his Silverado for everything it had, ended up with an engine knock. Garrett took the sled 303.08 feet down track which garnered him the second place position. Saving DPC’s worst carnage for the very end, Zach Scoles made the last pull of the day, and during a no-holds-barred attempt to take the lead, his ’04 F-250”s rear axle housing had other ideas when the center section broke away from the axle tubes and twisted skyward, stopping him at the 193-foot mark.
After all the dust settled, it was then time for the Diesel Power staff to sit down and tally up all the numbers and information that was gathered for all of the week’s activities.
The Diesel Power Challenge Awards Banquet was held later that evening in the Marriott Denver West hotel (the host property for DPC). Diesel Power Editor KJ Jones made remarks to recognize and thank everyone that had a part in putting on the event and making it one of the best DPCs ever, KJ had the winners from each individual category (Fuel Consumption, Dyno, Drag Racing, etc.) stand up so they could be recognized for their achievement. He then announced and awarded the recipients of the specialty awards.
The specialty awards are designed to recognize the drivers who had the worst carnage, drove the longest distance, showed superb skill, and a nod to the truck that is the unanimous drivers’ choice. Zach Scoles received the Carnage Award, for the destruction of his rear axle and driveshaft in the sled pull. For covering the most miles getting to Denver from his home in Salisbury, North Carolina, Andrew Morrison won the Long Distance Award. Driver’s Skill Award went to Shayne Merriman for his perfect maneuvering (no penalties) of the Trailer-Tow Cone Course and overall driving skill shown throughout the event. The drivers themselves chose the final specialty award for the truck they liked best, the Drivers’ Choice Award, which went to Trey Hutton’s ’03 GMC Sierra.
Then it finally was time to announce the top three competitors for Diesel Power Challenge 2018 Presented by XDP. The Third Place trophy was awarded to Trae Hutton who had a combined score from all the segments of 393.9 points. Next, it was Garrett Osen’s turn to approach the stage and collect the Second Place cup for his combined score of 414.1 points. As the anticipation started to grow, KJ finally announced the First Place winner, Kody Pulliam. Kody amassed a total of 492.9 point to take home the trophy and earn a spot in Diesel Power Challenge 2019 as the returning champion. 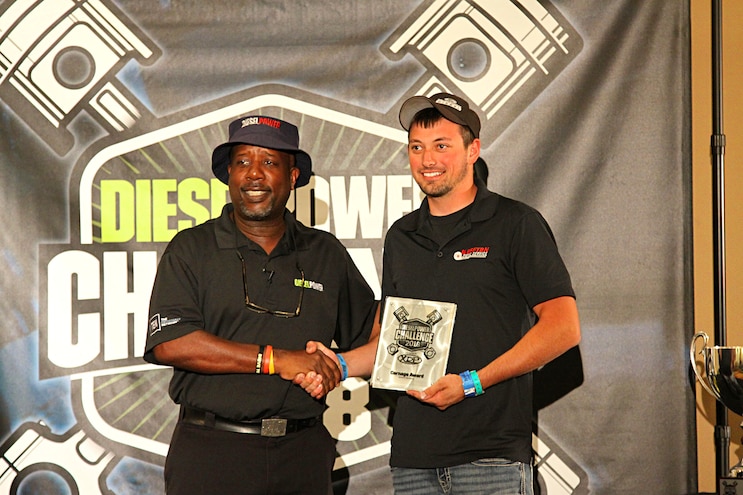 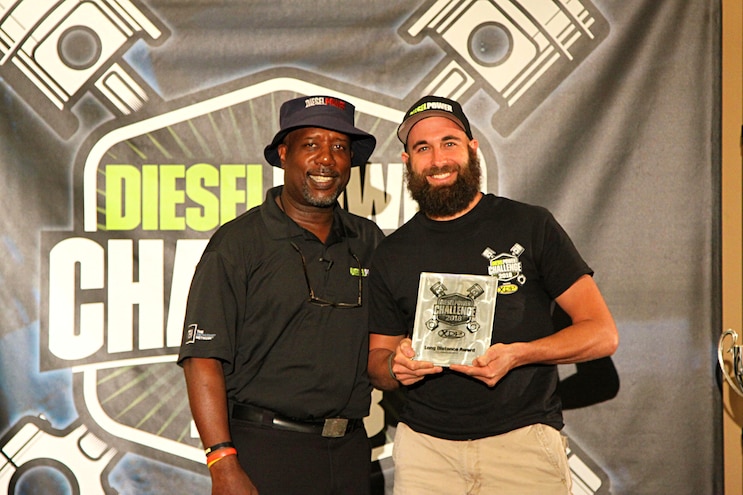 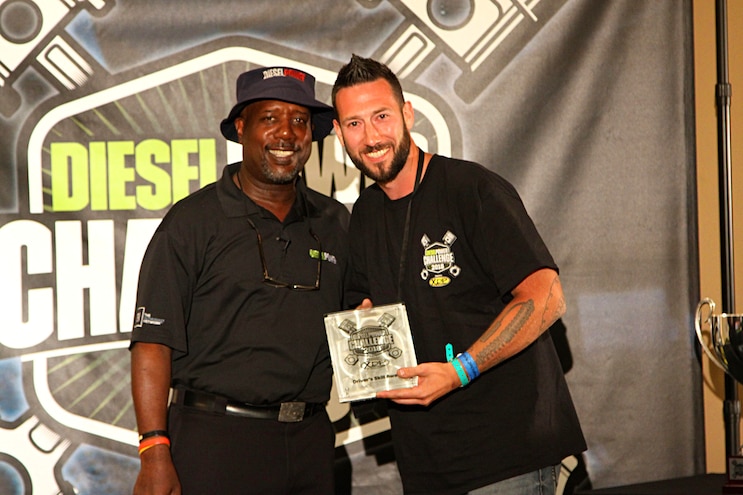 View Photo Gallery | 285 Photos
Photo 5/285   |   The Driver’s Skill Award went to Shayne Merriman for his superb handling of the Trailer-Tow Cone Course and overall skill shown throughout the event. 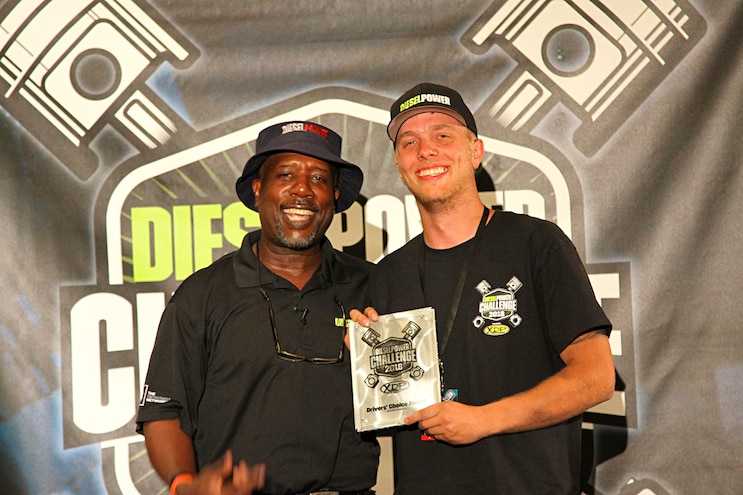 View Photo Gallery | 285 Photos
Photo 6/285   |   All the drivers voted and they agreed that Trae Hutton’s white GMC is the truck they would like to take home. Trae receives the Drivers’ Choice Award from KJ Jones. 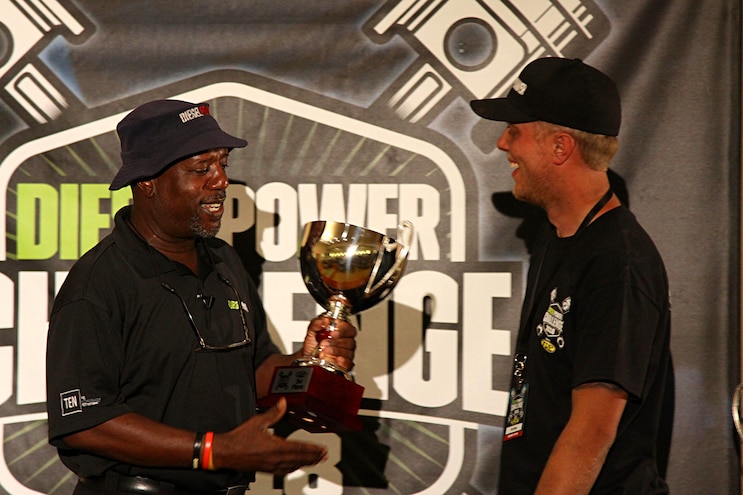 View Photo Gallery | 285 Photos
Photo 7/285   |   Trae had barely sat back in his seat after receiving his Drivers’ Choice Award before he returned to the stage to accept his well-earned Third Place trophy. 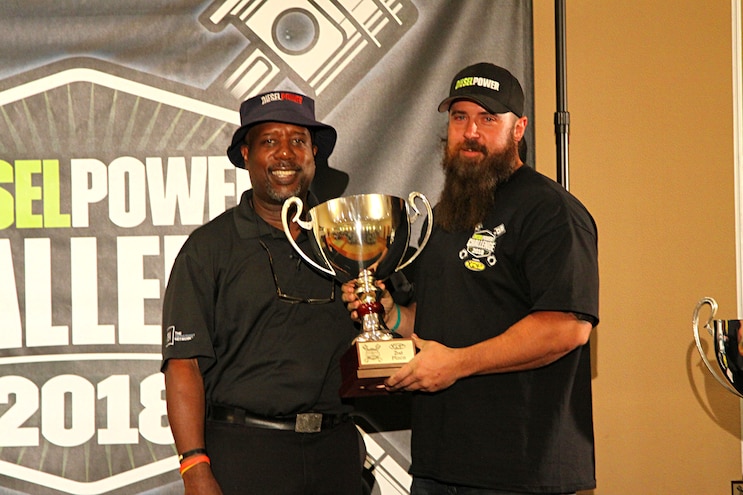 View Photo Gallery | 285 Photos
Photo 9/285   |   After being offered the alternate spot for Diesel Power Challenge 2018 presented by XDP, Garrett Osen took the chance and showed up even though he may have been a benchwarmer for the entire competition. His choice paid off with a Second Place finish. 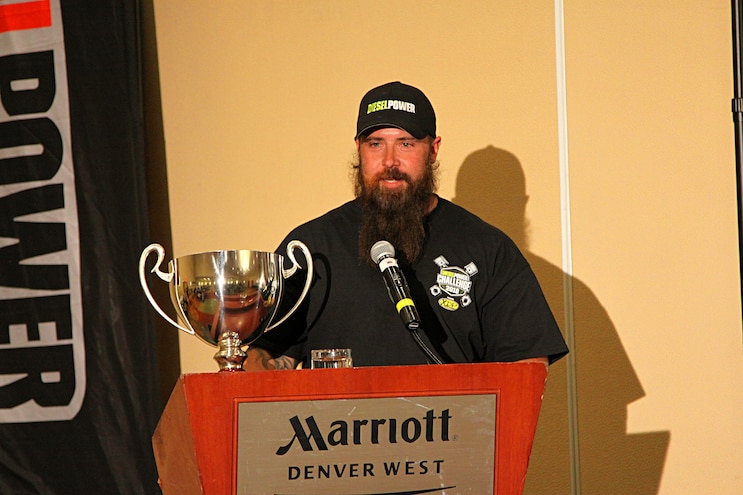 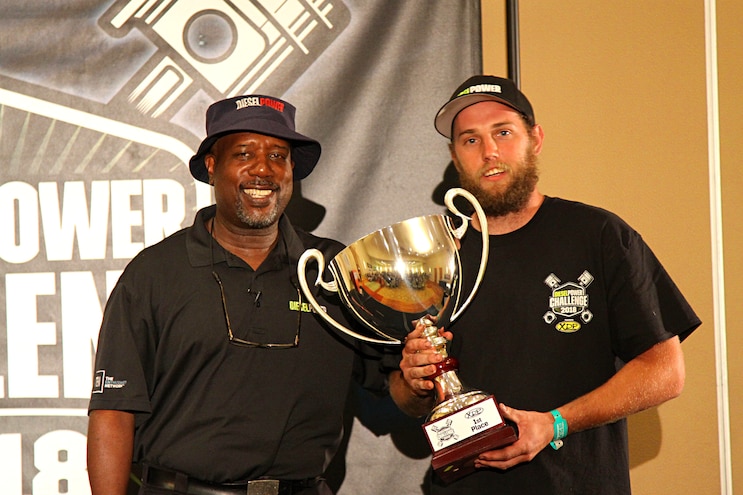 View Photo Gallery | 285 Photos
Photo 11/285   |   And the man of the hour is Kody Pulliam, whose consistent performance throughout the entire competition acquired him the points needed to capture First Place and a guaranteed spot in Diesel Power Challenge 2019. 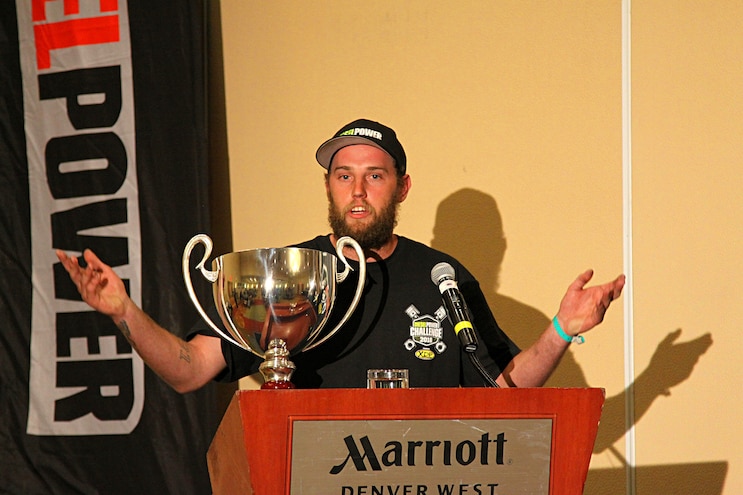 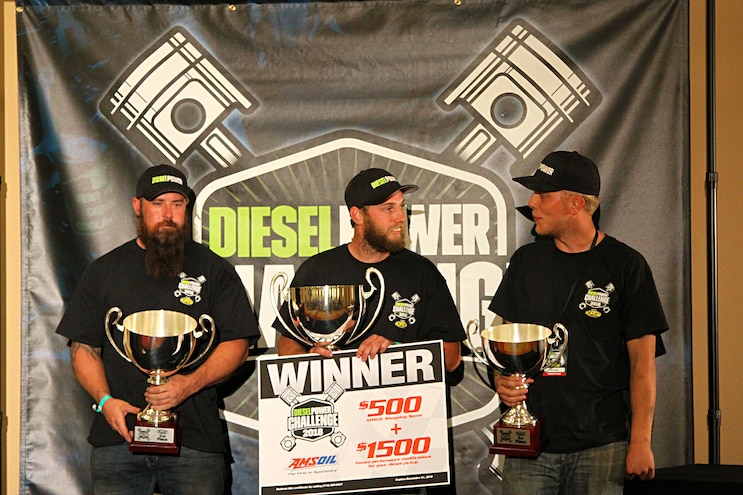 View Photo Gallery | 285 Photos
Photo 13/285   |   The winners of Diesel Power Challenge 2018 Presented by XDP posed in front of the banner for the crowd and the cameras. Kody also received an award from Amsoil for his first-place finish. All three winners received prizes from first-year DPC sponsor Mychanic for their achievements.