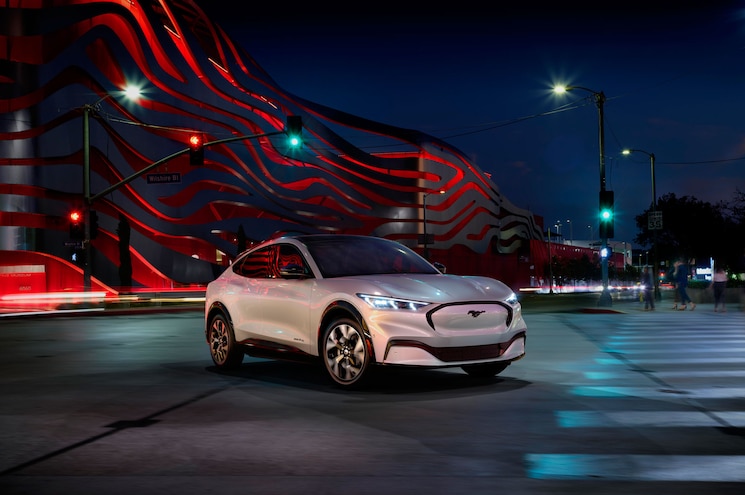 The "Mustang-inspired" electric crossover that Ford has been touting for years now has arrived, and inspiration doesn't seem to be the right word. Instead, the 2021 Ford Mustang Mach-E seems to be a direct descendant, not the result of inspiration, of the company's storied pony car. 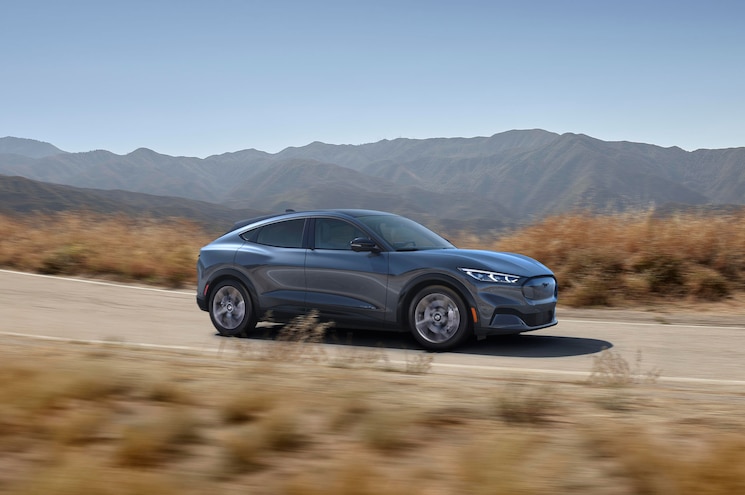 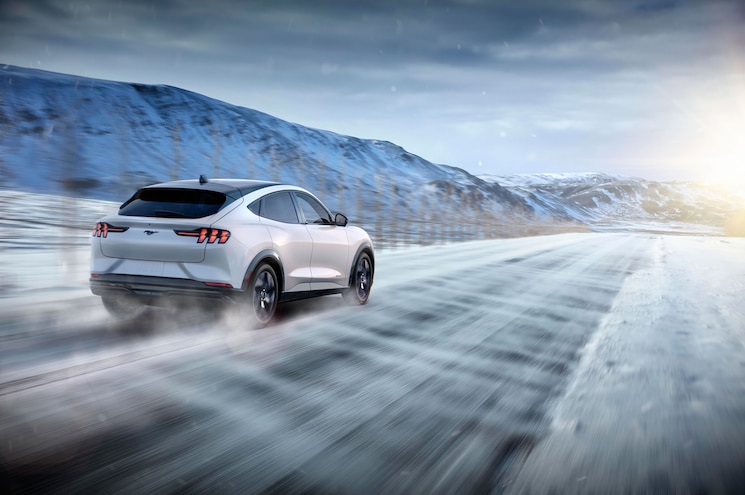 Arriving in showrooms late next year, the Mustang Mach-E takes a relatively familiar shape, with a chamfered front grille element and slim, peering headlights. It's possible the Mach-E's styling was inspired in part by the fastback and Sportsroof Mustangs of the 1960s and 1970s, but its sloping roofline is more likely a reaction to the popularity of "coupe SUVs" like the BMW X6 and forthcoming Infiniti QX55. However, there's no denying some Mustang DNA in the styling, including swelling rear haunches, a relatively long front hood, three-element vertical taillights, and the wild-horse logo centered between the headlamps. 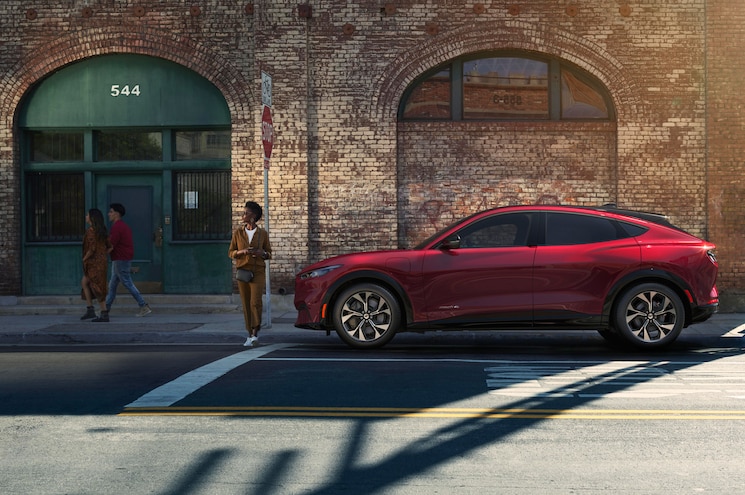 However, viewed in profile, the Mustang Mach-E looks far less sporty than its heritage name would suggest. The roofline is far too tall and the rear overhang far too short, giving it a turtle-shell appearance and suggesting a front-wheel-drive platform. It looks less like a sporty SUV than BMW's oddly shaped 6 Series Gran Turismo, not exactly the comparison you want from something bearing such an important Ford nameplate. 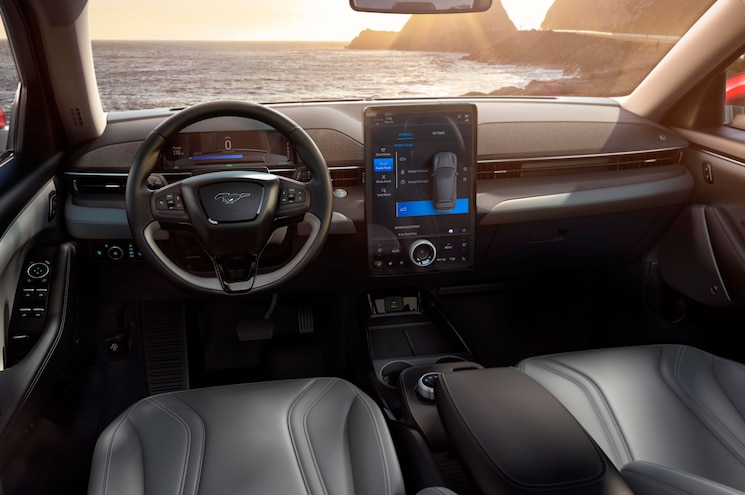 Inside, Ford designers have created a nicely modern place to spend time, with a twin-cowl dashboard that recalls just about every previous Mustang save the Fox-body and the Mustang II. The double humps here provide a backdrop for a slick, available B&O speaker system, arranged like a soundbar. There's also an unusual gauge display, which rests in a flat, freestanding screen jutting out from above the steering column. A double-barrel gauge display would have been more Mustang-appropriate. However, Ford's design is much more intuitive in the Mustang Mach-E than Tesla's is in the Model 3, which lacks a driver-centric gauge display at all. 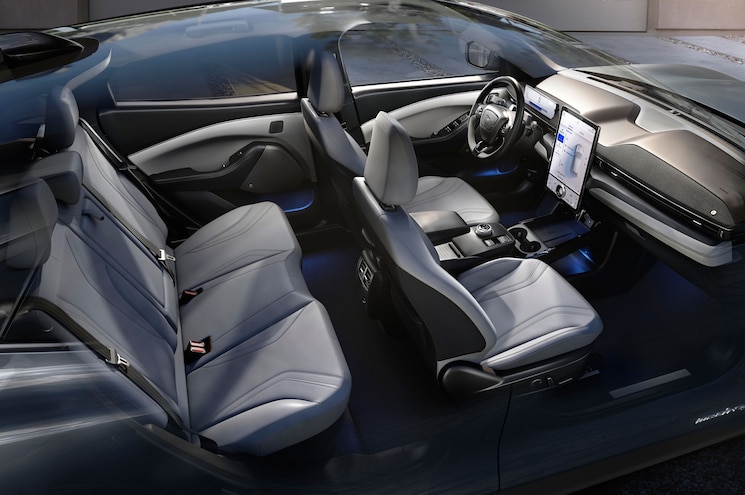 Speaking of the Model 3, it's hard not to draw comparisons between the two in terms of interior design. Both feature a sparse dashboard fascia and horizontal HVAC outlets, and both get centrally located, floating infotainment touchscreens. The Mustang Mach-E looks more Ford-ish thanks to the twin-cowl design and intuitive secondary controls, but we bet Ford engineers would be hard-pressed to claim they didn't take some inspiration from Tesla's cheapest vehicle. 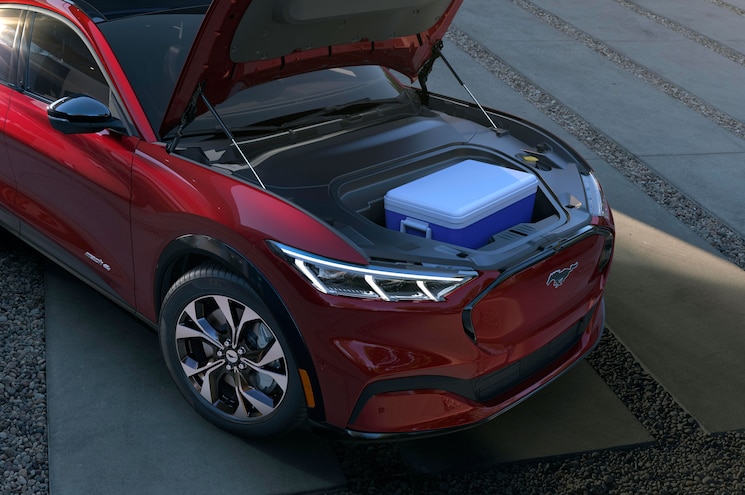 The Mach-E's electric platform, which bundles batteries and motors together in the bottom of the chassis like a skateboard, opens up plenty of passenger and cargo room. Ford claims 29 cubic feet of space behind the rear seats, opening up to 59.6 cubes with them folded. What's more, under the "hood" lies a water-resistant, drainable front cargo bin that measures 4.8 cubic feet, large enough for a soft carryon duffel bag. Since it's drainable, it could also be filled with ice and turned into a mobile cooler for long road trips and Saturday afternoon family soccer tournaments. 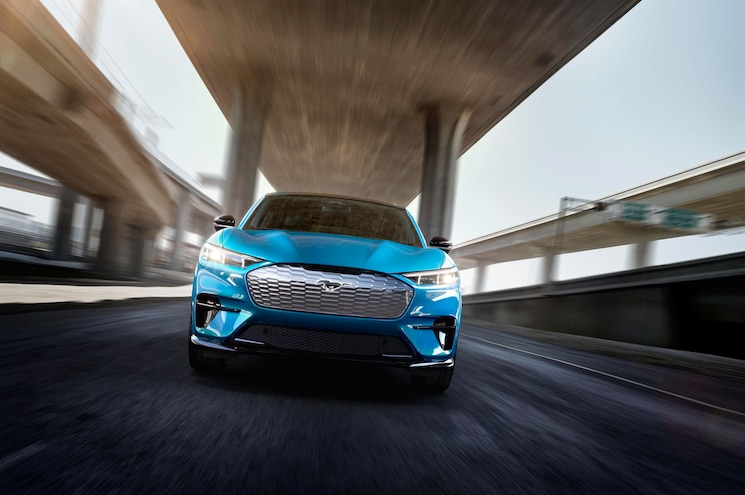 Being a Mustang, Ford had better make darn sure the Mach-E performs, and their claimed specifications are promising. The crossover will be available in five different powertrain specifications: standard-range and extended-range, both available in rear- or all-wheel drive, as well as a high-power, extended-range all-wheel-drive version specific to the Mustang Mach-E GT model. 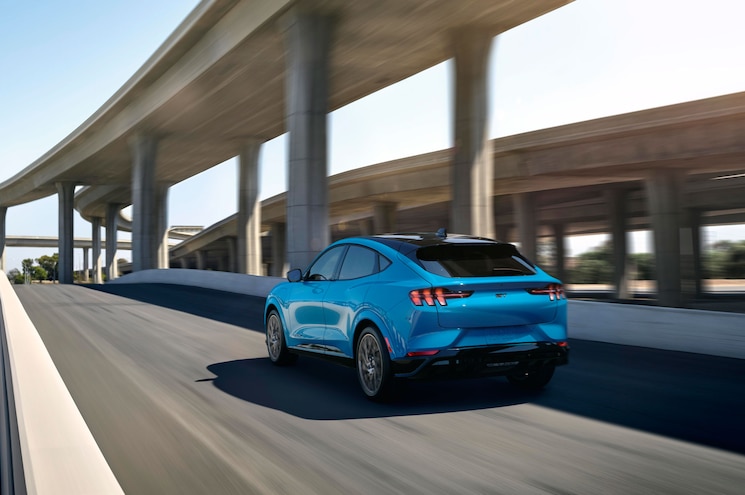 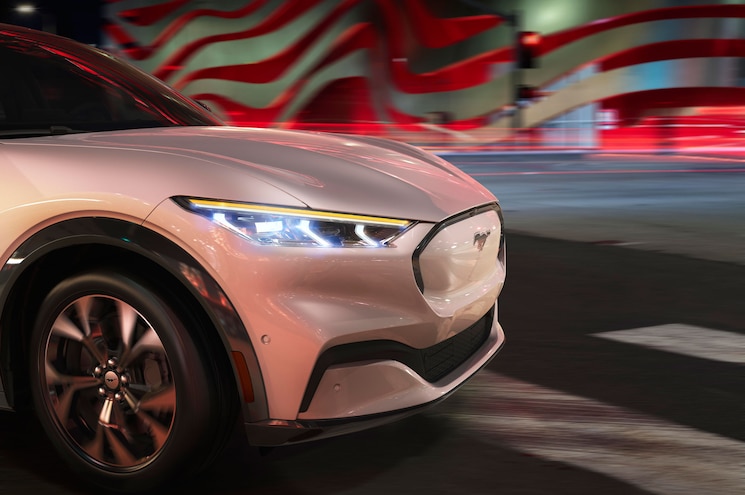 Both the base and extended-range batteries are good for a 0-60 sprint in the mid-five to low-six-second range, according to Ford. The Mach-E GT, however, should properly hustle, with the mile-a-minute mark passing in less than four seconds, matching Ford's claim for even the top-dog Mustang variant, the supercharged 2020 Shelby GT500. Tesla claims faster acceleration from its Model 3 Performance, although that similarly priced vehicle is nonetheless quite a bit smaller than the Mustang Mach-E.

Living in the Future 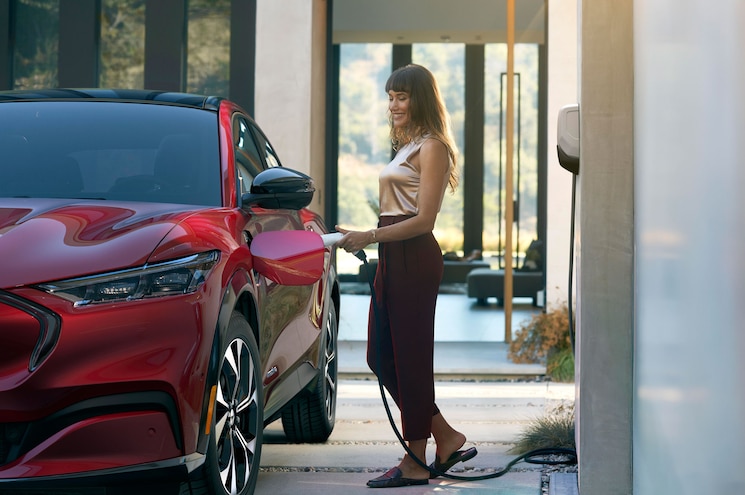 Ford promises adjusting to the Mustang Mach-E will be easy. The company will partner with Amazon Home to help owners find qualified electricians to install in-garage Ford Connected Charging stations using 240V power. These at-home chargers can provide an estimated 32 miles of range per hour of charging. Meanwhile, the included mobile charger can add 22 miles of range per hour, also using 240V power.

And with access to the FordPass Charging Network, owners can find various charging stations along their route, including DC fast chargers that can restore about 47 miles of range in 10 minutes, or 80 percent of the standard-capacity battery's range in about 40 minutes. That's not quite as convenient as stopping at the local service station for a quick splash-and-go, but it should ease Mustang customers into EV motoring, particularly if all they're doing is commuting to and from work. 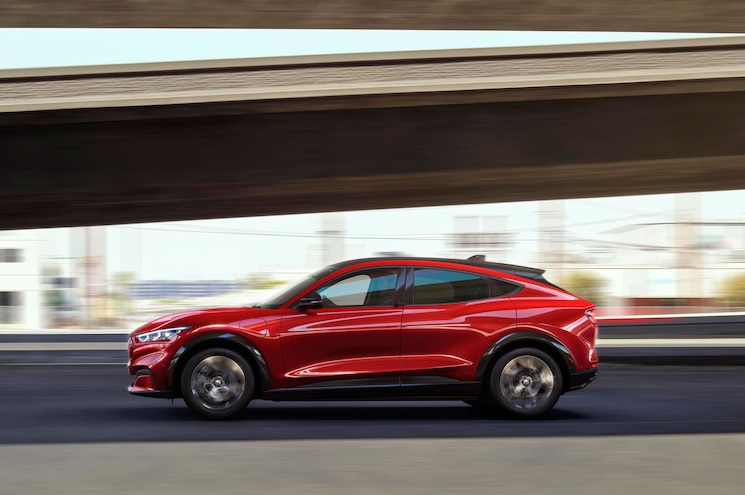 According to Ford's consumer website, the Mustang Mach-E will have an estimated starting price of $43,895 for the base Select trim level, rising to $50,600 for the Premium. The EV will also be available in a California Rt. 1 Edition, which is uniquely equipped for maximum range with aerodynamic wheel inserts and the larger battery, confined to rear-wheel drive only and costing about $52,400. At the top of the range will be the Mustang Mach-E GT, which will start at $60,500. There will also be a limited-availability First Edition, which will cost just under $60,000 when it arrives in customers' hands at the end of 2020.

Those prices roughly match other long-range electric vehicles, slotting in above the Chevrolet Bolt, Kia Niro, and Hyundai Kona but offering more interior room (at the expense of EV range). The base Mustang Mach-E also costs a bit more than the Tesla Model 3, but again, it's a larger, more spacious vehicle. We presume the forthcoming Model Y crossover will be the Mach-E's most natural competitor. 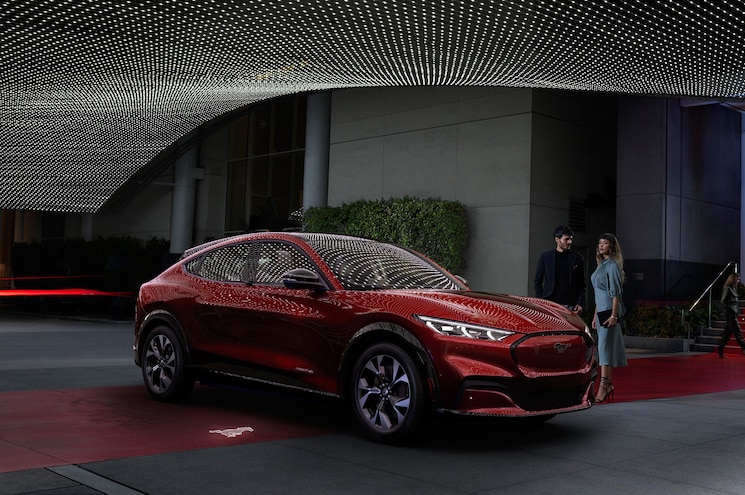 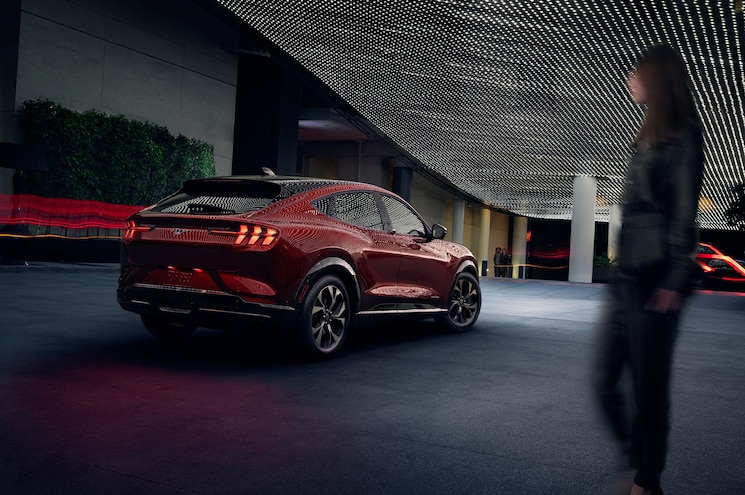 The First Edition and Premium trims will be the first to go on sale, with deliveries estimated to begin in late 2020. The Select and California Rt. 1 will follow early in 2021, with the GT arriving later that spring. 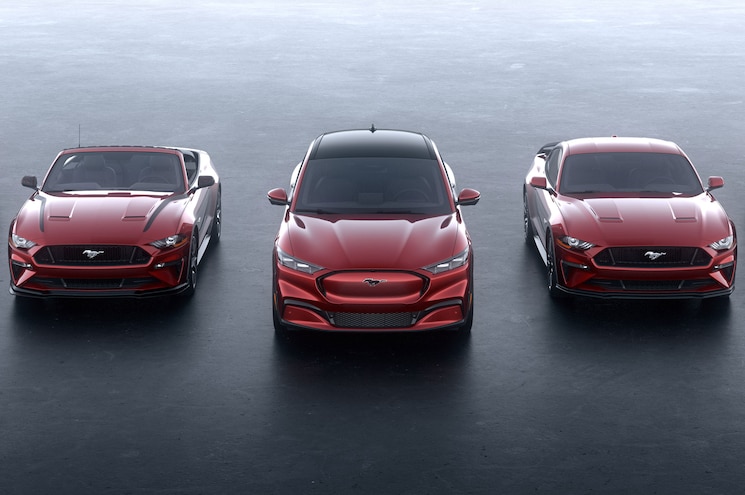 Whether the Mach-E is deserving of the storied Mustang name is still up for debate. In terms of performance, it's a decent Mustang facsimile, offering impressive acceleration, available all-wheel-drive traction, and what we presume will be decent handling thanks to a low center of gravity. But can a Mustang really take the shape of a crossover, and an EV at that? We're not so sure. Nevertheless, Ford will probably sell a ton of them, and that's because it will probably be a decent all-around machine, its name notwithstanding.