Indianapolis Welcomes the NTEA and Its Very Cool Trucks 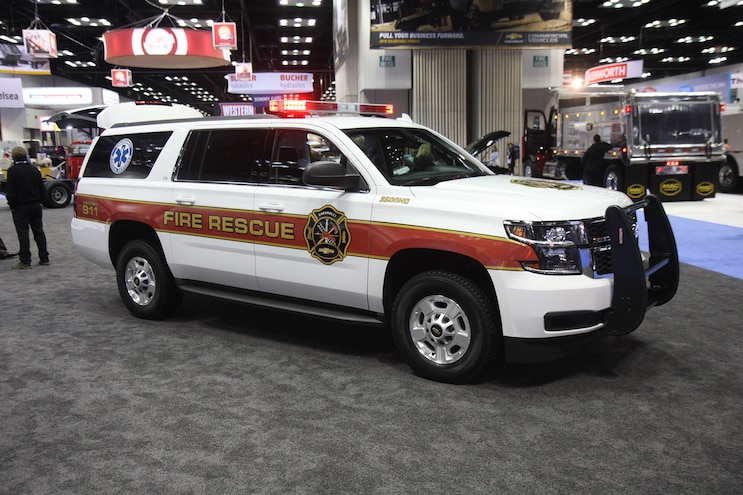 One year ago, the National Truck Equipment Association (NTEA) Work Truck Show set records for total attendance. That record lasted…exactly one year. With 11,905 industry professionals in attendance, more people took advantage of the Indiana Convention Center’s hospitality this year than ever before.
That friendliness was in full swing throughout Indianapolis as well, with a variety of events around the city tailor-made for NTEA members and Work Truck Show attendees. Those perks included the WTS Blues Bash at the famous Slippery Noodle Inn, featuring the Jeremiah Johnson Band. Great blues music and fried food made the event difficult to pass up.
Guests at the Work Truck Show included Reuben Sarkar, deputy assistant secretary for transportation at the U.S. Department of Energy, who also gave the keynote address at the NTEA Green Truck Summit. Making an appearance as the headliner at the President’s Breakfast was none other than Jay Leno, the late-night TV juggernaut whose love of vehicles is well documented. His remarks were hilarious and insightful, and he knew he was talking to fellow enthusiasts when he joked about his personal fleet and how much work it took to keep all those cars and trucks in good shape.
As with last year, attendees to the show hailed from all 50 states, 8 Canadian provinces, and more than 12 countries. The show floor was open for four days, allowing each visitor to appreciate the wares of hundreds of vendors, including OEMs like Ford, Chevrolet, Nissan, Ram, and GMC, as well as medium- and heavy-duty manufacturers like Mack, Kenworth, and International. Also on hand were vehicle upfitters and accessory companies, providing truck caps, snowplows, telematics systems, dump bodies, and literally thousands of other parts and products.
Making an appearance at this year’s show was the Work Truck Show Ride-and-Drive, which gave visitors the chance to drive or ride in a number of vehicles, including the Hino 195h hybrid cabover truck, Lightning Hybrids’ Ford E-450 hydraulic hybrid, and a variety of clean-diesel, gasoline, natural gas, and propane trucks. We got behind the wheel of several, and the future of green trucks is very good.
Coming home with a memory card full of photos, we’re gonna try and tell you everything you need to know about the 2016 Work Truck Show—and you can bet we’re counting down the time until the 2017 show March 14-17, 2017. 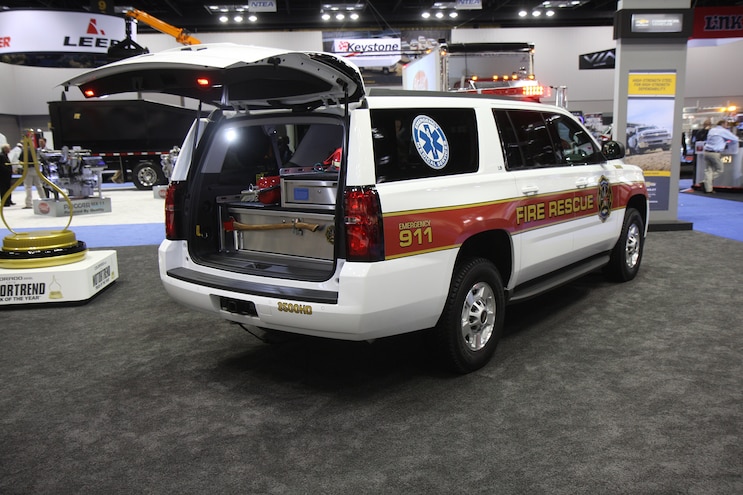 View Photo Gallery | 37 Photos
Photo 2/37   |   002 2016 NTEA Work Truck Show
If you want a 1-ton Chevrolet Suburban, better enlist at your local fire academy. This Suburban 3500 is proof that Chevrolet commercial vehicles don’t have to all be trucks, box vans, and cab chassis. With a well-organized interior and boyhood-dreams paintjob, it had us all jonesing for an eight-lug Suburban. 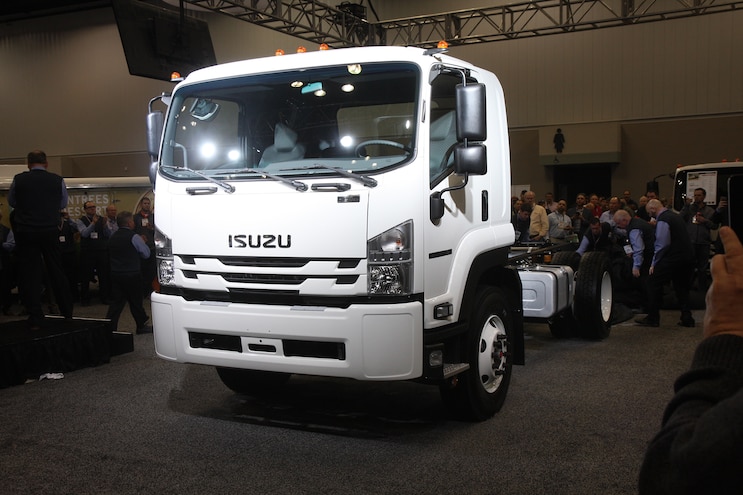 View Photo Gallery | 37 Photos
Photo 3/37   |   003 2016 NTEA Work Truck Show
Isuzu took center stage at the Work Truck Show, using the event as an opportunity to unveil the ’18 FTR Class 6 truck. The FTR’s 5.2L turbodiesel I-4 is a first in the segment, bringing new levels of fuel economy and clean emissions to the table. The low-cab-forward design is another Isuzu staple, and the company claims it’ll be more maneuverable than its competitors. 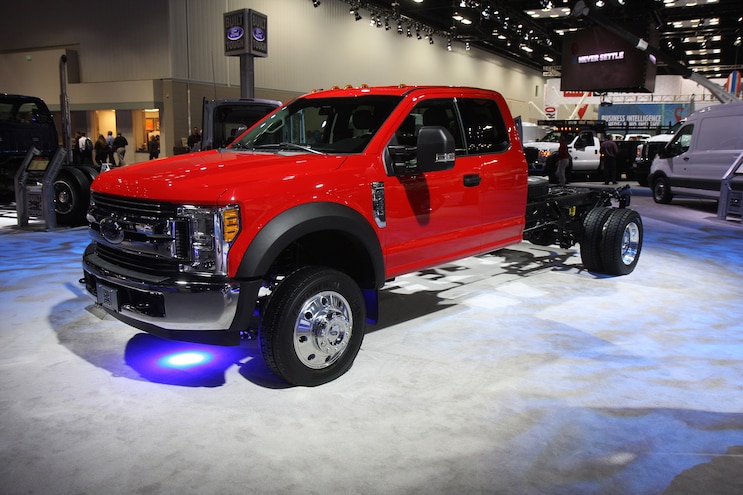 View Photo Gallery | 37 Photos
Photo 4/37   |   004 2016 NTEA Work Truck Show
The Ford F-Series Super Duty chassis cab was revealed at the 2016 Work Truck Show, giving the heavy-duty pickup lineup a few more body configurations from which to choose. This SuperCab chassis would be a good match for family businesses, although most fleets will choose the regular cab.
This Altec crane-bodied ’17 Super Duty is one of the first applications of the truck’s new chassis cab. Another variation on the theme was the F-450 tow truck. During the course of the week, we saw the same group of 10-year-old kids stop to ogle the truck at least two or three times. 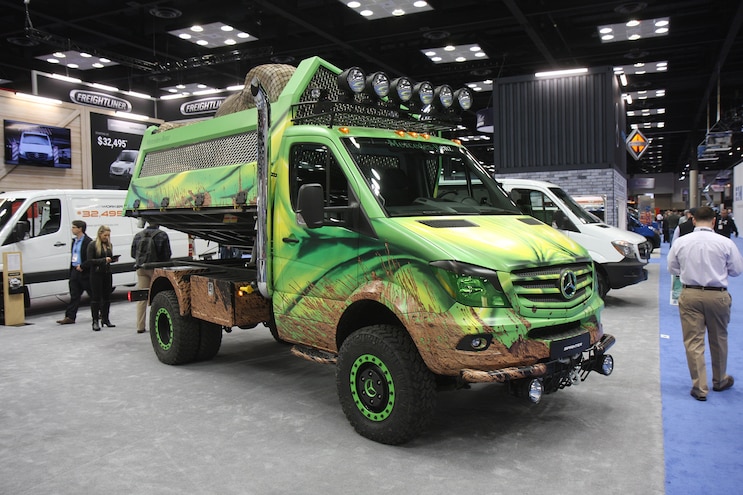 View Photo Gallery | 37 Photos
Photo 7/37   |   007 2016 NTEA Work Truck Show
Mercedes-Benz’s surprising proliferation of work trucks was on display, with this wild tilt-bed Sprinter being its centerpiece. Dual rear wheels, beadlocks, exhaust stacks, lizard-green headlights, and a faux-mud wrap job made this Benz even more ostentatious than those owned by the Kardashians. 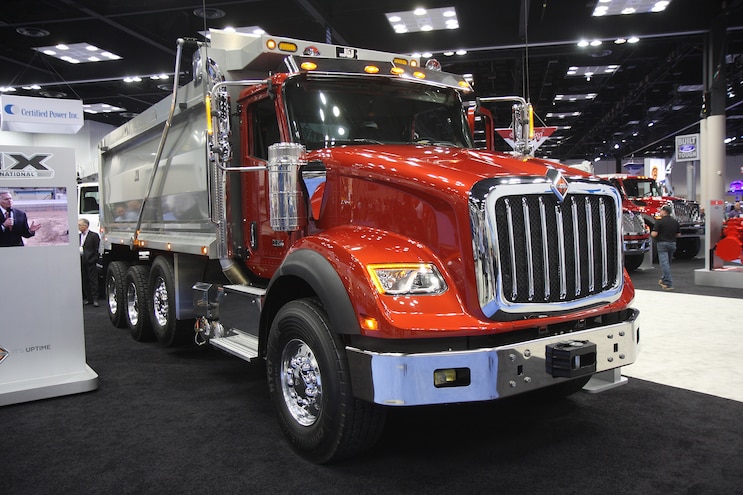 View Photo Gallery | 37 Photos
Photo 8/37   |   008 2016 NTEA Work Truck Show
The International HX-Series was another new-vehicle debut at the Work Truck Show. Available with either a set-forward or set-back front axle and two hood heights, the HX is designed to be International’s rugged-service truck, destined for foresting, concrete-mixing, and heavy hauling. Navistar and Cummins engines are on offer. 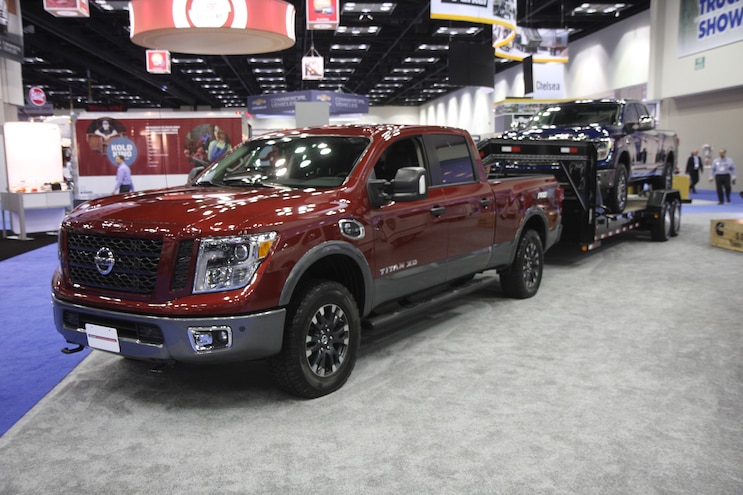 View Photo Gallery | 37 Photos
Photo 9/37   |   009 2016 NTEA Work Truck Show
No 2016 show circuit would be complete without an appearance by the Nissan Titan XD. This Pro-4X model is one of the hardest-working fullsize trucks on the market today, thanks in part to its 5.0L Cummins V-8.
The Work Truck Show’s primary focus is truck equipment. That much is apparent when inspecting this Masterack-modified Ford Transit Connect. A lockable file cabinet is mounted just inside the sliding door, while easily configurable drawers reside in the cargo bay. For plumbers, pest control technicians, and odd-jobs contractors, a setup like this is ideal.
Showing the flexibility of the work truck market, Isuzu treated attendees to two forms of frosty refreshment. Both the Red Bull and Schwann’s Isuzu NPR trucks were perpetually stocked with enough fuel to keep every guest riding a caffeine and sugar high.
One of the coolest vehicles at the show wasn’t the most obvious. This Western Star 4700SB was equipped with a massive Holland mobile welder, and the rail attachments mean this thing is ready to repair broken-down freight trains and train cars. Talk about a big job! 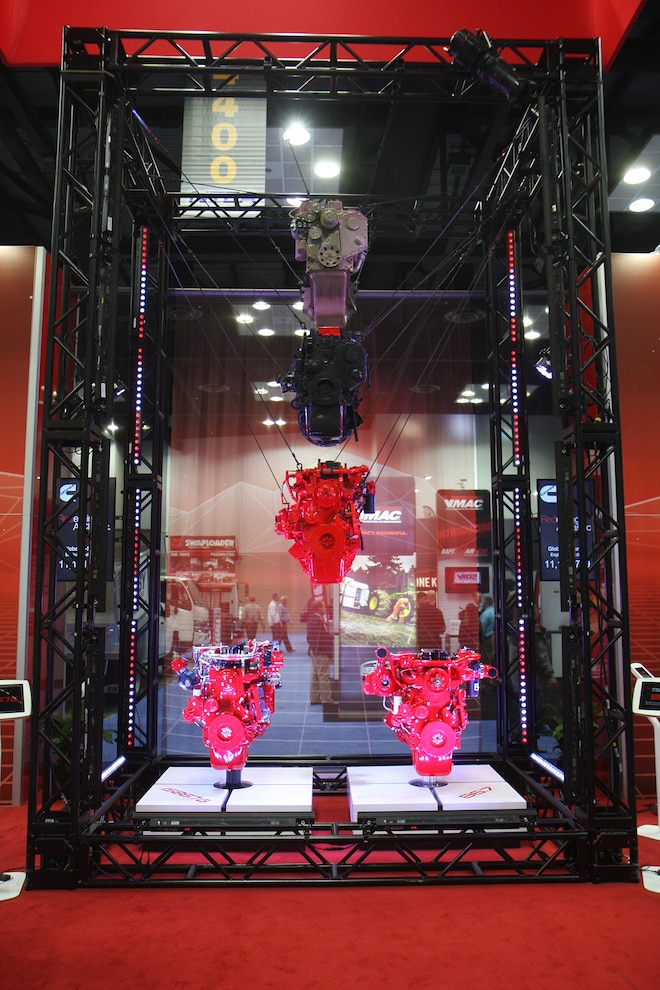 View Photo Gallery | 37 Photos
Photo 16/37   |   016 2016 NTEA Work Truck Show
Cummins had a very impressive display that showcased the hierarchy of its bread-and-butter engines. At the top of the heap was an example of the original 5.9L I-6 that appeared in the first Cummins-powered Dodge Ram, with the successive generations appearing underneath. 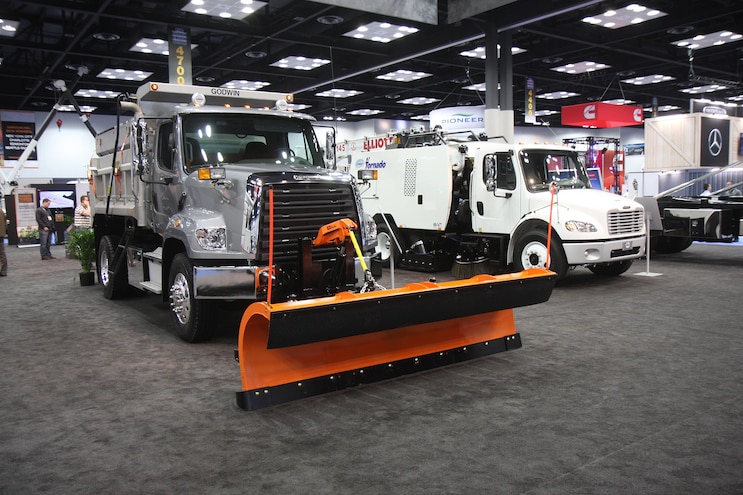 View Photo Gallery | 37 Photos
Photo 17/37   |   017 2016 NTEA Work Truck Show
Freightliner’s line of multipurpose trucks was represented in part by the popular M2 and severe-duty 108SD. There was also a Freightliner-badged Sprinter in the display, reminding us how closely linked the company is with Mercedes-Benz. 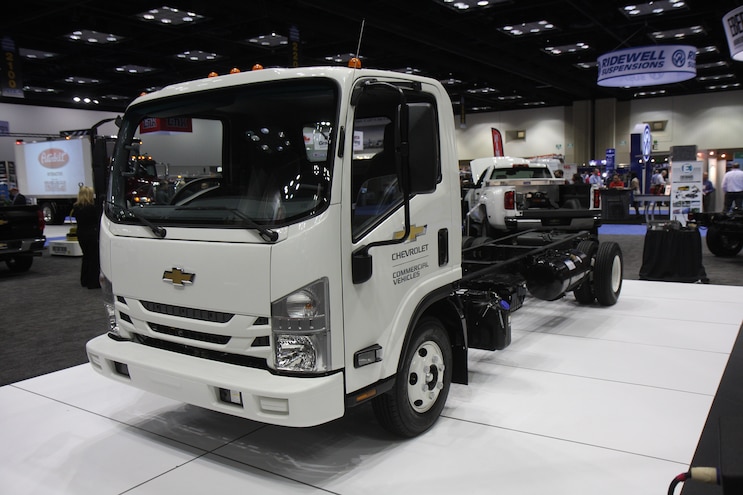 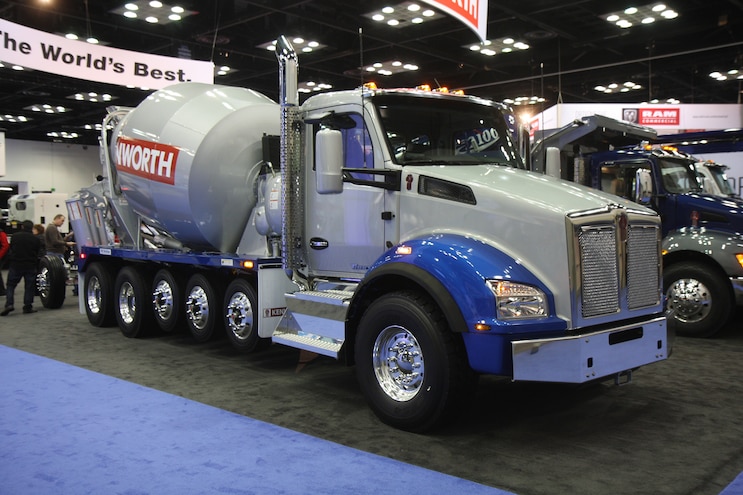 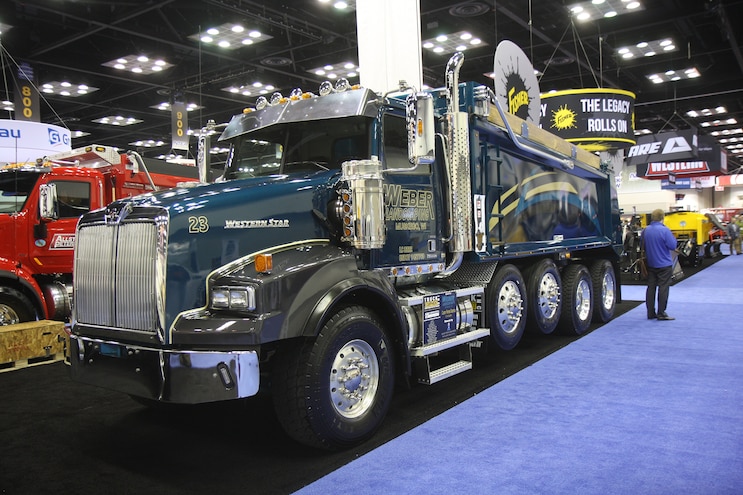 View Photo Gallery | 37 Photos
Photo 20/37   |   020 2016 NTEA Work Truck Show
This Western Star featured a Brandon Manufacturing body and one of the few truly custom paintjobs at the show. That’s because it’s a privately owned vehicle, operated by Weber Landscaping in Muskego, Wisconsin.
Since environmentally friendly trucks were a focus of this year’s show, the Mitsubishi Fuso Canter E-Cell showcased its all-electric, zero-emissions platform. A prototype that was tested by the city of Lisbon, Portugal, was also on hand to drive during the event’s Green Truck Ride-and-Drive. 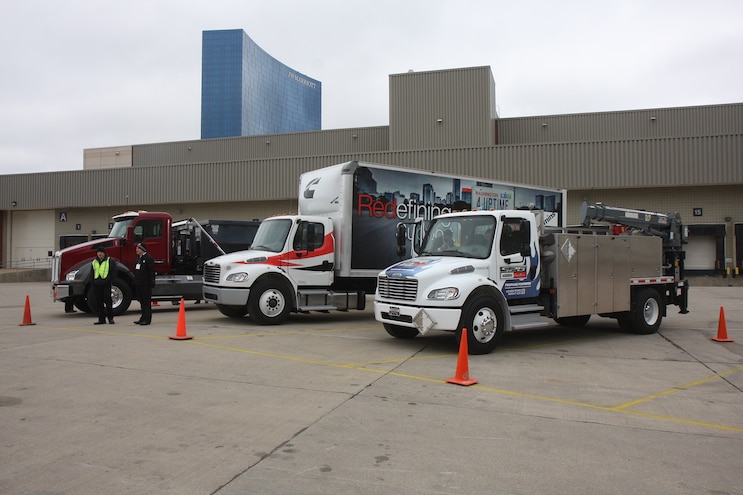 View Photo Gallery | 37 Photos
Photo 23/37   |   023 2016 NTEA Work Truck Show
Attendees who had commercial driver’s licenses were able to drive the variety of Kenworth, International, and Freightliner trucks at the Ride-and-Drive, while anyone with a conventional license could sample the smaller trucks.
Compact vans got their due at the show as well, with the Ram ProMaster City seeing duty as a scuba machine and the Nissan NV200 showing up dressed like a refrigerator. 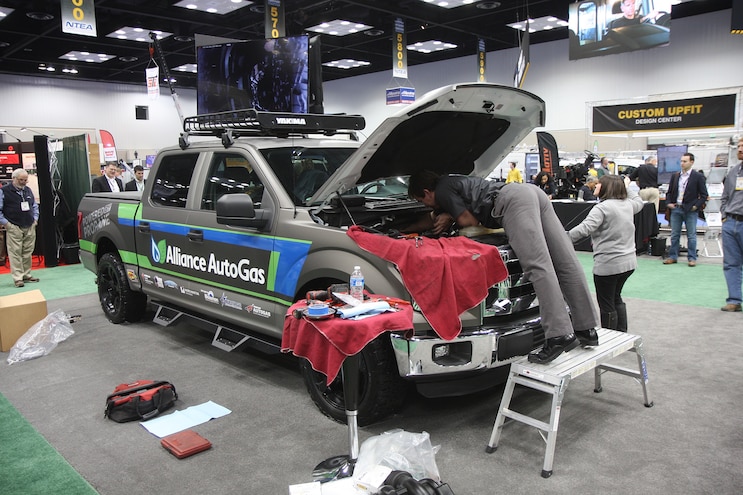 View Photo Gallery | 37 Photos
Photo 27/37   |   027 2016 NTEA Work Truck Show
Alliance Autogas put its money where its mouth was and proved how quick the company’s propane-gasoline bi-fuel conversion is to install. Two Alliance Autogas technicians were able to convert this custom Ford F-150 in a little more than 90 minutes—live on the show floor.
You couldn’t walk 20 feet without bumping into a Ram. These three were our favorites: the ultra-HD Ram 5500, Ram 3500 single-cab dualie, and, of course, the AEV Prospector. That last one was unusual because it wasn’t fit with any kind of bed, but that just made it cooler. 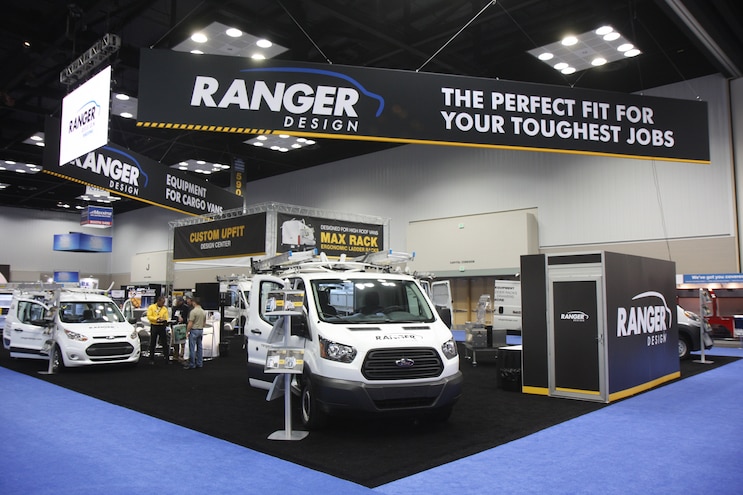 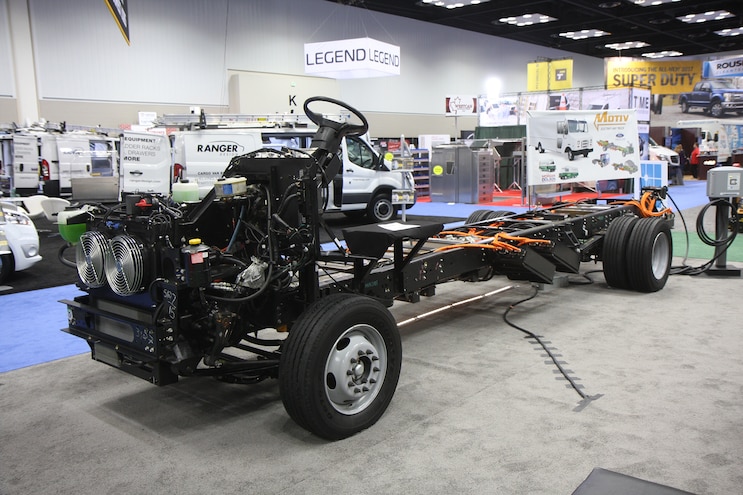 View Photo Gallery | 37 Photos
Photo 32/37   |   032 2016 NTEA Work Truck Show
This forms the basis of Motiv Power Systems’ all-electric Ford F-59 chassis. Returning for another year at the Work Truck Show, Motiv had lots of great news, including more and more customers adopting its 100-mile range, along with some extra cash flow. Next year, the company hopes to provide a truck for the Ride-and-Drive.
Westin Truck Bodies showed off its custom Chevrolet Silverado, including a whole bed full of Brute toolboxes. The truck’s off-road tires and other modifications were pretty cool as well.
Since Mack is one of the most famous names in trucking, seeing the company’s bulldog on the show floor felt like meeting a celebrity. 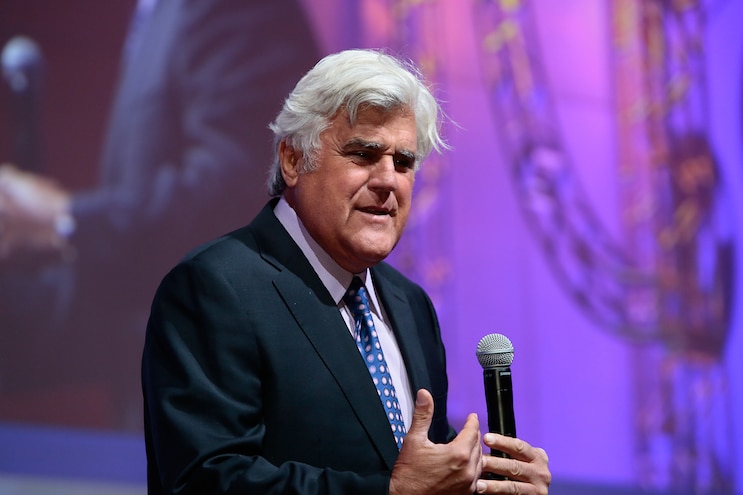