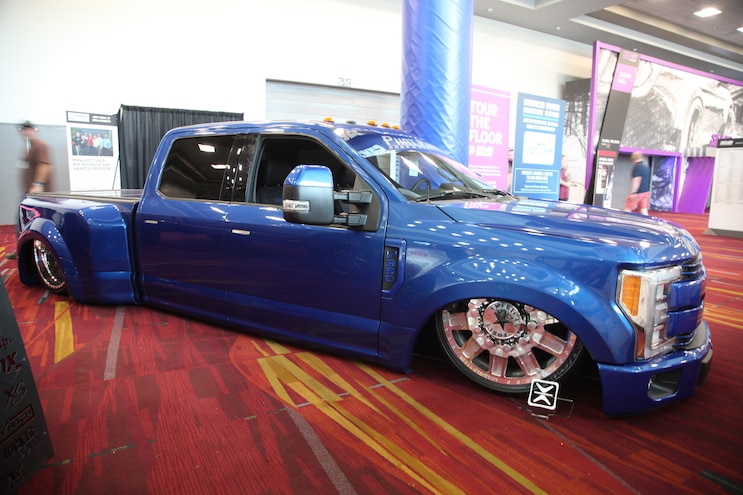 On the first day of SEMA, this editor headed straight over to the lower South hall, which is famous for the over the top wheel and tire company displays, but probably even more famous for the booth babes. They’re usually there signing posters featuring their likeness with a cool vehicle, and drawing a crowd to the booths in the process.
In an effort to check out and photograph every single truck and SUV, along with a whole bunch of cool wheels and tires, we had to skip the ladies this year. Instead we tried to get a little more in depth with each and every booth. American Force had an extremely strong showing this year; in addition to their giant display outside, they had their usual colorful array of giant trucks donning giant AF wheels. Mickey Thompson also had an impressive showing with new designs for both the MT and Dick Cepek Line of wheels and tires. Both Nitto and Toyo both had their usual giant display, along with a wide array of vehicles, and while they seemed to have downsized a bit, Asanti and Lexani still had their usual high-end looking booths that were bursting at the seams with onlookers. Some other booths we checked out were Ultra Wheels, Cooper, Pirelli, Hostile- who had the awesome PPC Customs-built Blazer on display and a whole bunch of others.
Keep checking back during SEMA 2017 and the weeks that follow for more coverage and check out Truckin Magazine for out top truck picks for the week.