#MTSEMA2018: All the Trucks of the North Hall 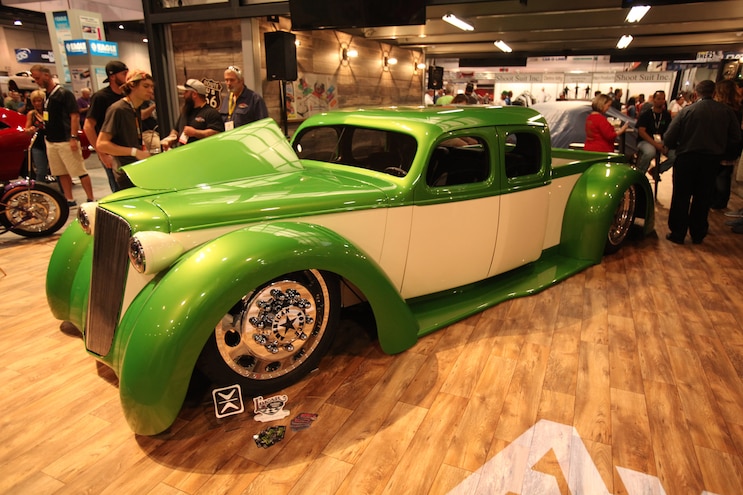 Team Truckin took the North Hall by storm on Tuesday and rounded up all the trucks and cool truck stuff we could find. And we have it all right here for you! SEMA’s North Hall is mostly known for mobile electronics. Some of the heavy-hitters we visited include Rockford Fosgate, Kicker, Powerbass, and a whole bunch of others. The North Hall is also home to the window film and vinyl wrap business, with 3M and Avery Dennison front and center. Avery Dennison had two live wraps happening with tons of onlookers while 3M had Chip Foose’s newly completed—and personal daily driver—’67 Chevy C10. The leather seat outfitters were on hand, with Roadwire, Katzkin, and Alea all offering a comfortable place to sit on some killer, leather-wrapped displays.
Some of the cool rides we checked out include a Kia Telluride (built by our friends at LGE-CTS) that just returned from New York Fashion Week. We also checked out a killer RPU from the folks at Welderup. Our favorite of the North Hall, however, was a former ’36 Chevy Sedan that was turned into a laid-out crew cab dualie on a custom chassis with Cummins power. Chad’s Customs was responsible for the killer build.
There were even some celebrities on hand in the North Hall who we crossed paths with. A whole slew of custom painters were on hand, including Gene Winfield and Ryno from Coast Airbrush. We spotted Richard Rawlings in the Dickies booth and, finally, we caught Tom McWeeney in the Red Kap booth pinstriping anything that was put in front of him.
All in all, it was a good-looking North Hall, and we can’t wait to get out and see the rest of the show.