Dozens of Trucks and SUVs, Including One Wacky EcoSport Ford previewed its 2018 SEMA Show offerings last week, and we finally got a chance to get up close and personal with them. Predictably, there was a huge smattering of F-Series trucks—SEMA members chose the pickup line as its Truck of the Year for how much investment it garners in the aftermarket. But there was also a large showing from the 2019 Ranger contingent, and Ford brought several SUVs and crossovers to SEMA as well.
Covering Ford’s entire show stand could take days, so here are a few of our favorites from the 2018 SEMA Show. 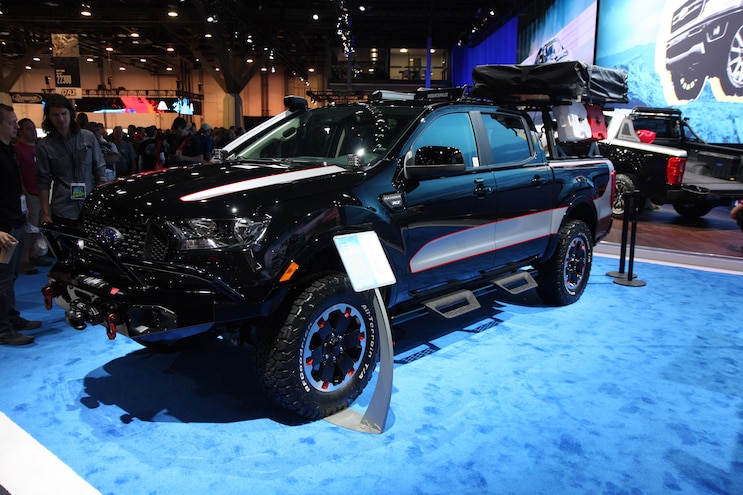 The Ford Ranger Base Camp has it all, with a robust stance delivered via a Fox 3-inch leveling kit and tires with a 32.6-inch outer diameter. There’s also a SkyRise rooftop tent and plenty of onboard storage, thanks to a Yakima roof rack, roof baskets, and plenty of customizable rack mounts and cleats. The black and silver color scheme with red accents is suitably badass, as well. 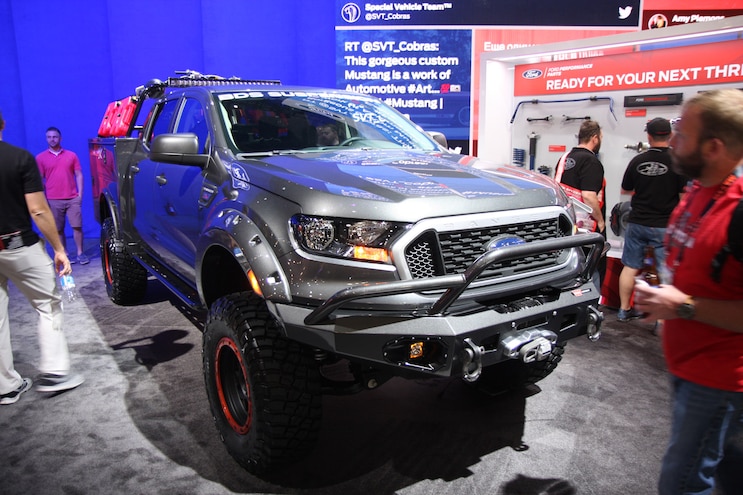 In our SEMA preview, this machine caught our eyes more than any other in Ford’s press release. Seeing it in person corroborated that excitement. A non-production extended wheelbase made room for a Knapheide utility box, kitted with a custom rack system for motorcycles, bikes, and other goodies. Off-road lighting, Fox 2.5 Factory Series coilovers, and custom body protection add to its bug-out appeal.

Pushing the limits of what a street-driven, emissions-legal truck can be, the Freak-O-Boost F-150 built by Full-Race Motorsports features the company’s twin-turbo upgrade and intercooler kit, plus an XDI high-flow fuel pump and a Yukon Gear 4:88:1 ring and pinion. An Icon 3-inch suspension kit improves off-road clearance, and the whole thing is dipped in a gorgeous, motorsport-inspired color scheme in legendary Gulf racing hues. 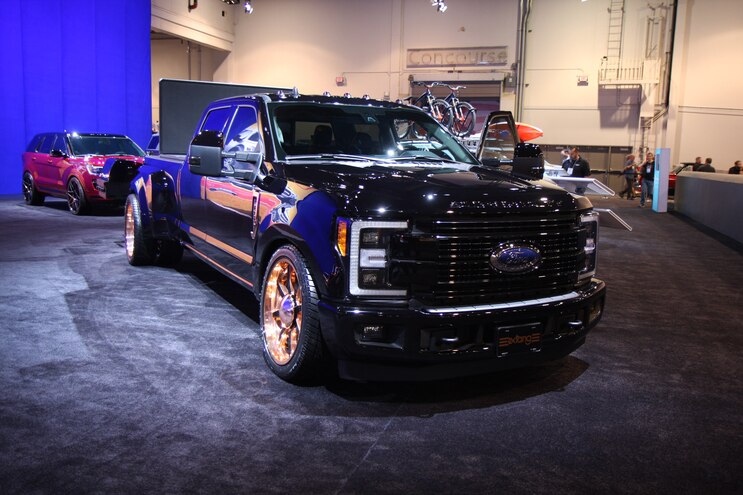 Billed as the ultimate tailgate truck, this dualie backs up the claim with a built-in cooler, barbecue grille, and dishes and cups—all copper-plated. There’s also an “integrated expanding game table,” but any college student will tell you it’s there for beer pong and beer pong only. The F-350 also gets a custom-designed suspension built by ARFT’s Speed Shop, laid out over custom, copper-painted 24-inch wheels from Fuel Off-Road. 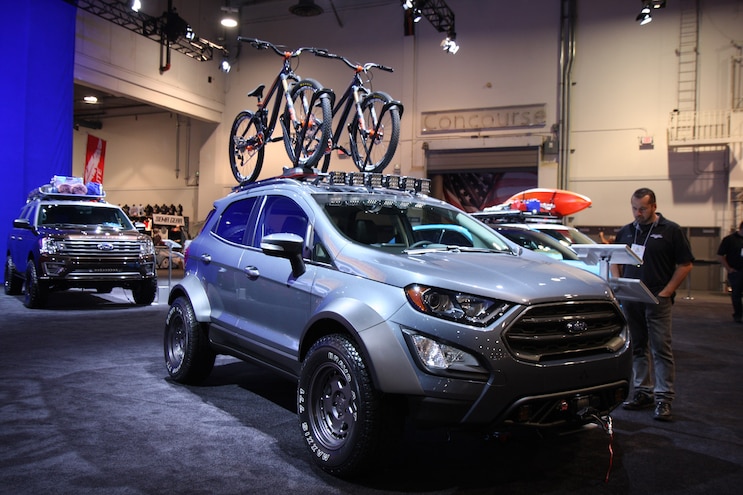 Ford’s littlest SUV receives a big infusion of off-road flavor, courtesy of Tucci Hot Rods. ISC Suspension supplied a set of coilovers, and the EcoSport hunkers down over a set of husky Maxxis all-terrain tires mounted on Fifteen52 Turbomac wheels. Custom front and rear bumpers and a spare tire mount add plenty of rallycross flair, though with limited modifications made to the engine or transmission, we don’t expect much hair-on-fire speed from this thing. Still, it looks like it’d be a hoot to chuck around a tight dirt road.

OK, so this one isn’t actually a show vehicle, but we couldn’t help ourselves. This Ford Edge ST is done up from stem to stern in severe matte black, with darkened wheels, headlights, taillights, and even a rear bumper skirt. But those modifications aren’t done in the name of style—they’re done to help this thing blend into a movie scene. Built by Pursuit Systems, this rig supports a 1,000-pound boom and camera setup, and Ford says its ST-specific, retuned powertrain and helper-sprung rear air suspension will help it film high-speed car chases for movies and TV.
There were more Ford vehicles than we could shake a stick at, including dozens of Mustangs and a rare RS200 rally car. These were just some of our favorites—notable entries that made us stop and say, “Huh, that’s interesting.” See more in the gallery below, and follow along with all our SEMA coverage using the hashtag #MTSEMA18.