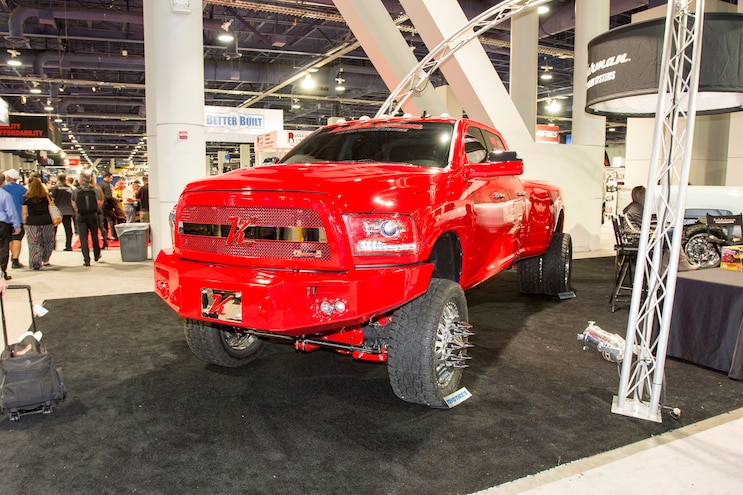 Take the wildest place on earth, add to it the biggest automotive event on earth, sprinkle in a couple hundred thousand people, top it off with a dash of nightlife and a drizzle of angry weather, and you have the perfect recipe for the 2015 SEMA show held at the Las Vegas Convention Center. You've undoubtedly heard of this industry-only trade show and have probably devoured the mountains of photos posted to our Truck Trend Network supersite (trucktrend.com) during the four-day show. It nearly broke the Internet, as page views soared off the charts.
What's the big deal about SEMA? There are several factors that, when compounded together, make SEMA—well, SEMA. First, it's not open to the public. Yup, many who would love to attend under the guise of passionate enthusiasts (which is more than enough for many events) are turned away. As human nature would have it, when we are told no, we instantly feel greatly deprived and insist on an irrational yes, what about me, feeling as though information and fun is being withheld, again doubling the curiosity as to what secrets lie out of sight within the convention center hallways. We don't want to touch wet paint until we are told not to. You get the idea.
Secondly, presumably all the big wigs in the automotive industry have some sort of representation, motivated by business factors ranging from simple exposure and a week away from the daily grind to multimillion-dollar agreements. Vendors, media, distributors, and buyers from all parts of the world gather in the same place, at the same time. While playing with trucks and the widgets that make them cool is fun, at the end of the day, it is all about money; many livelihoods depend on both small- and large-scale business success.
Resulting from this gathering of industry players is a third aspect that makes SEMA a big deal: the sheer number of people. A Wednesday afternoon stroll through the Central Hall is greeted by gridlock. The SEMA show covers more than a million square feet of real estate, yet there is gridlock in the halls. We’re talking rush-hour traffic. There is even a sign that warns of the impending chaos of daring to enter the halls: “Attention: By entering the SEMA show, you agree to be aware of your surroundings and leave immediately if you feel anything is unsafe.” Even for those used to being around a lot of people, it is still eyebrow-raising. From the top of the entrance stairs of one wall, the sea of busy people resembles trillions of busy ants going to and fro, causing your eyes to glaze over and your mind to literally shut down and resort to Facebook puppy videos. Indeed, even adults can be overstimulated. The outside exhibits offer comfort for the claustrophobic and entertainment for the thrill seekers, with driving demos throughout the day. However, shoulder-to-shoulder crowds are inescapable, even outside.
A fourth factor that makes SEMA a big deal is the prestige of having a vehicle in the show. It's a SEMA build. Those words carry clout because of the exposure SEMA brings companies and display vehicles. Having a truck at SEMA is a yearlong, often lifelong goal. It's a badge of honor and a confirmation of accomplishment. Lots of SEMA trucks get featured or are feature worthy.
A fifth factor that makes SEMA a big deal: It's OK to go all out—even overboard. It's Vegas, baby, after all! Vegas is like no other place on earth: an adult playground where many choose to leave their worries behind. It's a place where the ostentatious is applauded, where the ridiculous is the norm. It wouldn't be surprising if unicorns really existed in Vegas. This mindset seems to infiltrate SEMA vehicle builds, and it's OK. Las Vegas Blvd. is home to the craziest of crazy custom vehicles during all times of the year, and it's good, acceptable. SEMA only heightens the entertainment.
With the industry and innovation on the upswing, we can only imagine what’s in store for next year’s show. 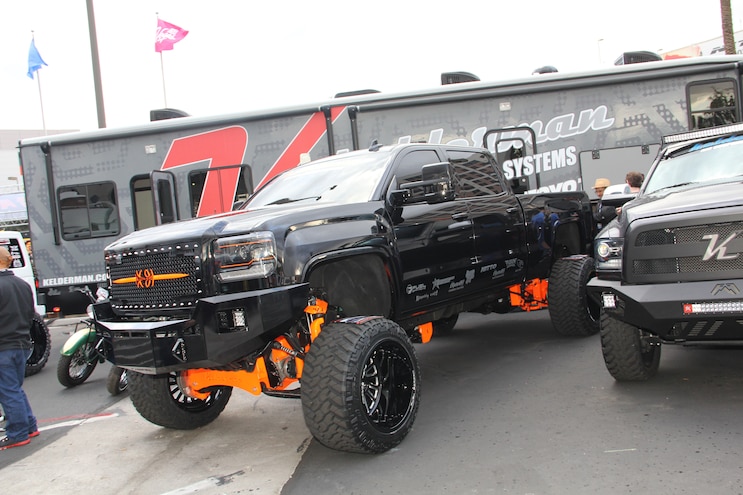 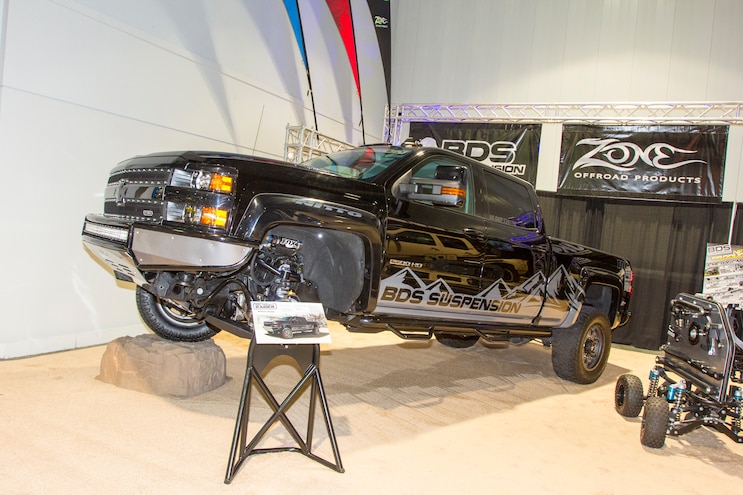 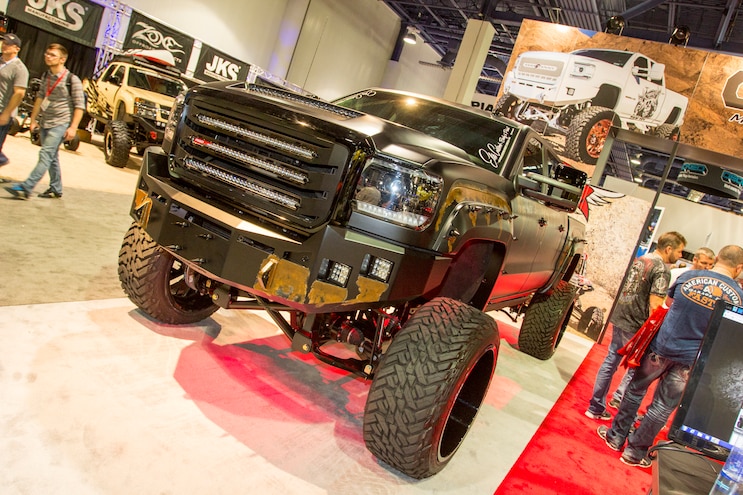 View Photo Gallery | 60 Photos
Photo 4/60   |   2015 Sema Show 006
This is MadDMax, a ’15 GMC Denali 2500HD built by Elite Customs Body & Paint and owned by John Mikalik. Perched proudly in the Cognito booth, it of course sports Cognito bits, including the front lift and control arms. Its flat black and rusted-out look give it a menacing demeanor and may hide a subtle but outstanding anomaly that truly makes this truck one-of-a-kind: the cab has been stretched to form a “mega” cab. 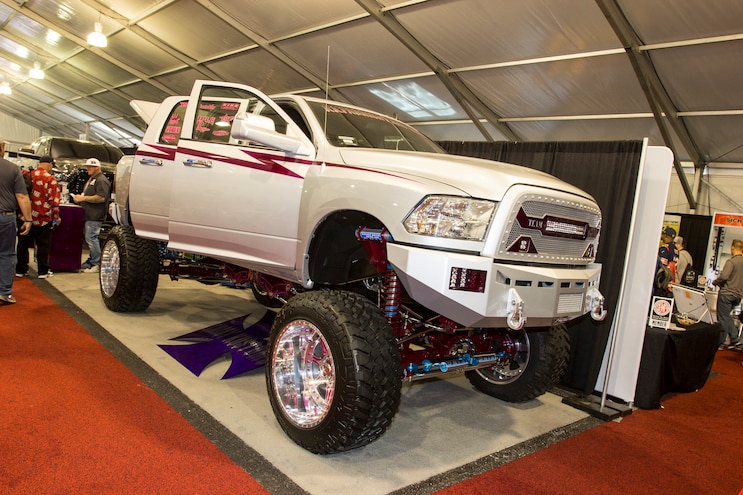 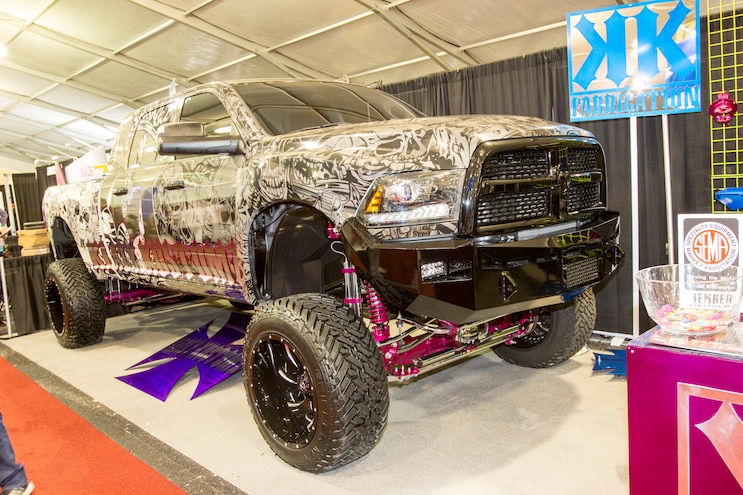 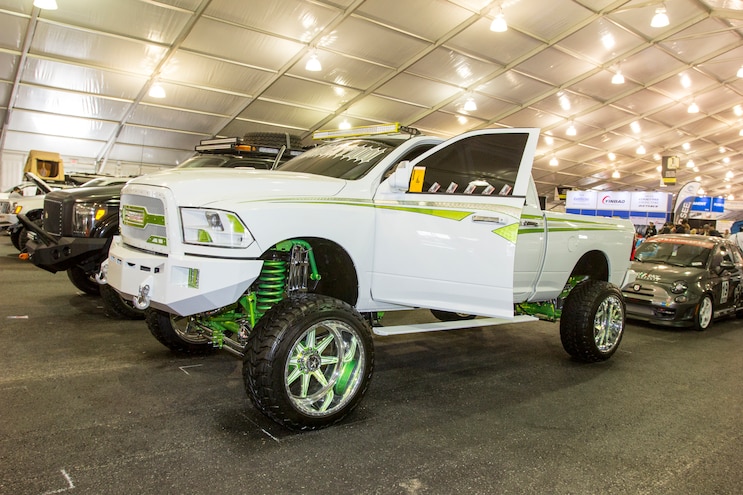 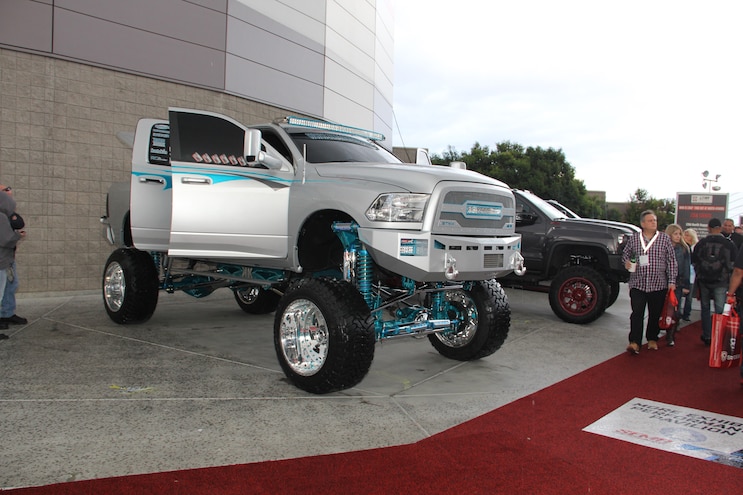 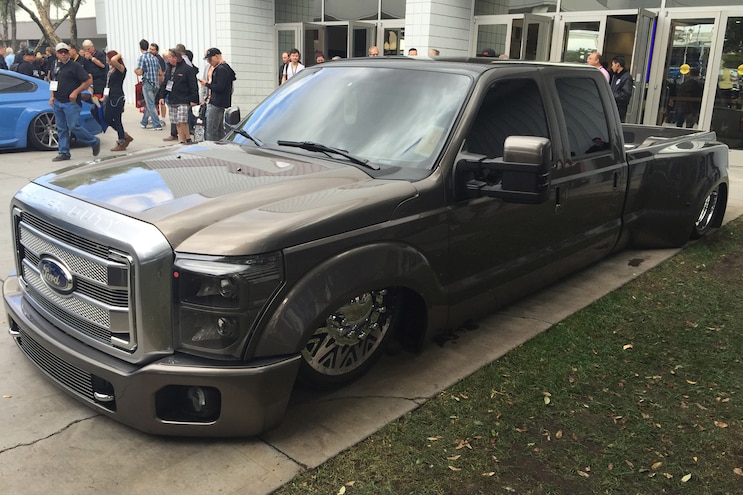 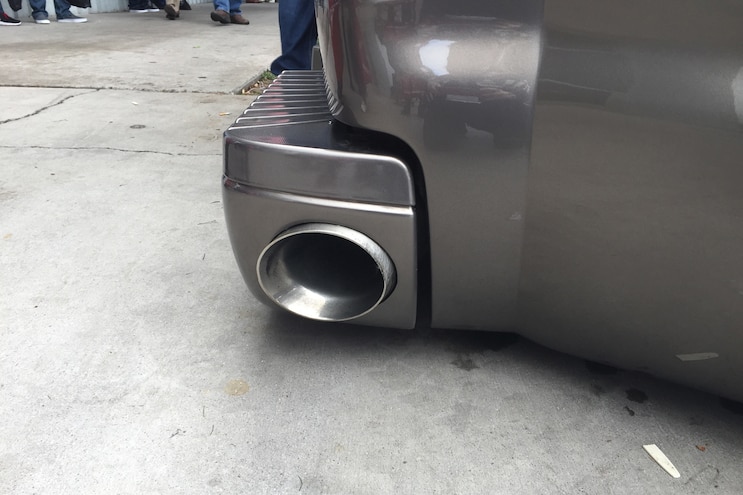 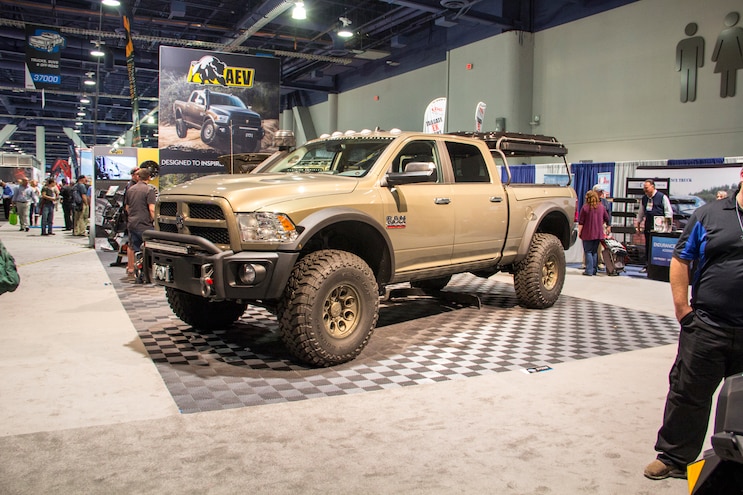 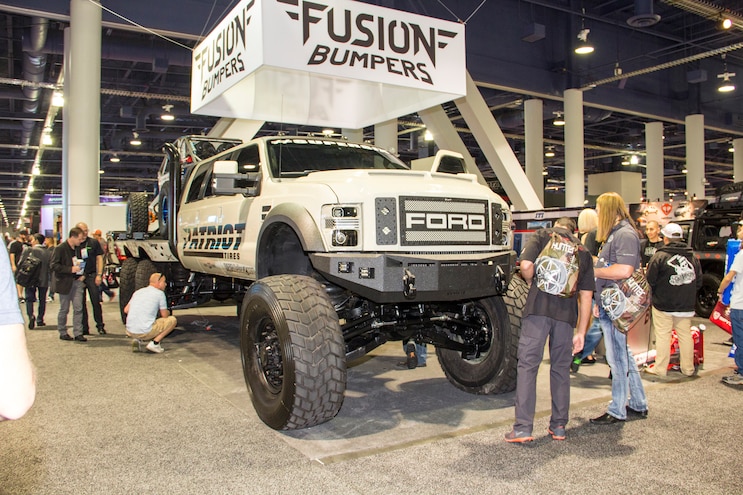 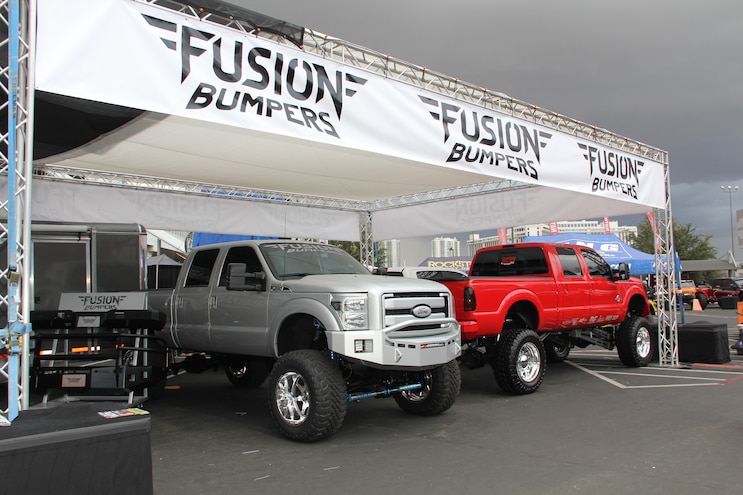 View Photo Gallery | 60 Photos
Photo 13/60   |   2015 Sema Show 053
Leave it to Fusion Bumpers to put something wild in its indoor booth and have a commanding presence outside. The Dieselsellerz.com/Patriot Tires Ford F-550 is a rear-steer, six-wheeled, six-doored behemoth bedazzled with a desert toy, just because. 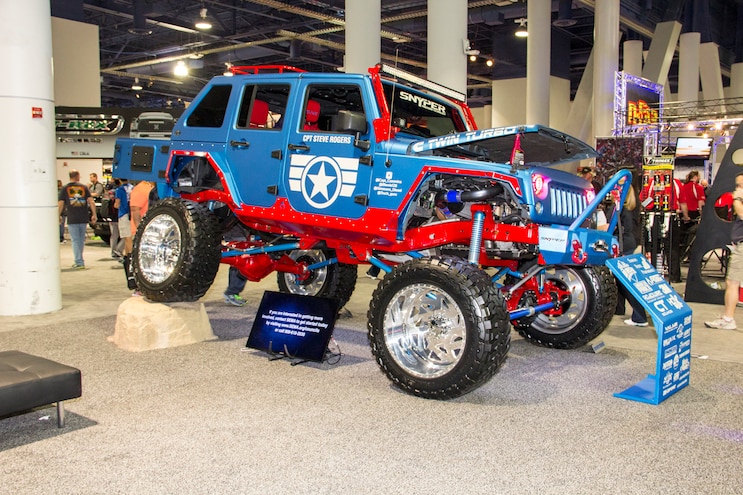 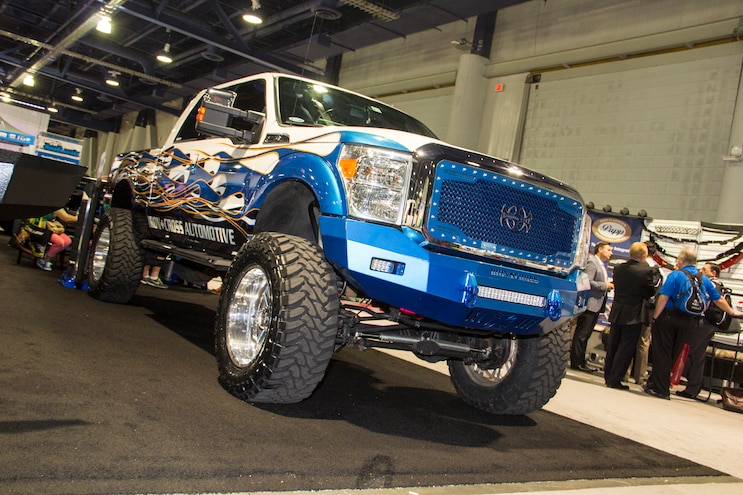 View Photo Gallery | 60 Photos
Photo 16/60   |   2015 Sema Show 058
American Force Wheels has a huge representation at SEMA, both in its indoor and outdoor booths. The company’s wheels can be found on numerous other HD trucks throughout the show, too. Its latest and greatest is a 28-inch dualie wheel, with optional 10-lug or direct bolt-on applications. Simply badass! 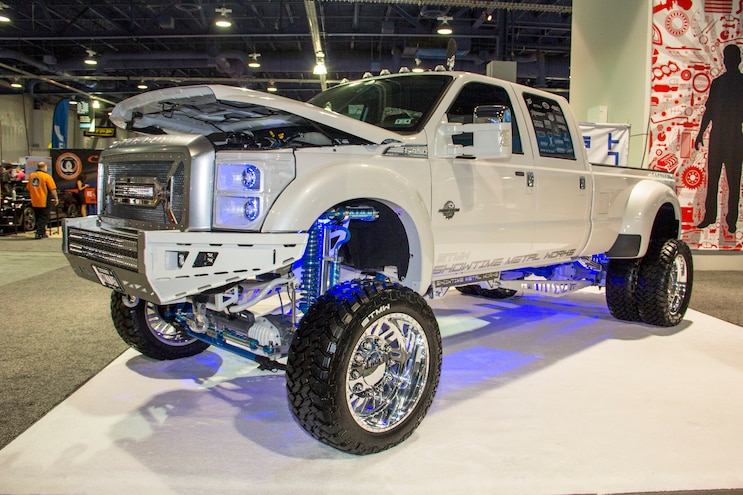 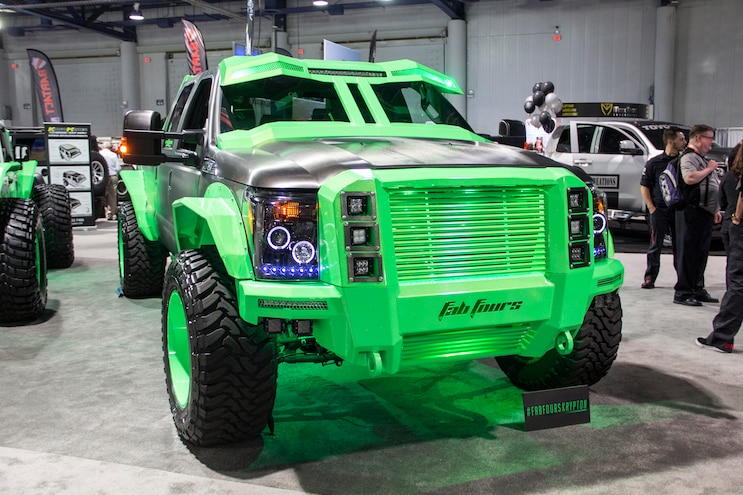 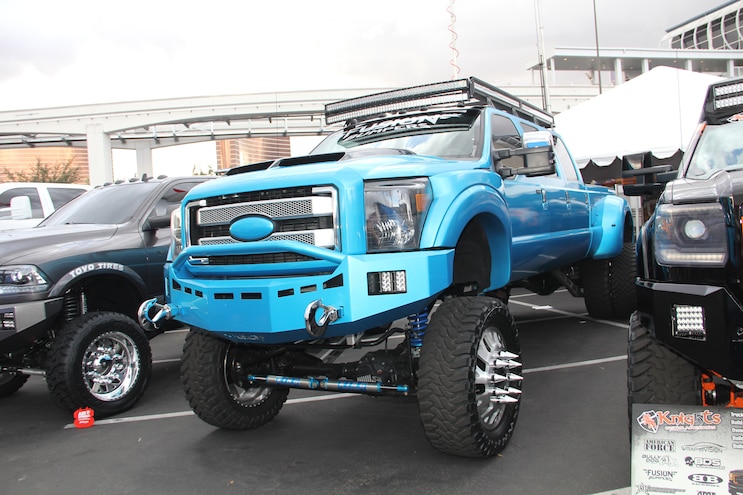 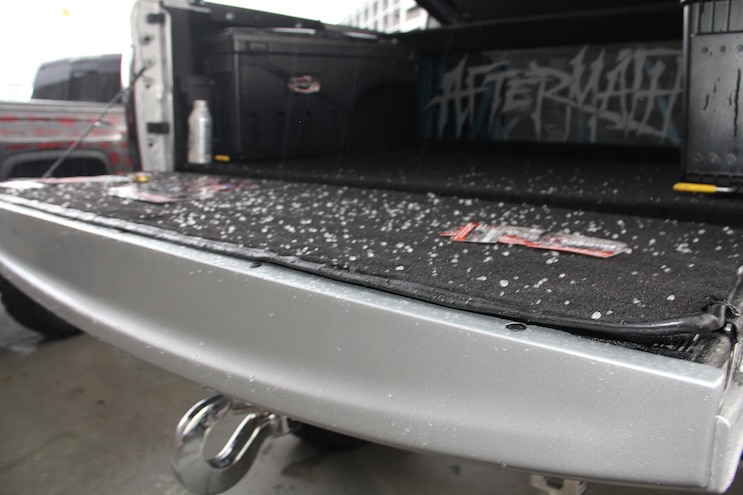 View Photo Gallery | 60 Photos
Photo 20/60   |   2015 Sema Show 057
That’s hail in the bed of a truck. It’s blurry, but let’s face it—we were all scrambling for cover. A cold storm rolled through Las Vegas on Wednesday afternoon, dumping a quick but aggressive torrent of rain and hail. It’s not the first time it’s rained during SEMA, but as for hail—well, that may be a first. 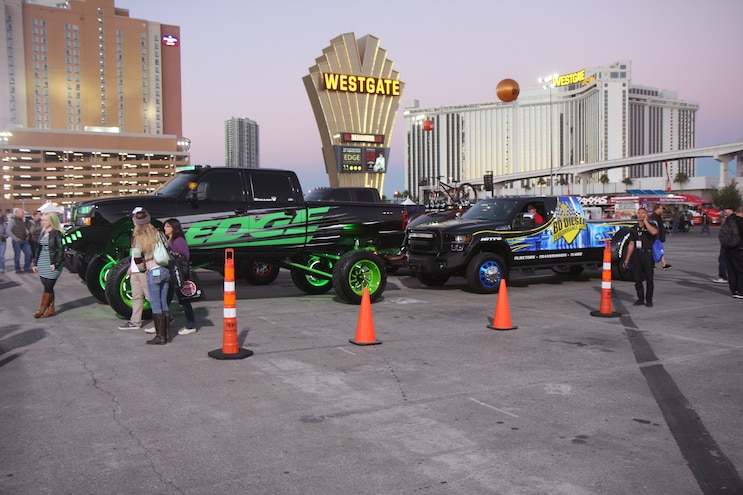 View Photo Gallery | 60 Photos
Photo 21/60   |   2015 Sema Show 059
Gentlemen, start your engines! The SEMA Ignited Cruise and after-party Friday night gave the opportunity to see SEMA vehicles in action as they cruised from the convention center to a nearby location for a night of festivities. It’s no surprise to see Brian Huff’s four-linked, solid-axle-swapped Chevy Silverado in the mix, as he drove the truck to and from SEMA. Behind the Silverado is BD Diesel Performance’s Ford F-350.