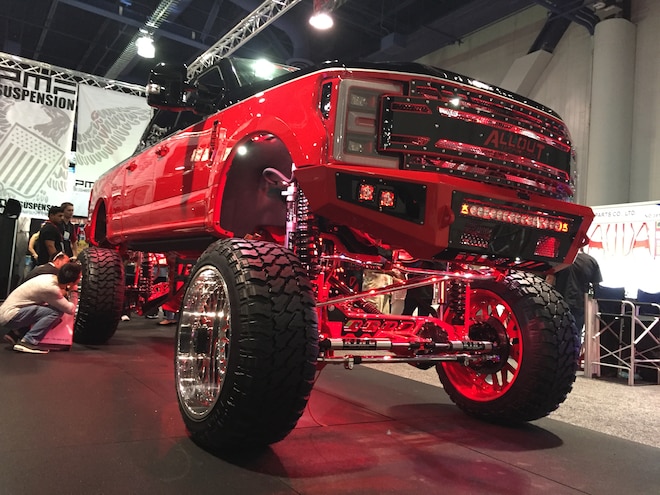 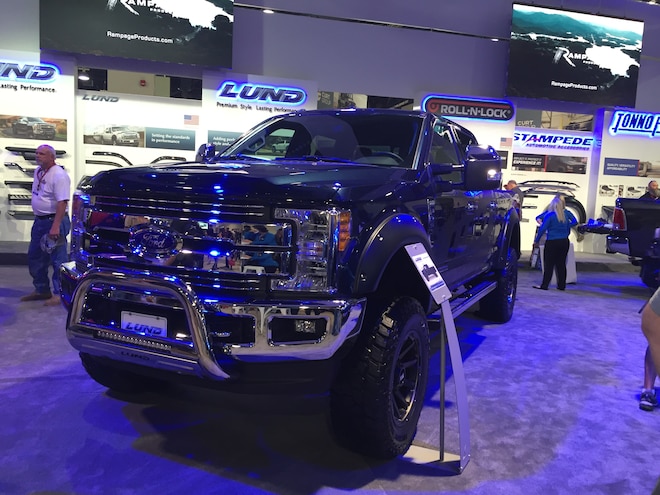 View Photo Gallery | 26 Photos
Photo 2/26   |   25 Upper South Hall 2017 Ford Super Duty Trucks 001
Not a Ford guy? Too bad. That’s not an option at the 2017 Sema Show in Las Vegas, Nevada. Not a Super Duty fan? Even more specifically, not a 2017 Super Duty fan—you know, the aluminum-bodied ones? Again, too bad. Upon entering the show grounds earlier today, it became apparent that we were going to be seeing a bunch of Ford’s HD variants, including the F-250, F-350, and F-450. Our observation that lifted, fully-customized Blue Oval truck were going to make their presence known was confirmed upon exploring the Upper South Hall, which is the Truck and Off-Road hall. In just this one nook of the show alone, we captured 25, and interestingly, most of the Super Duty trucks overall were brand new; we saw very few that were not. Isn’t that crazy? A 2016 model year is suddenly “old.” That’s Sema for you! Some were full-blown showstoppers, as you would expect to find at SEMA. Others were of the milder nature and may have had an accessory or two on display. We found a previous cover truck in the mix—the MAD Industries’ dualie, which was on the cover of the July 2017 issue of 8-Lug and was in the Ford booth last year. While there may have been ’17 Super Duties last year, they definitely seem more prevalent this time around.

- OF
By Monica Gonderman
713 Articles