Another edition of the Truckin Throwdown has come and gone, and 2015 has only grown to be bigger and badder than years past. Our competitors had been culled from a large list of loyal readers who signed up and were ready to put themselves and their trucks to the test. The five event series consisted of the Show 'n' Shine, Slalom, Stop Box, quarter-mile Drags, and Autocross course, each offering a total of 10 points apiece. EBC Brakes returned as the title sponsor, but this year we were able to add Magnuson Products and Belltech Sport Trucks on to the sponsor list as well. With the track lined up, the competitors ready to thrash, all that was left was to get our set of custom-designed trophies from Phil Cholette, our favorite Canadian machinist over at PhilbuiltDesigns.com, and have ourselves a Throwdown!

View Photo Gallery | 42 Photos
Photo 2/42   |   2015 Truckin Throwdown Competitors
The competitors came from all walks of life and a variety of age ranges, and their trucks could not have been more different. All had brought serious firepower with them in the form of tighter suspensions, lowering kits, intakes, custom exhaust setups, even a few superchargers! All the guys were here to win, but at the end of the day all we saw was a group of friends who met at the track to challenge each other and have a few laughs in the process.

View Photo Gallery | 42 Photos
Photo 13/42   |   2015 Truckin Throwdown Dan Glauser 1969 Chevy C10
4 - 1969 Chevy C10
Owner/City/State: Dan Glauser - Mesa, Arizona
Dan Glauser and his fully built '69 C10 found out about Throwdown 2015 a few weeks after the deadline had passed, and he was put onto the list of alternates. But as is bound to happen, a few early entrants dropped out and he stepped up to fill their spot and we were stoked that he did. His two-tone blue-and-white C10 was more than just a show queen as it was packing an LS motor mated to a 75mm turbo, LS9 head gaskets, with a 3,500-stall converter and posi drive. Keeping the C10 ground-bound is a set of Nitto NT05R's mounted to Budnik wheels.

View Photo Gallery | 42 Photos
Photo 15/42   |   2015 Truckin Throwdown Matt Ochoa 2005 Gmc Canyon
5 - 2005 GMC Canyon
Owner/City/State: Matt Ochoa - Sacramento, California
Followers of Throwdown in the recent past may remember Matt Ochoa and his '05 Canyon from the 2012 event. The inline-five ran into a little mechanical failure back then and vowed to get back to Throwdown! A little perseverance and a lot of late night repair sessions got it back on the road and back into Throwdown 2015! A whole bunch of performance is crammed into that engine bay, with forged pistons, a custom STS turbo kit, Snow Performance boost cooler, while a fully built 4l65 feeds a Truetrac diff with 3:73 gears. Naake Suspension along with QA1 coilovers and shocks keep this pit bull pug of a truck running true.

View Photo Gallery | 42 Photos
Photo 18/42   |   2015 Truckin Throwdown Luis Beto Rodriguez 2014 Chevy Silverado
6 - 2014 Chevy Silverado
Owner/City/State: Luis "Beto" Rodriguez - Anaheim, California
Another name that Throwdown followers might remember is Beto Rodriguez in his blacked out '14 Silverado. Not only is he a serious competitor, his truck's silhouette appeared as the 2015 logo. Taking winning seriously, this '14 is equipped with a Whipple supercharger, Comp Cams performance cam, Kooks long-tube headers, and a Circle D 3,000-stall converter on the 6L80E trans. Lowered on a DJM 4/7 inch lowering kit installed by Crespo Suspension, and rolling on stock 18-inch wheels mounted to 235/60R18 Bridgestone Dueler tires. So when this black bomber rolls up next to you at the starting line you better know what you're doing.

View Photo Gallery | 42 Photos
Photo 21/42   |   2015 Truckin Throwdown Eric Carillo 1993 Ford F150 Lightning
7 - 1993 Ford Lightning
Owner/City/State: Eric Carrillo - Compton, California
Another late addition to the roster, Eric Carillo brought a real threat with a first-gen Lightning boasting over 900 hp! Helping the '93 achieve such a lofty number was 5.0L Coyote swap, a Kenne Bell supercharger, Dynomax Exhaust, B&M shifter, Optima Battery, and Curry rearend. Eric brought a level of competitiveness that saw him walking the dragstrip with a shuffle and stomp cadence to test the track surface. This laid-back guy with the soft-spoken demeanor switched gears when it came time to race, but his right foot got the best of him and he hit more than a few cones, which affected his totals a little.

View Photo Gallery | 42 Photos
Photo 27/42   |   2015 Truckin Throwdown Rene Rodriguez 2014 Chevy Silverado Ltz Z71
9- 2014 Chevy Silverado LTZ Z71
Owner/City/State: Rene Rodriguez - Anaheim, California
Rene and his '14 Z71 were easily pushing the most sheetmetal up and down the track, but that did not stop him from being one of the most entertaining competitors at Throwdown 2015. He flung all 5,000-plus pounds around every corner with ease. Power comes out of the stock 5.3-liter, regulated only by Rene's very heavy right foot and tendency to leave little room between the bottom of the pedal and the floorboard. 7-inch Belltech drop spindles, with 4-inch DJM arms and a bridge notch barely make enough room for the 26x9 and 26x12 Raceline wheels taking up the entire wheelwell.

View Photo Gallery | 42 Photos
Photo 30/42   |   2015 Truckin Throwdown Carlos Cortez 1995 Ford Lightning
10- 1995 Ford Lightning
Owner/City/State: Carlos Cortez - El Monte, California
Carlos Cortez and his '95 Lightning have beer racing around as part of Team Billet, ripping up pavement at track days, showing up to meets and club events, and generally getting a lot of looks on the street.
Power pumps out from its 5.8-liter, producing a little over the stock 240 hp and 340 lb-ft of torque thanks to a K&N cold air filter setup, MSD Super Conductor plug wires, and deleted cats. All the rockin' and rollin' is handled by a set of Belltech shocks and a set of sway bar locks. Rolling stock takes the form of 24x10 Intro Twisted Rally wheels shod in grippy 285/35R24 Saffiro SF800 tires. 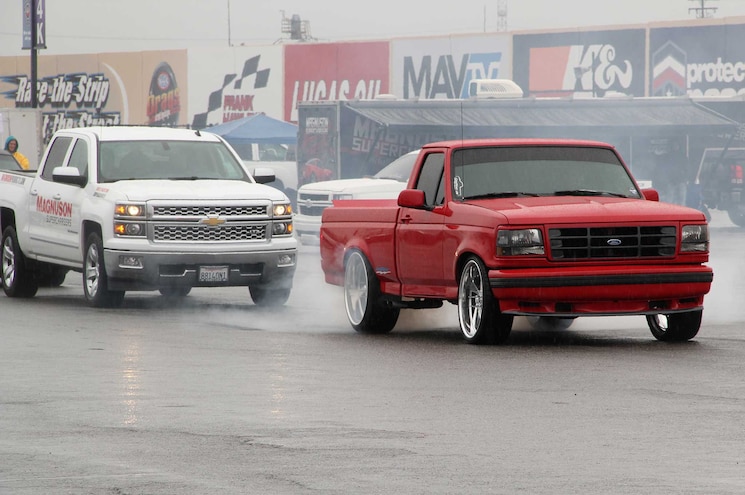