How To Buy A Cheap Mercedes-Benz Diesel 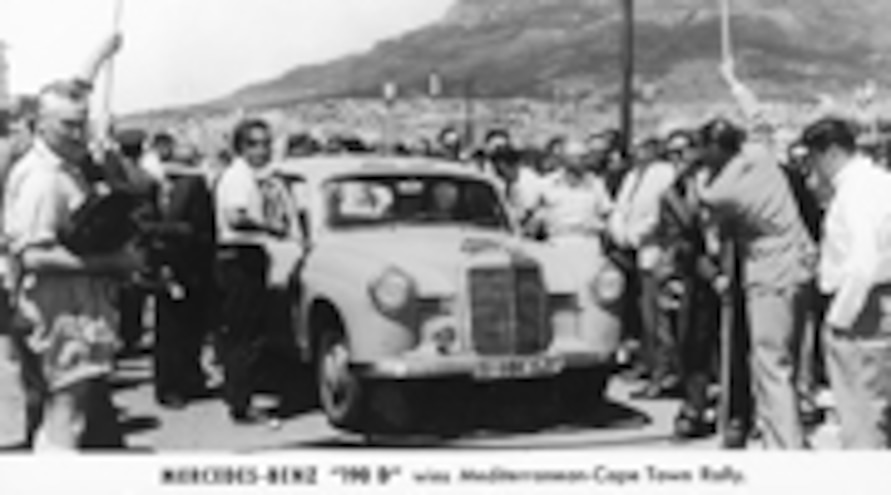 If you look at a newspaper, craigslist.com, or eBay, chances are you'll be able to find a diesel-powered Mercedes-Benz (MBZ) car that gets at least 25 mpg for less than $2,000-and that's just the asking price. That's not a big buy-in amount for a commuter that sips fuel, and we don't know if you've heard, but MBZ makes some darn good cars. Here are the models you're most likely to find for less than $2,000. 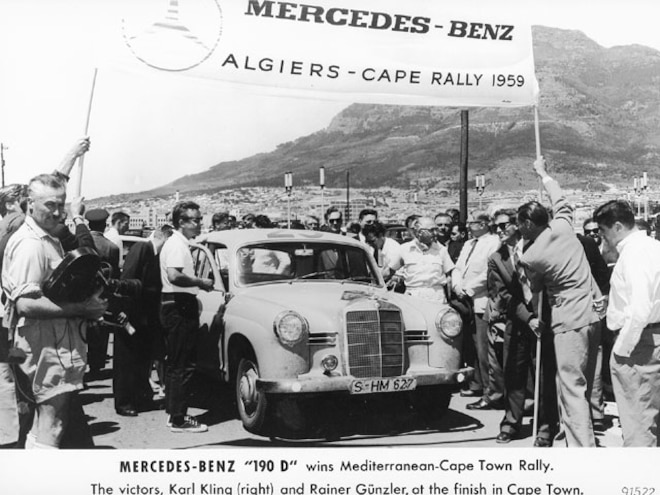 View Photo Gallery | 18 Photos
Photo 2/18   |   In 1959, Mercedes-Benz racing manager Karl Kling won the 8,728-mile Africa Rally in a 190D. He wanted to prove that a diesel could be sporty and completed the race from Algiers, France, to Cape Town, South Africa, with an average speed of 50 mph.
Back in 1936, Mercedes-Benz unveiled the first diesel-powered passenger car. It was a 2.6L four-cylinder engine that used a Bosch injection pump, made 45 hp at 3,200 rpm, and achieved 24.7 mpg. The 260D quickly became a favorite of taxi companies in Germany because diesel not only cost less than gasoline but, with a passenger transfer license, it also cost 25 percent less per liter. It was no surprise when the diesel car became a hit. The 260D led to the introduction of the 1.8L 170D in 1949.
Then, in 1954, a 1.9L, 50hp version of the diesel was put into the new Ponton unibody chassis (also called the W 121) and became the 190D. That year, journalist Bill Carroll drove this diesel car across the USA to create awareness of the new import. A Fintail (W 110) 2.0L was also sold beginning in 1961. You're less likely to find any of these models because of their age and the lower production numbers, but if you're looking for a simple car with old-fashioned styling, a 190D may be right for you. 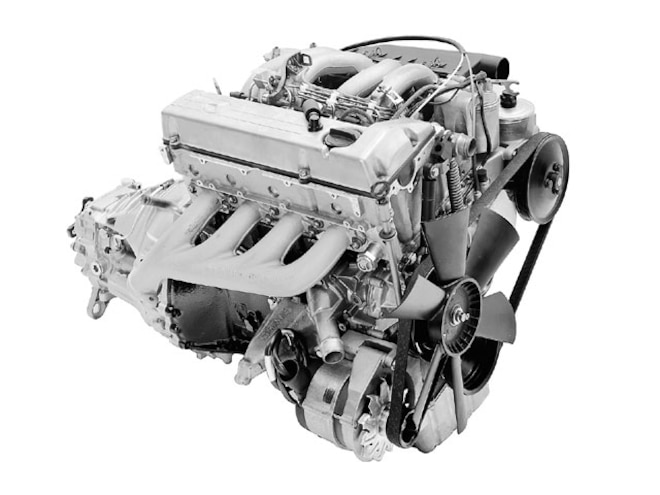 View Photo Gallery | 18 Photos
Photo 6/18   |   The 45hp OM601 four-cylinder, indirect-injection diesel engine (below) features a single overhead camshaft, a prechamber in the intake for better combustion, a four-plunger Bosch fuel-injection pump, and a crankshaft running in five bearings to reduce vibrations.
In 1973, the W 115-series 240D was added to the Mercedes-Benz lineup, and by 1974, it came with a 3.0L, five-cylinder engine with an improved injection system. This engine produced 80 hp at 2,400 rpm, giving the car a respectable 92-mph top speed and knocking about 10 seconds off the 0-60 time (to 19.9 seconds). The 240D became one of the best-selling diesel cars of all time, with 945,206 of the W 115 cars being sold. This model with vertical headlamps also became a favorite in the U.S., so there are a lot more of them on the market than the 190D.
In 1976, due to high demand, Mercedes-Benz sold the W 115 diesel cars alongside the new W 123 models (with horizontal headlamps). It's confusing, but with the new W 123 body, a 240D comes with four cylinders and the 300D is the five-cylinder model-so count the injector lines when you go for a testdrive. The new diesels received an upgraded engine that featured a stronger Ferrolastik head gasket, an improved exhaust system, and new oil- and fuel-filter designs.
Thanks to Corporate Average Fuel Economy (CAFE) regulations in the U.S. and Canada, Mercedes-Benz decided to sell the 300CD coupe starting in 1977. By offering an additional body style (which was lighter and got better mileage), the company was able to raise its overall consumption statistics. A W 123 station wagon was also sold during this time, and now these spacious diesels are often being sold at a premium price.

View Photo Gallery | 18 Photos
Photo 7/18   |   The '74 3.0L, five-cylinder diesel.
At the 1977 Frankfurt International Motor Show, Mercedes-Benz debuted the turbocharged S-Class 300SD (W 116) specifically for the North American market. It had the 3.0L, five-cylinder engine and a Garrett turbocharger that bumped the output up to 115 hp. The extra power allowed the heavy sedan to reach 60 mph in about 14 seconds while getting 16.8 mpg (compared with 10.7 mpg for the gas version).
In 1981, tougher CAFE rules prompted Mercedes-Benz to add a turbocharger to the W 123-series cars. The 300CD coupe gained a turbo, and the 300D turbo sedan appeared-both were reserved for the North American market (sorry, Eastern Hemisphere). A station wagon with the turbo-powered mill was also available. For our money, the turbocharged cars are the best buys because they can be found for about the same price as the normally aspirated models but offer much better performance and still get terrific miles per gallon.
In 1983, the W 201-series got two diesel engines for the new 190D, which were called Whisper Diesels because they were completely encapsulated to trap noise. The 190D 2.2 used a four-cylinder engine, and the 190D 2.5 was equipped with a turbocharged five-cylinder that made 122 hp at 4,600 rpm and had a top speed of 119 mph. The W 201 body style is a big improvement over the models previously mentioned, and we'd suggest you jump on a 190D 2.5 if you find one for around $2,000.
In 1985, the W 124-series 300D got an inline-six engine that made 109 hp, and the six-cylinder turbo debuted in the 300DT station wagon. This engine made 143 hp and was improved to make 147 hp in 1988. The sedan was known as the 300D Turbo, and a 4Matic all-wheel-drive version was also offered. Other diesel models were offered through the '80s and into the '90s, but you are unlikely to find a 350SDL or E300 turbodiesel for less than $3,000.
Broken engine mounts: The engine will shake your entire car. Diesel engines have a lot of torque, and these mounts break often.

View Photo Gallery | 18 Photos
Photo 14/18   |   This W 123 crash test shows how well even older Mercedes-Benz cars are built.
Broken air-filter bushings: If the intake is loud and shaky and the air-filter housing is loose and bouncing around, it's easy to replace these cheap bushings. If left unattended, they can pull the turbo air intake off, allowing dirt and debris to enter the engine.
Car won't shut off: This problem is so common that Mercedes diesels have a shutoff button on the engine. This is most often a vacuum issue. Look for loose vacuum hoses and cracked vacuum lines. The vacuum controls the door locks, engine shutoff, transmission shift, brakes, climate controls, plus a host of other functions. Something as simple as a leaking door-lock valve can cause rough shifts and prevent your engine from shutting off.
Incorrect fuel gauge: This is caused by diesel sludge buildup on the tank sender, and it most likely just needs cleaning.
Fuses: The fuse holders are copper, while the fuse is often aluminum. The result is corrosion and a good fuse that isn't making contact. You can test both sides of the fuse with a test light or, in an emergency, wiggle the fuse to make contact. It's best to use copper replacement fuses.
You can sink a fortune into these cars and always have something new that you can fix. Or you can sink in next to nothing, and your car will still last forever. I suggest bringing the car to the condition that you're comfortable with, relax, and enjoy years of reliable service.
-Brian Friedman, www.lovecraftbiofuels.com
Mercedes-Benz diesels are some of the best vehicles ever built and hold the Guinness World Record for longevity. With basic maintenance-regular oil changes, valve adjustments every two years, and so on-you can expect your engine to last 500,000 miles. The entire vehicle is built incredibly well, and now that they're old enough to be considered classics, there are some common issues you may notice.

View Photo Gallery | 18 Photos
Photo 18/18   |   Greek taxi driver Gregorios Sachinidis holds the Guinness World Record for the highest mileage in a car. His 240D has more than 2,858,307 miles on the odometer. You can expect about 500,000 out of a Mercedes-Benz diesel engine if you take care of it.
1. Engine: Although they're often gutless and smoky, more often than not, they're easy to bring back to life. Smoke on initial startup is normal, and new Bosch glowplugs will help-as well as an oil stabilizer, like Lucas. If it's a turbo, at least 90 percent of them can regain power and performance by a simple adjustment of the ALDA valve, which increases fueling when turbo boost is present. Some smoke on acceleration is normal, and adjusting the ALDA valve can also help this. If you have smoke at a steady cruising speed, it's a sign of excessive engine wear, and thicker motor oil is the easiest way to buy more time. A long freeway drive is the quickest way to smooth out a neglected engine.
2. Transmission: If you have an automatic transmission, it can be expected to last between 175,000-200,000 miles. Although these transmissions are solid, they're quirky and often have issues that feel more serious than they actually are. Hard shifts are common and can usually be adjusted out. Revving between shifts is also adjustable, but it's often a sign that the transmission is on its last legs. Low power is often a transmission issue. They start off in Second gear, and if the transmission doesn't kick down to First when needed, it will result in very sluggish acceleration. Driving in "S" around town will change your shift points, resulting in more responsive acceleration.
3. Power windows: These are a very common problem as the cars age. Most often, the switch itself has corrosion in it and can be cleaned or replaced. People use the switch panel as a drink holder, and there is almost always crud and dirt in the switch contacts. Although Mercedes charges up to $100 for replacement switches, try a wrecking yard or eBay for a better deal.
4. Leaks: These cars mark their territory; that's all there is to it. Fix a drip and another will follow shortly. If you're frequently topping off your oil, you have a problem that needs fixing, otherwise, get used to it. If fuel is leaking on or around injectors, your return lines need to be replaced. Simply pull them off and push on new ones. Don't skimp; use Mercedes-Benz rubber return lines from Germany.
5. Maintenance: These cars are cheap and easy to maintain because they lack the following: carburetors, spark plugs, wires, distributor caps, rotors, and so on. Just make sure to change your motor oil and filter often-and never run out of oil or coolant. The most common causes of engine failure are running out of motor oil and overheating. Use good Bosch glowplugs, Delo 15W-40 oil with Lucas stabilizer (if needed), and adjust your valves every two years. Your Mercedes will start and run like a dream.