Each Generation With Something Unique To Offer 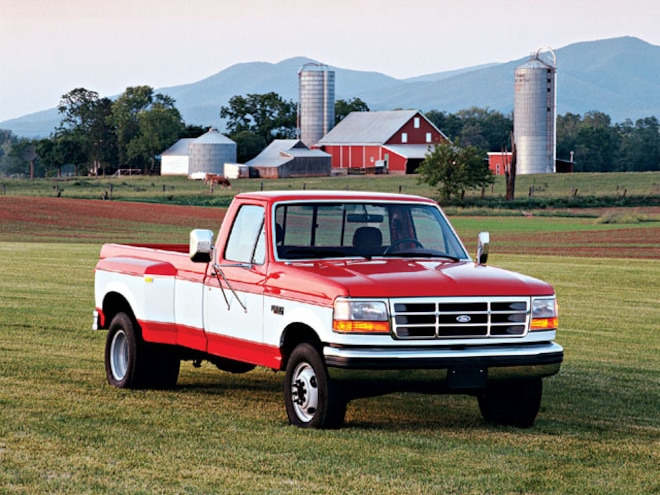 View Photo Gallery | 13 Photos
Photo 2/13   |   ford Power Stroke Diesel 1994 Ford F350
Midway through the '94 model year, Ford began equipping trucks with a revolutionary new diesel engine built by International. The market-changing V-8 displaced 444 ci (7.3L), was direct-injected, turbocharged, and featured a hydraulically actuated, electronically controlled unit injector (HEUI) fuel system. The engine was designated the T444E by International, meaning the engine was a turbocharged 444ci mill that was electronically controlled. Ford called it the Power Stroke. With the release of the 7.3L Power Stroke, International pioneered the idea of electronically controlled diesel engines in pickups, which would later become commonplace on GM and Cummins diesels.
In 1994, Power Strokes effectively revolutionized the diesel market in terms of power with 210 hp and 425 lb-ft of torque, as opposed to the previous IDI turbo numbers of 190/390. To further put the mid-'90s turbodiesel scene into perspective, the '94 Cummins put out 175 hp and 420 lb-ft and the GM 6.5L put out 180 hp and 360 lb-ft. 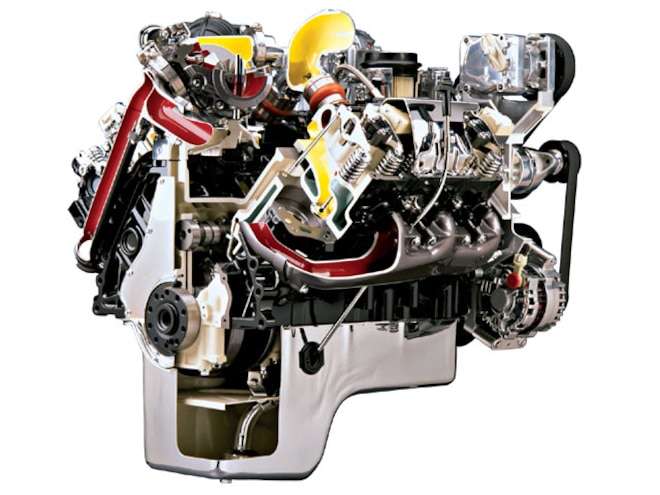 View Photo Gallery | 13 Photos
Photo 3/13   |   While considered a modern marvel in its day, the first-generation Power Stroke's simple overhead two-valve design carried over from its predecessor, the 7.3L IDI.
Engine Basics
The first-generation Power Stroke's combination of a simple, overhead two-valve design coupled with conservative power ratings resulted in a reliable, efficient diesel engine that could last 300,000 miles and beyond. The engine utilized a bore of 4.11 inches, a stroke of 4.18 inches, a cast-iron block, cast-iron cylinder heads (six bolts per cylinder) and forged steel connecting rods. The compression ratio on the Power Stroke was lower than its predecessor at 17.5:1. Dry engine weight was a stout 983 pounds.
Second-Generation Power Stroke
The second generation of 7.3L began with the '99 model year. This version of the Power Stroke was intercooled (termed charge air cooling or CAC), fittingly for trucks labled "Super Duty," and put out more horsepower and torque. First-year Super Dutys and '00 engines put out 235 hp and 500 lb-ft of torque. Although '99 and '00 models shared the same engine, '99s can be spotted by their "Power Stroke V-8" badge that is visible in front of the truck's front fender-wells. Power Stroke badges built in 2000 or later are displayed on the bottom of each truck's door panels.
Hydraulically Actuated Electronically Controlled Unit Injector
The new HEUI fuel systems on the Power Stroke required the use of two oil pumps. A low-pressure (lubricating) pump feeds oil into the high-pressure oil reservoir, where the high-pressure oil pump (HPOP) forces oil through oil lines to two high-pressure oil rails, one located in each cylinder head at an injection oil pressure of 500-3,000 psi. The pressure is controlled electronically by a regulator located inside the pump. Basically, all of this culminates in a unique system where the oil increases the fuel pressure at the injectors.
All first-generation Power Strokes came equipped with 15-degree high-pressure oil pumps located at the front of the engine, a mechanical fuel pump in the engine's valley, and 90cc shot fuel injectors. 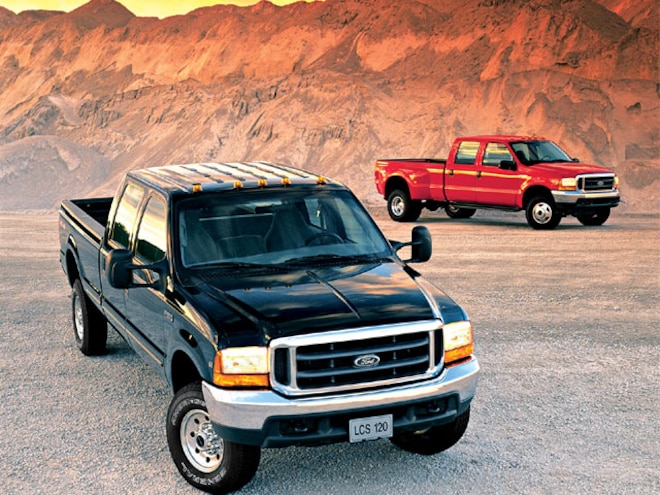 View Photo Gallery | 13 Photos
Photo 4/13   |   Ford introduced both their Super Duty truck lineup and an improved version of the Power Stroke in 1999.
Induction
A traditional journal-bearing turbocharger was used on all first-generation Power Strokes. The turbo also utilized a wastegate. Second-generation engines came equipped with a smaller turbine housing for quicker spool-up times. Air was drawn into the engine via an oval air filter located on the driver side behind one of the batteries.
Fuel System And Induction Changes
Subtle changes in the turbocharger and injection system led to a smoother idling, cooler running engine that increased horsepower to 235 at 2,700 rpm and torque to 500 lb-ft at 1,600 rpm for the '99-00 model years. A calibration change increased output to 275 hp and 525 lb-ft on the '01 models equipped with a manual transmission, while Power Strokes mated to the 4R100 automatics had a 250hp, 505-lb-ft rating.

View Photo Gallery | 13 Photos
Photo 5/13   |   The 7.3L's immense popularity led to the production of nearly 2 million Power Stroke engines from International's Indianapolis plant.
Replacing Displacement: The 6.0l Power Stroke
Although the 7.3L was available as an option for the '03 model year, the 6.0L Power Stroke came on the scene as a modern, technologically advanced engine that, with the use of exhaust gas recirculation (EGR), met new emissions requirements that the 7.3L couldn't. Comprised of an iron block and heads, the 363ci engine differed greatly from the 7.3L. The 6.0L is classified as a "bridge motor" with its overhead four-valve design utilizing bridges to connect both intake valves and exhaust valves together above each cylinder head. The four-bolt per cylinder head design also differed from the 7.3L. The engine's bore and stroke measured 3.74 x 4.13 inches, and its compression ratio was 18:1. The 6.0L's wet weight was 1,005 pounds.
Familiar Fuel System, Advanced Induction
While the 6.0L utilized a Siemens fuel injection system (similar to HEUI) consisting of two oil pumps, the location of the high-pressure oil pump was moved to the rear of the engine under the turbo. The variable geometry turbo (VGT) was controlled electronically, which provides quicker spool-ups and more low-end power than was possible from the 7.3L turbo, allowing the 6.0L some compensation for its lack of cubic inches.

View Photo Gallery | 13 Photos
Photo 6/13   |   The second-generation 7.3L came with an intercooler, a higher flowing high-pressure oil pump, and higher flowing fuel injectors (flowing 120cc as opposed to 90cc on first-generation engines).
Utilization Of EGR
One of the big differences in the third-generation Power Stroke is its use of exhaust gas recirculation to meet tougher emissions standards. Relative to gas engines, the EGR process consists of reintroducing exhaust gases into the intake manifold in order to reduce nitrogen oxide (NOx) deposits into the air. Like most EGR systems, the 6.0L came equipped with an EGR valve as well as an EGR cooler, which was designed to cool returning exhaust temperatures prior to reentry into the intake.
Overall Impression
Certainly not lacking in the power department, the first 6.0Ls put out 325 hp at 3,300 rpm and 560 lb-ft of torque at 2,000 rpm. They were known to leap off the line and build power quicker than the 7.3L. However, when the aftermarket made it possible to add even more juice to these already potent engines, 6.0L owners discovered they were not bulletproof. Early engines were prone to head gasket or EGR cooler failures when subjected to 100-plus horsepower gains or prolonged, extreme towing conditions. The head gasket problems have been blamed on both the engine's four-bolt per cylinder head design and its torque-to-yield head bolts, which are designed to flex in order to keep even pressure on the head gasket. Later versions of the 6.0L proved to be more reliable, experiencing fewer, if any, problems. Torque increased to 570 lb-ft at 2,000 rpm for the '05 model year due to revisions in the engine's electronic control system.

View Photo Gallery | 13 Photos
Photo 7/13   |   Although the 7.3L was an option in Ford Super Dutys for the '03 model year, most customers chose the new, more powerful and advanced 6.0L Power Stroke.
6.4L Compound Turbo
The current Power Stroke option gracing Super Duty engine compartments is the 6.4L four-valve common-rail V-8. The iron block and head engine displace 390 cubic inches, has a compression ratio of 17.5:1, a bore and stroke of 3.87 x 4.13 inches, and a wet weight of 1,130 pounds. The new mill puts out 350 hp at 3,000 rpm and 650 lb-ft at 2,000 rpm. Like the 6.0L before it, the 6.4L Power Stroke utilizes EGR technology, but also features the latest in clean diesel technology: a diesel particulate filter (DPF).
Common-Rail Fuel System And Twin Turbos
The 6.4L features common-rail injection. Fuel is fed to piezo injectors via a high-pressure, rotary-style fuel injection pump located at the rear of the engine. This results in the quietest Power Stroke yet. The induction system consists of two BorgWarner compound turbochargers designed to give the best of both worlds. The first turbo, labeled a high-pressure variable geometry turbocharger, gets the truck moving off the line and at lower rpms, while the second-a fixed-geometry, low-pressure turbocharger-takes over at higher engine speeds. As far as air intake is concerned, for the first time, the Power Stroke's air box sits on the passenger side.
Overall Impression
We were impressed with the new 6.4L's power when we tested it for the May '07 issue, and still continue to be. It is the most technologically advanced Power Stroke to date, as well as the quietest. And despite all of its potential power-robbing, emissions-friendly gadgets, it is the most powerful Power Stroke ever.