From cost to size, here’s why Raptor is the better choice. 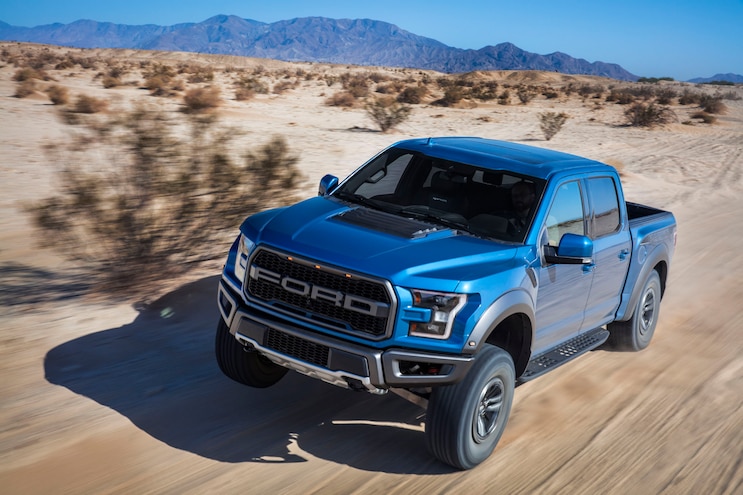 It has been hard to ignore all the internet memes and friendly (and not so friendly) banter that has been flowing between truck fans since Ram introduced the all-new 2021 Ram 1500 TRX. While those who own one of Ford's F-150 Raptor pickups are less than intimidated by the bold TRX, it would seem that Ram fans are enjoying finally being able to belly up to the same table. Afterall, it's been a lonely decade waiting for a formidable Raptor companion.
Now that the dust has settled and we've gotten our laughs from that one scene from a movie from 1993 (scientists don't actually believe a T-rex would have eaten a velociraptor, but we digress), we can move on to the more important things, like looking at the top ten ways that the 2020 Ford F-150 Raptor beats the forthcoming TRX. We'll circle back to this when Ford announces the hotly anticipated 2021 Raptor later this year. 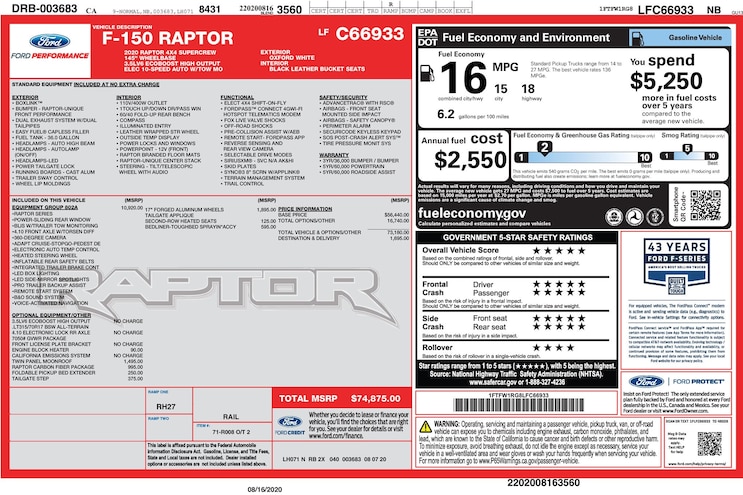 All of us who were watching the TRX announcement live likely had the same gasp when Ram announced that the truck would start at just $71,690 (including destination charge). But it didn't stop there. A fully kitted-out TR2 will come with a price tag of almost $92,000, and if you are lucky enough to snag one of the 702 Launch Edition trucks and check all the option boxes, you'll be staring down a $99,950 half-ton pickup.
By contrast, the 2020 Ford F-150 Raptor SuperCrew starts at just $58,135 and is far from the most expensive truck in the lineup. Fully outfitted, with all of the option boxes checked, a 2020 Raptor will set you back about $78,000. It's still a ton of coin, but it's a far cry from the top-tier TRX. 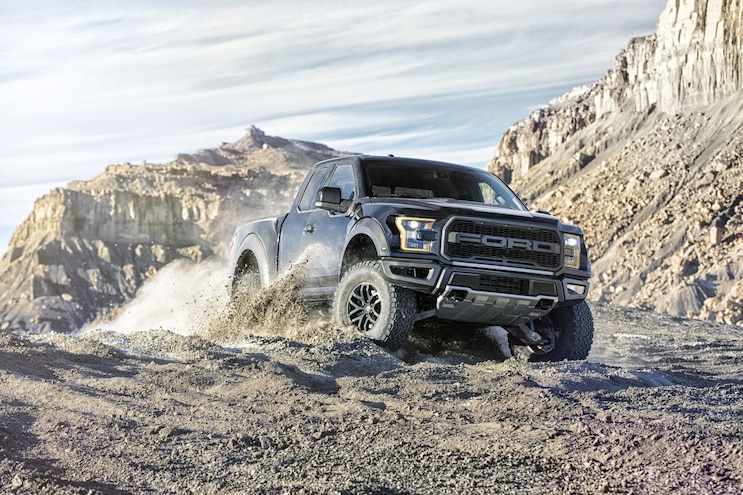 We were a bit surprised to see that the Ram 1500 TRX only comes with an open front differential. Still, it's understandable given the enormous power generated from the 6.2L V-8 engine. The rear axle was upsized to a full-floating Dana 60 to compensate; however, the front is directly from the normal truck.
Ford's F-150 Raptor, however, has had an optional Torsen limited-slip for the front differential since 2012. While the Torsen differential is technically optional, buyers will be hard-pressed to find a truck without one equipped.
Speaking of differentials, we've found an interesting nugget digging through TRX specs. Allegedly, the rear Dana 60 axle is offered with either an open, limited-slip, or electronic locking differential. If true, this would make the rear locker optional. This feature has always been standard on Raptor. We hope for Ram's sake this is a misprint. 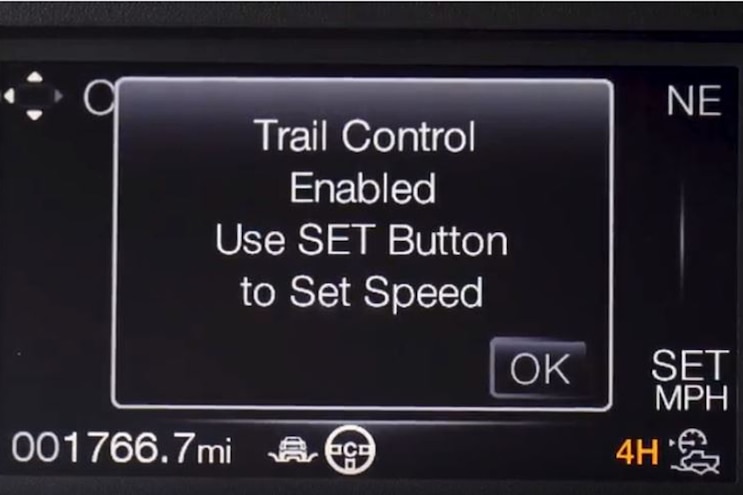 Introduced in 2019, alongside the Fox Live Valve shocks, was Ford's Trail Control system for Raptor. Much like the systems found in Toyota and Land Rover vehicles, Trail Control works as a cruise control of sorts while off-road. When active, the system takes over the acts of working the accelerator and brakes at a preset speed. This allows drivers to focus more on the act of steering. The system is especially useful when descending steep grades or crawling through tight situations. Ram simply doesn't offer a system to match it. 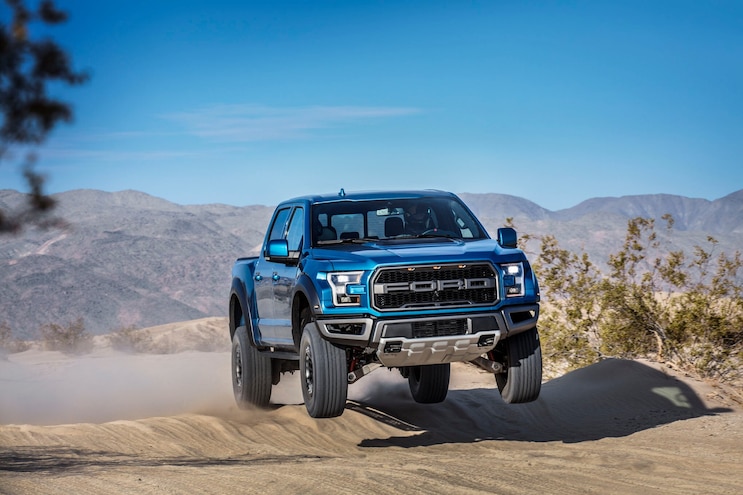 While a lighter curb weight may not seem like much at first glance, there are many reasons why it makes a world of difference. A crew-cab Raptor is said to tip the scales to the tune of 5,697 pounds while the TRX is a bit portlier at 6,350 pounds. The first advantage is power-to-weight. While the TRX has 702 hp versus the Raptor's 450, the Raptor isn't substantially slower in paved 0-60 times. The lighter weight will also help keep wear off of key suspension components and provide for a more nimble driving experience overall. 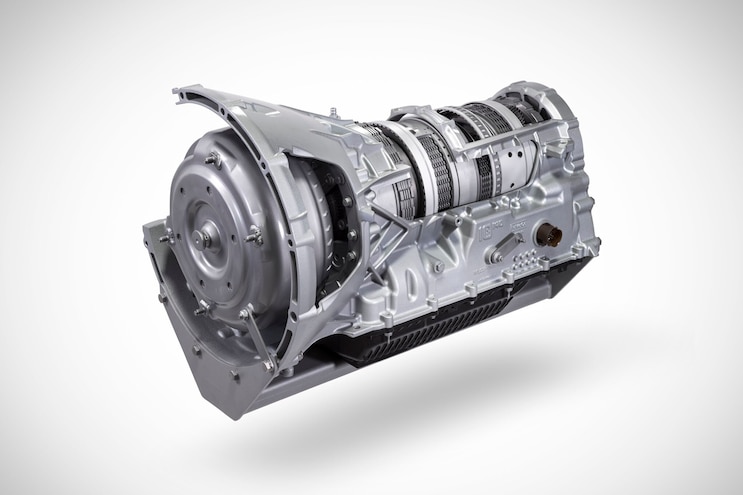 There is absolutely nothing wrong with the robust ZF eight-speed automatic transmission that Ram is using in the TRX. However, Ford backs the Raptor's EcoBoost engine with a 10-speed automatic. And there's nothing wrong with having more gear ratio options. In fact, having more gear options can actually improve the truck's drivability, allowing the lower-horsepower truck to feel just as quick, especially in the dirt. 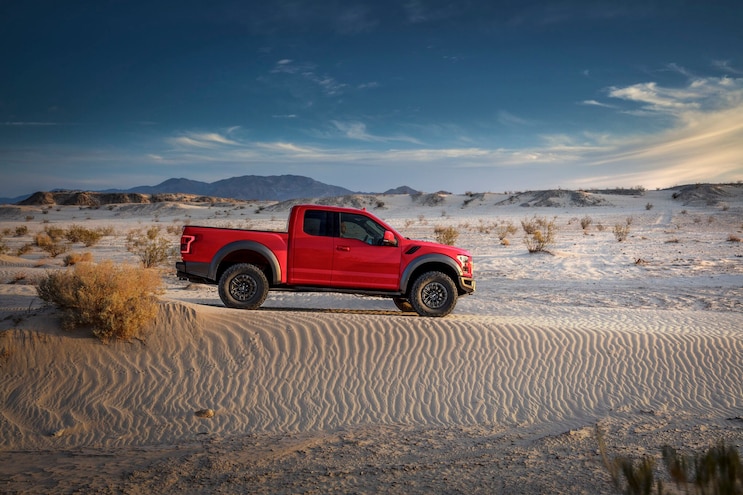 American truck buyers love choice, even if they don't always choose every option (looking at you manual transmission fanatics). While Ram has opted to offer the TRX as only a crew-cab short-bed, Ford offers the Raptor in either SuperCab or SuperCrew configurations. True, most Raptor buyers opt for the larger crew-cab, and Ram may prove the wiser for offering just one configuration, but Ford gets points for offering two different sizes. 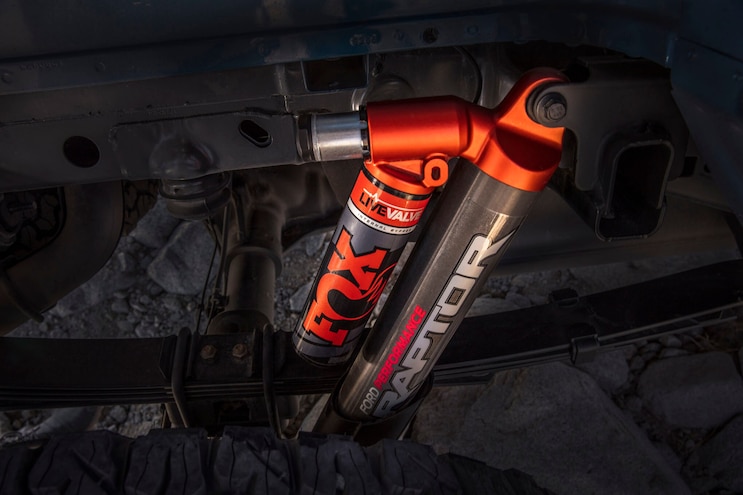 This one is going to start a fight, but the larger shock bodies on the Raptor are arguably a better fit for such a large vehicle. Both the Bilstein Blackhawk e2 dampers on the TRX and Fox Racing LiveValve shocks on the Raptor feature aluminum bodies and electronic damping control. However, the Bilstein shocks use a 2.5-inch body while Raptor's Fox shocks are 3.0-inch units (up from 2.5-inch on the first-generation trucks). While we can debate the damping ability until the cows come home, but it's hard to argue the fact that the larger volume of oil found in the Fox 3.0-inch shocks will be slower to heat up and will resist heat-induced oil degradation and shock fade longer. 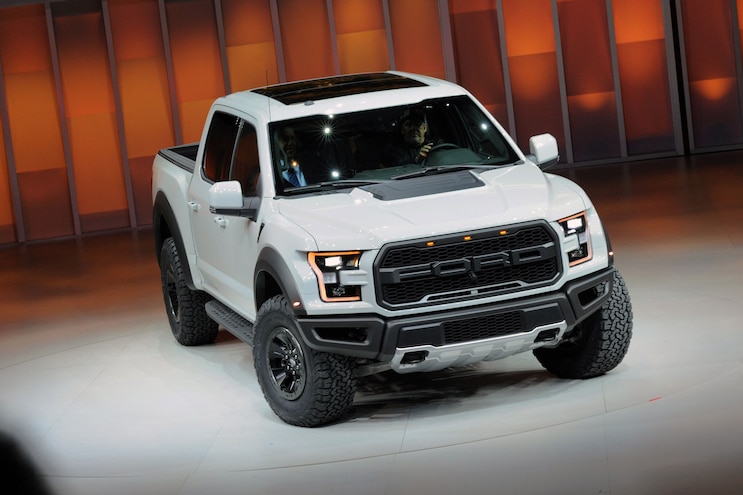 We've already mentioned that the Ford Raptor is nearly 1,000 pounds lighter than the forthcoming Ram 1500 TRX, and that alone will make a huge difference in felt driving dynamics. However, the Raptor is proportionally smaller than the TRX, as well. Raptor is -inch shorter in overall length, 2 inches narrower in overall width, and 2.5 inches shorter than the TRX. Track width is .5 inch narrower, as well. While these numbers may seem small, what they mean in the real world is a truck that's easier to drive and park. At 81 inches tall, there will be more than a few parking garages the TRX won't be able to enter. 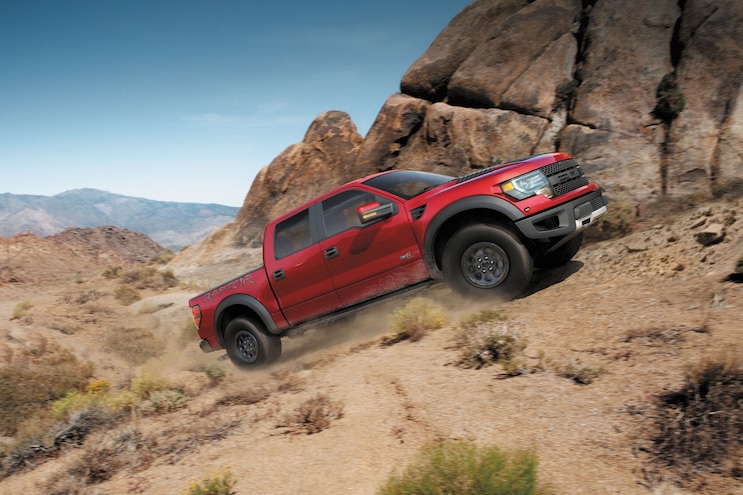 We know Ram has been working on the TRX for a long time. In fact, it's been nearly four years since we saw the first concept truck at the State Fair of Texas. But, while Ram was tinkering in the workshop, Ford had Raptors out in the real world. In fact, Raptor has been in production for more than a decade now (Ford did sit out the 2015 and 2016 model years while the company transitioned to the new aluminum bodied truck). Does this fact alone make Raptor a better truck than the TRX? Of course not. However, it has given Ford tons of real-world data from the hundreds of thousands of trucks on the road that the company has been able to use to improve the product. 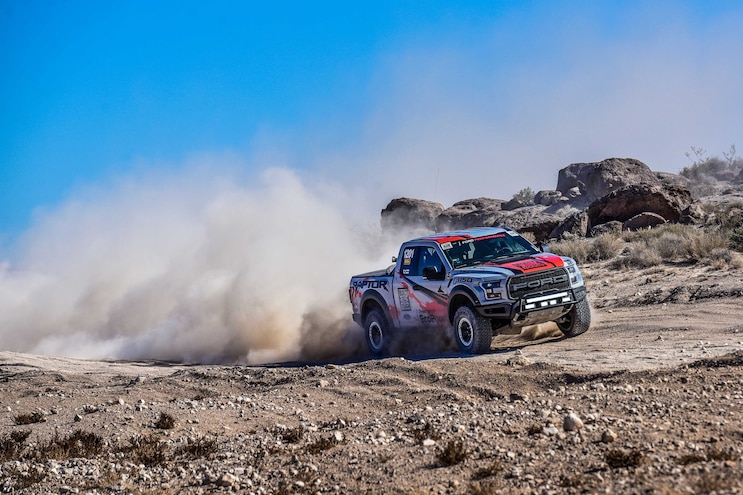 It may seem trivial, but Ford has not only entered a number of grueling off-road races with the Raptor, it's won many of them, as well. From the Baja 1000 to the Mint 400, Ford has been racing with Raptor since even before its public introduction. And it's not just the factory-backed teams, either. Private racers have taken Raptor to such extremes as the Dakar Rally with much success. Will Ram enter a factory-backed TRX in the off-road racing circuit? And will private race teams choose TRX as a base for their next racing endeavor? Hopefully we'll find out soon. 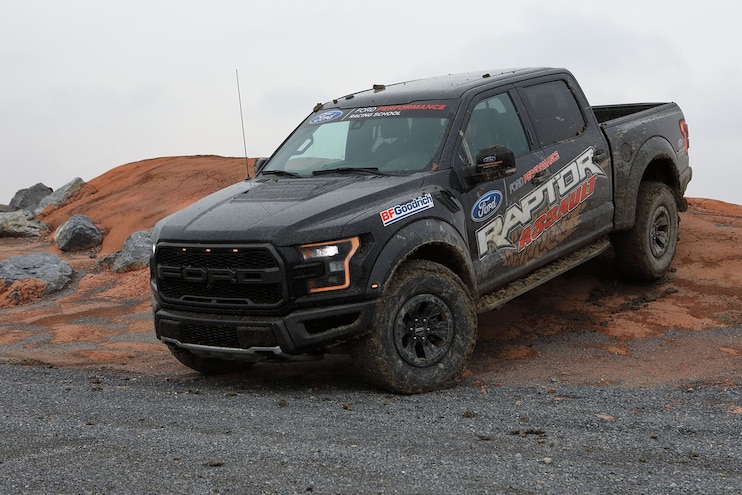 Own a 2019 or 2020 Ford F-150 Raptor? Well you're in luck! Owners are invited to attend the Ford Performance Raptor Assault driving school absolutely free. Well, not absolutely free, you'll still need to get yourself to the program facility outside Salt Lake City, Utah. This two-day program combines classroom time with off-road driving to help new owners get used to all their Raptor has to offer. And best of all, you don't even need to bring your Raptor, they'll provide one for you.