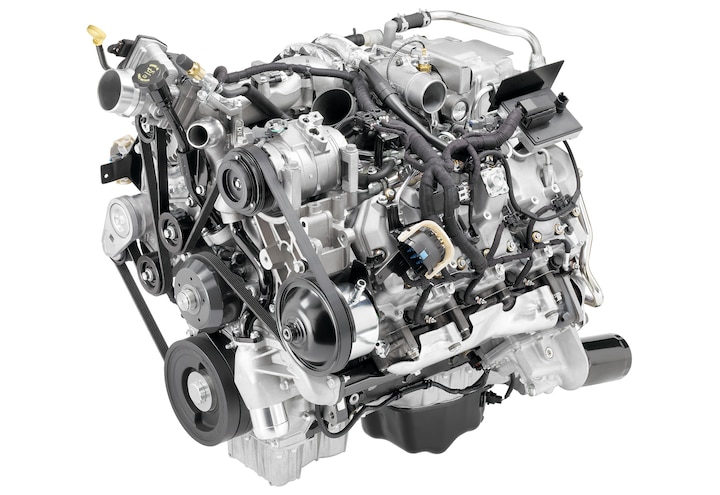 Automotive manufacturing history includes two brutal horsepower wars. The first involved gasoline engines and started when the GI's returned home from WWII. It ended with the 1973 oil crisis. This oil embargo gave birth to the next slow-starting and fierce-ending feud, which we are all veterans of-the diesel horsepower wars. Notice how power levels have recently leveled off? It's because in 2010, manufacturers need to address what's coming out the tailpipe just as much as they have to worry about what numbers the engine makes. Since we're optimistic and believe the past is a guide, we predict we'll see the emissions restrictions turn into a catalyst for better performing diesel engines. Fortunately for us, a world without problems is a very boring place for engineers.
View Photo Gallery | 4 Photos
Photo 2/4   |   2011 LML Duramax Diesel Engine 2011 Chevy Silverado 3500 HD
The LML Duramax
The '11 diesel pickups built by GM will use the same basic 6.6L engine GM has been using for the last decade. This signifies the original Duramax engine's design was a good foundation-one the engineers didn't need to totally change as we predicted with the 6.9L UMAX ("Detroit Spy Report," April '07). Still, stricter future emissions requirements are putting more pressure on the industry to improve the cleanliness of diesel exhaust without giving up power. The rest of this article highlights the new features on the '11 Duramax trucks that enable squeaky-clean diesel. Only the future knows for sure whether the new emissions pressure will crush the diesel market into a cube- or a diamond.
View Photo Gallery | 4 Photos
Photo 3/4   |   The '11 Silverado and Sierra will see a larger opening in the front bumper. This modification provides more airflow, and more cooling for the new EGR system and transmission heat exchanger. Sources say the new EGR system will have a high- and low-temperature loop, providing an increased flow rate and a larger window of opportunity for introducing oxygen-depleted exhaust gas back into the engine. The dead air cools the cylinder and reduces nitrogen oxide (NOx) emissions.
* Coming down the pipe for the '11 Silverado and Sierra should be larger-diameter brakes. We expect 13- to 14-inch rotors.
* The torsion bar front suspension has been retained but features more load capacity.
* 1480 U-joints will be used to handle increased cargo andtowing capacities.
* The AAM 11 1/2-inch ring gear rear axle will be carried over.
* The body and interior stayed the same, but the chassis has been redesigned in order to increase the gross vehicle weight rating (GVWR).
* The '11 Duramax traded its slower solenoid injectors for quicker opening and closing piezo units. The common-rail fuel system sprays diesel up to 29,000 psi inside the combustion chamber.
* The '11 Duramax incorporates urea injection, or as GM calls it, diesel exhaust fluid (DEF). Bells and flashing lights indicate when the DEF needs to be refilled. If the tank goes empty, the truck is sent into limp mode.
View Photo Gallery | 4 Photos
Photo 4/4   |   2011 LML Duramax Diesel Engine side Angle
* GM added a ninth injector after the turbo to supply the fuel needed to create heat that will burn off the emissions built up in the exhaust aftertreatment system. A major benefit of this new system includes not having to deal with oil dilution, which results from biodiesel or regular diesel going past the piston rings and getting into the crankcase. In addition, fuel economy should improve with this more precise setup. Biodiesel compatible fuel lines, an additional heating element in the fuel system, and the latest generation coalescing filter bump the engine's biodiesel rating from B5 to B20.
DURAMAX ENGINE HISTORY
Years - Code - Major Differences
2001-2004 - LB7 - Injectors housed inside valve covers and no EGR, with the exception of California models
2004-2006 - LLY - Introduction of Garrett VGT turbo and EGR
2006-2007 - LBZ - Revised piston design lowered compression ratio to 16.8:1 from 17.5:1, a stronger block debuted, and a 32-bit ECU was introduced
2007-2010 - LMM - Introduction of DPF and exhaust aftertreatment
2011 - LML - Extra fuel injector placed behind turbo, urea injection, and dual-loop EGR system
2011 - LGH - Detuned version for 2500 and 3500 vans and will use GM's 6L90 six-speed transmission instead of the Allison 1000