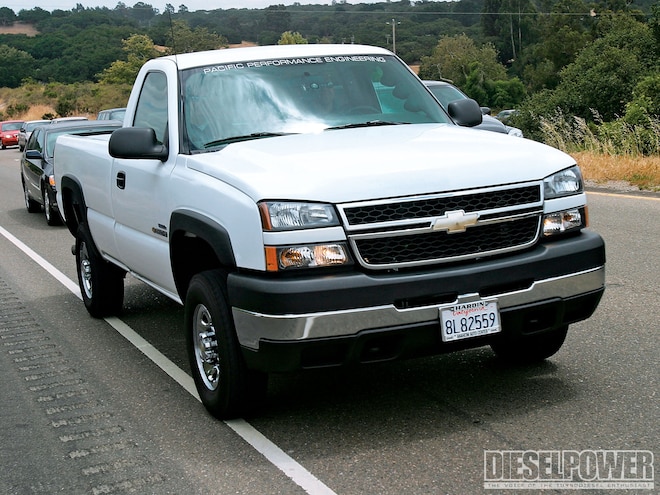 Back in 2001, GM retired its 19-year-old indirect- injection (IDI) 6.5L diesel and replaced it with the all-new 6.6L Duramax diesel. At the time, the new Duramax represented a paradigm shift in diesel technology. It was the first diesel engine sold in an American pickup to offer common-rail injection, the first to be fitted with aluminum heads, and the first to be mated to a medium-duty truck transmission. Fast-forward to today, and the Duramax engine has become a powerful force in the diesel-performance world. A Duramax-powered truck has won Diesel Power Challenge three times, and a Duramax finished Second Place in last year's challenge. It is now common to see diesel Chevrolets and GMCs making 400 to 500 rear-wheel horsepower, while still giving their drivers 20-mpg daily driven capability.
View Photo Gallery | 9 Photos
Photo 2/9   |   duramax Power Recipes diesel Fumes
The General's Pros and Cons GM trucks are lighter than their Ford and Dodge counterparts, and their independent front suspension tends to give them a superior ride. If you tow, a Duramax-powered rig can be your best friend, thanks to the Allison transmission that comes behind it. If you plan on drag racing or sled pulling, however, the Allison will need some serious work, as adding any more than 90 to 120 rear-wheel horsepower, and you'll be skating on thin ice. With all this in mind, let's take a look at some power combinations we've witnessed work on $1,500, $2,500, $5,000, and $10,000 budgets.
Chevrolet and GMC trucks powered by the 6.6L Duramax engine have become a force in diesel performance. Last year, Matt Gainer (opposite page) was tied for the lead in the Diesel Power Challenge before a unit bearing took him out during the 150-mile ride and drive competition. EFILive (above) allows customers to share and download custom performance tunes for their Duramax diesels. It can also be used as a diagnostic tool to troubleshoot rough-running engines.
View Photo Gallery | 9 Photos
Photo 3/9   |   duramax Power Recipes tuning
There's a massive amount of power potential in the 6.6L Duramax engine. The 1,300hp engine in Buck Spruill's race truck (pictured) shares the same block, heads, and crankshaft with the factory 365hp LBZ version.

View Photo Gallery | 9 Photos
Photo 4/9   |   duramax Power Recipes duramax Power Potential
For the plug-and-play crowd, Banks Power offers a Six-Gun tuner that is clean and powerful and even carries an E.O. number for 50-state use on '01 to '03 Duramax-equipped trucks.