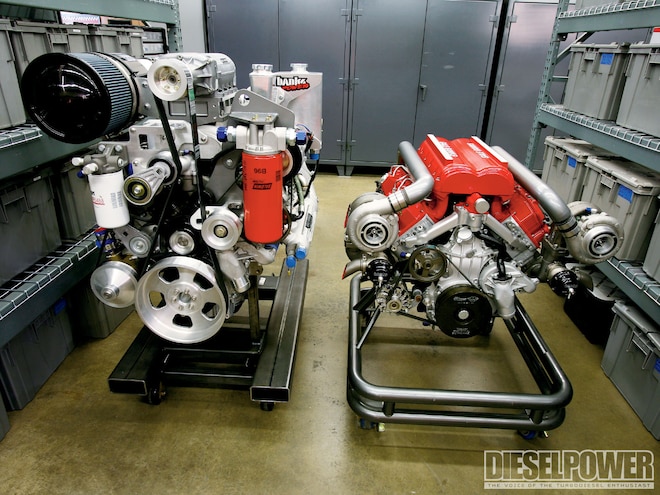 Diesel engines are at their best when the conditions they have to perform in are at their worst. They thrive on hard work, heavy loads, and continuous use-so it's no surprise that diesels are the powerplant of choice in the trucking, mining, and marine worlds.
View Photo Gallery | 15 Photos
Photo 2/15   |   We know you're asking yourself, "Can I fit that supercharged engine on the left into in my pickup?" The answer is "No." But you could bolt the twin-turbo'd version on the right into your next hot rod.
Traditionally, diesel-powered boats (less than 50 feet in length) use engines based on over-the-road diesels that you're likely familiar with. In fact, almost all the big-name diesel engine manufacturers offer marinized versions of their popular truck engines to propel or generate electricity for boats. The one notable exception to this rule is International.
Marine Diesel Engines
Caterpillar alone sells more than 15 different marinized diesel engines. John Deere also configures most of its farm implement engines for ocean-going use. Cummins partners with MerCruiser (on engines less than 15.0L) to offer its inline diesel engines for boats, and it seems like nearly every boat we've seen has a Cummins Onan generator.
View Photo Gallery | 15 Photos
Photo 3/15   |   In many ways, the Duramax SuperTurbo engine is a culmination of Gale Banks' lifework. Gale Banks' (shown here standing to the right of California State Senator Bob Huff) SuperTurbo features almost all the technologies his company is known for: twin turbos, diesel, large-displacement GM V-8 architecture, sophisticated engine controls, and implementation of state-of-the-art technology.
It would be fair to say that, in most cases, a diesel engine manufacturer will prove out a new engine architecture in heavy-duty trucks first, and then once all the bugs are worked out, that engine will be upgraded to handle the rigors of marine use. Manufacturers can also use the marine industry to extend the lifespan of an engine, because after it's no longer cost-effective to upgrade an engine to the latest on-highway emissions standards, boat builders can still install them (due to slightly less restrictive emissions laws) and get a proven diesel package.
Gale Banks: Land and Sea
Banks Power is a brand known throughout the diesel industry, but it may come as a surprise to some of you that Gale Banks has had an equally long career in the marine engine world. Granted, much of his company's boating background is with twin-turbocharged big-block race engines, but Banks' gas and diesel designs have also found their way into some very specialized engines for the Navy.
In 2002, Banks developed a 5.9L Cummins engine fitted with twin turbos, an air-to-water intercooler, and a compacted-graphite iron block for a SEAL Team fast-attack boat. This 700hp marine engine was built at the same time as Banks' Bonneville-record-setting Cummins-powered Dodge Dakota. The technology sharing between the land speed racing program and the marine engine developed for the SEAL Team led to performance parts like the Banks Big Hoss intake manifold for the common-rail Cummins.
View Photo Gallery | 15 Photos
Photo 4/15   |   The primary application for the Banks SuperTurbo Duramax engine is confidential, but based on the performance characteristics of the engine, it is likely to be used in a fast-attack speedboat for the U.S. Military. Other applications are sure to follow. This rigid inflatable boat (RIB), used by the Maritime Security Squadron Forward supporting Commander Task Force 158.1 in the Persian Gulf, would be the perfect home for a pair of the Banks SuperTurbo engines.
SuperTurbo Parts For Your Project

GM Powertrain, Banks, and Bosch
While Banks' land-based diesel accomplishments are well known to the masses, its success on the high seas did not go unnoticed by General Motors. So in 2008, when GM Powertrain was looking for a partner to marinize its light-duty diesel engine, Banks became the factory-authorized marine-engine supplier of the 6.6L Duramax.
View Photo Gallery | 15 Photos
Photo 10/15   |   The SuperTurbo engine development actually began on the street, er, track. Banks' motorsport team has been testing the Duramax platform's durability for years using its drag racing pickup and new dragster. In fact, we wouldn't be surprised if the dragster's green 7.0L Duramax engine ended up in the Navy's next boat project.
Some of you are no doubt thinking, "Couldn't GM just marinize the Duramax itself?" Perhaps it could, but with more than a century of experience building automobiles, GM's business is optimized to engineer, sell, and service millions of cars and trucks each year. Banks Marine division, on the other hand, has the flexibility to tailor the Duramax engine to suit an individual boat builers' needs. And thanks to its long-term relationship with Bosch, Banks has been developing its own OttoMind version of the Bosch EDC16 ECU in order to run a common-rail diesel engine in any application it chooses.
The base 6.6L Duramax engines Banks uses for its marine program are built in the Dmax plant in Moraine, Ohio. These production-based engines (some of the engine crates we saw actually have the engine code GBE for "Gale Banks Engineering") are sold to Banks through GM's Powertrain division. From there, the Banks Marine group takes delivery of the engines and installs marine-grade hardware to suit the application and power output (300 to 800hp versions are available) needs of the customer.
View Photo Gallery | 15 Photos
Photo 11/15   |   Eaton's largest R2300 TVS supercharger is fitted to supply enough air to create 808 lb-ft at only 1,200 rpm. The supercharger compresses the intake air and sends it to a pair of BorgWarner turbos which then feed the Banks air-to-water intercooled intake manifold.
The SuperTurbo Engine
As power junkies, we're most interested in the 800hp configuration of the Banks Duramax marine engine, known simply as the SuperTurbo. This engine is being developed for a military contractor that supplies boats to the U.S. Military.
The SuperTurbo marine engine wasn't dreamt up overnight, rather it was born as part of a unified Duramax program. The first phase of development began when the Banks Power group started engineering Duramax performance parts for the '01 GM pickups. Phase two of its program came with the birth of Banks' Duramax motorsports effort, and the creation of the Banks Type-R Duramax road racing GMC pickup in 2005. However, since the domestic diesel market seemed much more interested in drag racing, Banks shifted its attention and built a Chevy S-10 Pro Stock pickup to put the Banks Type-R road racing engine in. After years of development and multiple 7-second passes with the S-10, the Banks team has built a 7.0L Duramax-powered rear-engine dragster. And we wouldn't be surprised if the Banks Top Diesel dragster showed up at a race with a supercharger (or two) on top of the intake!
What's A Duramax Crate Engine Going To Cost?
We can attest to the fact that Banks has literally dozens of Duramax engines in stock, and because everybody that works at its Azusa, California, headquarters are car guys-it was only a matter of time till they put together this hot rod crate engine concept. Banks would love to sell you one for your muscle car or race vehicle, with what New Business and Market Development Manager, John Espino, refers to as a "mission-specific build and calibration." But the costs of developing such a package are still quite high considering all of the variables. Try as we might we couldn't get Banks to commit to a firm price.
View Photo Gallery | 15 Photos
Photo 12/15   |   1009dp 800hp Twin Turbo Duramax Crate Engine duramax Crate Engine Side