The electric DPF may be the next big thing in diesel 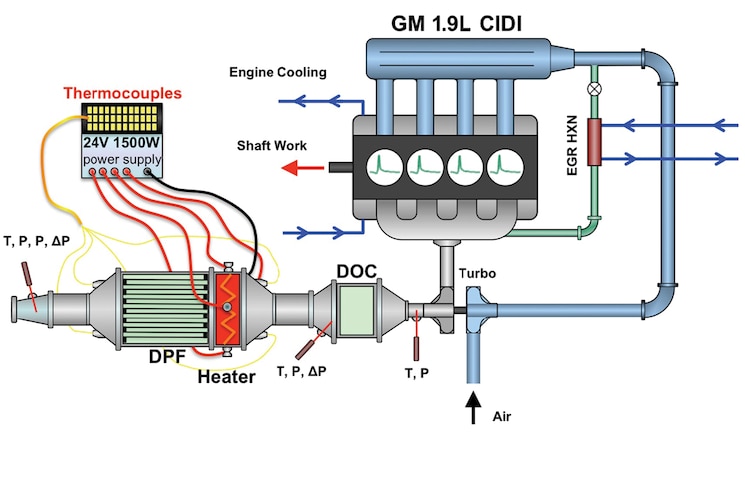 General Motors has been hard at work developing an aftertreatment system that incorporates an electrically heated diesel particulate filter. According to GM, this technology promises to cut the “fuel penalty” of current DPF/regeneration systems by 50 percent. The electrically assisted DPF (or EADPF) works in conjunction with a traditional diesel oxidation catalyst (DOC), and selective catalytic reduction (SCR, or urea injection). Initial tests were performed on a four-cylinder 1.9L Fiat/GM diesel, but data shows the system should work just as well on V-6 and V-8 engines.
From time to time, we like to search public records for diesel-related inventions. In the December ’06 issue of Diesel Power (“Sneak Peek—New Cummins V-6 and V-8 Diesel Engines”), we found papers that revealed Cummins was participating in a program to develop diesel engines for ½-ton pickups. Now, we know that work led to the development of the 5.0L V-8 Cummins that will debut in the next generations of the Nissan Titan, and possibly even the Toyota Tundra.
Now we’ve discovered, through the U.S. Department of Energy, patents for inventions related to an electrically heated diesel particulate filter (DPF). This sent our minds spinning with the endless possibilities of what this innovation could mean for the future of diesel vehicles here in the U.S. The patents we found are owned by General Motors and are related to a joint program the company has been running with Oak Ridge National Laboratory. The project’s main goal is to develop the materials, processing methods, and DPF regeneration techniques that would greatly reduce the “fuel economy penalty” in modern diesel vehicles. 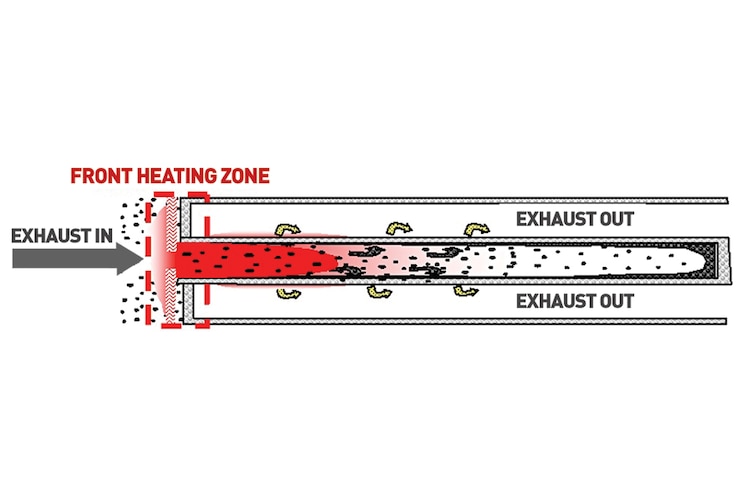 View Photo Gallery | 11 Photos
Photo 2/11   |   The EADPF uses electrical heating grids inside the inlet of the DPF that warm the exhaust flow to more than 1,100 degrees and ignite the trapped soot. The heater segments run for just 1 to 2 minutes, which starts a cascading effect, during which the rest of the soot continues to burn off without the need for further assistance.
The DPF Era
Not long after the introduction of common-rail engines ushered in the diesel horsepower wars, the EPA dramatically raised emissions standards. This led to the need for diesel particulate filters, which work great at trapping soot but require extreme heat to burn off those trapped particles. The current DPF setups on diesel trucks require extra fuel to perform a regeneration (soot cleaning) cycle. In order to create the heat needed to do this, extra fuel is burned, which lowers a truck’s overall fuel economy. The new method shown here uses electricity instead of diesel to raise the temperature inside the DPF.
The New EADPF
Early patents from 2009 pointed to experiments using microwaves to heat the exhaust flow, but that method appears to have been shelved in favor of a design employing more conventional resistive metallic heating grids inside the inlet of the DPF. The electrically assisted diesel particulate filter (or EADPF as it is called in the patent materials) proved to be a success and was capable of raising the temperature inside the DPF to more than 1,100 degrees in just 1 to 2 minutes. Initial development of the system was conducted using a four-cylinder 1.9L CDTI Fiat/GM engine that produced some impressive results, but the developers believe the same technology can be scaled up for use on V-6 and V-8 engines. This means diesel powerplants could someday be found in GM vehicles ranging from the subcompact Chevrolet Spark all the way up to the fullsize Suburban, Tahoe, Yukon, and Escalade SUVs.
“An electric heater is disposed upstream of the DPF and selectively heats the exhaust to initiate combustion of the particulates within the exhaust as it passes therethrough. Heat generated by combustion of the particulates induces combustion of particulates within the DPF.” — U.S. Patent 8,615,988 B2. Dec. 31, 2013 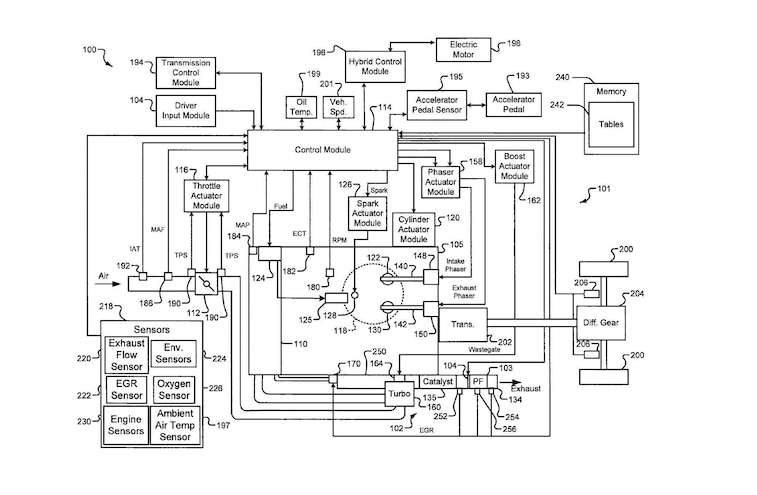 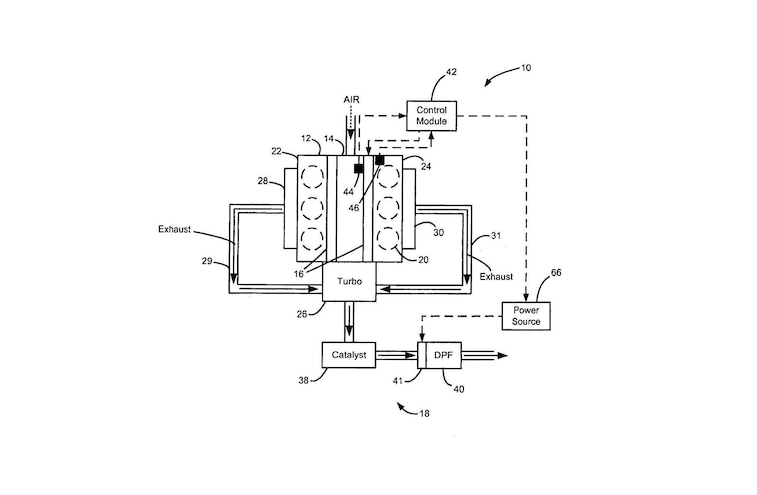 View Photo Gallery | 11 Photos
Photo 7/11   |   The latest patents for the EADPF show a V-6 engine in the diagrams but emphasize that this exhaust treatment technique may be used on engines with any number of cylinders, from 2 to 16. With the drastic reduction of the “fuel penalty,” we are hoping to see multiple diesel options for vehicles such as the fullsize Chevrolet Silverado 1500 and the midsize GMC Canyon.
Diesel-Electric Hybrids on the Horizon
One of the most interesting patents related to the EADPF developments shows how it can be used in a hybrid-electric configuration. The EADPF design can easily be adapted for use with future diesel technologies such as homogeneous charge compression ignition (HCCI), spark-assisted compression, and automatic start/stop functions. By greatly reducing the “fuel penalty” and improving the functionality and efficiency of the traditional DPF, the engineers at GM working on the EADPF appear to be taking big steps toward making diesel the fuel of the future for hybrids here in the U.S. This could mean the return of the Chevrolet Silverado/GMC Sierra 1500 hybrid pickups, a diesel-powered Chevrolet Volt/Cadillac ELR plug-in hybrid, a Chevrolet Cruze diesel-electric hybrid, a Cadillac CTS diesel-hybrid, or even a diesel-electric-powered Chevrolet Colorado/GMC Canyon. That’s just a start. We bet you can think of more GM vehicles that would be better with a diesel under the hood, and it looks like the EADPF is going to help make that possible.
The EADPF uses electrical heating grids inside the inlet of the DPF that warm the exhaust flow to more than 1,100 degrees and ignite the trapped soot. The heater segments run for just 1 to 2 minutes, which starts a cascading effect, during which the rest of the soot continues to burn off without the need for further assistance. 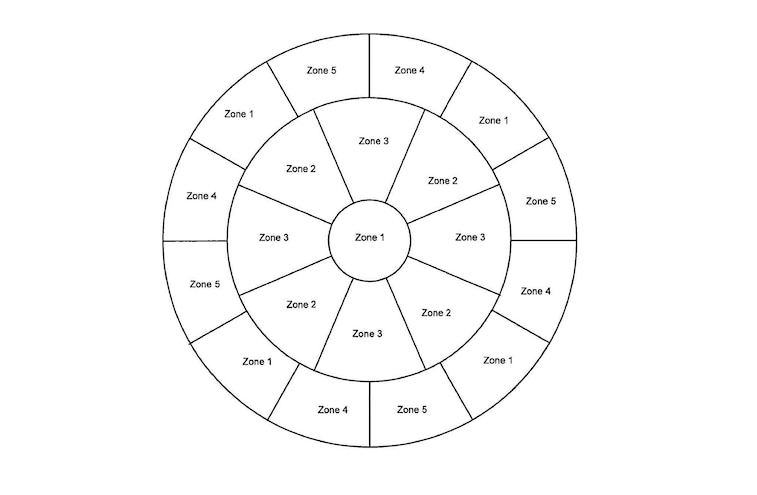 View Photo Gallery | 11 Photos
Photo 11/11   |   The most recent EADPF design is able to heat individual sections of the filter as they become clogged. This targeted regeneration method is more efficient than simply heating the entire DPF and also helps reduce wear and tear on the exhaust components. As you can see in this diagram, different heat zones exist within the DPF inlet. According to the wording on the current patent, “Each zone is energized exclusive of the other zones. The energized zone heats a portion of the accumulated soot to its combustion temperature. Once the soot ignites then the zone can be turned off…the zone-heated DPF can use less electrical energy and provide improved fuel economy over other types of heated DPFs.”
“An electrically heated DPF may be regenerated in less than 5 minutes, compared to 20 to 30 minutes for exhaust-heated regeneration techniques, such as post fuel injection techniques.” — U.S. Patent 8,347,607 B2. Jan. 8, 2013