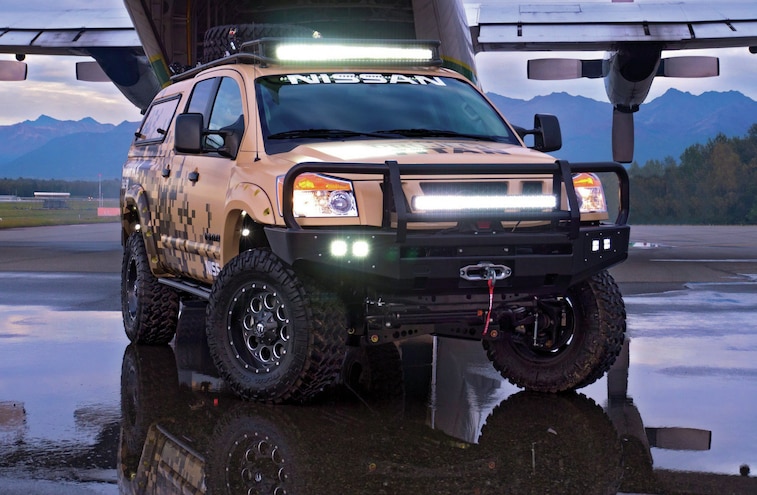 Hot on the heels of what Nissan claims is the first “crowdsourced” custom car, 2012’s Project 370Z, the company extended the idea into the off-road sector with Project Titan, based on a ’14 Titan PRO-4X Crew Cab. Starting with an already solid foundation and featuring the truck’s stock skid plates, front and rear Dana axles, and electronic locking rear differential, Project Titan was set to be a pretty impressive truck, regardless of what the fans chose.
Similar to Project 370Z, fans of the Nissan Trucks Facebook page were presented with a few options for each truck modification and could vote on which they thought would be best for Project Titan, which the company said would be “the ultimate off-road capable fullsize truck” when it was completed. Fans voted on the suspension, wheel-and-tire combination, lighting package, and exterior upgrades.

"You can’t get help unless you ask for help, and Wounded Warrior Project did that for me"

However, unlike Project 370Z, Nissan had a very special reason for building a custom Titan. Two months after announcing the project, the company said that it would be partnering with the Wounded Warrior Project (WWP) for the special truck. To honor those brave Americans who have served since the September 11 tragedies, Nissan asked America to help build a custom truck to take two WWP vets on an Alaskan adventure. The expedition is chronicled in the short film Project Titan that premiered on the History2 Channel on Veterans Day 2014. The film can still be viewed on Nissan’s YouTube channel. According to Nissan, the project was designed to raise awareness for WWP, an organization that provides support and empowerment to servicemen and women returning from combat duty. 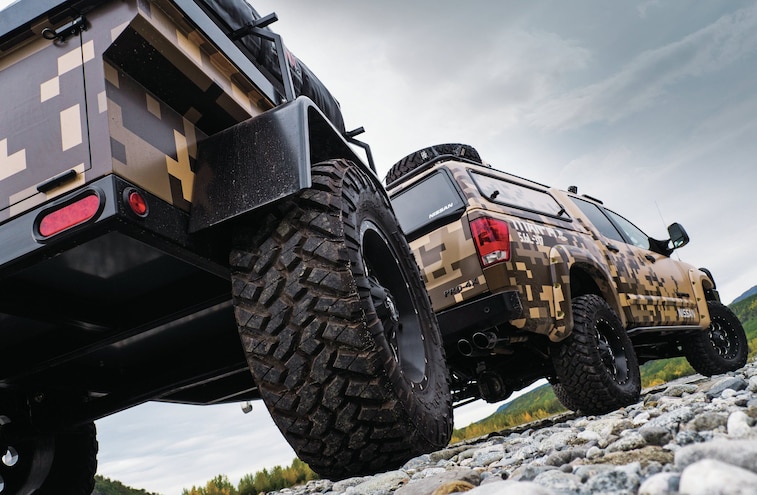 View Photo Gallery | 14 Photos
Photo 2/14   |   Project Titan
Visible and Invisible Wounds
Both Guzman and McMahon understand WWP’s healing effect well. Guzman was deployed to Iraq in 2004 where he worked as a convoy escort, which involved many reconnaissance escort missions under the cover of night. On one such mission, a roadside bomb damaged Guzman’s vehicle, and he suffered injuries to his leg, wrist, and mouth.
“When I looked down, I saw my leg was just gushing out blood, and I blacked out,” Guzman said. He woke up two days later in a hospital in Baghdad, and after developing gangrene, was sent home. There, he found WWP.
“You can’t get help unless you ask for help, and Wounded Warrior Project did that for me,” he said. “It felt good to bond with other wounded warriors in the sense that I wasn’t the only one.”
McMahon had a similar experience upon returning home from active duty as an Army colonel.
“When I got back, everything just started falling apart, everything,” McMahon said. “I didn’t have a lot to do with my life, and I found myself in a pretty bad way, but I realized I wasn’t alone in some of the crap I was going through and dealing with.”
One of McMahon’s friends took him to a WWP event, where McMahon was able to make a near-instant bond of friendship with people who genuinely cared about today’s veterans. 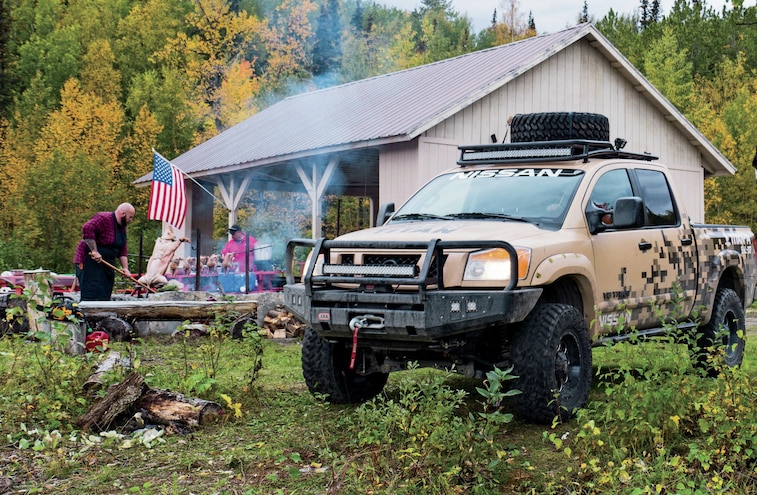 View Photo Gallery | 14 Photos
Photo 3/14   |   The Titan’s 317hp V-8 and extensive camping and off-roading provisions helped the Wounded Warriors get where they needed to be.
Project Titan, the film
On their expedition with Project Titan, Guzman and McMahon encountered many people who had close ties with WWP and the veteran community, including adventure photographer Cory Richards, fellow veteran Chris Kendrick, and WWP supporter Chef Evan Funke. While on the adventure with Project Titan, Richards shares that after he was diagnosed with post-traumatic stress disorder after nearly dying in an avalanche while on a photo expedition, Wounded Warriors expressed nothing but empathy and caring for their shared struggles with PTSD.
Later on the journey, Guzman and McMahon deliver a brand-new set of outboard motors to Kendrick, who runs a fishing company that takes disabled vets out on the Alaska water for some fishing.
“One of the biggest hoots I get in life is watching somebody catch a fish who thought he was out of the game,” Kendrick said. “We go out there and get a bluebird day, and he brings in a fish and it’s laying there, and he’s like, ‘Wow,’ and that does it for me.”
The final portion of their adventure included Funke and a group of vets volunteering on what’s known as “Red Shirt Friday.” Each Friday, citizens and veterans alike choose to wear red shirts to help them Remember Every Deployed. In the segment, Funke and Guzman prepare a roast pork-and-stew meal while McMahon helps the veterans clear land for a local organization. Funke, Guzman, and McMahon each reflect on the value of working alongside others, tying back to the importance of WWP in giving veterans and citizens the chance to help each other heal. 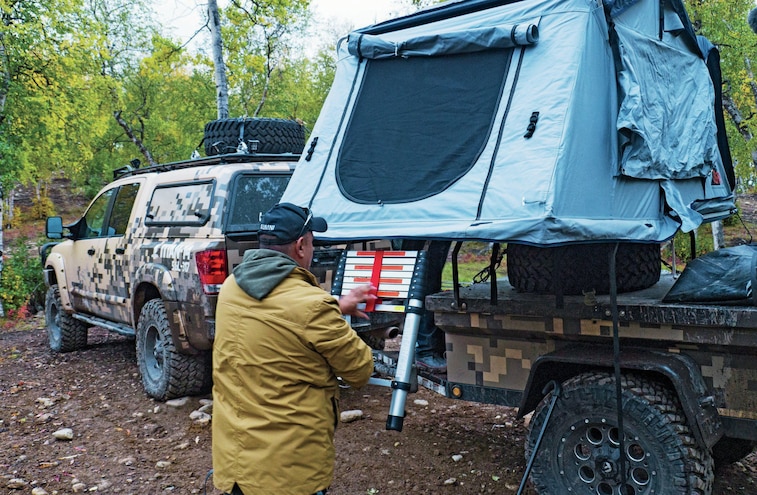 View Photo Gallery | 14 Photos
Photo 4/14   |   Project Titan With Trailer Tent Setup
The Truck Behind the Project
Following the expedition, the modified truck was revealed to the public live at the State Fair of Texas, where it was very well received. It also made an appearance at the Houston Salutes American Heroes Veterans Day Parade in Houston, Texas.
Project Titan was a success. Not only did it reignite interest in the Titan truck, it also brought the challenges facing wounded service members to the nation’s attention. Guzman and McMahon’s journey was immortalized in the short film, which urged viewers to consider donating time or money to WWP. Project Titan (and the story behind it) is humbling, and we commend Nissan for taking this route with it, choosing to raise awareness for a good cause in addition to building excitement for an awesome truck. 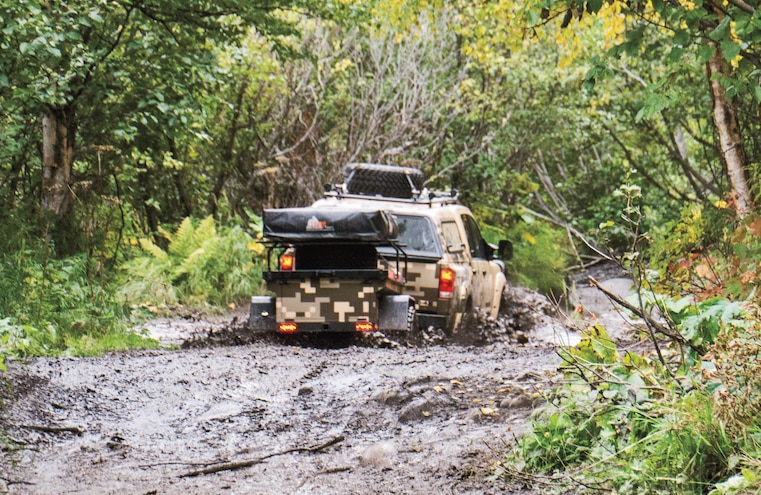