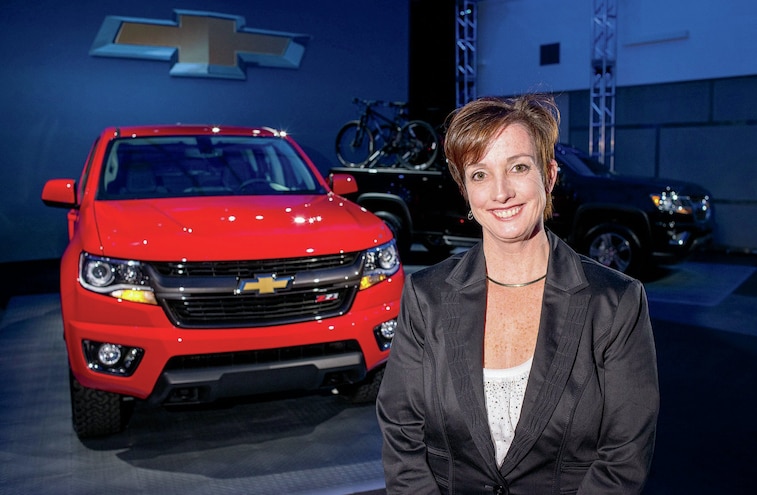 Anita Burke grew up in the Chicago suburb of Skokie, Illinois, and graduated from Chicago’s Illinois Institute of Technology with a bachelor’s degree in mechanical engineering. She later earned a master’s degree in engineering from the University of Michigan.
She was good at math and science in high school, but she had no engineering aspirations until her older brother decided to pursue electrical engineering, and a chemistry teacher encouraged her to give engineering some thought. She did and ended up at IIT.
The program there included two cooperative work sessions at GE’s manufacturing facilities and one in engineering design with Kraft General Foods. Burke had no thought of a car-biz career until GM invited her to interview at its Milford, Michigan, Proving Grounds.
“Within 15 minutes of setting foot on that property and having a discussion with an engineer, I knew that’s where I wanted to work,” she relates. “That is the most exciting part of our process of developing vehicles, and it really clicked with me in terms of all the different things you could do within this company. I just knew it was where I wanted to be, and if they offered me a position, it would be my first choice. I haven’t been disappointed.”
From her first job in 1991 as a wheel engineer at Milford, she moved to vehicle and tire dynamics, then body structure, then was promoted to engineering manager at GM de Mexico in Toluca, Mexico. Three years later, she was back at Milford as a fullsize truck vehicle performance manager. In 2008, she was promoted to director of Aftersales Engineering for GM’s Latin America, Middle East, and Africa Region. In 2010, another promotion sent Burke to GM’s South America Engineering Center as Vehicle Chief Engineer for the international-market Colorado, and the following year, she took on the challenge of transitioning the midsize pickup program from there to the North American Engineering Center, in Warren, Michigan. 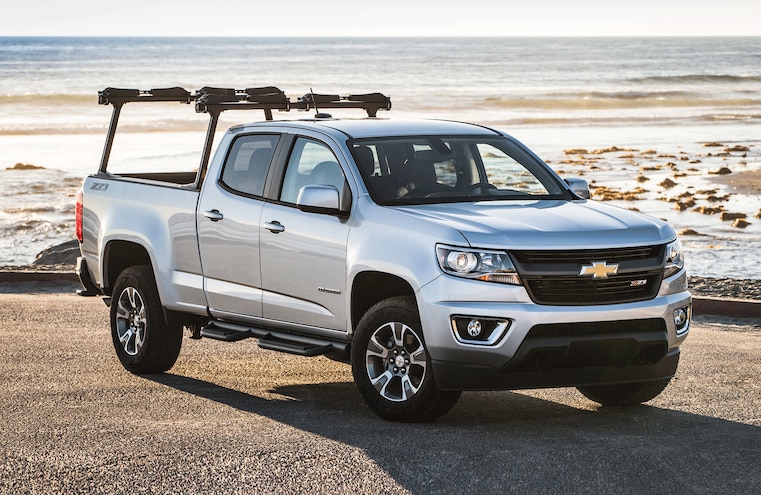 View Photo Gallery | 4 Photos
Photo 2/4   |   2015 Chevy Colorado
TT: What is your product philosophy?
AB: Thinking of customers first, putting yourself in their shoes, and seeing things from their perspective. Always keeping in mind what customers want and deserve and meeting their needs.
Why has GM invested in new midsize pickups?
Not all customers need fullsize-truck capabilities, but midsize trucks didn’t have the styling, fuel economy, refinement, features, or amenities they wanted. This has long been a neglected segment. So we reinvented the midsize truck, sweating every detail, with fuel economy a major factor in every decision. We also focused on refinement, a quiet interior, and features customers expect and deserve. They also need pickup capabilities and functionality, so payload, towing, and bed functionality were also key. We are segment leading in fuel economy, cabin quietness, payload and trailering. We have over 6,700 pounds of tow capability.

"the only thing better than how they look is how they drive and perform."

Are garageability, maneuverability, and parkability important?
Absolutely. Those are key attributes in this segment.
What about ride and handling dynamics?
Their dynamics are solid and confident, even when towing a good-size trailer. Many of them will be bought for lifestyle and commuting, so customers will be driving them empty most days, and they want refinement, good handling and a comfortable, noise-and-vibration-free ride. 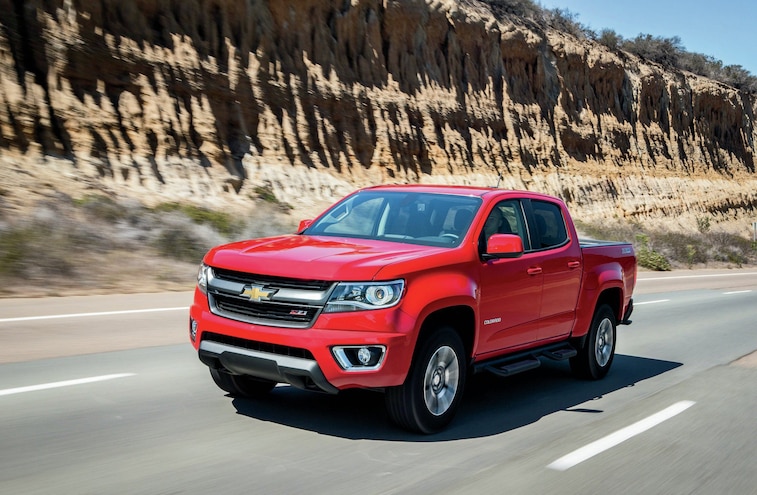 View Photo Gallery | 4 Photos
Photo 3/4   |   2015 Chevy Colorado
Might these trucks cannibalize some Silverado and Sierra sales?
Those looking for fullsize trucks are always going to buy fullsize trucks. They have specific needs. But not everyone needs fullsize capability, and those who don’t and are now driving Ford F-150s or Ram 1500s will be interested in these midsize trucks. GM is the only manufacturer now offering pickups for every customer’s needs: heavy duty, light-duty, and midsize. Midsize truck customers have very specific needs and priorities. They’re looking for something more maneuverable and parkable, and these are the right size to meet their needs.
Are these trucks very different from your international Colorado?
From a part-number-to-part number standpoint, there is little commonality because we developed each for its own market needs. The global truck was developed for Brazil, Thailand, Australia, and other countries where they are high-volume, and they don’t have fullsize trucks. But because the U.S. and Canadian markets have very specific customer needs, as well as safety and other requirements, this new Colorado/Canyon was developed for those needs. They have a different frame, and because fuel economy is key, we use a lot of different materials, such as aluminum knuckles and hoods, for example. We pulled from the fundamental learnings from our global midsize architecture and the engineering work done on our new fullsize trucks, and their strategy is very similar to that of our fullsize trucks. 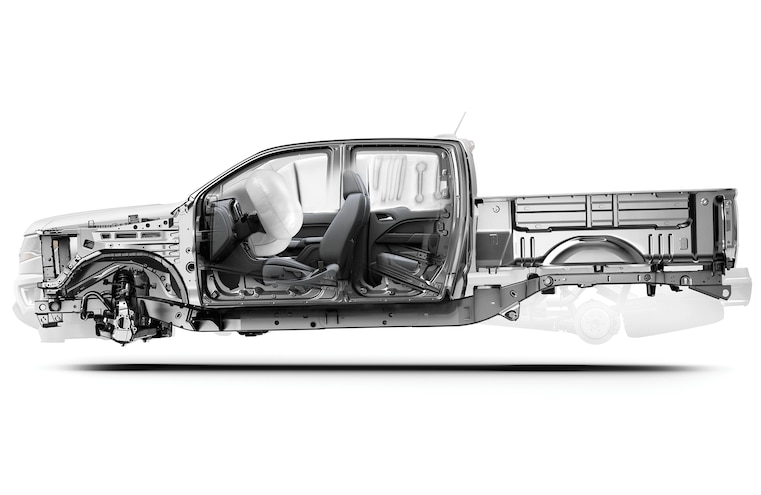 View Photo Gallery | 4 Photos
Photo 4/4   |   2015 Chevy Colorado Cutaway
The previous-generation Colorado and Canyon was not very successful partly because their price and fuel economy was not different enough from fullsize trucks. How has that been addressed for the new generation?
Fuel economy is key, and we’ve demonstrated segment-leading fuel economy with 18 mpg city, 26 highway for our V-6 and 20/27 for our four-cylinder. From a pricing standpoint, Colorado starts at about $21,000, including destination, and their average transaction price is around $28,000, so comparably equipped, the price gap between Colorado and Silverado is around $10,000. Our fullsize trucks have very specific capabilities to meet specific customers’ needs, where these midsize ones will be the right size for others at lower prices with exceptional fuel economy and fantastic towing and payload.
How are you feeling about media response to the trucks?
Fantastic! It’s been such a great opportunity to see these trucks evolve, and the only thing better than how they look is how they drive and perform. And now that not only media but also customers are driving them and seeing them on the road, it’s an absolutely fantastic feeling. We have spent a lot of time and energy focusing on the details to give customers what they expect and deserve, and now we’re seeing that these trucks really do speak for themselves.
How they are selling?
Dealer response out of the box was fantastic, literally off the charts. Chevrolet and GMC had received 30,000-plus orders as early as last July and August, and we added a third shift to our Wentzville assembly plant because of the excitement we saw as these trucks were coming to market. Our customers were just as excited to see them as we were.

- OF
By Gary Witzenburg
92 Articles