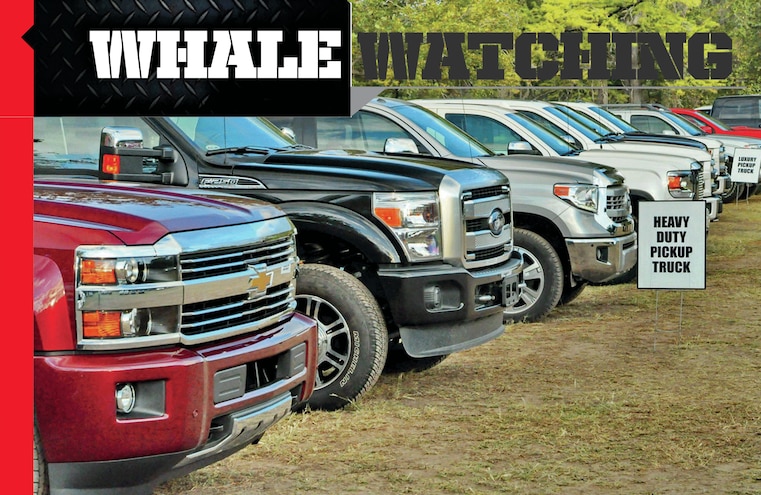 It was my TSA-driven mistake not to wear boots, but I should have. A week after Ford introduced the F-150 in San Antonio the Texas Auto Writers Association’s annual Truck Rodeo, Shiner-powered PR people let the Nissan rep challenge attending journalists to get the Frontier Pro 4X stuck. Soon after the Ram boss—whose inflection makes it difficult to determine if he’s calling the 6.4L a “big gas Hemi” or the “bigass Hemi”—reassured Nissan that when the writers did stick the Frontier, his Power Wagon winch would pull it out.
No one stuck the Nissan. No one needed winching. Analysts placed buy recommendations on Shiner.
The vehicle count was 75, though I don’t adhere to Washington’s definition of “truck.” The only missing entrant was the Titan, and Nissan instead handed out “#CUMMINSSOON” decals without commenting on which truck it referred to. However, every other ½-ton was there—usually in pimped-out and “off road” or more moderate trims—and most of the ¾-ton crowd too. That meant a great opportunity to drive F-150 and see if first impressions held up.
They did.

"The steel industry isn’t going to roll over and let those beer-can and wheel people steal a big chunk of their business."

It feels lighter and more agile. My butt felt the Tundra closest in feeling of lightness, and I better liked the Ram steering and empty ride comfort, though I suspect the Ram carried less payload on an as-equipped basis. The Silverado and Sierra felt heavier right down to steering effort, but that’s not an indictment—plenty of people prefer a hefty feel and the GMs carry plenty. So far, I’ve run into just a couple of negatives with the new F-150. First, less empty weight and equal or higher payload mean the suspension has to cover a wider range—they’ve done a good job tuning but that’s a tough obstacle to completely overcome. Second, the power-to-weight argument pushed at launch works empty, but load the lightest 3.5L EcoBoost truck with a 12,000-pound trailer and both horsepower and torque per pound fall behind a 6.2L GM pulling the same, and the GM has two more gears to work with.
Of course, like most maximums, that’s irrelevant. Informal polling says the average ½-ton owner tows 3,500-4,000 pounds and 80-85 percent of those that do tow pull less than 8,000 pounds. Assume 10 percent lied and the remaining 5 percent probably should have a ¾-ton.
However, lightness works for hot-rods, giving Ford a leg up in sport trucks. With little more than hand tools and a laptop, you could build a short-box regular cab F-150 3.5L turbo running Navigator’s 380hp/460 lb-ft tune and Navigator’s 4.10:1 gears. Then, take a leaf or two out of the packs, drop it all, and you have a 4,400-pound Lightning—probably with LED lightning-bolt puddle lights. 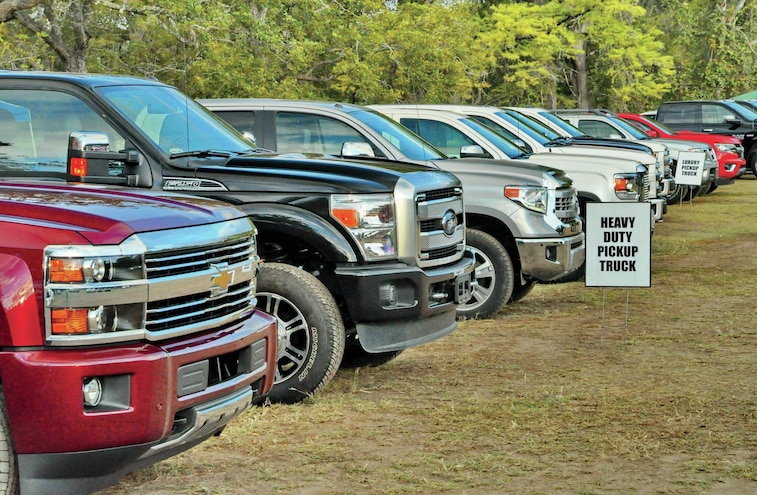 View Photo Gallery | 2 Photos
Photo 2/2   |   Late Model Trucks Lined Up
Of course, it wasn’t all rosy. Some analysts weren’t happy about Ford’s approach, claiming that aluminum doesn’t have the same strength reputation as steel, and despite the ’15 F-150 being more solid than any before, truck buyers aren’t about to let fact get in the way of opinion. Analysts voiced some concern about plant shutdowns for retooling, and cost is always a question.
More than a year ago, and before F-150 debuted, I wrote here that, “The steel industry isn’t going to roll over and let those beer-can and wheel people steal a big chunk of their business.” Regardless of outcome, you have to give Ford credit for making the change, both because of the truck they built and because it finally got Big Steel’s attention. Ever since the “aluminum F-150” was announced, engineers have told me they’ve been prodding the steel industry on materials for years, but there’s nothing like the number-one seller switching to awaken a sleeping giant.
Meanwhile, Sergio Marchionne opened another aluminum can of worms again asserting the next Wrangler could be made of aluminum, which could require a different assembly plant if—repeat if—converting Toledo for that process was too expensive. Now, Ohio, the greater Toledo area, and a lot of FCA employees like steel too.
It seems now that Ford versus Chevy has been supplanted by steel versus aluminum.