Piles of Beat-Up Parts, Wrapped in a 10-Second Duramax-Powered Van 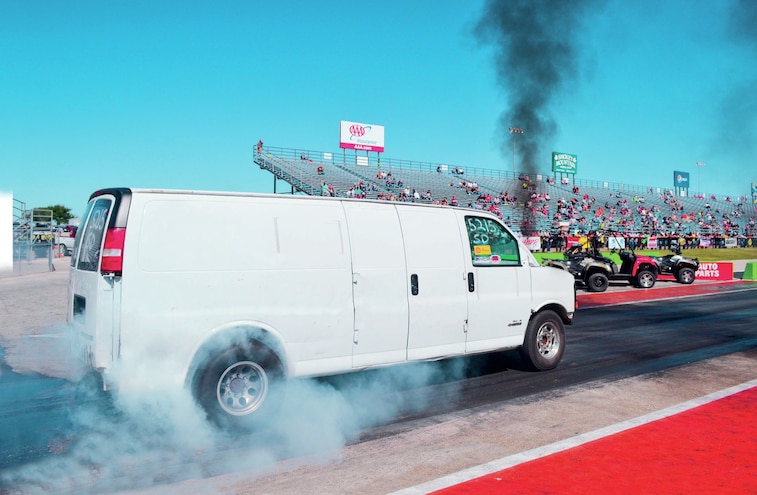 It could be that owner Josh Harris is from Van, Texas. Or, maybe, it’s the fact that Duramax-powered Chevrolet and GMC cargo vans are cheap these days. Well, regardless of what the actual reason is, Josh now owns what might be the quickest van of its sort in the world, and he certainly didn’t plan for it to happen back in 2010.

"“Nobody likes getting beat by a diesel...or a van.” —Josh Harris"

“It started as kind of a cool project to do with my dad,” Josh recalls of his initial idea to modify a beat-up ’05 Chevrolet Express van. “We wanted to go drag racing, and we were looking for a suitable vehicle to use, as well as a good engine and transmission. When a 6.6L Duramax LLY-powered van came up, we thought, Hey, why not? After all, those vans were equipped with 4L85E automatic transmissions, which are quicker shifting and use less power to drive than the Allison 1000s that were installed in the trucks.”
The van they found at a New Jersey auto auction was in rough shape and on its second trip around the used-vehicle bidding circles. “Whoever owned it before we did was hard on it,” says Josh. “The frame was slightly bent, the front fender was crushed, and loads were thrown into the van with such a force that it dented the body outward from the inside.” Despite the issues, they picked up the Chevy for the bargain price of $3,000, which is just about what the engine alone was worth. 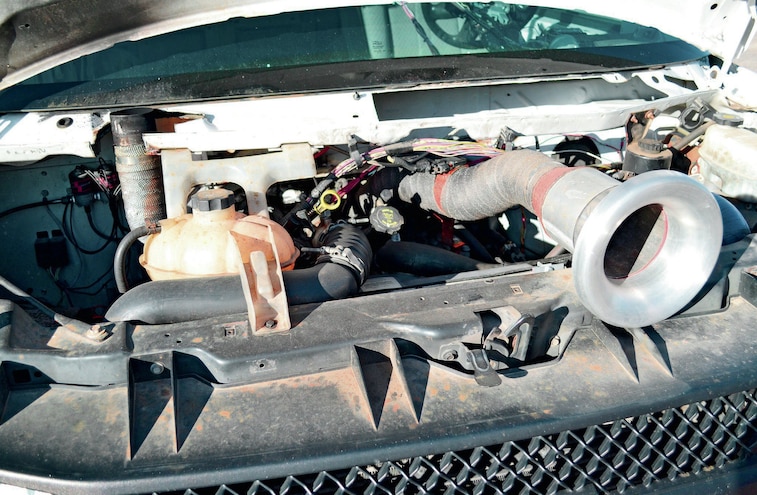 View Photo Gallery | 16 Photos
Photo 2/16   |   The stock 6.6L Duramax LLY engine is mostly obscured by the van’s body, but it’s in there somewhere. With only an EFILive tune written by Josh Harris and a lift pump, the engine puts out an estimated 500 rwhp on fuel, with nitrous oxide adding another 150 to 200 hp.
Although Josh considered immediately swapping the Duramax engine into a lighter vehicle, he decided he might as well see how fast the van could go. “We wanted to see what kind of power the 4L85E transmission could handle anyway, so we figured we might as well make the van go fast.” For starters, Josh knew from his previous racing experience that lighter weight meant quicker times and faster speeds on the dragstrip, so he started ripping virtually everything out of the van. “The headliner, all the racks, the seats, and most of the interior went into the dumpster,” Josh says. Lightweight OEM aluminum wheels replaced the heavy, steel originals, and the entire fuel system was ripped out and replaced with a fuel cell and 175-gph Quick Fuel lift pump. In the end, Josh took nearly 900 pounds out of his ride, dropping it from 6,400 pounds to a mere 5,500 pounds.
The stock Duramax was rated at only 300 hp, and the van hardly set the world on fire at the track, running 16 seconds in the quarter-mile. However, before Josh could add more power, the transmission had to be sorted out. “Not many people were running the 4L85E, so we had to kind of figure things out as we went along,” Josh remembers. Although the case is a 4L85E, a lot has been upgraded internally. “We probably made almost 200 passes the first year trying to figure things out,” explains Josh. What they came up with was a very unique combination of parts from a mixture of manufacturers.
The key to the whole transmission build is a Rossler valvebody, which has an integrated transbrake and supports extremely hard launches. The front drum was upgraded, and the input and intermediate shafts are billet. The output shaft is stock, however, and has held up despite years of use. The torque converter is also an interesting piece, built by Circle D Specialties with a mixture of Dodge and GM parts to get the stall speed low enough for the diesel engine. “The converter was the final key,” Josh notes. “It took us nearly a year to get it right, but after we did, the van immediately picked up four tenths.” The 4L85E has been nothing but reliable since that first year of trials and tribulations. 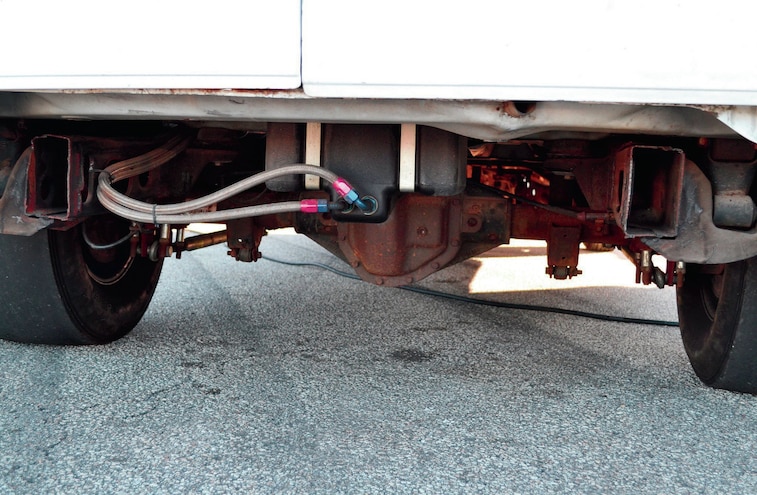 View Photo Gallery | 16 Photos
Photo 3/16   |   Since the van is a track-only ride, there’s no bumper in the rear, and the factory tank has been replaced with a fuel cell. Josh also skipped the usual lift pump route and went with a 175-gph Quick Fuel pump with a 60- micron pre-filter to keep it from clogging up.
Because Josh owned a built compound-turbo Duramax before he owned the van, he had already tinkered quite a bit with EFILive engine management and was more than ready to tackle the PCM programming on his own. After Josh wrote a tune with 3,000 microseconds of injector pulsewidth and 28 degrees of timing, the van was knocking on the door of the 11s, with completely stock engine internals. Since he planned on running in the National Hot Rod Diesel Association’s (NHRDA’s) 11.90 Class, he added a little bit of nitrous in order to run competitors down if he got a bad launch. After running an 11.75 on fuel only, the 10s became too irresistible not to try to reach. “I wanted to run a 10 at least once, just to prove it could be done with a stock engine,” says Josh. After a few low 11-second passes, Josh added a second stage of juice (with 0.62 and 0.53 jets), which made all the difference for pushing his rig to an unreal 10.86 at 124 mph.
Since then, The Dumpster, as it’s affectionately named, has been a hard-to-beat regular on the NHRDA’s racing circuit and has a few wins and runner-ups under its belt. It now also has more than 400 passes on it, and the valve covers have still never been off the engine. “I may swap everything over to something lighter eventually, but I’m just having too much fun with this thing,” Josh says. He’s also seemingly done the impossible, going from mid-16s to high 10s with only a tune, lift pump, some nitrous, a sturdy transmission and upgraded exhaust. “People just can’t believe how fast it is with a stock engine. At first, they laugh when they see it—that is, until I make a run. After that, they’re usually not laughing much anymore, especially if they’re in the other lane,” chuckles Josh. 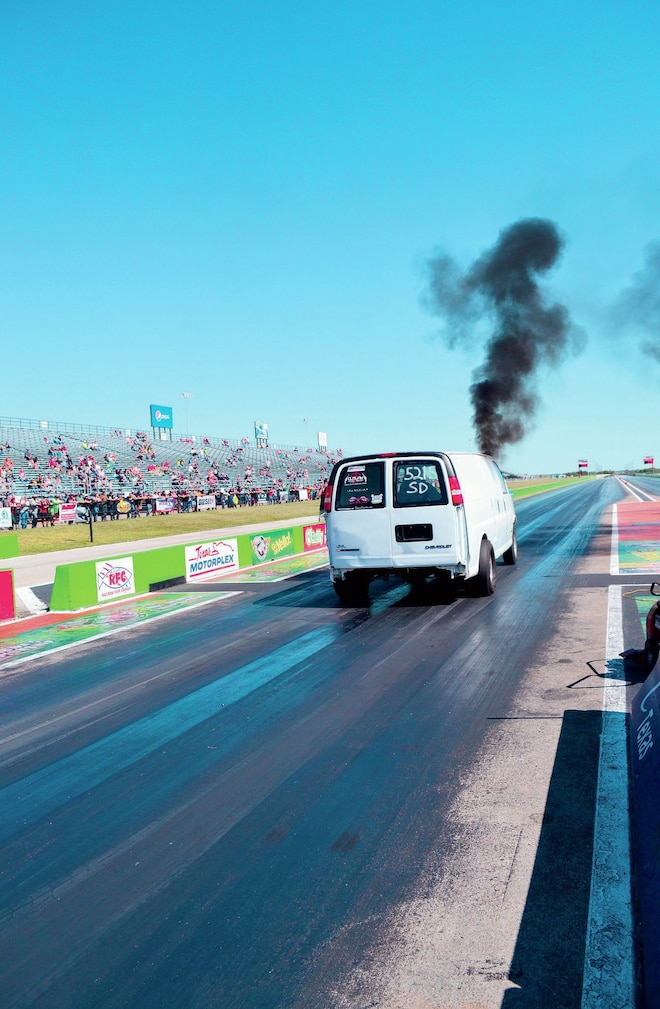